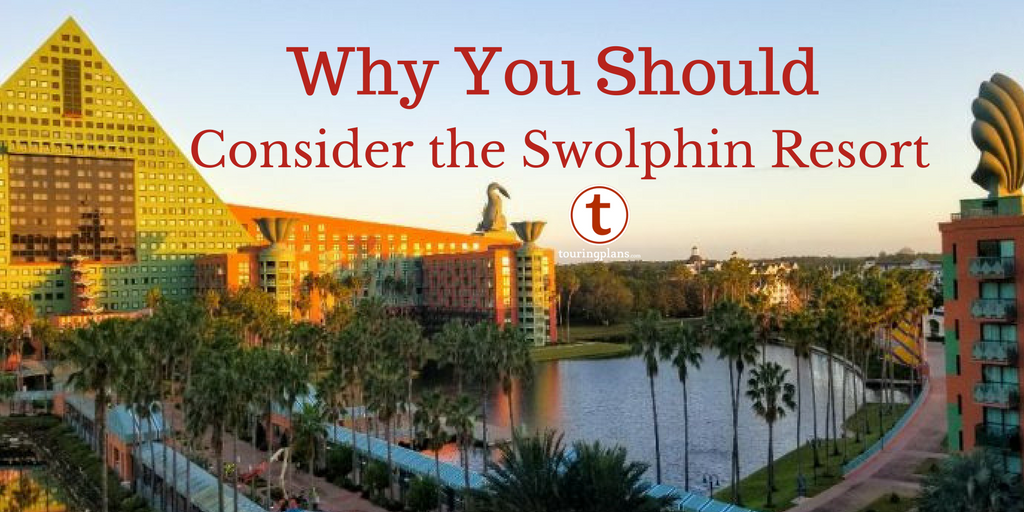 As you may be aware, in addition to the Disney hotels on Walt Disney World property, there is a non-Disney hotel complex that occupies prime real estate — the Walt Disney World Swolphin. (OK, I know that’s not a real place, but I view the Walt Disney World Swan and Dolphin as largely interchangeable hotels that share common resort grounds and amenities, so this nomenclature seems more appropriate.)  We’re often asked about this resort, with people wondering why someone would stay at the Swolphin rather than a “traditional” Disney hotel. As it turns out, there ARE good reasons, and I thought they were worth sharing.  Read on to find out more! First, let me give you the nuts and bolts of the properties.  The Swan and Dolphin are a pair of hotels designed by architect Michael Graves in the Crescent Lake area of Walt Disney World, in walking distance from both Epcot’s International Gateway and Disney’s Hollywood Studios. They are not owned by Disney and are currently part of the Starwood chain of hotels (Sheraton, Westin, W Hotels, etc.). For branding purposes, the Swan is considered a Westin, and the Dolphin is considered a Sheraton, but they share several amenities, like the pool complex and fitness center, and in practice might as well be one big resort. The Swan is slightly more compact, but apart from that distinction, the experience at both hotels is more or less the same, and my normal practice is therefore just to book whichever one is cheaper for my dates.  For more on the property, check out Steve’s recent overview of the Swan and Dolphin.

As a frequent Disney traveler, I have always lamented the fact that Disney doesn’t have any sort of rewards program like other hotel chains or airlines have where you get free nights based upon how often you go.  The Swolphin, as a Starwood property, is a notable exception.  This means that you get Starwood points when you stay there and, more importantly, you can USE Starwood points to book there.  The upshot of this, of course, is that if you travel a decent amount for work or pleasure and you’re a member of Starwood’s Preferred Guest program, you may have points that will cover or at least offset the cost of the room.  In fact, I have stayed at the Swolphin several times over the years, and only once have I actually paid for a room.

Recent developments in the travel industry opens this up even more.  Marriott recently merged with Starwood, and their reward programs have been linked. This means that Marriott points can be transferred and used to book at Starwood properties (and vice versa), and if you had status with Marriott Rewards, you now have equivalent status with Starwood. What’s more, the two program’s points can be combined (subject to some limitations), so if you have some points from both programs, you may now have enough to book a free trip by merging your balances!

If You Do Pay, It Can Be a Relative Bargain

In Walt Disney World lingo, the Swan and Dolphin are considered “Deluxe” category resorts. They do not, however, always carry the same price tag as Disney’s own Deluxe resorts, and you can often book at the Swolphin for less than you would pay at any other Deluxe resort, and occasionally FAR less than the short list of Deluxe resorts that allow you to walk to a theme park.  For example, picking a random long weekend in February of 2018, you could stay at the Swan for as little as $272/night (the Dolphin at the same time was $390). In contrast, the three Disney-owned Crescent Lake resorts ranged from $601-763 when I ran the numbers. One often overlooked aspect of the Swolphin is the quality of the amenities there.  For example, Stormalong Bay has a deserved reputation as one of, if not the best, pool on Disney property, but the pool situation at the Swolphin is no slouch and can hold its own with any other pool at Walt Disney World.  In addition to a traditional rectangular pool near the bar (which sort of serves as the unofficial “adult” pool), there is a kiddie pool, a large-ish shallow pool for small children, and a huge free-form pool with a large water slide and waterfall-covered grotto.  Yes, you can see the back side of water without waiting in line for the Jungle Cruise!

Some of the best, but least heralded, restaurants on Disney property call the Swolphin home.  What’s more, they tend to be relatively easy to get into, even on short notice, particularly if you go through the resort or restaurant directly as opposed to booking through Disney.  Dani did a great write up on the various food options at the resort a while back, so please take a look at that for more details.

The Dolphin also has evening child care right there on property.  Club Dolphin is a kids club on the ground level of the Dolphin resort, and like the Disney-operated Clubs, it provides a great place for your children aged 4-12 to hang out while you do more adult things.  While the theming is not as pronounced as it is at the Disney kids clubs, there is plenty of fun to be had there, and my daughter has loved it when we’ve taken her there. What’s more, if you are eating at bluezoo, Il Mulino New York Trattoria, or Shula’s Steak House or you are visiting the Mandara Spa, you can receive up to two free hours of time at Camp Dolphin (just bring your receipt to pick up). Otherwise, the cost is only $12 per hour, per child.  Reservations are required, but I’ve never had a problem getting them, even the day I intend to use the Club.

Unless you plan to spend the bulk of your time at the Magic Kingdom, the Swolphin’s Crescent Lake location is tough to beat. Two parks — Epcot and Hollywood Studios — are a walk or a quick boat ride away. Moreover, while Disney Springs probably hosts the best selection of high-quality restaurants on property at the moment, Crescent Lake can certainly hold its own in this regard. As mentioned above, the restaurants at the Swolphin are some of the best around, but you’re also very close to places like Flying Fish Cafe, Yachtsman Steakhouse, and Beaches & Cream, not to mention having easy access to the cavalcade of dining options at World Showcase through the International Gateway.  Add in a few unique options at Hollywood Studios like 50’s Prime Time, Sci-Fi Dine In, and Hollywood Brown Derby, and there is plenty of variety all easily accessible from the Crescent Lake area.

We pride ourselves on being objective here at TouringPlans, so in the spirit of full disclosure, there are a few reasons you might NOT want to select the Swolphin, particularly as compared to a Disney hotel:

Important Note for Uber Users Staying at the Dolphin: This isn’t really a caveat, more of an FYI for people that use Uber to get around the resort. For whatever reason, when you ask to be picked up at the Dolphin using Uber, the Uber app inevitably directs the driver to the entrance to the Swan. It happened every single time we called for an Uber on a recent trip.  The lesson, of course, is to let the driver know once they are on the way that you’re actually at the entrance to the Dolphin.

So, which one is better?  As I mentioned above, I think of them as a single resort, so my normal practice is to just stay at whichever is cheaper. With that said, if they were priced the same and I had a choice, I’d probably stay at the Dolphin. For one thing, the Dolphin, with its vaulted lobby and recent renovations, just feels grander in my opinion. More pragmatically, however, many of the shared amenities — the fitness center, the quick service restaurant (Picabu), the main pool, the kid’s center, the lobby bar — are all located at the Dolphin. The resort complex is large, and walking from the Swan to the Dolphin isn’t as easy as walking across the street. According to my Fitbit, I logged slightly over a half a mile walking from my room at the Swan, to Picabu to grab some breakfast food, and back on a recent trip. Over the course of a trip, that can add up.

With that said, guests at the Swan are somewhat closer to the Boardwalk area, so depending upon what you’re planning on doing, that might be a better fit. Ultimately, the difference is negligible, and I freely stay at both without a strong preference for either.

Tip: Use the Swolphin for a Quick Weekend Getaway

I’m actually just returning from a quick weekend getaway to Walt Disney World and, as is often the case for these quick trips, I stayed at the Swolphin. As I was leaving, I remember thinking, “Man, this place is perfect for a quick trip,” and it got me to consider WHY I favor the Swolphin for weekend getaways.

Part of it is that unlike a lot of Disney hotels, you can often get a room at the Swolphin with relatively little notice. The Swan & Dolphin often do not show up as having availability in hotel search results when you’re booking directly through Disney’s web site, but you can still book there going directly through Starwood’s site.  I’ve often wondered if this leads to greater availability to the extent to that it required an extra step that many travelers don’t bother to do, and, indeed, rooms can often be had on fairly short notice.  It makes the Swolphin the perfect place to stay for a last-minute trip, when rooms at Disney’s hotels can be scarce.

When it comes to a quick trip, however, less immersion in the “Disney bubble” isn’t necessarily a horrible thing.  For me, a quick weekend trip isn’t really long enough for me to become completely wrapped up in the magic anyway, so the relative lack of magic makes the transition away from and back to “real life” a bit easier to manage.  I prefer the bubble for longer trips, but for a quick trip, the Swolphin has just enough of the outside world to keep me grounded. I know it seems paradoxical to recommend a place for the absence of Disney touches, but for a quick trip, I actually kinda prefer it.  Your mileage may vary, of course, and I am 100% sure there are plenty of you that will disagree with me on this, but that’s my view on it.

So, what has your experience been?  Do you like staying at the Swolphin? Do you prefer one hotel over the other? Let us know in the comments!