You did a masterful job of packing for your trip to Walt Disney World. You brought everything you need. You’re off in the parks, enjoying your trip, then oooooh, you get that sinking feeling that something is not right. You had your phone/camera/jacket/hat/ticket right here and now it’s GONE. What do you do?

First, don’t panic. While not everything that’s lost at Walt Disney World is recovered, many, many mislaid items are returned to their rightful owners every day. Let me walk you through some of my “lost at Disney” experiences and tell you what happened and how we recovered.

In my recent post about packing for a Disney vacation, I mentioned that you should take a photo of the back of your park tickets and any travel documents. I can verify that this is a worthwhile tip because earlier this year, I did lose a park ticket. Luckily, I had taken a photo of the bar code on the back. I brought the photo, still on my phone, to the guest relations office at the park. They scanned the code and immediately printed me a new ticket. No questions asked. Easy peasy.

I was dining at Animal Kingdom‘s Restaurantosaurus, back when it was still a character meal. I had my camera out on the table so that it would be at the ready when Donald and Goofy stopped by to “chat.” Great fun was had by all. The meal ended and we left.

We walked over to Chester and Hester’s Dino-Rama, and I attempted to take some photos of my girls enjoying TriceraTop Spin. Ack, no camera. I realized that I must have left in the restaurant because we hadn’t been using it anywhere else recently. I ran back, described the camera to the hostess, and she brought it out to me a moment later. Whew, crisis averted.

On my most recent trip to Walt Disney World, my daughter lost her phone. We knew that she had it when we rode Test Track at 2:00pm because we used it to take photos on the attraction. When she went to use it at 3:30pm, when we were at UK pavilion at the other end of the park, it was gone. We had covered more than a mile of walking, so the phone could be anywhere. Since we were in World Showcase, we stopped by Guest Relations at the International Gateway. The cast member there told us that approximately every two hours, lost items from throughout the park are brought to the main Guest Relations office at the front of the park. She said that we should wait a bit longer and then head down there.

At 4:30pm we were at the main Epcot Guest Relations, described the phone to cast members, and within three minutes had it back in our hands. We had to fill out a claim form, verifying that we were reclaiming possession of the item, and then we were on our merry way again.

Return the Next Day

This particular scenario hasn’t happened to me, but I did learn from Guest Relations that if you lose something in the parks, but don’t realize it until the next day, your next step is to contact the central Lost and Found office, which located near the Transportation and Ticket Center. At the end of each day, the collection of lost items from each park is sent to this central location. You can also call central Lost and Found at 407-824-4245. It’s worth checking back several times.

It’s possible to lose an item at Walt Disney World even if it never leaves your room. A few years ago, against my better judgment, I let my daughter Josie bring Pinky on vacation with her. Pinky is her “lovey” – the most favorite stuffed bunny that she’s slept with every night since she was six months old. Having had experience with a lost lovey in another situation, I insisted that Pinky stay in our room at the Grand Floridian while we toured the parks. We came back to the room in the evening, and Pinky was gone. After ripping apart every crevice of the room, it became apparent that Pinky must have made her way out with the housekeeper.

My husband called the front desk and was eventually connected with the housekeeping manager. He explained the situation and learned that it is not uncommon for items left in or on beds to accidentally make their way into the hotel laundry when the sheets are being changed. We also learned that laundry at Walt Disney World is gigantic and centralized. The manager told us that it was impossible to know exactly when our particular load of sheets would be washed, but that it could take up to a week to make it through the system. Filters in the drying system are cleaned frequently of guest t-shirts, socks, and stuffed animals that were collected in error. We were told to check back.

And every day for a week, my husband called back the housekeeping manager. A full week later, Pinky was found in the laundry filter. Two days later, Disney FedEx-ed Pinky, looking a little hungover from her journey, to our home wearing a glamorous tiara and pink sunglasses, with a photo and note of apology from Cinderella. This was an honest mistake with, luckily, a happy ending.

In the inverse of the above situation, I purposely left something in my hotel room on a recent trip. I had attended Mickey’s Not So Scary Halloween Party. Part of my costume was a baseball cap that I knew we would never use again. It was in fine shape, so I left it out on the table in the room in hopes that it would eventually get donated somewhere.

I was home for a few days when I got a postcard from the Pop Century telling me that they had an item left in my room and that I could contact them to claim it. While I didn’t need the hat back, I felt good knowing that someone was looking out for me.

So folks, have I been unlucky to lose so many items at Walt Disney World, or lucky to have found them all? What have your experiences been with missing items in the parks or resorts? Let us know in the comments below. 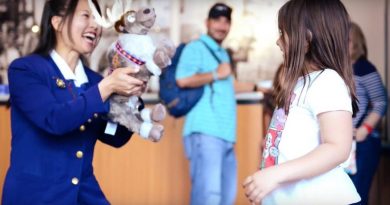 Get to Know the Disney World Transportation and Ticket Center (TTC)

38 thoughts on “Losing Your Stuff at Walt Disney World: What to Do When Something Goes Missing”