On Friday I was in the Magic Kingdom for its annual 24-hour event, and got to ride the new Seven Dwarfs Mine Train, the last part of the New Fantasyland construction project that began in 2010.

There are a lot of things to like about the Seven Dwarfs Mine Train. For one, it’s faster than I expected, but not so fast that it would frighten small children. Also, the ride track is much smoother than any comparable ride in the Magic Kingdom. This should be good news for both families and for seniors who want to avoid the rough ride of attractions like Big Thunder Mountain.

The outdoor queue is very pretty at night, with dramatic lighting and a background soundtrack that incorporates forest sounds such as chirping crickets. The interactive games in the queue, where you “sort” and “wash” gems on a horizontal screen built to look like a mine trough, are fun and easier for children to play than, say, those at Space Mountain.

On board the ride, the animatronic effects in the cottage scene at the end, which shows Snow White dancing with the dwarfs, is quite good. The animatronic Snow White’s movements are fluid, and the effect lets you believe she’s really “dancing” long enough to get you through that scene. While Disney has hyped the scene of the dwarfs inside the mine as the central show element, I think this scene is done better.

The other thing I really like about the ride is that it doesn’t try to tell you the entire Snow White story in 90 seconds; the ride ends in the middle of the narrative, with the evil queen about to knock on the cottage door. I think every other Fantasyland attraction tries to compress an entire story inside the ride, even when doing so has to sacrifice an important part of plot (I’m looking at you, Journey of the Little Mermaid). That’s a clever bit of storytelling, and the Imagineers who thought of it should design more rides.

That said, Seven Dwarfs is only the fourth best of the Magic Kingdom’s five roller coasters (counting Splash Mountain), and I’d give Seven Dwarfs Mine Train around 3 ½ stars on our 5-star grading scale. Here’s why.

First, the ride is short. If you exclude the lift hills and the time you spend creeping along in the central mine scene, I’m thinking there might be around 40 seconds of actual ride time, maybe a little more. If 7DMT is supposed to fit a niche between the Barnstormer and Big Thunder, the ride time is closer to Barnstormer. My cynical theory here is that Disney decided on the slow-motion ride through mine scene as an inexpensive(ish) way to pad out the ride to a reasonable length, instead of paying for more track.

Second, the swinging effect is much less noticeable than I would have thought. Riders in the front and middle cars may not even realize they’re swinging – it feels more like a set of really tight, banked turns. Families I spoke with after riding say the swinging is more pronounced at the back of the train, and you can ask Castmembers for those seats at the boarding area.

Third, there don’t seem to be many visual features to the ride. Unlike, say, Big Thunder, which has mine equipment strewn throughout the layout and gags placed in various scenes, the trip here doesn’t seem to have interesting artifacts or in-depth story references along the way. I mean, there are approximately eight bajillion public domain fairy tales set in German forests from which Disney could have pulled jokes or funny references for free, so lack of material isn’t the issue. I’m pretty sure this would be relatively easy to add, however, and looking for gags might make re-riding more enjoyable.

And while there’s a lot of colorful, sparkling gems in the mine scene, the dazzle only lasts for a few seconds before you realize there’s not much more to see. It’s a lot like the inside of the major show scene at Journey of the Little Mermaid, where Disney went with dozens of simple spinning animatronics rather than attempt anything sophisticated.

Sure, the projection technology driving the dwarfs’ facial expressions may be a solid technical achievement, but the dwarfs’ faces represents maybe 20 square feet out of a couple thousand cubic feet of space, and any subtle details there are lost.

Finally, it’s surprising that the ride experience is worse at night. While you get glimpses of the lighting effects at other Fantasyland attractions from various points around the ride, most of the area inside the ride boundary at night is just inky blackness. The queue lighting is vastly better and more nuanced, so perhaps the outdoor lighting isn’t yet finished? But for now, the nighttime visual experience is more more like Space Mountain (which is indoors, and in the dark), than Big Thunder or Splash Mountain.

Should you ride Seven Dwarfs Mine Train? Yes, if you can get a FastPass+ reservation or happen upon a short (ha!) wait. Most of the families I spoke to who’d been on the ride said that they’re be willing to wait maybe 30 minutes to re-ride it, but not more. That sounds like good advice to me.

Early last week we did a presentation to Furman University math students in class MXP-205 “Math & The Mouse: Explorations of Mathematics and Science in Walt Disney World.” These 12 students are in Disney for 3 weeks, along with 3 faculty members, covering the math, science, and operations research problems that tourists typically encounter in Disney World. The students are blogging about their class lectures and assignments here.

Our presentation, held in the posh Columbia Harbour House conference center (i.e., the upstairs dining room), covered the pros and cons of different algorithms for creating touring plans, the “big data” problem of predicting wait times at attractions, how the Least Expensive Ticket Calculator is an instance of the classic bin-packing problem, and how a system of linear equations can tell you the value of each component in the Disney Dining Plan. Our statisticians Fred and Steve then went in to much more detail about the practical problems faced when doing wait time predictions, and the tools we developed to check our results. Here’s a link to my presentation (PDF).

It was a lot of fun to talk in detail about stuff we work on behind the scenes. And it was also scary to see how much the students had already learned about these topics. One of the very first questions we got was on how we handled asymmetric walking times, i.e., when the ride’s entrance and exit were very far apart, such as at the Studios’ One Man’s Dream. That’s the kind of nuanced detail I would have expected from, you know, advanced grad students or commercial developers. The class’ professors, Drs Bouzarth, Harris, and Hutson, did a great job in teaching the background material for the class.

My MagicBand worked flawlessly on both trips last week, and my FastPass+ reservations were redeemed without a hitch. Disney’s website is much easier to use with FastPass+ now.

I had a couple of issues with the check-in process and with My Disney Experience:

That’s it for now. If you’ve experienced the Seven Dwarfs Mine Train, leave your comments on it below. 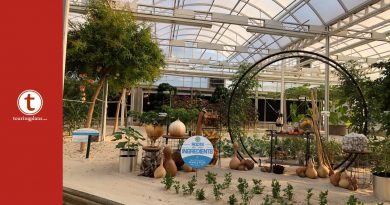 Everything You Need to Know About Living with the Land