Ever feel like some of your favorite Disney characters are underrepresented at Walt Disney World or Disneyland? Me, too! That’s why I’m starting a new series of articles here at TouringPlans Blog called “Disney Parks Potential,” where I’ll take a look at one Disney character or franchise that I feel isn’t being used to its Disney Parks potential (That’s where the name comes from!). From there, I’ll share my ideas on how I think Disney can best integrate these characters into one or more of the parks, which will then probably secure me a sweet job as a Walt Disney Imagineer if all goes according to plan. But enough about my unlikely career goals. Let’s get into my first Disney Parks Potential selection, which is The Incredibles. Outside of merchandise, character meet and greets and a dance party in Tomorrowland, The Incredibles really don’t have much of a presence in Walt Disney World. For a Pixar film that many would argue is the best of the bunch, this seems like a huge missed opportunity. The need for more of The Incredibles in Disney World is even greater considering that Disney isn’t allowed to utilize Marvel superheroes within the park due to the previous licensing agreement with Universal before Disney acquired Marvel in 2009. Hopefully we’ll get new attractions sooner rather than later now that a much requested sequel to the original film has been announced, but for now my ideas will have to suffice.

So what are my ideas, and where do I want to place them? I have two attractions in mind, and they’d both be located at Disney’s Hollywood Studios. Why Hollywood Studios? Because I think superheroes fit there better than the other three parks and because Hollywood Studios lacks a certain element that each of the others possess (I’ll go into this more later). My first idea is a moving 3D attraction similar to The Amazing Adventures of Spider-Man ride at Universal’s Islands of Adventure. Outside of Star Tours, Disney hasn’t really embraced moving 3D ride technology like Universal, so I think this potential Incredibles attraction could address a missing dynamic within the parks. Superhero parallels aside, there are scenes in the film that just beg to be translated into a thrilling attraction and make you feel like you’re saving the day like the previously mentioned Spider-Man. For instance, the scene where Dash runs on water for the first time would be an exhilarating experience. Just think if Imagineers could make park guests feel like they were also traveling at super speed. That’s the kind of attraction I want to see. As for the location of the attraction within Hollywood Studios, I have a few possibilities in mind. The first is Streets of America, which is located at the rear of the park. Besides the holiday season when they have The Osborne Family Spectacle of Dancing Lights, I think that area is underutilized and frankly kind of a waste of valuable space, which could definitely use a facelift. With the recent announcement that the Studio Backlot Tour is closing, that space will be available as well. My final proposed location would be in Pixar Place because I always thought it was weird to call an area Pixar Place when it only has one Pixar franchise (Toy Story).

My second idea for how to integrate The Incredibles into Hollywood Studios is an interactive park-wide “game” such as Sorcerers of the Magic Kingdom, Phineas and Ferb: Agent P’s World Showcase Adventure, and Wilderness Explorers. Hollywood Studios is the only park that doesn’t have an interactive game. Taking the Sorcerers of the Magic Kingdom as a basis for the idea, The Incredibles game would have park guests become the newest members of the “Supers” with Edna Mode acting as your Merlin to guide guests on how to play. Utilizing a variety of superpowers through the use of a provided device, players would have to go around the park stopping supervillains and saving citizens at interactive kiosks. Disney’s always been about making dreams come true and being a superhero is definitely a dream that kids everywhere have had at one point or another. Couple that with the lack of a park wide interactive experience and I think this is a no brainer.

That’s the end of our first Disney Parks Potential article but be sure to check back for further entries very soon. Until then, leave a comment about how great The Incredibles is or just say hello. Thanks for reading! 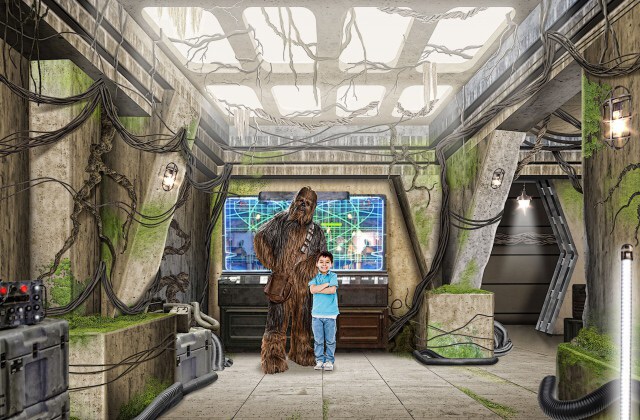 14 thoughts on “Disney Parks Potential: Why The Incredibles Needs A Bigger Presence In Walt Disney World”