Here I am again with more game reviews based off of different attractions found at Innoventions. If you missed my review of the Great Piggy Bank Adventure App, read that here.

These reviews are part of my new series, DIY (Disney It Yourself), where I explore different ways to enjoy Disney Parks at home.

As you’ll soon see, I experienced hits along with a few misses. First on the list: the Habit Heroes App!

The Habit Heroes app was introduced in the Apple App Store December 12th, 2012. It can also be downloaded via Google Play. It is based off the attraction of the same name, found at Innoventions East in Epcot. The app states:

The Habit Heroes mobile app is a comic book that chronicles the adventures of the healthy Habit Heroes as they clean up health hazards around the globe. Each comic book issue unlocks an interactive tool that helps foster healthy habits in your every day life.

The app requires iOS 5.0 and is optimized for iPhone 5. It is compatible with the iPad 2 + wifi & 3G (or later), but would not work with my standard second generation iPad, purchased in 2011. However, I was able to download the game onto my iPhone 6, so all was well….or so I thought.

This app would not work! When I clicked on it, it stayed stuck on the attraction logo. I went to the website and there was no game or even comic book feature to be found.

Here’s what Maddi had to say regarding the attraction and the app:

At Habit Heroes, the app is advertised on a poster in the queue. As you exit the attraction, you will be handed a card outlining the next steps of your mission. If you stop by the kiosk at the end of the attraction, the director of Habit Heroes will encourage you to continue your mission at home via the app. The Cast Member working the attraction specifically talked about the app with me but as it didn’t work, I wonder when the last time he played it?

It was disappointing that the app neither worked nor had been updated for some time. If you’re going to advertise an app that goes hand in hand with an attraction, it should at least work properly!

The Sum of All Thrills Sum of All Thrills is an attraction, found at Innoventions East in Epcot, that was introduced in October of 2009. It is presented by Raytheon and is featured as an interactive game on Mathmovesu.com. This game is not available as an app and requires a software download (Unity Web Player) before it can be played on the computer.

On the website, there are two activites to choose from. The first option is to design your own roller coaster, much like you would with the original attraction. You begin by choosing your vehicle: a bobsled, roller coaster or jet.

Next, you select four different tracks that will make up your personalized ride. The tracks range from a more mild experience to a wild and crazy coaster ride. You will need to test each track to see if your vehicle can successful complete the turn or hill. If you take a turn too fast, you could fly off the track. If you attempt a hill at too slow of speed, you won’t make it up. You have the options to adjust the speed of the vehicle and the height of your hills to further customize your experience.

After all four tracks are successfully working and up to “speed” (bu dum chee), you can name your coaster. After this, it’s time for your roller coaster to make it’s grand debut!

A small screen will appear where you can watch your roller coaster video. I couldn’t enlarge the video to make it full screen, and felt that took away from the experience.

After watching your video, you can choose to replay it, build another ride or post your video to Facebook.

Fellow TouringPlans blogger, Maddi Higgins, visited Sum of All Thrills attraction at Epcot to see how the website game was integrated. Here is what she had to say:

Upon entering the pre-show area for Sum of All Thrills, you’re handed a small paper card. During the pre-show video, the narrator says to bring the card home with you and promises “it’s worth keeping.” You keep the card with you during the entire attraction, using it to build your simulation and then to load it onto the ride system. The card has a website link and the code you will type in to load your game.

Hold on to that card because there is an option on the website to enter in that code to replay your roller coaster video. I thought this was a really neat perk and is a great way to relive your vacation memories.

I enjoyed how interactive the game was. Not only can you customize your own roller coaster, but I appreciate the brain power involved to determine the correct velocity and speed. I think it would be fun to incorporate this into a science or math lesson with middle school students, and I believe it successfully lays the groundwork for those wanting to experience the main attraction in Innoventions.

The second activity on the website is a game also called, “Sum of All Thrills.” It uses math skills to design the “ultimate thrill ride.” You can choose to play this game at a 6th, 7th or 8th grade math level.

The only directions on this game state: Click around to discover hidden math facts and earn even more thrill points.

You use the arrows on your keyboard to click different outdoor structures or items (such as an igloo, snow shoes and a kite). As you click on each item, it shares a bit of math and science trivia pertaining to topics such as geometry and kinetic energy.

There are three robots to click on as well. Each robot poses a different math question regarding the concept of building a roller coaster. The grade level you chose at the beginning of the game will determine how difficult the questions are to answer. Easier questions are multiple choice while harder questions require you to fill in the answer. Hint: Answering harder questions will result in a more wild ride experience.

Once you answer all three questions and click on all the structures, you are ready to view a video of the “ultimate thrill ride” you created.

Here’s the problem, the video wouldn’t play! I went through the entire game five different times and each time, the video never started. I have a MacBook Air and thought maybe it had something to do with my computer, so I tried my husbands Lenovo laptop. Sure enough, the same thing happened. Let me know in the comments if this happened to you!

The video problems aside, I was underwhelmed by this game. I appreciate the math questions as they encourage critical thinking and strive to make learning more fun. However, the game itself gives no variety. The bits of trivia are the same from game to game as are the math questions. I would chose to skip this one and design another roller coaster instead.

Have you played these games? What did you think? Let me know in the comments! 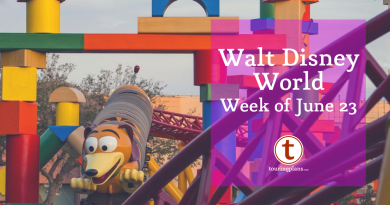 6 thoughts on “Disney It Yourself: Habit Heroes App and Sum of All Thrills Game Reviews”