This week’s SATURDAY SIX takes a look at Six  MORE “Easter Eggs” at the Universal Orlando Resort. One of our favorite parts of both Universal and Walt Disney World are all the wonderful details that make these fully immersive theme parks stand out from everyone else. In our first look at Universal Easter eggs, we saw a pair of actual Mickey ears on Twister….Ride It Out!, the Jaws references in Diagon Alley, Dennis Nedry’s Barbasol can in Jurassic Park and more. Today we are going to look at six more details that even guests who has been to Universal Studios Florida and Islands of Adventure several times may not have noticed. Remember that clicking on any picture will bring it up in full size, keep your head on a swivel, and let’s start counting down…

There is absolutely nothing we like better in new attractions then when they pay tribute to the ones that they replaced. We love the hidden Nautilus in the rock work of Under the Sea ~ Journey of the Little Mermaid at the Magic Kingdom, referencing the 20,000 Leagues Under the Sea ride that was formerly in the area. Revenge of the Mummy in Universal Studios Florida has several images of King Kong during the ride, a tribute to Kongfrontation. In 2008, The Simpsons Ride replaced Back to the Future: The Ride, but it actually created a backstory for the change and put it inside the queue.

The Simpsons Ride queue is one of the all time theme park greats. From larger than life theme park attraction posters spoofing Disney (including Captain Dinosaur’s Pirate Rip-Off: A ride so old it should be extinct!) and the new clips featuring the Simpsons (which hilariously take down subjects such as the high price of theme park food) and the two wonderful pre-shows inside the building, this is one queue you want to spend more time in, not less.

When Transformers: The Ride 3-D opened in 2013, it took the ride experience from The Amazing Adventures of Spdier-Man and brought it up to an “11.” But while we love its ingenious use of elevators and simulation of speed, one of our favorite parts of the entire ride is the small tribute to Bumblebee from Transformers Generation One (G1.) You see, while the Michael Bay version of Transformers may make a ton of money at the box office, many of us grew up and fell in love with the G1 Transformers. The good old days when Megatron transformed into a weird hand gun, Soundwave into a cassette player (Millennials world wide are scratching their heads) and Bumblebee into a Volkswagon Beetle. That’s right, at the end of the Transformers ride, keep your eyes open for the yellow Volkwagon Beetle with a cleverly placed piece of debris covering up where the Autobot symbol would have been.

With the entire Universal Orlando Resort being in a renaissance when it comes to food options right now (The Cowfish, Fast Food Blvd, Leaky Cauldron, Mythos, Tchoup Chop, and Red Oven just to start), it’s hard to justify a trip to Comic Strip Cafe in Toon Lagoon. However, this quick service location features one of the most fun details in either park. One of the walls of the restaurant faces the lockers used by guests for Dudley Do-Right’s Ripsaw Falls, and if you go in the restaurant you can see “inside” the lockers with several nods to Universal properties. Lockers for Woody Woodpecker (the official mascot for the Universal parks), the Blue Man Group, the Cat in the Hat, Beetle Bailey, and Spider-man can be seen, as well as one with more than a passing reference to Disney’s Finding Nemo.

# 3 – Characters from Star Wars, The Simpsons, The Office, 3rd Rock From the Sun, and more in MEN IN BLACK: Alien Attack. (USF)

One article anyone planning a trip to Universal needs to read is our “Secrets” of the Universal Orlando Resort, and one of those secrets is a tour of the Immigration Room at MEN IN BLACK: Alien Attack. Besides being able to explore what almost looks like the set of the original Men In Black film, you will also see many little details hidden in the room. One of the main plot points of the MIB movie is that aliens have been traveling to Earth for years, many of them hidden among us. You will see paperwork for several aliens including Admiral Ackbar from Star Wars: Return of the Jedi, Kang from The Simpsons, Creed Bratton from NBC’s The Office, Dick Solomon from 3rd Rock From the Sun and more.

# 2 – A Giant Skeleton Hanging in the Islands Trading Post (IOA)

Talk about hiding in plain sight. Even though it seems impossible to miss a GIGANTIC skeleton of a mythical creature hanging from a ceiling, many guests to the Islands Trading Post (the main gift shop at the front of Islands of Adventure) do not notice it. Nor do they see the large plaque behind the registers explaining the species. This is just one of many unbelievable details inside Port of Entry, pound for pound the best “Main Street” inside any American theme park.

Believe it or not, that’s not the only humongous skeleton in Port of Entry. Inside Confisco Grill there is a Triceratops skull hanging from the ceiling. The backstory of Confisco Grill is that it houses items that were confiscated from travelers of all various “islands” in Islands of Adventure, so throughout the restaurant there are artifacts from each island in the park (Marvel Superhero Island, Toon Lagoon, Seuss Landing, the Lost Continent and the Wizarding World.) The triceratops skull came from, you guessed it, Jurassic Park.

When Universal Studios Florida made its debut in 1990, one of the opening day attractions was Earthquake: The Big One. Over the years the ride has morphed into the Disaster! A Major Motion Picture Ride…. staring YOU! but originally the attraction was completely based around the 1974 film Earthquake starring Charlton Heston. Richter’s Burger Co. is the quick service restaurant located in the San Francisco area of USF, right near Disaster, and is themed to the great 1906 earthquake. That particular earthquake killed around 3,000 people and was estimated to destroy over 80% of San Francisco. One of the more visually striking results of the earthquake was the upside down statue of the geologist Louis Agassiz. The statue was originally on top of Stanford’s zoology building, but was toppled over and planted head-first into the ground. Richter’s has recreated the statue and placed it at the entrance to the restaurant, full size to boot!

There are several references to the actual statue in California on the walls of Richter’s Burger Co.

It is worth walking through Richter’s if only to see the era-appropriate theming on the walls (although it also contains a reference to Back to the Future’s Doc Brown, tying back to our original Easter egg.)

So there you have it: Six MORE “Easter Eggs” at the Universal Orlando Resort. What we love about this series is that it may never end. We still have wonderful details such as Matt Groening in Springfield USA, Steven Spielberg in MEN IN BLACK: Alien Attack, and many mores surprises in future articles.

The Six Most Underrated Attractions and Shows at Universal

Special Thanks to crack staff photographer Brandon Glover, master photo manipulator Matt Cleary, My Face on a Figure’s Brandon Balasco, and Megan Stump for their invaluable assistance with this article. It may take a village to raise a child, but it takes an entire country to get one of these articles done. Be sure to also check out Brandon on The Park Blogger podcast with co-hosts Aengus Mackenzie and Brian Carey. 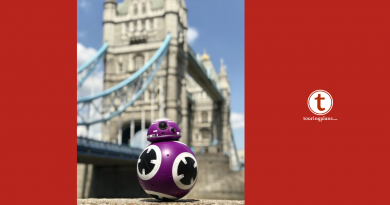 10 Things To Do With Your Custom Disney Droid