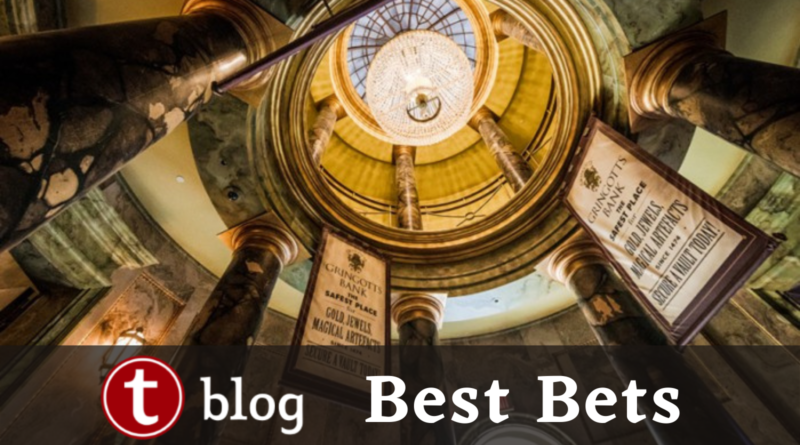 There’s a very good argument to be made for the queue being the best part of a theme-park attraction – yes, even more than the ride experience itself. It is the portion that builds up the anticipation, that sets up the narrative, and that transitions you from one slice of reality to another – in other words, it’s the equivalent of Christmas Eve, priming you for all the wonder that is about to unfold the following magical morning.

Universal has made queues into something of an art form, deepening their amount of immersion, heightening their fidelity to the source material (if applicable), and, even, playing around with the very concept of what a line should – and could – be. Along the way, the company also manages to stuff an impressive amount of Easter eggs into the proceedings (such as Fast & Furious – Supercharged’s homages to its attraction predecessors) and, at times, a suitable amount of humor (Shrek 4D and The Simpsons Ride, we’re looking at you).

Even though Universal Orlando Resort may offer a stiff level of competition in this department, there are still four experiences that stand out above all others, for one reason or another. We’re going to dive into each of these now. 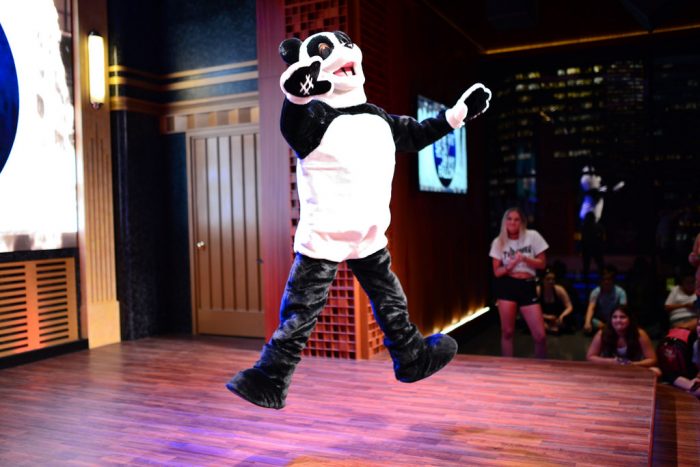 What makes Race Through New York Starring Jimmy Fallon’s queue so notable – and what secures its spot on this list – is its very premise. Two different rooms, spread across two different floors, hold a veritable treasure chest of items for you to take in as you see fit; they act more as holding pens than as a strict, clearly defined line for guests to shuffle through. It all starts with a type of museum dedicated to the 67-year history of The Tonight Show, collecting various props and costumes from the six different hosts’ tenures – along with a clip reel showcasing the best of each (including Fallon himself, of course).

Once you’ve had your fill (or once your boarding group has been summoned, depending upon the operational standards of that particular day), you make your way upstairs to the real heart of the experience. Here, you have a plethora of options to choose from: play an assortment of Fallon games, meet-and-greet with Hashtag the Panda, watch a compilation of jokes and songs from recent Tonight seasons, or – our personal favorite – take in a live performance of the superb Ragtime Gals, the show’s barbershop quartet.

(And even if all this somehow weren’t enough to justify Race Through New York’s presence on this pantheon, then its preshow video certainly would: having The Roots rap their way through the ride’s health precautions makes it the single greatest safety spiel in theme-park history.)

3. Revenge of the Mummy

Dark, atmospheric, and just a tinge of creepy, Revenge of the Mummy offers a queue unlike any other – yes, even the more modern, bigger-budgeted affairs that otherwise populate this roster.

First, there is just a quick jaunt through some film props and conceptual drawings for the fictitious Revenge of the Mummy movie, which is purported to be the latest installment of the 1999 Mummy franchise. It’s more of a small prelude to the main action than anything else, but it’s where riders are warned of a curse that seems to be plaguing the production – and also where they get the set-up to one of the most legendary lines of dialogue to ever close out an attraction, which, of course, stars Brendan Fraser and an innocuous-seeming cup of coffee.

Then there is the real heart of the thematic matter: the catacombs of an ancient Egyptian tomb, where the crew is filming and where you are plunged into darkness (seriously – be sure to keep your cell phone handy, as you may need it to light the way until your eyes adjust). The ominous music, dilapidated pillars, and larger-than-life statues both dominate and immerse you, bringing the Mummy experience to life in an incomparable way. And the icing on the atmospheric cake is a handful of surprises hidden along the way, including an interactive artifact that requires two people to pull off its effect successfully and a hidden alcove where the bravest can insert their hands for a simple-but-effective trick.

2. Harry Potter and the Forbidden Journey 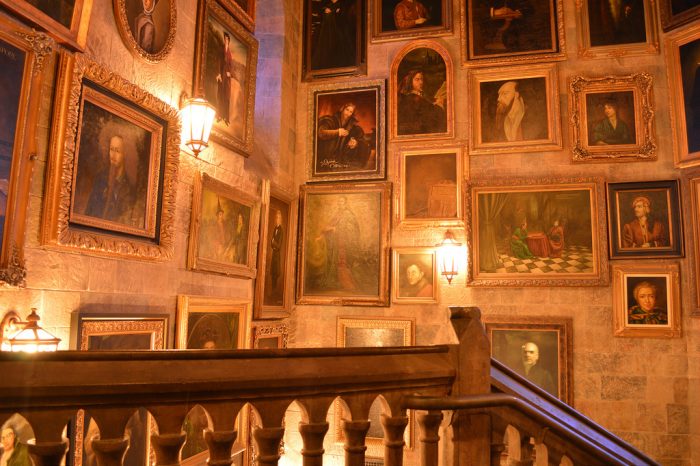 On the one hand, including Harry Potter and the Forbidden Journey isn’t fair – recreating Hogwarts Castle, one of the most iconic structures in all of filmdom, probably gives both this attraction and its queue an immediate leg up on all the competition.

On the other hand, however, the sheer craftsmanship that Universal employed in its construction is quite evident, and it makes the resulting experience simply soar, no matter its familiarity. The corridors are lovingly sculpted, as are many of the familiar objects that Muggles will come into contact with, such as the Mirror of Erised and Professor Dumbledore’s griffin statue. The greenhouse and Defense Against the Dark Arts classroom are intricately detailed; the talking portraits are fun and immersive; and cameo appearances by some of the Harry Potter movie series’s heaviest hitters are the final touch on fully submerging you in the world of Hogwarts School of Witchcraft and Wizardry.

If one were to take in every variation of every conversation that the various paintings and actors provide, it would take her some 25 minutes to get through it all – no wonder, then, that Universal offered, for many years, a “castle tour” that allowed guests to simply lounge around in the queue for as long as their hearts desired, soaking in all the glorious theming.

1. Harry Potter and the Escape from Gringotts 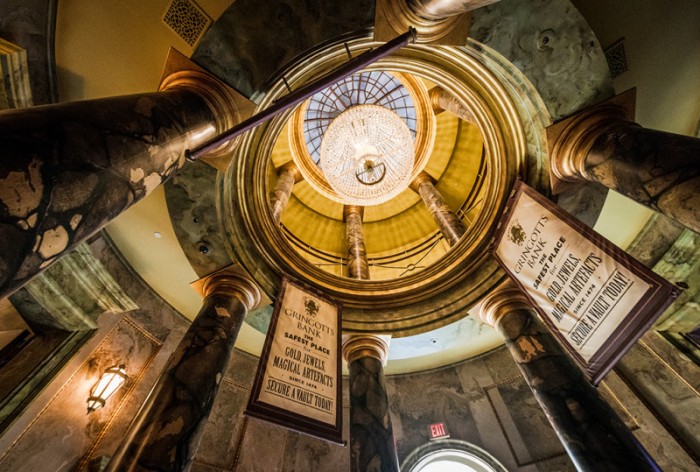 It is incredibly difficult to surpass Harry Potter and the Forbidden Journey, but leave it to another ride dedicated to the Boy Wizard to do just that.

The queue of Harry Potter and the Escape from Gringotts can best be summed up as an adventure. A grand entrance hall filled with audio-animatronic goblin tellers and massive chandeliers (which feature a combined 62,000 crystals) and a short elevator ride that takes you deep under the Earth may be the twin highlights of the proceedings, but there is so much more – sample bank vaults that are on display, newspapers strewn about with vividly rendered moving images, portraits and impressive suits of goblin armor to gawk at, and one of the most exquisitely constructed sets in all of Universal Orlando in the form of Bill Weasley’s office dot the experiential landscape.

It can all be a bit much to take in, and, in fact, this is the one (comparative) drawback to Escape from Gringotts: the minutes-long odyssey can be daunting when all one wants to do is quickly hop on the attraction and go for a subterranean spin. Luckily, there’s the single-riders’ line, which helps shave off some time, but the absolute spectacle and majesty of Gringotts Wizarding Bank is always impressive, no matter the circumstances.

Do you have a favorite queue at Universal Orlando? Let us know what you think in the comments.

One thought on “4 Best Queues at Universal Orlando”