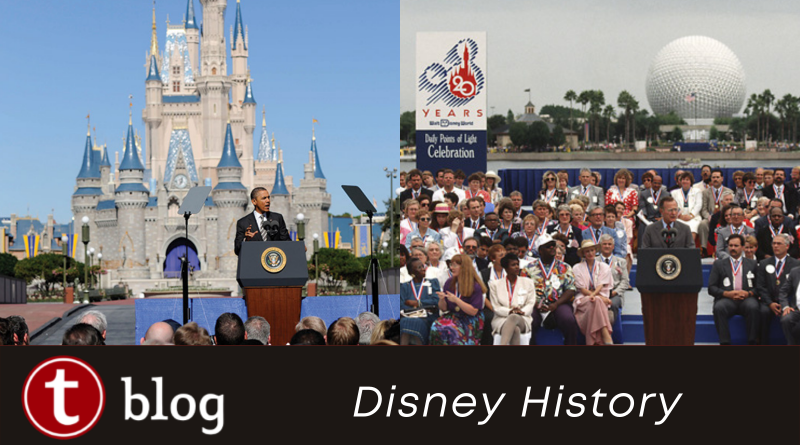 When asked about his own political ambitions, Walt Disney answered, “Why be a governor or senator when you can be king of Disneyland?”Great answer. And a great point.

But that’s not to say Walt Disney or the Disney Parks have stayed out of political history. After all, both Disneyland and Walt Disney World have attractions about our nation’s leaders, and the parks themselves are encapsulations of Americana. In addition, a surprising number of our Presidents have made visits to Disneyland, Walt Disney World, and sometimes both through the years.

So to celebrate Election Day here in the United States, let’s take a look back at the Presidents who left the White House for a visit with Mickey Mouse.

The first President to actually visit a Disney Park was Harry S Truman. However, he never made it to Disneyland during his Presidency since it didn’t exist yet!

It wasn’t until 1957 that he and former First Lady Bess Truman visited Disneyland and reportedly experienced most of the park’s attractions from that time period except for one: Dumbo the Flying Elephant.

Yes, Truman refused to ride Dumbo as he thought it would be a bad look for a Democrat to be pictured riding an elephant – the symbol of the Republican Party.

Even though Dwight D. Eisenhower was the President when Disneyland opened in 1955, he and his family didn’t visit Disneyland until the 1960s. To their credit, they then visited twice both in 1961 and 1963.

It’s also worth mentioning that Disney and a few of his animators had a hand in creating a super catchy animated campaign commercial for Eisenhower in 1952. The “I Like Ike” campaign is still one of the successful in Presidential History.

If Nixon has a redeeming quality, it may be that he loved the Disney Parks.

In fact, he and his family were the first guests to experience this iconic form of Disney transportation; but as the legend goes, Nixon’s secret service agents weren’t informed about the second lap Nixon’s daughters begged for. Imagineer Bob Gurr who piloted the monorail on that day recalls seeing the agents seen running down the platform of the station trying to catch up!

Nixon went to Disneyland again in 1961 and 1968, and he was the sitting President when Walt Disney World first opened in 1971. But his success at Disneyland didn’t extend to Walt Disney World. While participating in a televised Q&A in the Ballroom of the Americas at the Contemporary Resort, it was here that Nixon said, “I’m not a crook.”

In 1978, Jimmy Carter attended the 26th World Congress of the International Chamber of Commerce meeting held inside the Magic Kingdom. In 1982, after having left office, Jimmy Carter enjoyed a morning run through an empty Disneyland Park while on property attending a convention at the Disneyland Hotel. If this event didn’t inspire runDisney events, it should’ve.

Ronald Reagan has played a huge role in Disney history not once, but twice! In 1955, Reagan was the co-host of ABC’s live coverage of the grand opening of Disneyland! Then, as the governor of California, Reagan worked with the Disneyland Resort; but it wasn’t until his Presidency that he made Disney history yet again.

Reagan visited EPCOT as President in 1983; but in 1985, a portion of Reagan’s second inaugural celebration was actually postponed due to dangerously cold temperatures and rescheduled to be held at EPCOT! Yes, instead of performing in frigid Washington, D.C, the President’s Inaugural Bands Parade entertained guests in a procession around World Showcase with President Reagan and First Lady Nancy Reagan in attendance.

After Reagan left office in 1989, he then officiated Disneyland’s 35th anniversary in 1990 having played a part in introducing the park to Americans back in 1955. Talk about full circle.

George H.W. Bush visited Disneyland in 1988 was President Reagan’s Vice President. After he himself became President, he too visited EPCOT for the first Points of Light ceremony at the America Gardens Theater at the American Adventure in 1991.

Even though both Bill Clinton and George W. Bush visited Walt Disney World during their presidencies, they never actually went inside the parks. Bill Clinton actually visited the Disney Institute in 1996 while George W. Bush delivered speeches at both the Contemporary Resort in 2003 and then the Grand Floridian Resort and Spa in 2006.

Are you surprised by how many Presidents have visited the Disneyland Resort and Walt Disney World? Let us know in the comments!

3 thoughts on “A Look Back at the U.S. Presidents Who Visited the Disney Parks”