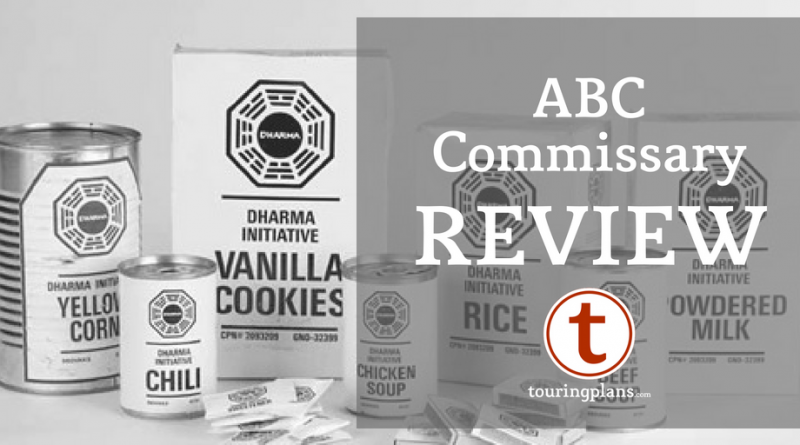 Eating at Disney’s Hollywood Studios, especially for quick service options, has always been a challenge for my family. To put it bluntly, compared with other parks, the Studios is culinarily challenged. Part of me wonders if this is partially due with a desire to have people try out the well-themed sit-down restaurants. When it comes to theme, it’s hard to beat 50s Prime Time Cafe and Sci-Fi Dine In. But sometimes you need a quick meal on the go. In the past, my family’s default place to go was ABC Commissary, largely because it has air conditioning. Unfortunately, the lunch menu is the textbook definition of uninspired. Recently, my family was in the Studios for a quick evening out, and because we had no plans, we decided to stop in for dinner at ABC Commissary. Our experience was not horrible–but was it good? Read on to find out. Whether you visit the Commissary for lunch or for dinner, like most quick service locations, you will go up to the counter and place your order. Unlike lunch, after placing your order and paying for your meal, at dinner you receive a locator gadget and then are asked to find a table to wait for your food to be served. Speaking as someone who has had to wrangle a child and trays of food with way too many drinks through a crowd of people trying to get to a table, I love the idea of having food brought to me. While we sat down and waited for our food, I also noticed that the tables are cleared as you leave–no trying to find a trash can without spilling your tray on the way. A moment or two after sitting down, a server came by our table to make sure we had placed our locator device on the table, and brought us “silverware” wrapped up in a napkin. Because the plastic fork, knife, and spoon were silver-colored, for a brief moment we thought they had switched to actual silverware. No such luck, but using the higher-end plastic ware is a nice touch.

For our meals, my husband ordered the Chimichurri Steak with steak fries and fire-roasted corn. My daughter wanted a beige food night, so she ordered the adult shrimp, fish, and chicken platter. As I wasn’t too hungry, I took the kids’ meal option that my daughter wouldn’t eat and got the salmon with couscous and green beans. The meals all came out promptly and were warm (for the kids’ meal) to hot (for the fried foods).

First up, the Chimichurri Steak. The steak was cooked just shy of medium-well, but was tender enough that it was easy to cut with the plasticware. The steak fries were your average fries, but they were…slightly sweet. After a few rounds of licking the fries to try and identify the seasoning used on them (hey, we’re high class people when it comes to food analysis!), we figured out that it was BBQ seasoning like you’d find on BBQ chips. At our table, we were split into three camps–our daughter didn’t like it, my husband didn’t care, and I thought it was pretty tasty. The fire-roasted corn was a wonderful side, but it did seem odd to have two starches on the plate (corn and potatoes). We all agreed that the dish would be much better if it had the green beans instead of the fries, and that’s what we’d ask for next time. The Chimichurri sauce was very flavorful, and had a surprising amount of heat for a Disney dish. If you don’t like spicy foods at all, this would be a dish to skip, but if spices don’t bother you, it’s a solid meal (once you get past the $18 price for a quick-service steak of about 4-5 ounces).

Next up, the other adult meal–the chicken, shrimp, and fish platter. The meal came with a token scoop of coleslaw (shown next to the container of cocktail sauce for reference) and the aforementioned BBQ-flavored steak fries. Overall, my daughter loved the shrimp which were crunchy and had a good flavor. The chicken strips were the Disney chicken strips that you all know and (probably) love. And then, there was the fish. The outside of the fish had an almost translucent quality to the batter–and one bite into it, we figured out why. Although the fish was cooked through and was your typical flaky whitefish, the outside wasn’t fully crispy. This left a layer of uncooked batter between the outside crust and the fish inside. Although that’s not unusual for fried fish, this was enough that I could have scooped it off and filled the empty coleslaw container with what was on the two fish. Needless to say, that’s part of the meal we did not finish.

Finally, there was the kids’ meal of salmon, couscous, and green beans. Overall, this was the best value for the money. The $8 meal included a 2-3 oz. portion of salmon, a large helping of couscous and of green beans, and a child’s drink. Although none of the food had stand-out flavor (which is a good thing for a kids’ meal), the food was cooked properly and the salmon was quite tasty. The only negative that I have about the dish was that the couscous was a bit dry and clearly had been made in a mass quantity to sit in a steam tray until serving. It was still edible, but wasn’t as good as the other items with the meal. I do applaud Disney for making some good options available for a healthier meal beyond the beige foods.

In the end, would I eat there again? I’d rate it as a guarded yes–I would certainly get the salmon again (either the kids’ version if my daughter was eating the adult meal or the adult portion, which has a lemon pepper flavor), and there’s a few other interesting items on the menu. It was a very relaxed meal not having to juggle trays, and it was relatively uncrowded compared to the rush of people that I’ve seen at lunch. It’s not going to wow your socks off, but it will provide a decent quick service meal in a park where quick service dining options are not the best. The atmosphere of the restaurant is pleasant, with indoor palm trees and some display cases with items from ABC shows. And did I mention air conditioning? I did? Well, summer is coming up, so I’ll mention it again–there’s air conditioning. ABC Commissary is located along Commissary Lane in Disney’s Hollywood Studios. Adult entrees range from $10-19 for dinner, and the Disney Dining Plan is accepted (1 quick service credit per meal). Mobile ordering is available for both lunch and dinner. It scores a 77% rating with TouringPlans readers, and is rated as a B- for value, with fair quality.

Have you eaten at the ABC Commissary? What do you think? Let us know in the comments.

One thought on “ABC Commissary Dinner: Worth a Try or Lost Cause?”