The August Crowd Calendar update is now live. Since the last update, Disney made some moves that have influenced our crowd level predictions.

New Discounts for the Fall

We expected discounts and special offers would be a rare beast after Star Wars: Galaxy’s Edge opened at Hollywood Studios. Well, in July Disney announced Free Dining and room discounts for September – December 2019. This is a strong sign that hotel bookings were lighter than expected.

Rise of the Resistance Opening Date

The big flagship attraction at Star Wars: Galaxy’s Edge, Rise of the Resistance, will open in Florida on December 5, 2019. We have learned at Disneyland that people do not rush to visit an incomplete Galaxy’s Edge, so we expect that December 5 is when the flood gates will open for the Star Wars crowds.

Putting It All Together

The July announcements make us believe the crowds this fall will be lower than initially predicted. In general, you should see a slight decrease in crowd levels in September, October, and November.

Once the holiday parties start, Magic Kingdom has big swings in crowd levels. Party days will have below-average crowds. Days in between the parties will have above average crowds. The more parties in a week, the bigger the swings will be.

Operations at Hollywood Studios are not going to be normal. Once Star Wars: Galaxy’s Edge opens, everything will change. The park will open at 6:00 a.m. on August 29-31 and at 6 a.m. for 3 hours of Extra Magic Hours starting on September 1. FastPass+ tiering will force more people into the standby queues. With all the changes, our statistical models will most likely change as they adapt to the behavior of guests under the new conditions. Regardless of the crowd levels, Star Wars: Galaxy’s Edge is going to be crowded. Avoid Galaxy’s Edge between 10:00 a.m. and 3:00 p.m.

The every day Morning Extra Magic Hours are going to give on-site guests an opportunity to ride Avatar Flight of Passage without long waits. Offsite guests are doubly penalized: offsite guests are unlikely to get a FastPass+ reservation 30-days prior to arrival, and they won’t be able to enter before the park opens. The early opening times will likely make the crowd in the evening lower than normal. 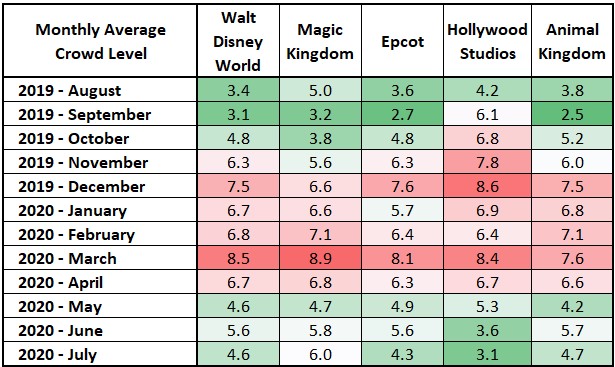 Monthly patterns are not going to change much. Thanksgiving, Christmas, New Year’s, and Spring Break will have the highest crowds. Even with Star Wars: Galaxy’s Edge open on August 29, September will have the lowest crowds of the year. September 2019 will be more crowded than Septembers in the past.

The further out we look at the Crowd Calendar, the more uncertainty there is. As we observe more days with the changes at Walt Disney World, our models will work better. We believe crowds have been lower than average because people have postponed their vacations for the opening of Galaxy’s Edge; for that reason, Summer 2020 will have higher crowds than 2019.

How are you feeling about all the changes coming to WDW? Will anything change your touring strategy?