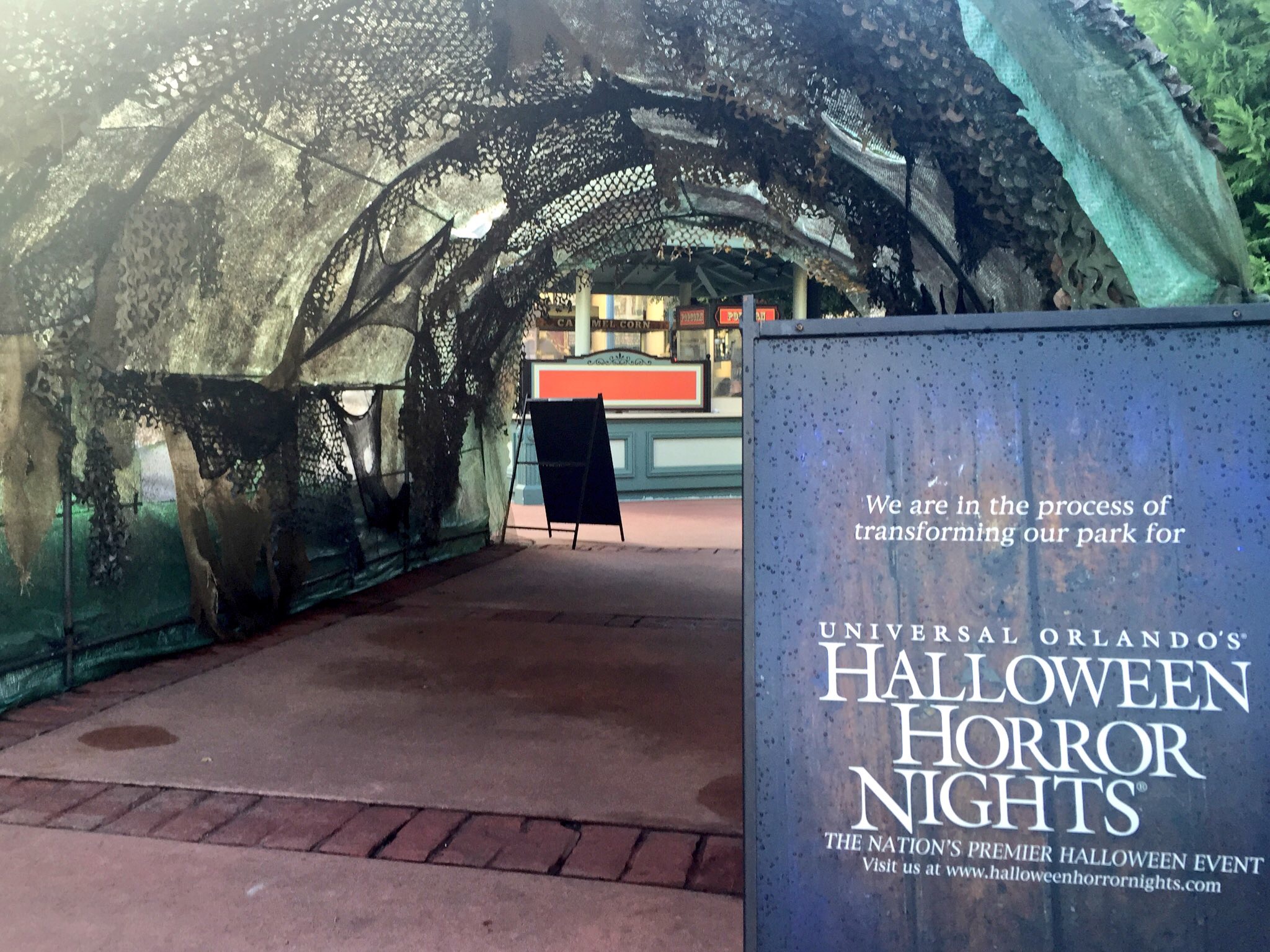 Fall is finding its way, slowly sneaking out Summer. Yes, we do have a Fall season here in Florida. It is different than the rest of the country, but it is there. Scallop season gives way to snow crab season. Acorns begin to create a blanket on the ground. A short cool snap can be anticipated only to have the heat come back after a few days of relief. But above all this, Halloween begins in mid-September around these parts.

Preparations are underway for Halloween Horror Nights 2016 at Universal Orlando. And now we can prepare our sweet tooth for the treats of Halloween and the Holidays by visiting Toothsome Chocolate Emporium and Kitchen. I enjoyed one of my best evenings ever at Universal with a visit to Toothsome and a stroll, with an unexpected thrill, through Universal Studios Florida. Summer’s oppressive heat is still upon us despite the signs of Halloween popping up around town. Summer thunderstorms will soon give way to longer, mistier rains, and stronger chances for hurricanes. But alas on this visit, a traditional summer thunderstorm poured itself upon me as I made my way to Universal Orlando. Walking into CityWalk there seemed to be a changing of the guards of sorts.  Hoards of guests streamed towards the exit. Meanwhile, just as many guests headed into the parks equipped with ponchos and umbrellas.

With grey skies it was difficult to see the smoke stack effect rising above Toothsome Chocolate Emporium and Kitchen. With its black, white, and copper color scheme coupled with whimsical details, landscaping, and mechanical details, Toothsome’s facade stands out in CityWalk’s impressive line up.

At first the concept of a chocolate / dessert-centric restaurant at Universal Orlando did not really grab my attention. Although, I really never enjoyed its predecessor NBA City, so anything was an improvement in my opinion. As I arrived to the still-in-preview restaurant, I noticed a large influx of guests. Thankfully, my friends had arrived before me and had secured a spot at the bar.

I made my way upstairs to the bar, quite an impressive sight. The bar is designed and positioned to allow patrons a panoramic view of CityWalk. It is a half circle that juts into the back upstairs dining room. I immediately admired the white brick wall with beautiful stenciling opposite the bar.

Our goal on this visit was not to sample as much of the massive menu as possible, this had already been accomplished by the Saturday SIX team. Instead we wanted to try a few items that weren’t discussed in the Saturday SIX blog post, and I was especially interested in the large variety of specialty cocktails. I was concerned that the cocktails would all be sweet or chocolate based. I am pleased to report that the menu is very well rounded and follows the popularity of craft cocktails, reminiscent of bartending days of old. In fact, there are six different Old Fashioned cocktails from which to choose, plus nine other libations.

Our first round compared two Old Fashioneds plus a refresh gin cocktail. The Revolutionary Old Fashion ($11.00) is one of the most sophisticated OFs I have ever had the pleasure of tasting. It combines Four Roses bourbon (a favorite of mine), creme de framboise, Cointreau, sugar and bitters. We also enjoyed the Old Chocolate Fashion ($12.00). I was afraid this one would be too sweet, but the chocolate and cherry flavors are subtle, providing a nice lingering soft layer of sweetness. While the gents in my party enjoyed their respective Old Fashioneds, I was living the dream… Violette’s Dream that is. This gin cocktail ($12.00) is refreshing and tart thanks to the lemon and grapefruit juice. The Anchor Old Tom Gin is shaken with these juices as well as creme de violette, a floral and herbal liqueur made in Switzerland. As we sipped on our cocktails we nibbled on a Duck Confit Flatbread. I love the rich flavor of duck, but it is a little overpowered by the truffle oil and cheese on this flatbread. Roasted brussel sprouts and sliced red grapes make this a very intriguing combination. The flatbread itself was thin and crispy; the toppings a nice, plentiful ratio. During round two of drinks I opted for something that sounded like a dessert cocktail. The Vanilla Chocolate Cocktail is perhaps the most meta name on the menu ($12.00). Vanilla vodka, Trader Vik’s dark chocolate rum, and Faretti chocolate biscotti liqueur with a dash of chocolate bitters poured into a martini glass and then fresh white chocolate is grated to create a soft blanketing garnish. I enjoyed this cocktail, but wasn’t really wowed by it. After our flatbread we indulged in one of the most extravagant entrees on the menu. The Signature Filet Mignon Oscar ($46.95). This may seem like a hefty price, but by comparison I feel it is fair. A filet mignon at most restaurants is priced around $44 – $48. For example, at STK Orlando a filet is $46 and it is served on its own, without any accompaniment.

Here at Toothsome the Filet Mignon Oscar provides two 3 oz filet medallions served atop a thin, delecate English muffin then crowned with lump cramp meat and buttery hollandaise sauce. Long asparagus spears are also placed on top, though I’d prefer if they were placed along the side of the plate instead, making it easier to cut into the filet. Speaking of cutting into, the filet is incredibly tender. It is provided by a local, large farm in the Central Florida area.

Filet mignons are known for their tenderness but not so much for their flavor. This presentation provides some wonderfully decadent tastes. A side of buttery potatoes with a nice herb seasoning adds some starch and rounds out the meal.

Since we were well on our way down the road of indulgence we opted to dive into two desserts. Toothsome, as you would expect, excels when it comes to the sweet stuff. We decided to order two sundaes since the Saturday SIX team already explored many of the other desserts.

Each sundae is $12.00 which does seem pricey for a dessert, but these sundaes are mountainous. We couldn’t resist trying the Brookies and Cookies and Creme sundae since the brookie is a often celebrated sweet of Universal Orlando (it’s a cookie with a brownie exterior). Truth be told, though, I only had eyes for the May Contain Nuts sundae.

Our wait times for our food were never more than 15 – 20 minutes, very reasonable. We received friendly and informative service from our bartender. As we exited we were selected to complete a survey about our experience on an iPad. I always say yes to surveys because one of my first jobs in hospitality was to conduct surveys with park guests. I firmly believe in the importance of gathering this information for better decision making. It’s hard to believe, but two weeks from now Halloween Horror Nights 2016 will take over Universal Studios Florida. This is an interesting time to visit Universal, the time in between Summer and HHN season. You get to walk around Universal Studios and see the set pieces and props that become the stuff of nightmares during Universal’s signature event.

The two areas with the most visible amount of set pieces and props are the New York and San Francisco areas. I didn’t know much in advance about the “Survive or Die” scare zone, which occupies the New York area, but it was easy to tell that the theme revolves around a post-apocalyptic era. It is interesting to look at the detail on the various set pieces and props, especially during the day. When it’s night time and especially during the event itself it can be difficult to truly take in and appreciate the layers of detail. Some details though, especially in the “Survive or Die” scare zone might be a little gruesome for sensitive folks. Such at the kennel full of fake rats gnawing at a doll’s leg. Last year was my first time going to Halloween Horror Nights. I never thought there would be a first time for me, much less that I would go again this year. I’ve found myself drawn to checking out the set up, letting the dark and nefarious mood start to set in. We’ll see how I do in a few weeks. Over in the San Francisco area, one of the most anticipated scare zones, “Dead Man’s Wharf” is taking shape. I think this will be a well themed scare zone. Each year it seems HHN’s level of detail and theming gets better and better. I like that this scare zone really matches its location. I could already picture the fog and mist. Is that a distant fog horn I hear? Ah yes, many kids have gone back to school which means Summer crowds are thinning out. As we strolled through Universal Studios we noticed some nice low wait times, of course the afternoon showers helped as well. It was towards the last hour of park operation, too. This is actually one of my favorite times to visit any theme park. Things are winding down, and become a little calm.

Perhaps it was the anticipation of conquering my fears in a few weeks during Halloween Horror Nights, or maybe the elixirs at Toothsome had worked some magic, but I got an urge to ride Escape from Gringotts. Thankfully it was only a 30 minute wait, around 7:00 PM. We grabbed a Fire Whisky and Strongbow at the Hopping Pot, which had no line – such a lovely sight. It is nice to have a beverage in hand when waiting in line for a ride. I love the Gringotts queue, it is absolutely one of the best queues in any theme park and I recommend that even if you don’t ride the ride, a visit through the queue is worth it.

This was only my second time ever on Escape from Gringotts. I fought through nerves and anxiety knowing I survived it once, I could do so again. The trick that helps me is to ask to be placed in the front row. There are two drops, really not that extreme at all but enough to psych me out a little, but being in the front greatly reduces the impact of these two sections. I think another ride or two aboard Escape from Gringotts is in order now that Summer crowds have subsided. As the sun began to set we strolled through the rest of Universal Studios. We noticed the lighting throughout much of the park had been replaced with blue and red bulbs. It seems Chance is ready for her time in the spotlight. And as it turns out, I am ready for the arrival of Fall, as we begin to enter my favorite seasons ever at Orlando’s theme parks.