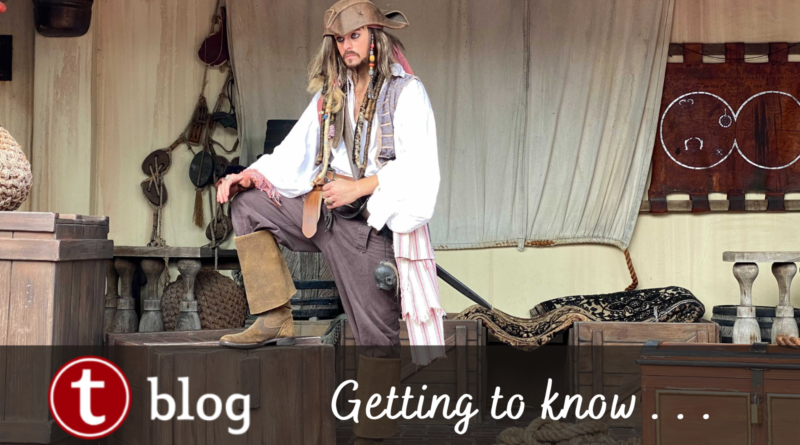 Many of the changes put in place at Walt Disney World during the pandemic are starting to return to their pre-COVID state: restaurants are reopening, hotels are reopening, and almost all the rides are back to full function. But there’s one key area of the Disney theme park experience that remains substantially different from pre-pandemic circumstances: character interaction. Here’s what’s happening with Disney World characters right now.

SPOILER ALERT – I’ll be using words like costume and mask which may dull the magic a bit for true believers. If you’re in that camp, feel free to move along now. On your way out, enjoy this video of Brian in a bathrobe. OK, now that we’ve gotten that out of the way …

What is exactly is a character?

Characters are the live version of animated creatures/people found in Disney films and television programs. Characters appear in the Walt Disney World parks and resorts in cavalcades, stage shows, at character meals, and in social distant surprise happenings. (Previously characters greeted guests one-on-one, but that type of interaction is paused during the pandemic.) While a character may be just inches tall when you see him on TV, all the in-park characters are adult human size or larger–sometimes much larger.

There are two types of characters: “fur” characters and “face” characters. Fur characters are those with an oversized, non-moving mask serving as their entire head. Typically the fur characters are animals such as Mickey and Minnie, Goofy, Donald, and Pooh. There are some “human” fur characters, notably Captain Hook, the Incredibles, and Doc McStuffins, but these are less common. Face characters have a fully human form – they look like real people, with nothing obscuring their eyes/nose/mouth. The essence of the character is conveyed via costuming, wigs, and makeup. Face characters include all of the princesses and their princes, Peter Pan, Jack Sparrow, Alice, Mary Poppins, and more.

In the Star Wars realm, Chewbacca is a fur character (about as furry as they come) and Rey is a face character.

The Mickey Mouse stationed at the Magic Kingdom’s Town Square Theater did talk for about five years, but this experience was discontinued in mid-2018. Mickey had a set of prerecorded phrases he could say, but the interaction was not a true free-flowing conversation. Some folks LOVED the experience of meeting talking Mickey, but I found it terrifying. And I don’t think I was alone; I observed several petrified children refuse to interact with talking Mickey. And in one particularly heartbreaking incident, I happened to be in the queue behind a special needs adult and his family when he started screaming in fear when Mickey started speaking. Personally, I’m glad that talking Mickey is a thing of the past at WDW.

Mickey, Minnie, and other face characters will “talk” during stage shows. The characters have coordinated movements synched to pre-recorded dialog, but their mouths won’t move while this is happening and there are currently no fur character who can have a one-on-one conversation with a guest.

How many characters does Disney have?

Do you have a list of the characters I might be able to see in the parks during my trip?

The characters that appear in the parks change with some regularity and there is no official Disney-sanctioned list of in-park characters. We have a list of 50 park characters, but even that is not entirely comprehensive.

Additional characters may be found at runDisney events, during holiday events, or at after-hours parties or in other special ticketed situations.

The available characters aren’t on the Disney website? I thought I saw it there.

You can suss out some character appearances using the disneyworld.com website and/or the My Disney Experience app. For example, on the website go to “Things To Do” and then scroll down to click on “Character Experiences.” 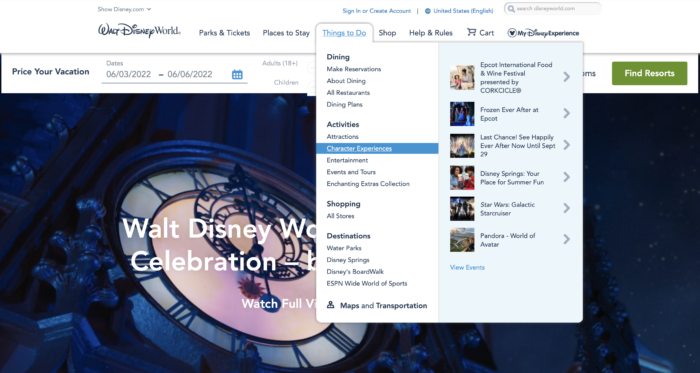 From there you’ll see some of the entertainment options that include characters. (Notably missing below – any mention of the Magic Kingdom.) 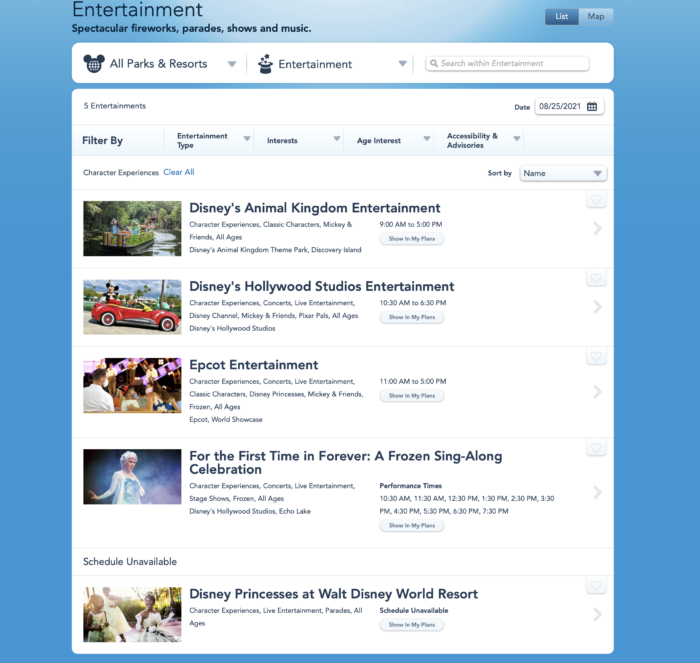 Clicking on these items you get a general sense of things that might include characters. Some are obvious – Mickey and Friends Flotilla definitely includes Mickey, but who else? And two of the items listed here, Discovery Island Drummers and Feathered Friends in Flight, are not character experiences. 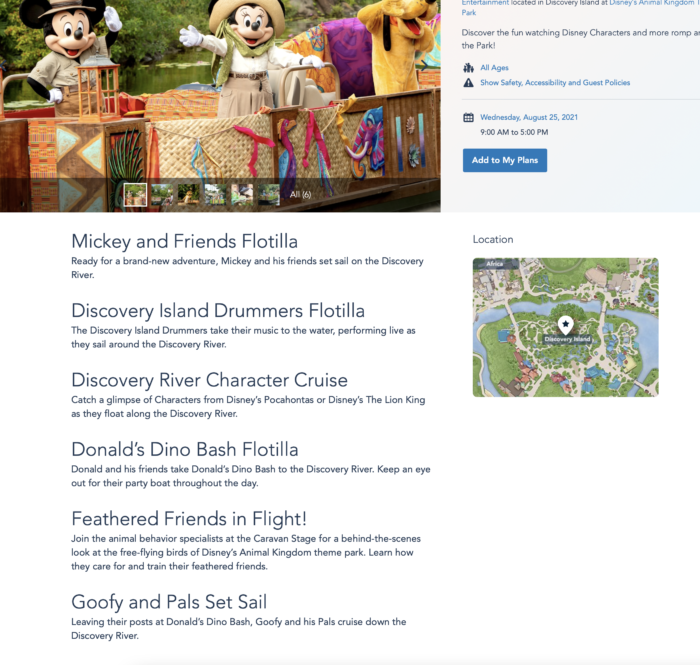 We met Captain America on a Disney Cruise Line ship, but currently there are no Marvel characters greetings at Walt Disney World.

The layers of legal complexity that surround this question are many and varied. The upshot is that Disney does own the rights to lots of Marvel content. You can meet Marvel characters on some Disney Cruise Line sailings and at the Avengers Campus at Disneyland, but due to an pre-existing contractual obligation, Disney is not allowed to use most Marvel properties on land, in the United States, east of the Mississippi River. Guardians of the Galaxy is not part of the old contract, which is why we’re able to get a GotG coaster at EPCOT and why you might be able to meet Star Lord there at some point (no scoop, just a guess). But in the meantime, if you want to meet Spider-Man, the Hulk, and their cohort in the Orlando area, you’ll have to do it at Universal Islands of Adventure, not Walt Disney World.

Can I hug Mickey Mouse?

Pre-pandemic, there were several dozen characters that held regular meet & greet sessions in the theme parks. You could hug them, chat (with face characters), get their autographs, and pose for up-close-and-personal photos. This type of meet & greet opportunity is currently discontinued. There are still characters in the parks, but they interact with guests in other ways, all at a distance.

So what are the new ways to see characters?

The parks still have some stage shows with characters. Examples of this are Beauty & the Beast Live on Stage and the Frozen Sing-Along.

The primary replacement for parades (which are currently paused) are a new invention called cavalcades. These are like unadvertised mini parades, typically just one or two vehicles with characters on board. The characters wave and blow kisses, but they don’t stop and they won’t touch you. See more information about cavalcades at Magic Kingdom and Animal Kingdom.

The primary replacement for the traditional meet & greets are socially distant character experiences in the parks. For example, in the Galaxy’s Edge area of Disney’s Hollywood Studios, Chewbacca will appear on a balcony above the land and wave to guests. In the Magic Kingdom, the Country Bears also appear on a balcony. In EPCOT, the Frozen princesses stand behind a fence and wave. Other characters frolic in the grass in view of guests, but inaccessible to them due to fencing. In all these situations, you’re welcome to take a distant selfie with the characters in the background, but you won’t get to snuggle up next to them.

What about character meals? Are those still happening?

There are still character meals, but they’re configured differently now. Instead of characters stopping at each table to interact with guests, the characters now just festively walk through the dining room and wave at guests. Again, you can take a selfie with them in the background, but there is no one-on-one interaction.

Can I get a character autograph?

Are there characters in the Disney hotels?

Pre-pandemic this typically only happened at character meals based in the hotels (Chef Mickey’s at the Contemporary, for example) or in odd circumstances such as entertainment during a hurricane when guests are confined indoors. During the COVID era there have been vans full of characters that made brief appearances at the hotels. These were unscheduled and, as per COVID normal, the characters were kept at a distance from guests.

Are character appearances ever impacted by the weather?

Yes. Any outdoor character appearance may be cancelled during rain and possibly even during extreme heat or cold. If it’s pouring rain at Disney World, you’re unlikely to see a cavalcade pass by.

Will my child be afraid of the characters?

It really depends on your child’s temperament. Few children are afraid of face characters – they just look like people wearing odd clothing. The fur characters are the ones that cause problems of a small, but vocal, subset of children. Most kids are unfazed by meeting Mickey and the gang, while others are reduced to a quivering ball of tears any time they get near a giant mouse.

If you have some concern that your child might exhibit character fear behaviors, try finding a costumed character in your hometown (perhaps at a birthday party or Chuck E. Cheese type venue) to practice with. At least with the information, you’ll be able plan accordingly.

And if there’s any silver lining about the current state of character appearances in the parks, it’s that skittish kids are in much less danger of having a meltdown because the characters do not have an opportunity to get close to them.

One thought on “FAQ: Walt Disney World Characters in the Theme Parks – The Current Situation”