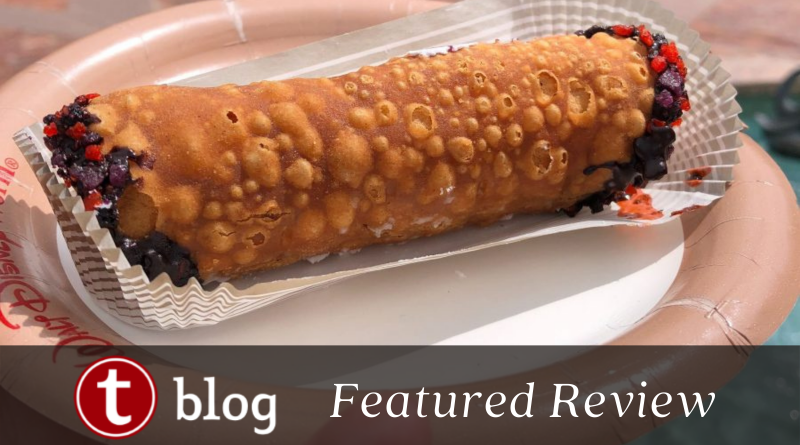 It’s always appreciated when any of the other four parks at Walt Disney World take part in seasonal celebrations of any kind. We’re glad to see Disney’s Hollywood Studios now has their own line up of Halloween treats to try throughout the park. Our field team recently undertook the daunting task of trying some of the new Halloween treats. Here are the highlights.

If you like traditional tiramisu you may be disappointed in the Pumpkin Break Tiramisu. The espresso is missing here. But, if you enjoy pumpkin flavors and mascarpone cheese then you may enjoy this treat.

Frozen Apple Cider is a great option for those balmy fall days in Florida. The humidity and heat are still alive and well in Orlando through October, so this is a great way to get some fall flavors while getting refreshed from the heat. Warning – this specialty beverage is loaded with green boba pearls. This drink has more boba pearls packed into it than a trick-or-treat bag after a visit to Mickey’s Not So Scary Halloween Party.

Box of Bones Eclair from Backlot Express $5.49 (a miss)

If you desire a traditional chocolate eclair, this may not be the eclair for you. But if you want something photogenic, this Box of Bones Eclair sure fits that purpose. Our field team expected there to be a more prominent chocolate flavor. To our team this would be a pass.

It’s hard for me to resist pumpkin cheesecake, and based on our field team’s reviews it sounds like this one needs to be on my list for my next visit to Disney’s Hollywood Studios. Pumpkin cheesecake filling is mixed with praline crunch and fills the crunchy canoli. A good deal at $4.99.

Last year this Poison Apple treat debuted at the Starbucks location at Disney’s Hollywood Studios, known as Trolley Car Cafe. This mousse-filled treat has a delicate apple flavor and hints of caramel. Our field team said it reminded them of the desserts at Satul’i Canteen at Disney’s Animal Kingdom. If you’re looking for a light, airy autumn treat this may be a good fit for you, as long as you’re not looking for a robust apple flavor.

Specialty glow cubes and straws are offered as add on to enhance your Halloween beverage, and included in select beverages. These are available at multiple locations throughout Walt Disney World. We find it’s easiest to open the MyDisneyExperience app and go to the mobile ordering section and look at the Halloween Exclusives Menu of each location – where offered.

The Frozen Apple Cider comes with a poison apple glow cube. A Tire Pumpkin Straw is available at PizzeRizzo and also at Sunshine Seasons at EPCOT. Our team has a theory these were supposed to be offered at Cars Land at Disney’s California Adventure which is currently closed.

Do any of these treats make you want to say “Hooray for Halloween in Hollywood?” Which one do you want to try?