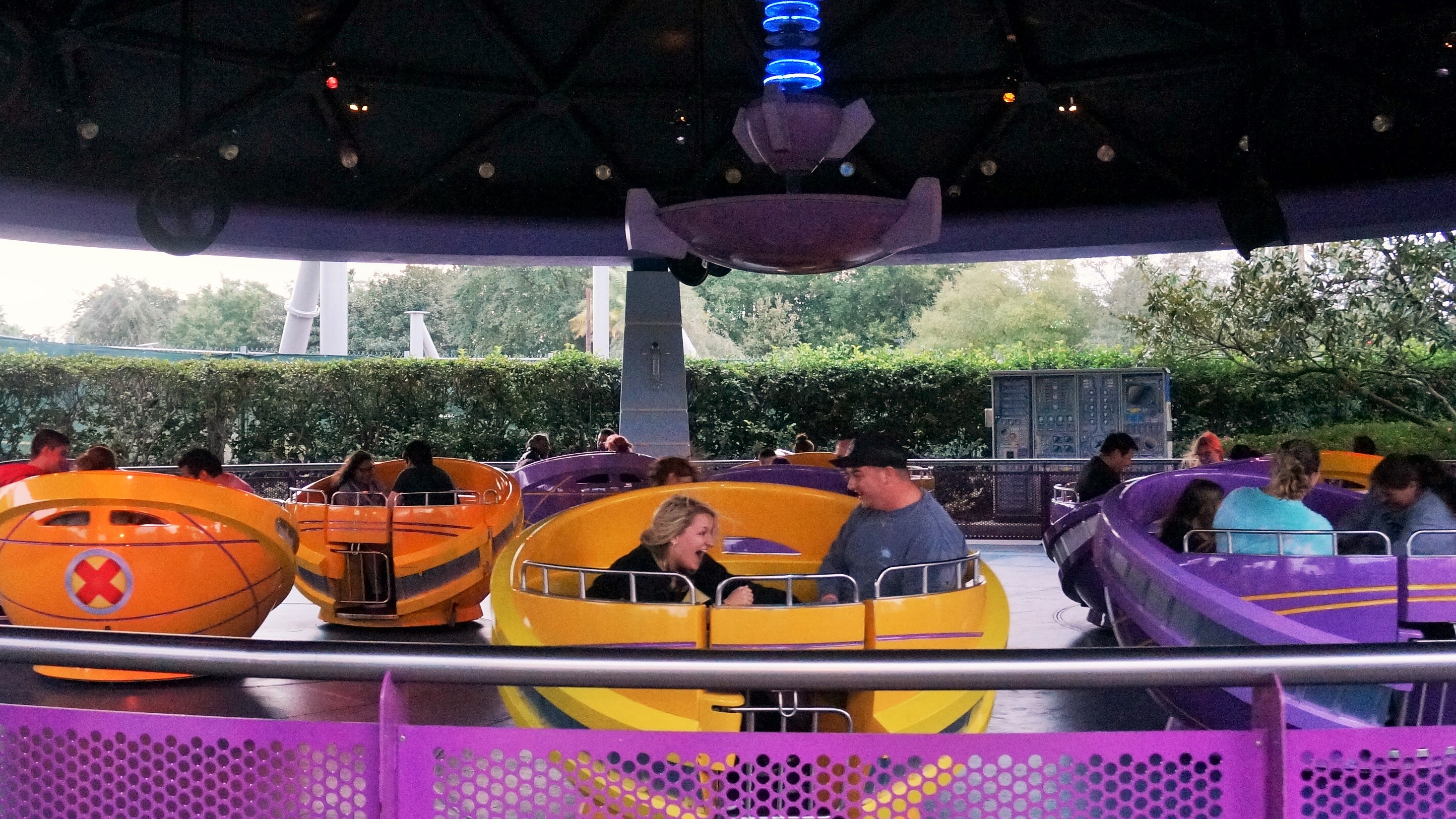 It’s clear that Universal Orlando has cornered the market on thrilling, exhilarating rides. When you want exciting experiences, Universal Orlando is the clear choice. But there is more to Universal than thrill rides, and we often overlook the smaller, more minor attractions here. Especially with the closure of two of Universal Studio’s minor attractions: Disaster! and Twister Ride It Out! (both names ending in exclamation points I might add), it can be easy to forget the small collection of less thrilling rides.

It seems that the spinner style ride is a must-have when building a theme park. It all started with the iconic Dumbo the Flying Elephant in Disneyland in 1955. Ever since that time it has become a staple of theme parks to have at least one of this type of ride in its line-up.

At Universal Orlando two spinner rides are offered, both with a little added touch. Twirl and Hurl came onto the scene when the World Expo area received a makeover courtesy of The Simpsons. After The Simpsons Ride took over for Back to the Future, the turf of the Simpsons was expanded to include multiple eateries, midway games, and this spinner ride.

Pay close attention to the signage throughout the ride’s queue and exit, as well as the audio messaging. I love the names of the ride vehicles, each flying saucer has a unique, pun laden name such as Mai Tai Fighter or Ronald Ray-gun. Additionally, the extra touch here are the targets around the circumference of the ride. As you spin through the air aim, your vehicle up or down to line up with the targets of varying heights. If you line it up just right you’ll cause the targets to spin accompanied by silly sound effects. For longtime Universal fans the E.T. Adventure ride probably isn’t considered a lesser known attraction, in fact it may be a favorite of some. It is actually one of the few attractions at Universal for which I have an affinity. The queue is incredibly themed, the bicycle ride vehicles are unique, and it is one of the few rides with practical sets and figures (as opposed to projection screens).

Rumor has it that E.T. and his friends will soon be heading back to the Green Planet without a return ticket. This is the only ride still standing that has been there since opening day. I recommend that even if you prefer more exciting rides that you at least pay this one a visit, if only for its classic appeal.

This ride is the essentially the same as Magic Kingdoms teacups, but doesn’t get as much love since it’s no where near as cute. There are some halfway decent lighting and sound effects to give this ride a little bit of character. But, given that it is tucked into a back corner of Marvel Super Hero Island, it doesn’t get a whole lot of attention.

Seuss Landing at Islands of Adventure is one of my favorite lands. It is chock full of whimsical details. All the rides here are easygoing, perfect for families and those that prefer milder experiences (like me). One such ride is One Fish, Two Fish, Red Fish, Blue Fish, a spinner ride with a splashy-splashy surprise.

You will get a little wet on this ride because playful fish figures are poised and ready to squirt you. This added touch is much more fun when you listen to the words of the song that plays as you spin through the air. It will instruct you to either fly your fish high or low in order to avoid getting wet.

The High in the Sky Seuss Trolley Train

There are two tracks, each with different onboard audio and a slightly different path. Typically during slower periods only one track is running, usually the one of the right hand side as you wait on the loading platform. This track runs through the Circus McGurkus quick service location. The audio on this side involves making sounds based on the sights along the ride path.

The track on the left is my preferred track. It tells excerpts of the stories that are represented through the ride path, ending with peculiar residences in near miniature scale situated on top of the buildings the train passes over.

Both tracks have an alternate audio track, I am not sure what causes this track to be used, but I find it quite boring because it does not really correspond with the ride path. It is a song of sorts involving the alphabet. Anytime I am unfortunate enough to be on the train with this version of the audio I feel I have set foot inside a preschool classroom. Other than this one potential downfall, the Trolley Train is one of my favorites.

Flight of the Hippogriff

This “kiddie coaster” is a great example of reclaiming an existing ride and converting it to a different theme. Back before Hogsmeade Village took over most of Lost Continent, a mythical forest, the stuff of medieval fairy tales welcomed guests at Islands of Adventure. The Flying Unicorn provided young guests looking to earn their coaster cred a ever-so-slightly thrilling ride without being too much to handle.

Not much has changed about this coaster with its Harry Potter theme change over. The ride vehicle resembles a training Hippogriff (since riding an actual Hippogriff takes lots of skill and patience) and the queue is set in the glen of Hagrid’s hut. A walk through this short, but well themed queue is a fun little trip even for non-riders. This ride has captured the imagination of many. It’s the one that got away, the unachievable. You see adults cannot experience this ride without accompanying a young child. It also has a dreadful hourly capacity making the wait time quite long, typically.

Every time I see one of the ride vehicles swoop through the air along the track I feel a pang of longing. Wouldn’t it be cool to see Islands of Adventure from the view? It is quite the tease. Rumor has it that the track and ride system were simply the prototype and not originally intended to be the finished product. It is an easy rumor to believe considering the weight / age limit, the poor hourly capacity, and the bare bones appearance of the track. Universal Orlando’s bread and butter are big coasters and big attractions, all meant to attract thrill seekers and adrenaline junkies. But as you can see there are plenty of other rides to fill in some of the gaps. Not everyone wants to do one big ride after another so thankfully Universal offers a fairly well rounded collection of milder, lesser known attractions. Make sure you pay one or two a visit next time you’re in Universal Orlando.

6 thoughts on “The lesser known rides at Universal Orlando”