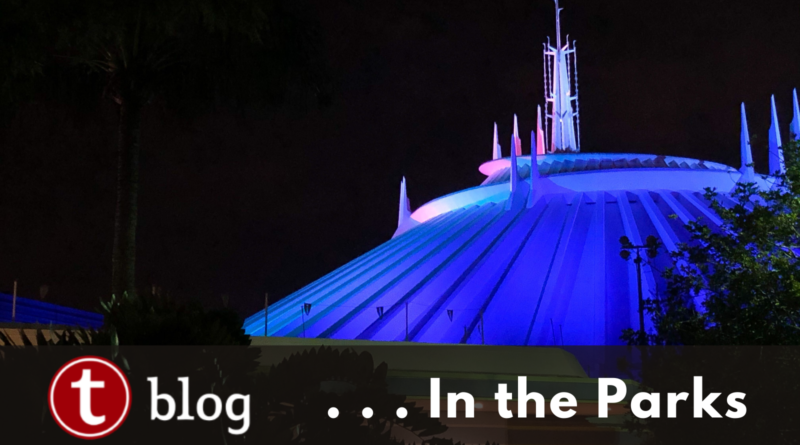 Yesterday, we looked at how Extended Evening Theme Park Hours (EETPH) at EPCOT are one of the best ways to save time in line at that particular park. The wait times during EETPH at EPCOT are lower than during Early Theme Park Entry, lower than regular rope drop, and are remarkably pretty comparable to the waits that you’ll experience if you use Genie+ or ILL for the same attractions. But EPCOT isn’t the only park with EETPH. So today we’ll look at how you can maximize your time during a Magic Kingdom Extended Evening.

So what are EETPH? (Does anyone else just screech that loudly in your brain when you read it? Just me?) EPCOT and Magic Kingdom currently each stay open for an extra two hours after the park closes to day guests, one day a week. Only guests staying at Deluxe or Deluxe Villa (DVC) resorts are allowed to stay and play. If the parks are open late anyway thanks to expected crowds, this can result in some potentially very late nights. For example, the EETPH at Magic Kingdom when we ran this test were from 11 pm to 1 am. Probably not very feasible for those with small children. And maybe not very interesting to regular visitors that just tour during the day in a relaxed manor while enjoying their deluxe accommodations. That all leads to very few people bothering to stay late and take advantage of this perk.

Both parks are reportedly ghost towns during EETPH, even on the most crowded park days (like the week between Christmas and New Years). Most attractions are walk-ons, especially during the second hour. We had a lot of success earlier in the week at EPCOT, so we sent Chrissy to the Magic Kingdom on December 29 to see if we could generate another excellent night. 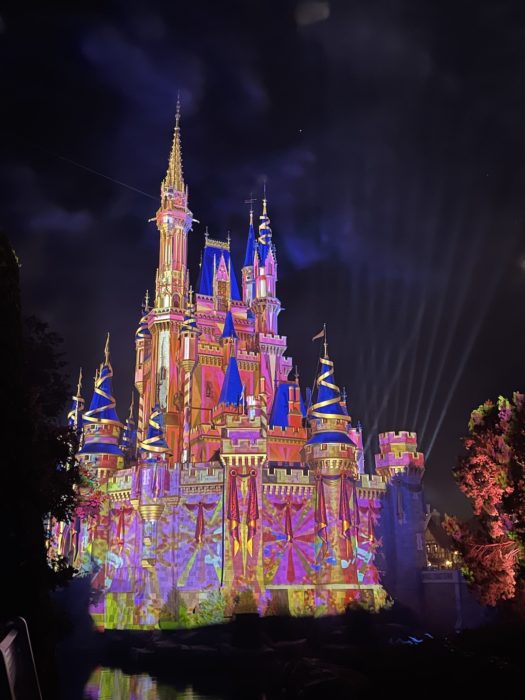 If you’re already staying Deluxe or DVC, or if you’re already budgeting for a stay at a Value or Moderate resort and are willing to rent DVC points or have the TouringPlans Travel Agency hunt some deals for you, EETPH is a perk that isn’t financially out of reach. In fact, the time savings are definitely enough to justify not purchasing Genie+ for EPCOT or Magic Kingdom. And they may even be enough to allow you forego an extra day of park tickets, especially if you have park hoppers.

Our goal for this late night was to test just how much you can legitimately accomplish during EETPH on one of the most crowded park days of the year – December 29, 2021. Park reservations for Magic Kingdom were sold out for the day, and almost all (if not all) qualifying resorts were at capacity. So it should have been a worst-case scenario for the usefulness of EETPH.

On top of that, we don’t want to just fill our 2 hours with spinners. We want to use our time well – to experience attractions that would have a long wait during the day, and to avoid attractions that don’t see large wait time spikes. Unfortunately, a few factors were working against us on that front. Splash Mountain and Jungle Cruise aren’t available during EETPH, so we couldn’t put those in our plan. On top of that, Big Thunder Mountain went offline at 1:30 pm and never came back up (and, in fact, remained offline the following day as well). We still knew that we wanted to accomplish Seven Dwarfs Mine Train, Space Mountain, and Peter Pan’s Flight, as well as several other popular – and enjoyable – attractions. 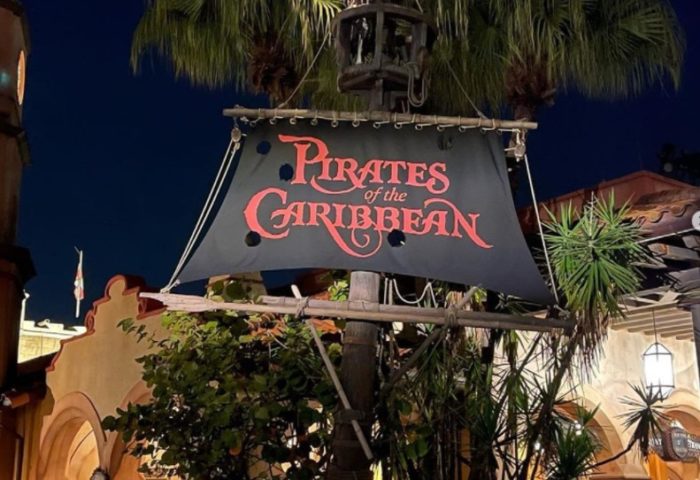 Our in-parks tester began EETPH at 11 pm right outside of Pirates of the Caribbean. With Big Thunder Mountain closed, Pirates is relatively off on its own, geographically, compared to the rest of the available attractions for the night. We didn’t want to have to walk back and forth there because that would take up valuable time. So it came first. Chrissy ended up waiting just over 1 minute for her boat. For what it’s worth, based on other EETPH, Big Thunder would have also been close to a walk on very early on during EETPH if she had decided to begin there instead. 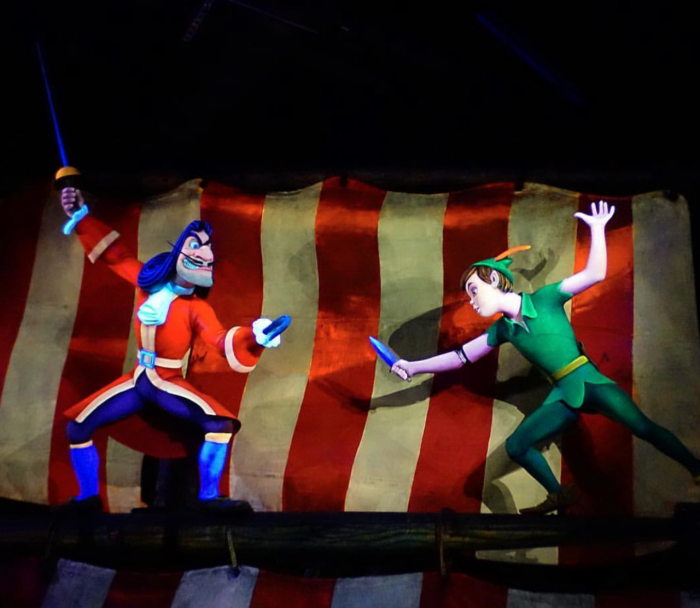 Next up was Peter Pan’s Flight. At 11:20, after navigating from Pirates, she waited just under 6 minutes to fly to Neverland. That’s absolutely crazy – Pan was posted at 60 minutes for most of the Early Entry hour, and peaked at 110 minutes (and staying at that peak for over 2 hours throughout the day). 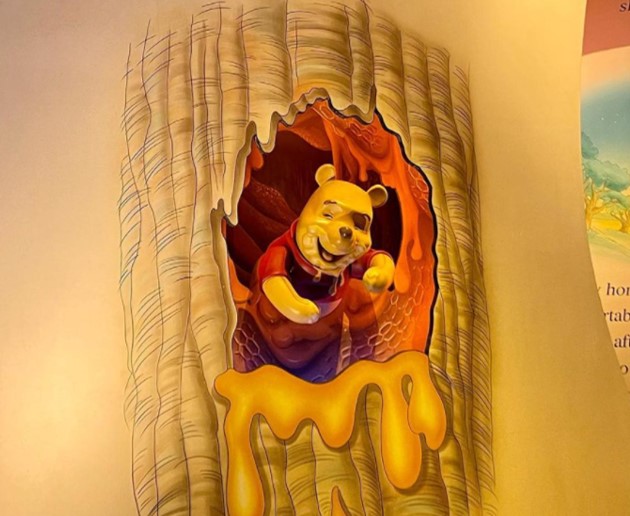 After Pan, Chrissy headed to The Many Adventures of Winnie the Pooh and walked right on with no wait at 11:35.

Then came the potential breaking point of our plan – Seven Dwarfs Mine Train, which had a 45 minute posted wait when Chrissy got in line at 11:42. Thankfully, the actual wait was under 15 minutes! For reference, we have actual wait times of 42 and 50 minutes within 5 minutes of Early Entry starting, and the peak posted wait for the day was 120 minutes. 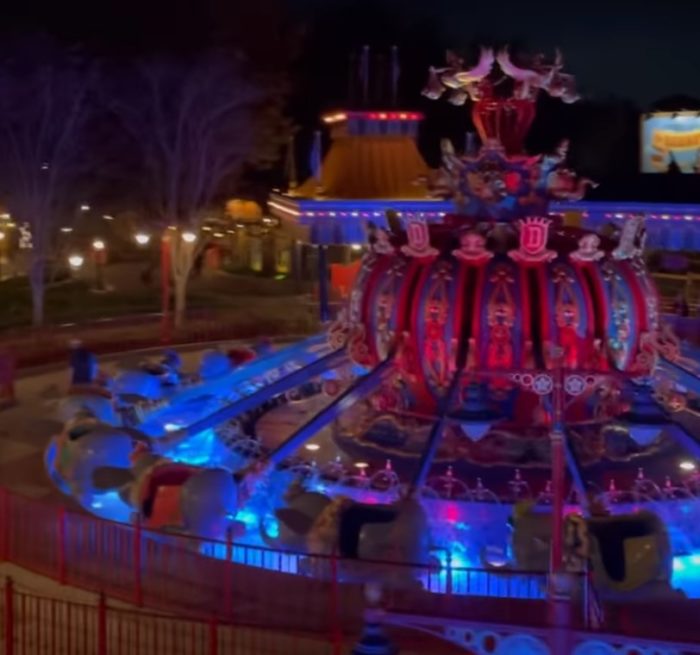 After that, everything else was smooth sailing. Chrissy rode Dumbo twice with no wait. In fact, she was allowed to just stay on the ride for her second spin. Check out all of those empty elephants! 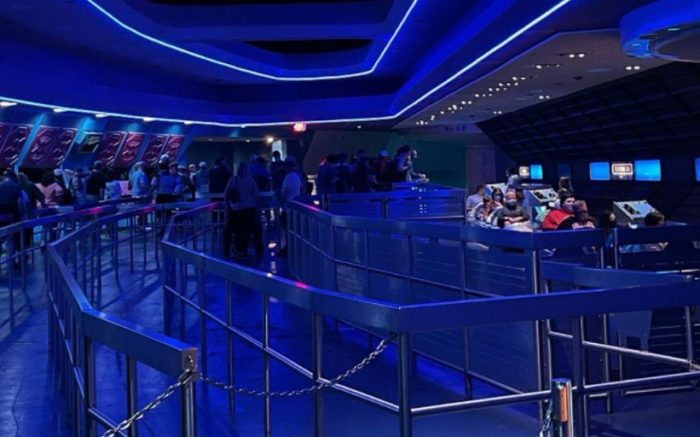 That set her up to head to Tomorrowland to finish out the night. She started at Space Mountain at 12:20 am. It had a posted wait time of 30 minutes, but she was launching after just 6 minutes. Compare that to a 30 minute actual wait within 10 minutes of the start of Early Entry, or a peak posted wait of 75 minutes. 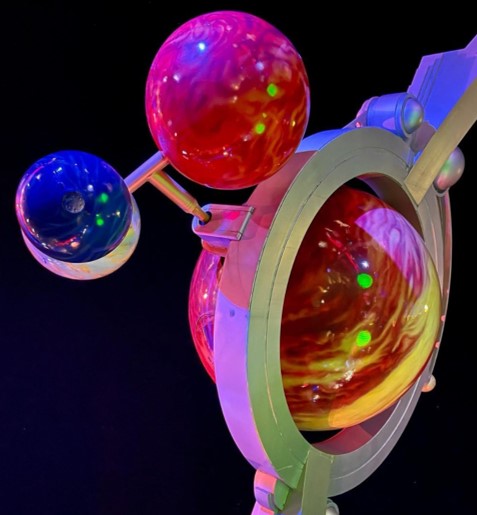 Riding in a rocket was fun, so Chrissy followed up with a ride on Astro Orbiter, which was just a 3.5 minute wait. 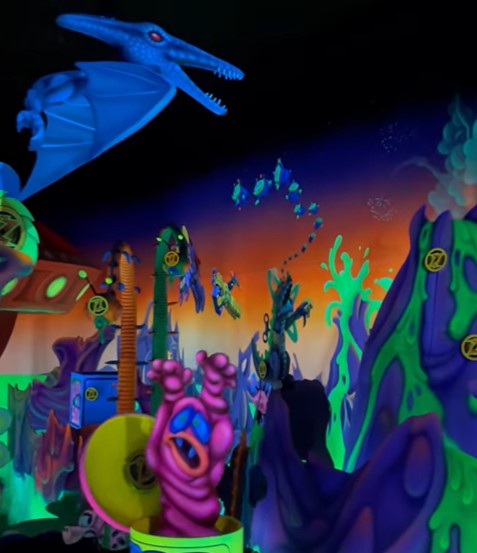 Once back on ground, it was 12:49 and there wasn’t time to walk anywhere else. So she headed to Buzz Lightyear’s Space Ranger Spin, which had no wait. She was able to take two shots at this attraction before the park closed down for the night!

Summing it up: In the course of the 2-hour EETPH, she was able to accomplish 10 attractions, with about 31 minutes of total waiting. And almost half of that wait was just for Seven Dwarfs!

I’ll be short and sweet (wait for it – it’s a joke). If you were a regular, off-site guest and rope-dropped Magic Kingdom at normal opening time – 9 am – AND if you had clairvoyance and knew the best way to hit each attraction in the right order to minimize wait time AND if you had a stomach and bladder of steel such that you didn’t need to take any breaks or eat anything … we can figure out how much time you would’ve spent in line during the day to accomplish the same 10 attractions in an ideal manner.

So what would your day have been like? In order to do the same 10 attractions (8 distinct attractions, plus re-rides on Dumbo and Buzz), you would have been actively touring from 9 am to 4:45 pm with no breaks. You would have spent 395 minutes in line. That a number that’s big enough that it’s hard to understand in minutes. It’s over 6.5 hours of waiting!! For 10 attractions! We were able to minimize the wait at Seven Dwarfs to “only” be 70 minutes, and keep the wait for Peter Pan to under an hour as well. But that meant taking some trade-offs in the form of an average wait of 45 minutes for Buzz both times, and almost an hour wait at Space Mountain. Yikes.

Have you tried out EETPH at Magic Kingdom? Or does Chrissy’s experience convince you that maybe it’s something you should stay up late for? Let us know in the comments! And remember that the lovely folks over at the TouringPlans Travel Agency can help you book Deluxe so that you can take advantage of this awesome perk! Click below to get yourself a quote.