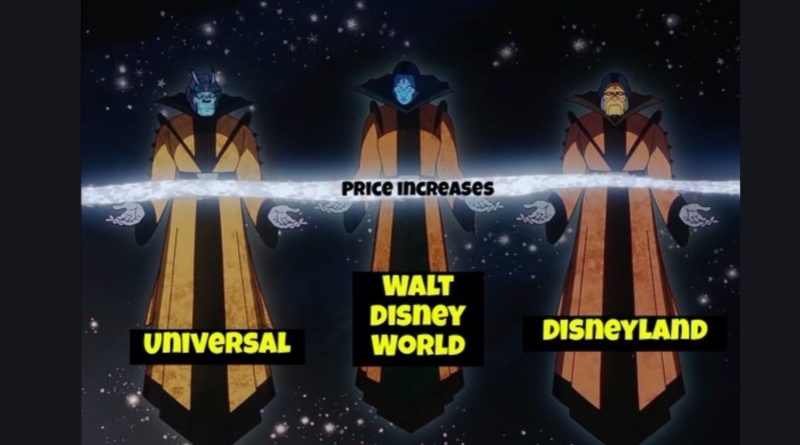 This week’s SATURDAY SIX takes a look at recent theme park news via MEMES! A big month of developments happened in and around the world of theme parks and we’re here to check out the most important ones, starting with…

After being closed for over year – much longer than their Florida counterparts – the theme parks in California began welcoming guests back during the last week of April. However, only California residents were allowed in until this past week. With all the Disney parks in America open to all guests, we’re finally back on track to at least some sense of normalcy. We all missed the attractions, the shows, the restaurants, the Cast Members, and more, but there’s one thing most of us didn’t miss…

FastPass+ has still not returned in Florida, and the Disneyland Resort reopened without their version of FastPass. Now, some people love FastPass+, even after showing them the negative effect it has on wait times. No one knows for sure what will happen to FastPass+ in the coming months or years, but many speculate it will transition to a “Pay For Play” upcharge rather than the free option it used to be. Recent interviews with Disney’s Josh D’Amaro and Bob Chapek have both men indicating that some of the changes brought upon by COVID are going to be kept in place, even the ones most guests don’t enjoy (such as park reservations).

Not everything will be sticking around though. The plexiglass dividers that were everywhere in the Florida Disney parks have started to be removed, and all those social distance markers are going away too. Hard to have us “fill in all the available space” otherwise. 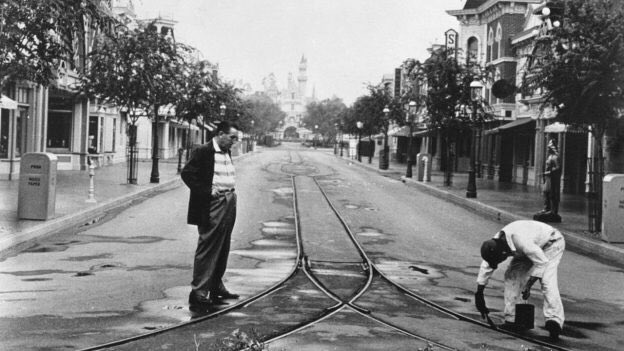 The reaction by guests who get shut out of both attractions? Well, “not good, Bob.”

The Boarding Group process for us in Florida is confusing enough, but when you have two attractions utilizing them, the confusion doubles as well. To quote Michael Scott, “Why don’t you explain this to me like I’m five?”

Thankfully, one member of DisTwitter created a handy dandy flowchart. 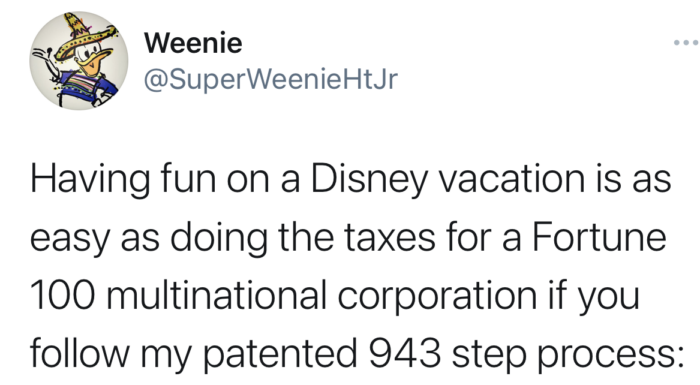 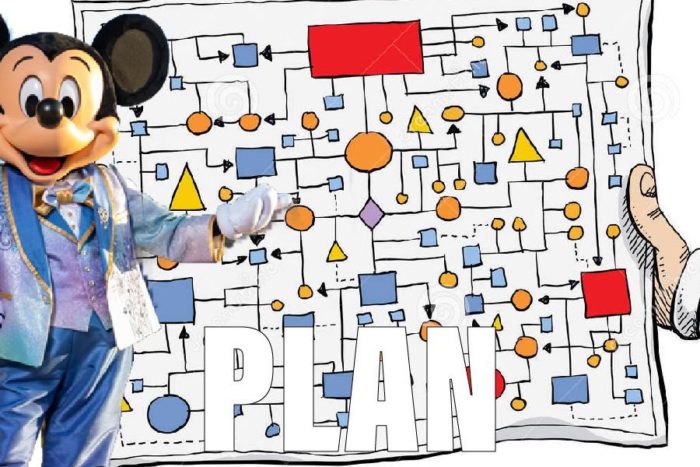 One of the most controversial changes to the Walt Disney World theme parks since reopening was the addition of park reservations, with many Annual Passholders discovering they can’t go to the parks on the days they want.

These unavailable dates for passholders – many of whom are used to going whenever they want with no restrictions – are very similar to obstructed view seating for sporting fans. You kinda have what you want, but not really. 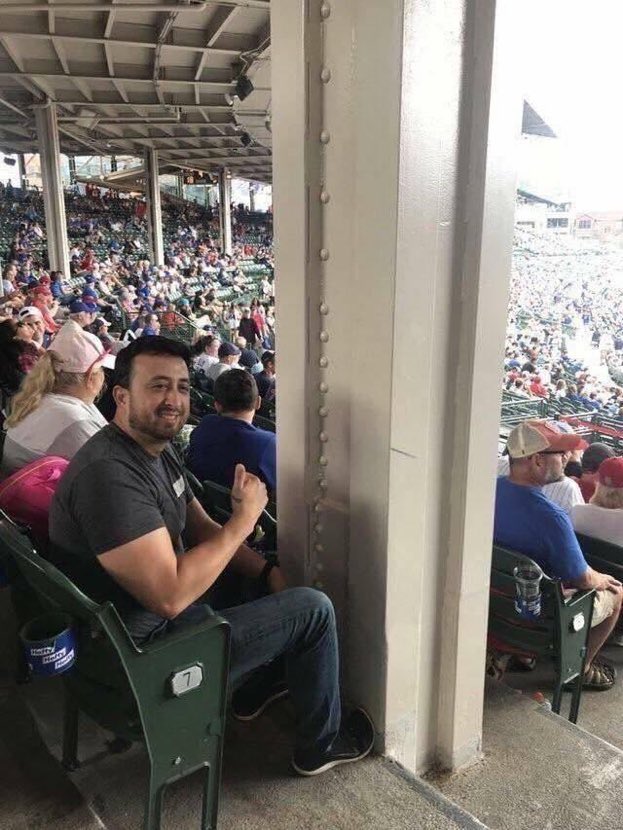 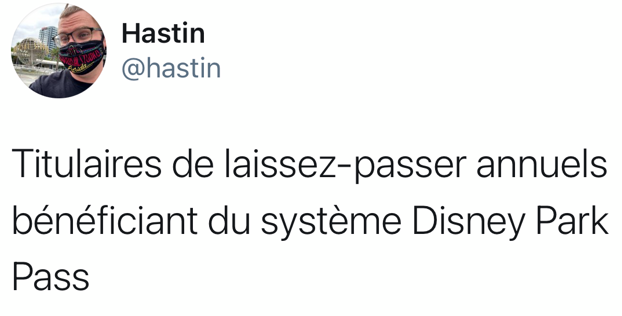 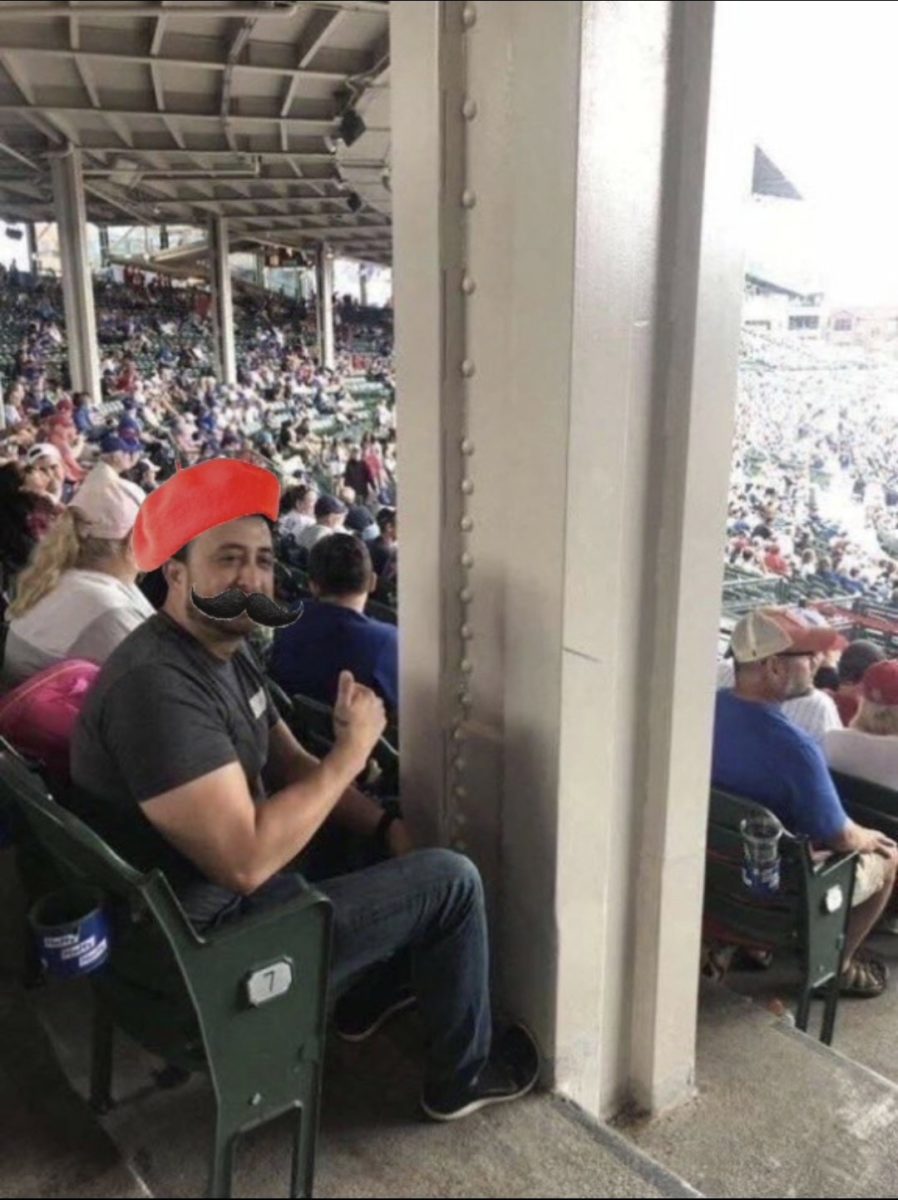 # 3 – The Only Good Thing To Come From Star Wars: Attack of the Clones

This past week we saw a meme format go viral like very few do, traveling through pretty much every single fandom, including our beloved theme parks. It is based off a particularly awful scene from Star Wars: Attack of the Clones. The scene in question featured Anakin Skywalker and Padme – would-be lovers who had about as much chemistry as waffles topped with pasta sauce – having a discussion about government.

The actual discussion is one of the longest minutes in cinematic history, but thankfully something good came out of it. The four panel meme format begins with Anakin making a statement, Padme asking a playful follow-up, Anakin staring at her, and Padme restating her question realizing the answer she’ll be getting is not one she wants to hear. Using the very scene in question, the meme below plays on the fact that the reader knows Anakin will one day become Darth Vader.

This particular meme format went EVERYWHERE. Some used it for some very pointed observations on America itself.

But of course over in DisTwitter, we used the format to poke fun at some of our favorite theme park attractions. For example, Soarin’ Over California was an attraction that brought the audience to spontaneously applaud after each and every single ride. It’s replacement, Soarin’ Over the World? Not so much.

How many times do you think former Imagineer Joe Rohde was asked about The Yeti in Expedition Everest?

Rex from the original Star Tours!

Universal Orlando dropped some big news this week announcing the return of Jack the Clown and put up single day tickets. The HHN fan’s reaction? Not thankful for the news they got, just complaints about no news yet on Frequent Fear Passes.

Here we have the meme playing with an iconic line from one of the best theme park attractions ever made.

Your Humble Author even had to create one. 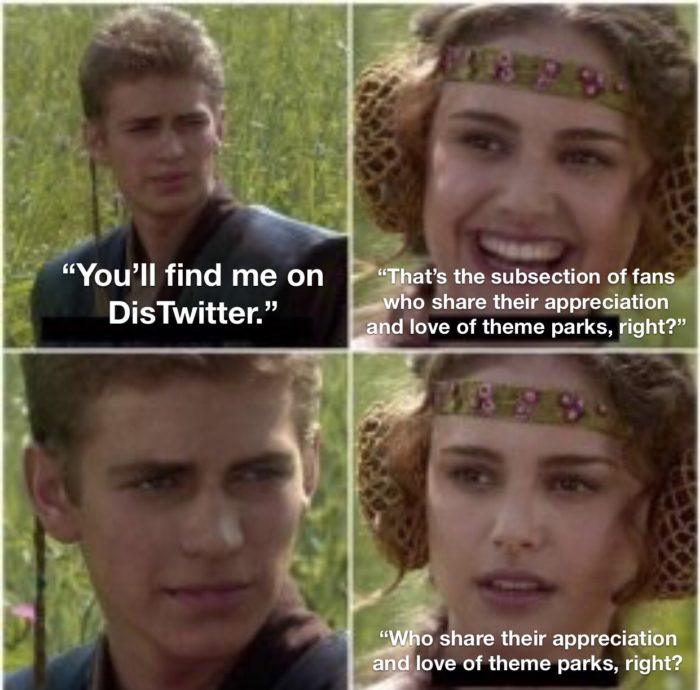 The last several weeks have been huge for Disney+ as several big time movies and television shows made their debut on the streaming service. First was Cruella, the live action prequel to 101 Dalmatians. The reviews for Cruella ended up being overwhelmingly positive, with many being shocked at the overall quality. That said, during the weekend of its original release at the end of May, people couldn’t believe a scene which showed how Cruella’s mother died was real. The loss of a parent is a defining moment in many Disney films, but the particular way Cruella’s mom died was what we call next level bonkers. The moment did set up a good comparison though…

I would have liked to have seen this… 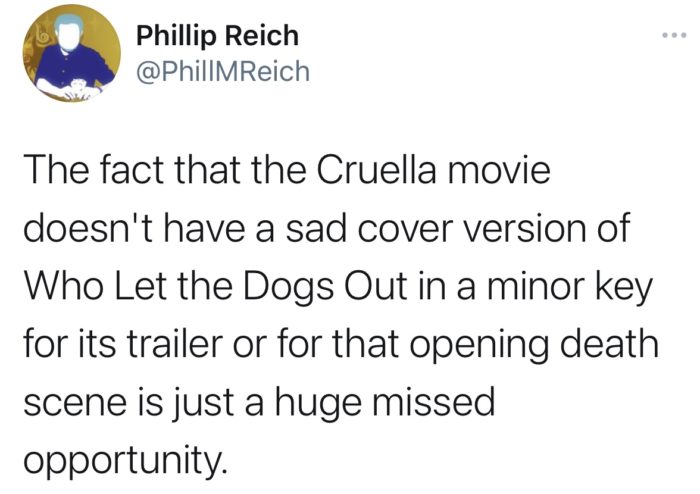 The movie was also the inspiration for a new drawing by one of our favorite artists, @SonderQuest.

The Mandalorian was a huge hit for Disney+ out of the gate, and its second season continued the quality level of the first along with dropping one of the all time biggest reveals during a finale in my lifetime. The next live action Star Wars show on Disney+ will be based on the character Obi-Wan Kenobi. To everyone’s delight, Ewan McGregor will be reprising his role of Kenobi from the movies.

Now then, for pretty much every major film or television show made today (Stranger Things, Marvel movies, Fast & Furious, etc) “set pictures” will be leaked by paparazzi stalking the set or even superfans using high powered cameras. Recently some pictures of Ewan McGregor on the set of the Kenobi show made the rounds, and while McGregor was mostly covered up, you could see some of his on air clothing peeking out… 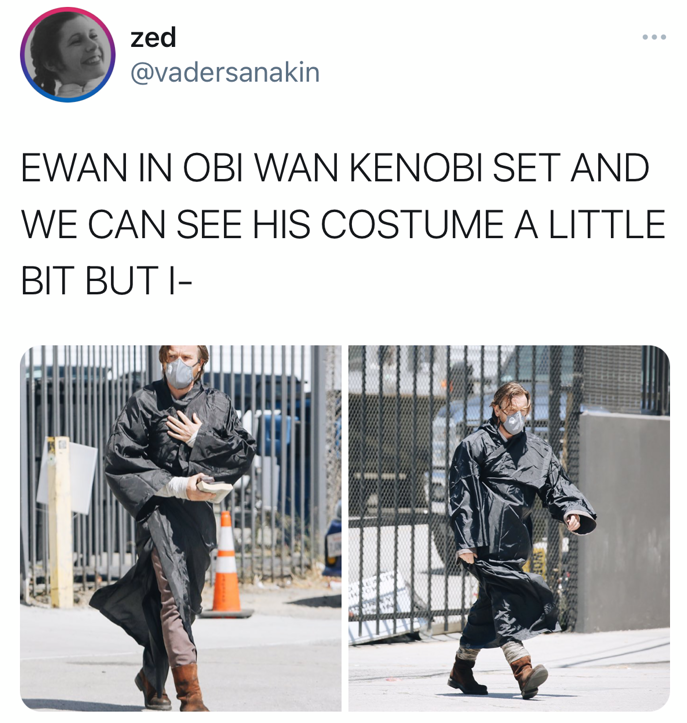 Social media user @shannbon made the observation that these Kenobi set pictures were very reminiscent of a photo posted of Disney princesses making their way across the park. 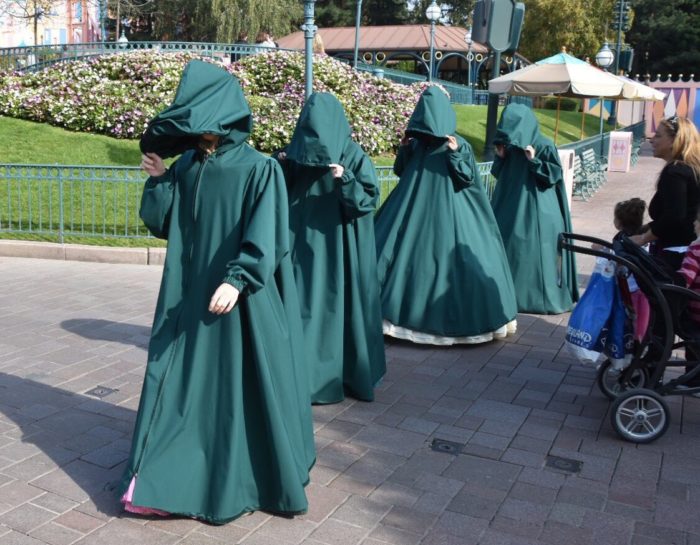 The hottest show on Disney+ today is Loki. Going back to the start of Disney+, all the major shows debuting on the platform released their episodes every Friday. This includes the Marvel shows like WandaVision and Falcon and the Winter Solider. Loki became the first major Disney+ show to release episodes on a Wednesday. The results? The first episode of Loki became the most watched premiere in Disney+ history. In fact, the company then went the next step and changed the release date for all original shows to Wednesdays. This will include the upcoming series Monsters at Work, an animated show based on the characters from Pixars’ Monsters Inc. It was originally scheduled to debut on Friday, July 2nd, but now will begin airing on Wednesday, July 9th.

Readers of this fine blog series probably know by now how much I love comic books. Seeing the Marvel Cinematic Universe come to fruition is literally a lifelong dream come true. Now we are getting big budget Marvel TV shows, and as much as I loved the WandaVision and Falcon shows, the start of Loki is the best Marvel has done to date. Even better, the show has finally answered the question theme park fans have been wondering for a while….

…how does photographer @bioreconstruct seem to be everywhere at once? 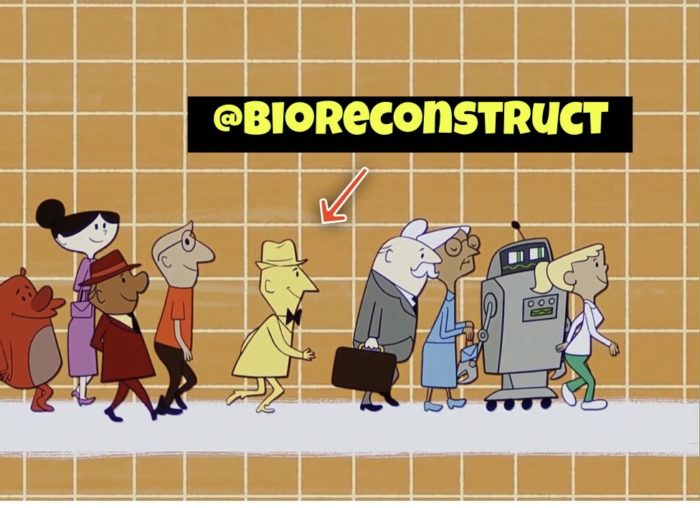 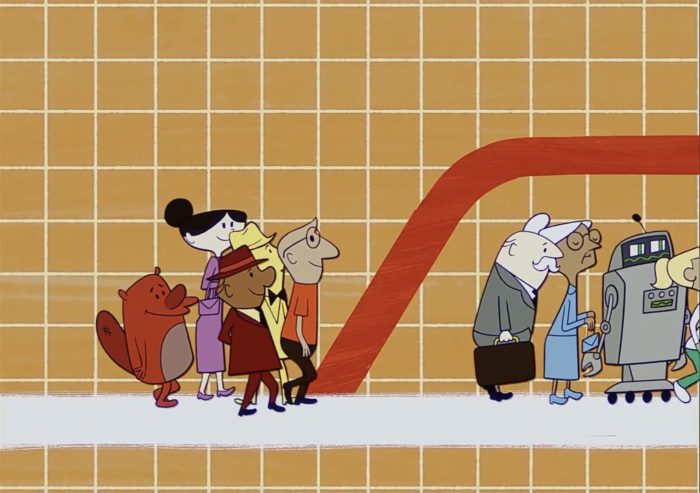 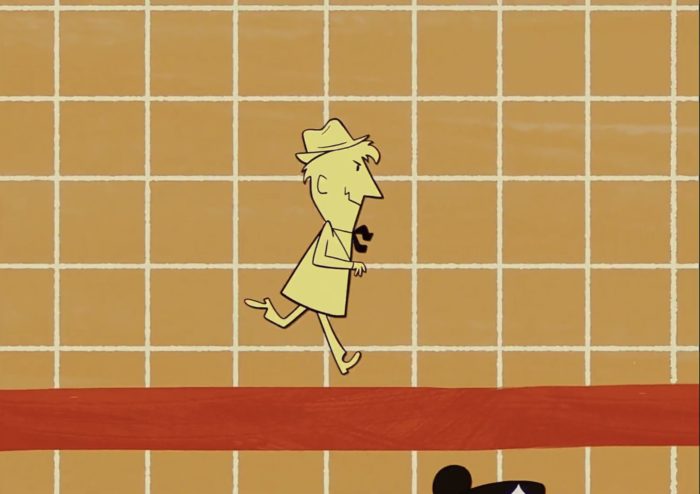 In June, both the Disney and Universal parks have begun to use the single rider lines again for several attractions. 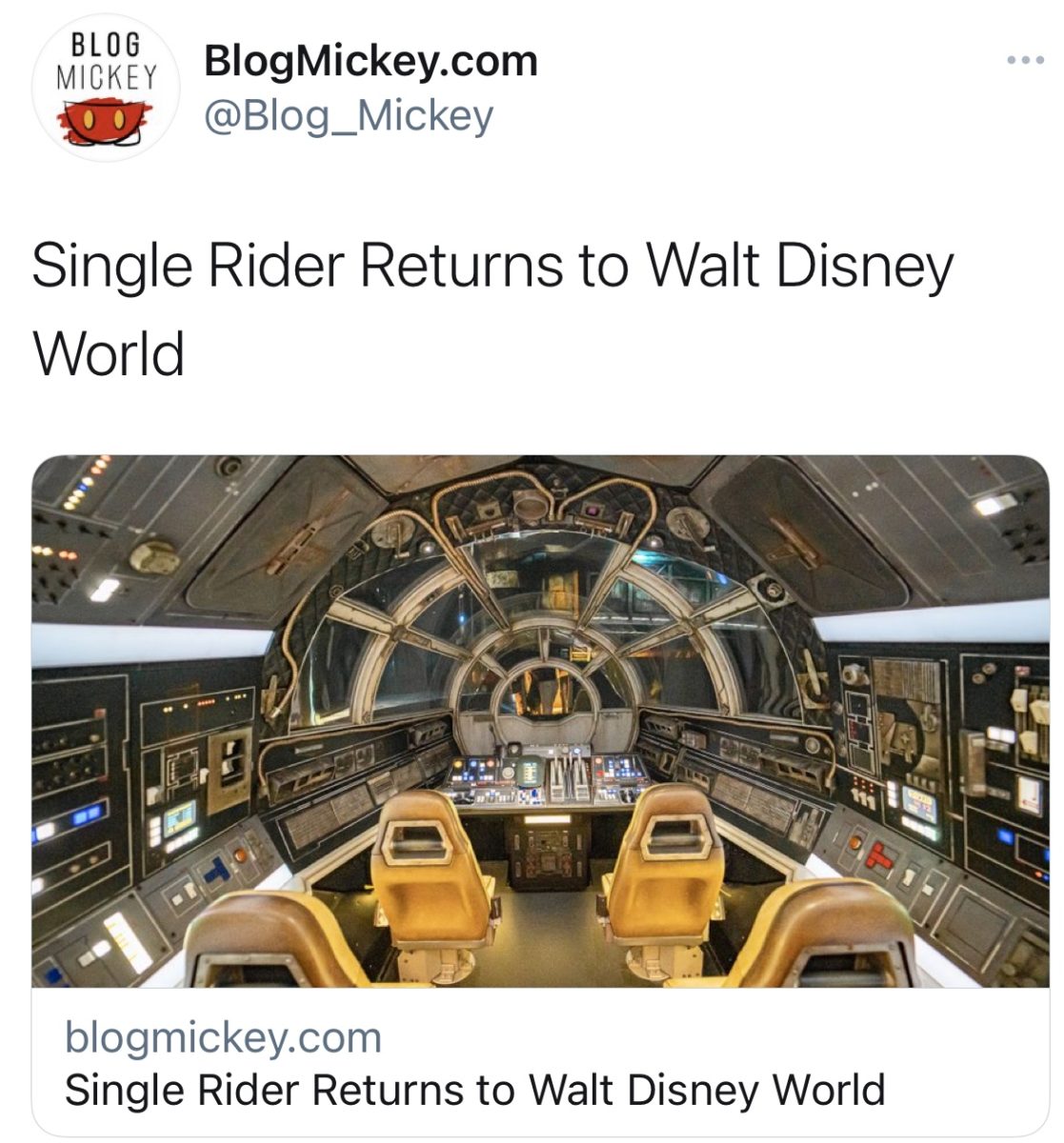 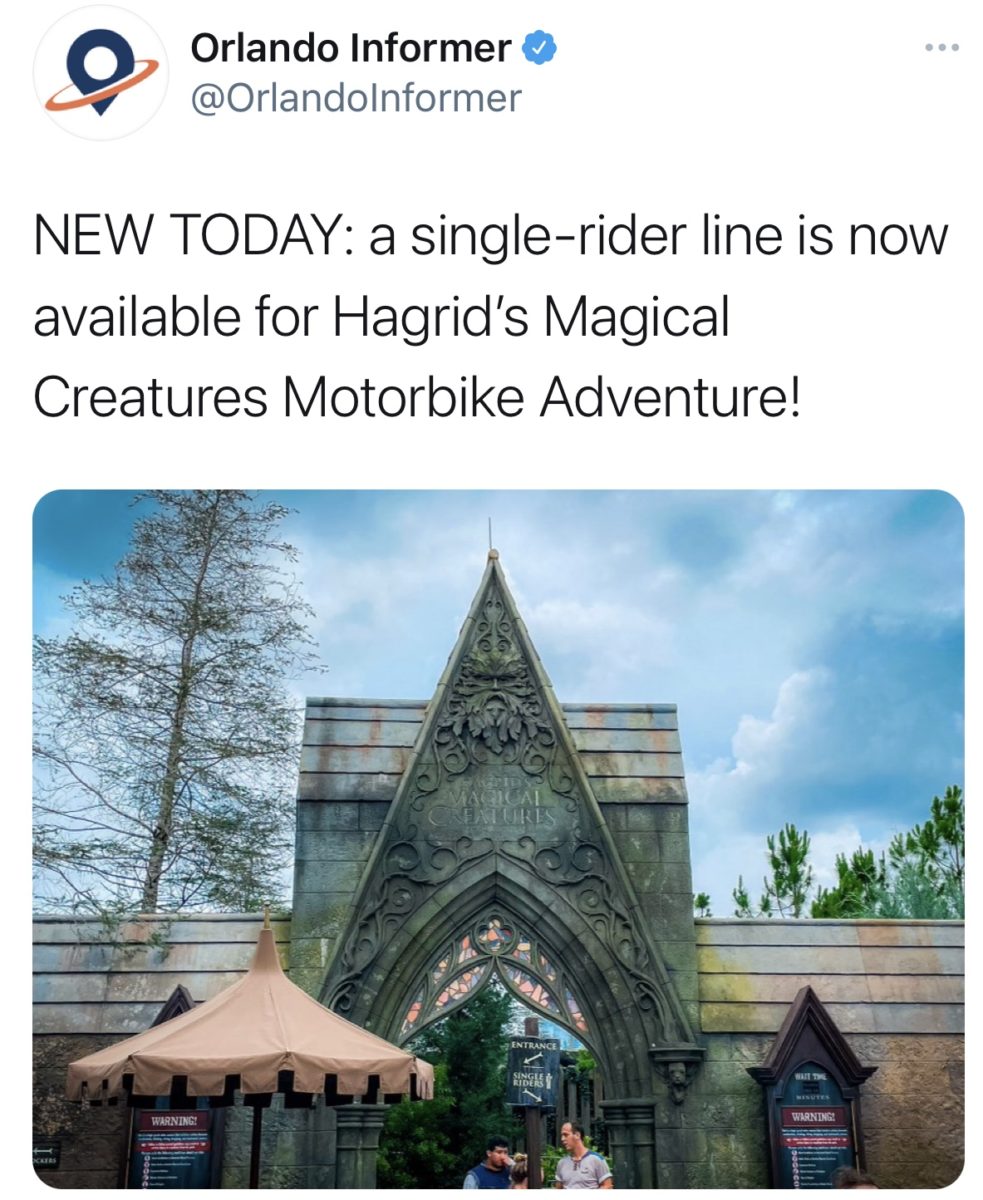 The show Loki also explains just how important the single rider line can be to some guests.

One of Disney+’s biggest competitors in the streaming market is HBO Max. At the end of May, HBO Max released the long anticipated Friends reunion. The reaction from fans was mixed. I believe most fans – including myself – were looking forward to a new episode which would get us up to date with the characters we loved. Most likely that would have never delivered on expectations, so HBO Max was probably smart to go with the informal Q&A session. Coming out of the show, Matt LeBlanc went viral with the “cool uncle” vibe he laid down during the reunion. 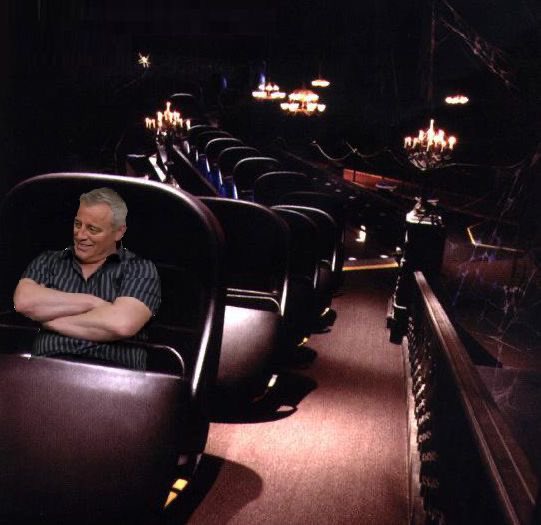 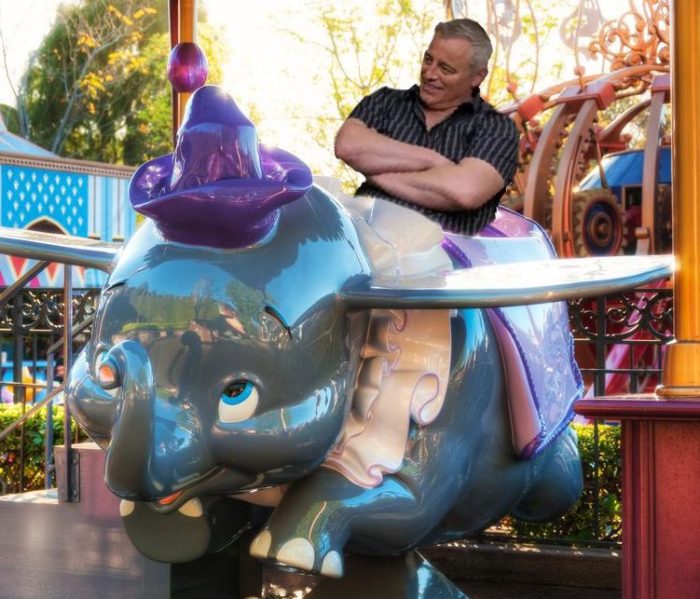 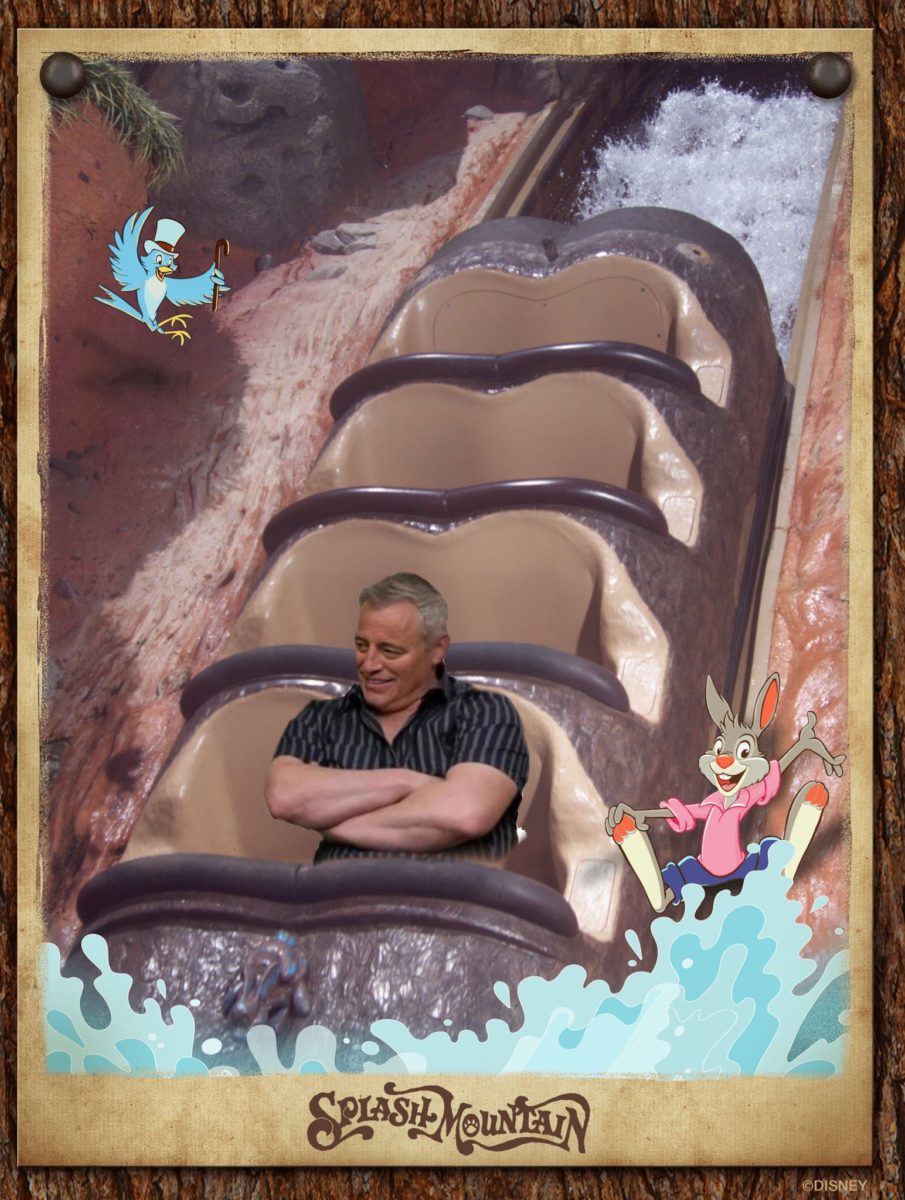 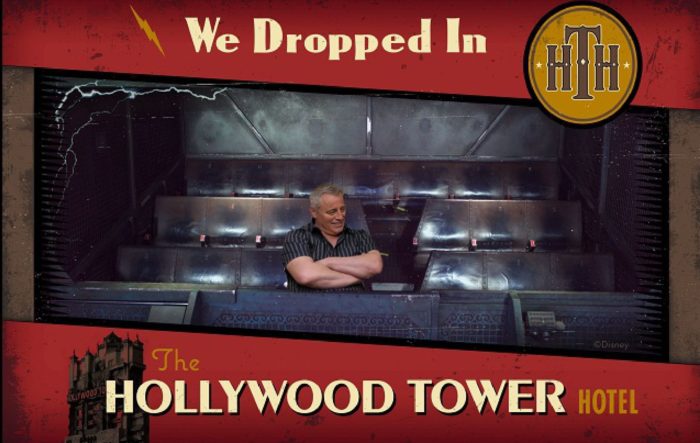 …being “That Guy” in Monsters Inc. Laugh Floor… 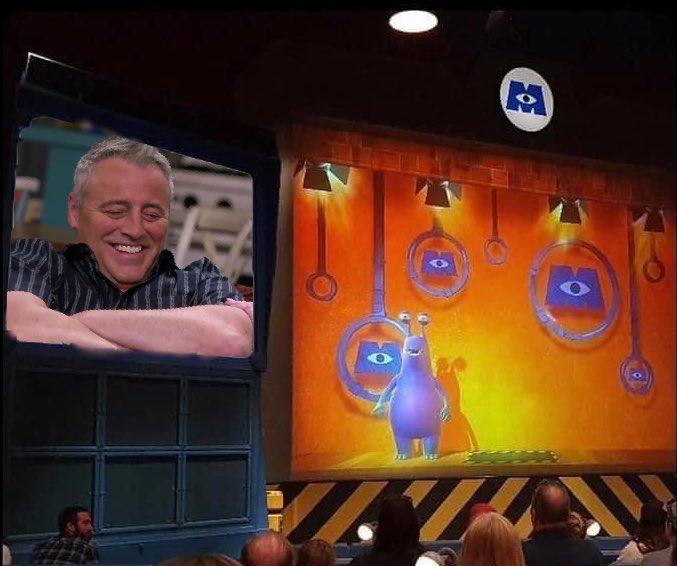 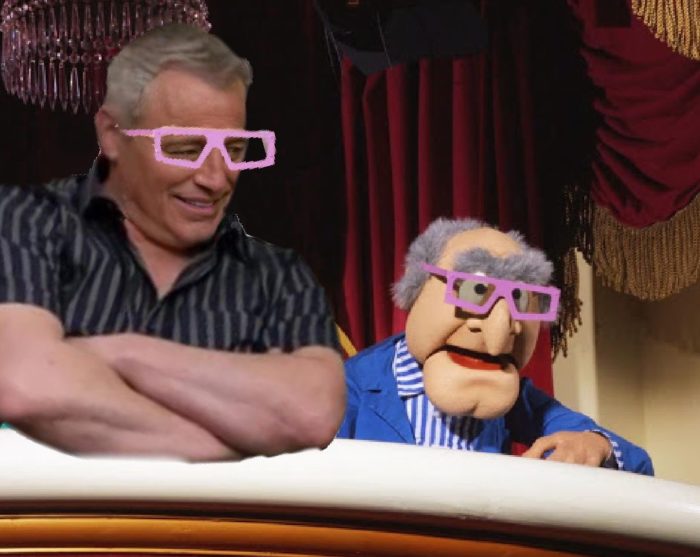 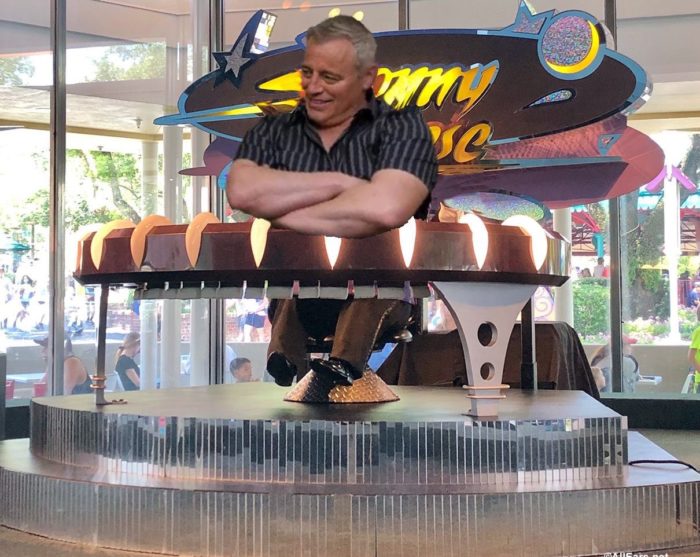 HONORABLE MENTION – The Quick Rise (and Even Faster Fall) of Noodlegate

Earlier in June we had a roller coaster of emotions, as we got the great news of ‘Ohana finally reopening, but some bad news as well… 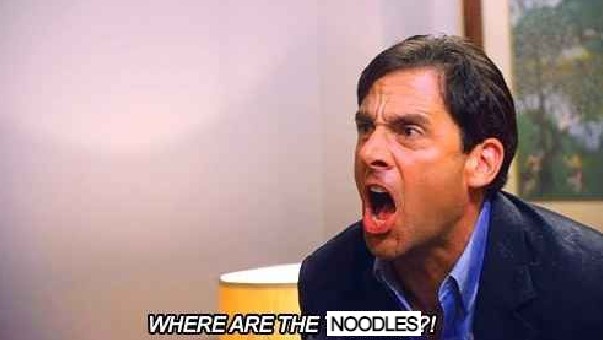 Disney released photos of the “new and improved” menu which showed the fan favorite noodles would not be returning. DisTwitter took this news about as well as you could expect. 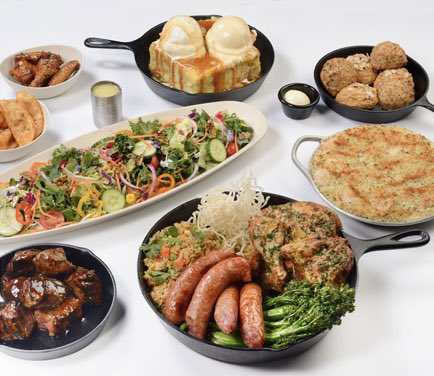 Presenting their displeasure in the form of memes. 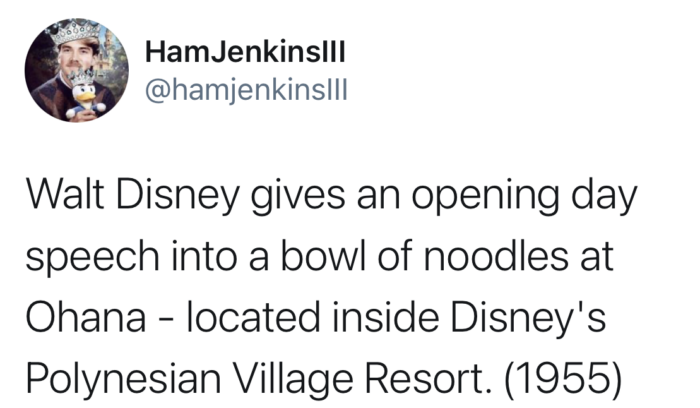 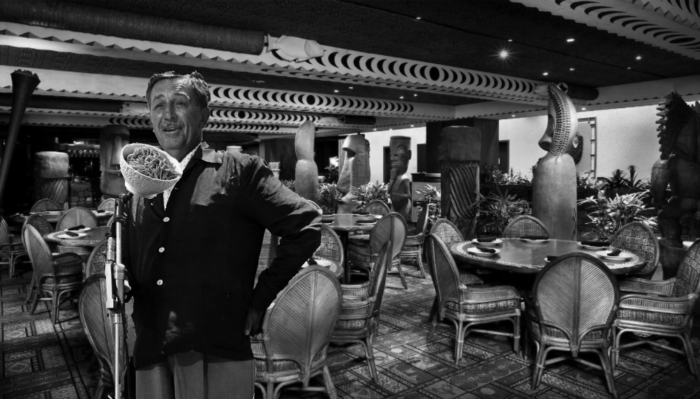 After 3 long days, Disney caved in to public pressure.

However, good luck getting a reservation to eat those noodles…

So there you have it: The SATURDAY SIX Looks at Recent Theme Park News via MEMES! See you next weekend for the latest installment of the SATURDAY SIX, where we’ll look at something fun from the world of Disney and Universal. If you enjoyed yourself, be sure to check out The Magic, The Memories, and Merch! articles covering the latest from the Disney Outlet Stores. You can also follow Your Humble Author on Twitter (@derekburgan).