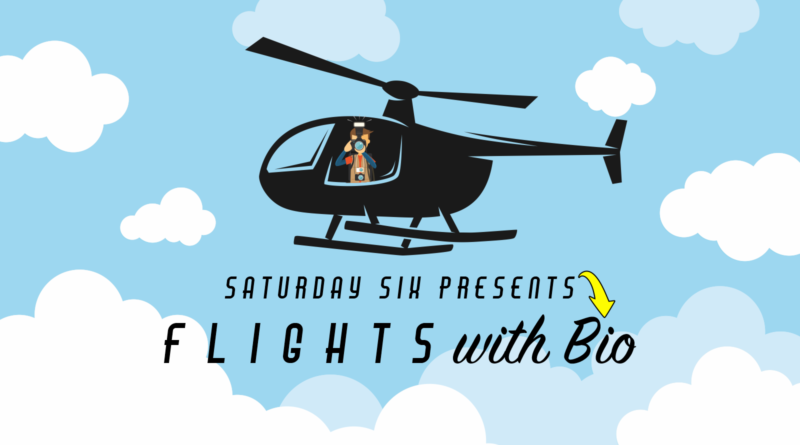 This week’s SATURDAY SIX proudly presents: Flights with @bioreconstruct! Grab your Dramamine because we’re getting into the blogger high-in-the-sky helicopter with none other than @bioreconstruct to get a bird’s eye view of Disney and Universal. Bio took not just one, not two, but THREE separate flights this past week, and we’ll be covering a whole bunch of spots around the theme park corridor, but we’ll first start above an area which will soon be supporting the Disney parks…

A while back Disney announced that it would be moving Walt Disney Imagineering from Glendale, California to Lake Nona, Florida. This is a major change and hopefully will have some long term dividends for the Florida parks as the people designing the rides will now be living in the temperamental Florida climate rather than the idyllic one found in Southern California. For example, Star Wars: Galaxy’s Edge was created for both Disneyland in CA and Disney’s Hollywood Studios in FL, but we can possibly assume that if the land were designed with Florida weather in mind rather than California, we’d see more covered areas built into the design to provide cover from the heat/humidity and consistent rain storms. That benefit comes at a cost though, as many longtime Disney Imagineers will not be relocating to Florida, instead choosing to leave the company. The new development in Lake Nona will be called the Disney Regional Campus, and will be home to 2,000+ jobs from the Parks, Experience, and Products division.

In the Theme Park Enjoyment Index for February, we mentioned that the Star Wars: Galactic Starcruiser had begun doing sailings for invited media. On March 1st, the very first paying guests were able to experience the Starcruiser for the first time.

This Fine Blog Series will be covering the Starcruiser in depth over the course of the year, including the antics of one Len Testa. The immersive storytelling and Cast Members being allowed to truly shine seem to be a huge hit with everyone who has experienced the Starcruiser so far. 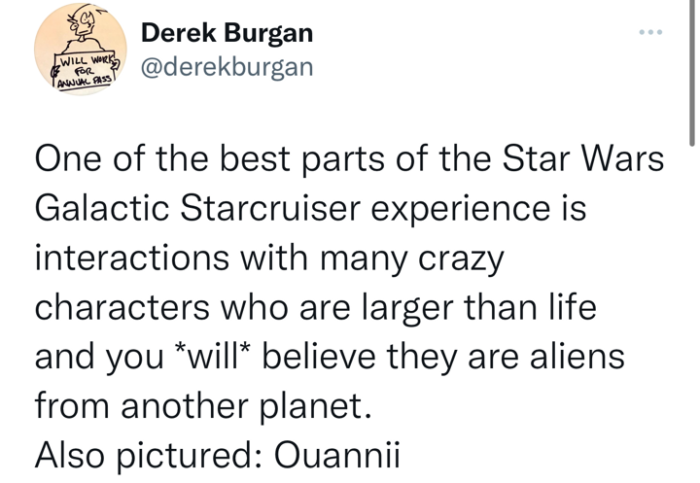 Our next area shows the Starcruiser (top right) in relation to Star Wars: Galaxy’s Edge in DHS.

Let’s stay at Walt Disney World for a bit and head on over to EPCOT.

I love shots of the Disney Skyliner.

Here at the SATURDAY SIX we are still in mourning over the passing of Shrek 4D, but as Universal prepares the area for an upcoming attraction based on Minions, long time theme park fans got a brief bit of nostalgia. As the signage was being removed from the outside of the Shrek 4D show building, older attraction posters were revealed, including one for the Murder, She Wrote Mystery Theater. You can read more about the Murder, She Wrote Mystery Theater (along with other attractions such as Kongfrontation, Alfred Hitchcock Presents: The Art of Making Movies, and Back to the Future: The Ride) in SATURDAY SIX: 6 Attractions We Miss at Universal Studios Florida.

The Murder, She Wrote billboard did not stay up for very long. Not long after the aerial was taken, Bio was on the ground taking shots of the park and it had already been removed.

While we are in the area of Universal, let’s check out some gorgeous aerials taken at twilight.

We have several Universal Mardi Gras articles planned for later this month, including a detailed look at the incredible Tribute Store next week.  Today we have Bio’s overhead shots of the incredible Mardi Gras parade winding its way through the streets of Universal Studios Florida.

Well today we get to see the speed of two different companies at work. Above we got the current state of the Journey of Water: Inspired by Moana attraction at EPCOT, and below we are going to check out what is going on with EPIC Universe, Universal’s latest theme park resort. These two projects may finish at the exact same time.

Okay let’s check out what will surely be one of the biggest draws to Epic Universe, the area for Super Nintendo World. Be sure to follow Alicia Stella over at Orlando Park Stop for all the latest news and rumors for Epic Universe.

We closed the Epic Universe section with one of my favorite photo types from @biorecontruct. Bio’s Very Wide Photos reveal so much that I just can’t get enough of them and below is one which features many Disney buildings including Expedition Everest, The Walt Disney World Swan, Spaceship Earth, and the Guardians of the Galaxy: Cosmic Rewind show building.

So there you have it: The SATURDAY SIX Takes Flight with @bioreconstruct! See you next weekend for the latest installment of the SATURDAY SIX, where we’ll look at something fun from the world of Disney and Universal. If you enjoyed yourself, be sure to check out the THEME PARK ENJOYMENT INDEX, giving a monthly recap of all the theme park news you need to know (and a lot more you don’t need to know, but we’re gonna tell you anyway). You can also follow Your Humble Author on Twitter (@derekburgan).

The SATURDAY SIX Presents: Our favorite @bioreconstruct photos of 2021

The SATURDAY SIX Presents: Our favorite @bioreconstruct photos of 2020