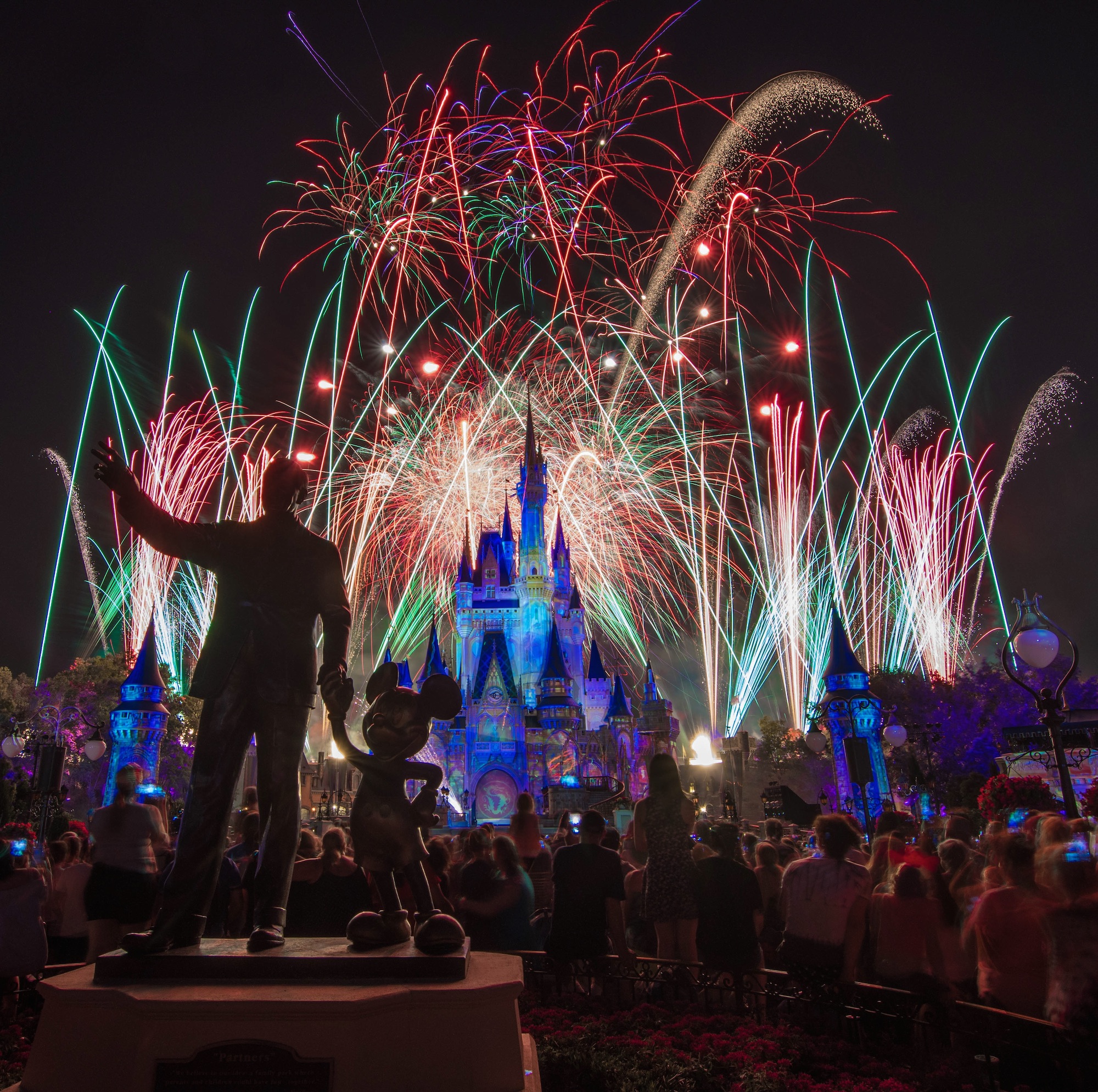 This week’s SATURDAY SIX takes a look at The Six Highest-Rated Shows and Spectaculars at Walt Disney World! You may remember last week on the SATURDAY SIX where we took a look at the six highest-rated rides at WDW, as voted on by you. This week Len Testa, the grand poobah of TouringPlans, has sent down the  thousands-and-thousands of survey results for the highest-rated shows and spectaculars. We’re looking at pretty much anything that isn’t a ride outside of meet and greets. Next week we will finish with our look at the surveys by glancing at the lowest-rated attractions, but today we’re going to take a look at the shows which always bring a smile to our face, and let’s kickoff the countdown with…

Epcot’s IllumiNations: Reflections of Earth can be a controversial subject within the Disney fan community. Here at the SATURDAY SIX we’ve had articles touting it as a one-of-a-kind experience that we’ll probably never see the likes of again, but have also made the case that the long running show could possibly use a little freshening up. One thing I personally love about IllumiNations, especially compared to just about everything else that made the list, is the fact that you don’t have to camp out an hour or more to get a good viewing location. There are so many places around World Showcase to get a good spot that lets you take everything in, including several places where you can enjoy a meal during the show. In an age of Disney where we are getting IPs shoved down our throats, it is refreshing to take in a show that isn’t trying to sell you a “brand” and is just there to deliver a powerful story (what that story exactly is, I can’t tell you, but it is powerful, or at least loud.) During the 4th of July week and around Christmas time, IllumiNations goes up another notch and becomes one of the most amazing fireworks displays you’ll see anywhere.

If Star Wars: A Galactic Spectacular is our first taste of the effort Disney is going to put into the upcoming Star Wars: Galaxy’s Edge, we are in for a treat when the land opens. Disney has perfected the art of projection mapping, and the events of the Star Wars franchise being displayed across the facade of Mickey’s Runaway Railway (too soon?) is just fantastic. Meanwhile you have fireworks going off, a booming John Williams score, and as Dr. Evil would say, “frickin’ laser beams” shooting all around. It is a sensory overload and it is amazing for a regular person and almost a life changing experience if you are a Star Wars fan.

With elaborate floats, stunning costumes, and filled with many of our favorite Disney characters, the Festival of Fantasy parade immediately joins the list of all time great Disney parades including Mickey’s Boo to You!, SpectroMagic, Tapestry of Nations, and Mickey’s Soundsational Parade. The larger than life floats will draw your attention (all themed as if they were built by residents of Fantasyland) but for us it is the wonderful detail in all the walk around characters that really make the show stand out. Many of these characters interact with the crowd, which can make every performance special for many guests. The soundtrack for the parade is top notch, using some of the most popular songs in the Disney library from movies such as The Little Mermaid, Tangled, and Brave. For us, the standout of the show is the jaw-dropping Maleficent float that breathes fire. Great characters, great floats, and a great soundtrack, the Festival Fantasy truly has it all.

This is another controversial pick in the world of theme park blogging, but Your Humble Author speaks for the working man and feels pretty confident that your average human being (AKA not a blogger) loves Fantasmic! This is what a nighttime spectacular is all about. Nothing against the other nighttime shows, but I’ve seen good fireworks shows outside of Disney. However, I’ve never seen anything quite like Fantasmic! This is theme park innovation at its finest and combines lasers, fireworks, flames, tons of Disney characters, and a storyline that is next level bananas. It’s the classic story of good versus evil told in the most confusing and complicated way possible, but it works.  One of the things which stood out to me the most on my first sailing on the Disney Cruise Line, was that it included a show in which Mickey Mouse got to be the hero. We like Mickey Mouse. We LOVE Mickey Mouse. In Fantasmic, Mickey gets to be the star, and it’s awesome.

We mentioned earlier that the projection mapping in Star Wars: A Galactic Spectacular is just plain amazing. Well, a funny thing happened. Happily Ever After came along and said, “hold my beer.”

Using artwork created specifically to interact with Cinderella castle, Happily Ever Show is the nighttime spectacular you always wanted, and then some. What that means is the castle isn’t just used as a giant movie screen anymore, and instead has the story woven into the nooks and crannies of the actual architecture itself. It is a triumph of Imagineering and shows exactly why Disney is the big dog in the theme park world.

We get the classic Disney characters in HEA, but it was a nice surprise not only to see characters we’d never expect to see in 2017 (such as Quasimodo from The Hunchback of Notre Dame), but many others from newer films that just don’t have a huge presence on property (such as The Princess and the Frog, Ratatouille, Wreck-It Ralph, and Zootopia.) Like Festival of Fantasy, many of our favorite songs are played such as “You’ll Be in My Heart” (Tarzan,) “The Bare Necessities” (Jungle Book,) and “You’ve Got a Friend in Me” (Toy Story.)

Then come the fireworks.

By now you know that Disney knows how to do fireworks, and they combine with the show in front of you to be a mesmerizing performance. You’ll need to work for a great view of Happily Ever After (or spring for a dessert party with reserved viewing) but it’s worth it. Don’t take our word for it: here is Len Testa’s review!

Don’t send the hate mail, but I’m in the camp which believes that Festival of the Lion King isn’t even the best show at Animal Kingdom (I’m in the Finding Nemo: The Musical camp.) That said, I’m also the only one in my family that feels that way, as all the rest all agree that Lion King rules them all. I will also admit that Lion King has a couple intangibles that Nemo can’t touch.

For one, the Lion King stage show now takes place in Harambe Village, one of the single greatest “lands” at any theme park in the world, and getting a sugar cane mojito at the nearby Dawa Bar before the show is one of our Must Do’s. While Nemo has some very good songs in its show, Lion King comes from the same era as Beauty and the Beast and contains some of the most well known tunes in the Disney songbook (in fact Lion King had three of the five songs nominated for Best Original Song at the 1994 Academy Awards including the winner, “Can You Feel The Love Tonight”.) One of the only downsides to Nemo is that the show does slow down during some parts, which could make some of the younger set restless, whereas as Lion King is always moving along at a brisk pace.

There is a wide mix of stuff going on during Lion King, with acrobats and fire twirling mixed in-between the singing and dancing. Throughout Lion King there is a ton of audience participation, including kids walking around with the performers at the end of the show. Other theme parks put on shows, but none of the them put on one with the pageantry and overall scope of Festival of the Lion King.

NOTE: We made the parades and nighttime spectaculars at hard ticket events ineligible for this particular list, but do know they all rate extremely high on TouringPlans surveys. Something to consider when looking at the high prices of a ticket to Mickey’s Not So Scary Halloween Party and Mickey’s Very Merry Christmas Party.

So there you have it:  The Six Highest-Rated Shows and Spectaculars at Walt Dsiney World! See you next weekend for the latest installment of the SATURDAY SIX, where we’ll look at something fun from the world of Disney and Universal. If you enjoyed yourself, be sure to check out The Magic, The Memories, and Merch! articles, or, for your listening pleasure, check out the E-Ticket Report podcast. You can also follow Your Humble Author on Twitter (@derekburgan).

Special Thanks to crack staff photographer Brandon Glover, my personal protege Hunter “Elvey” Underwood, Mr. ‘Ohana Tim Grassey, the new King of Theme Park Instagram Travis Terrell, photo Wunderkind Mike Sperduto, the Sommelier of Tony’s Town Square Brian Carey, and blogger to the stars Megan Stump for their invaluable assistance with this article. Be sure to also check out Brandon on The Park Blogger podcast with goofballs co-hosts Aengus Mackenzie and LitemAndHyde , while fellow Potterheads may enjoy Meg’s work on the Central Florida Slug Club.