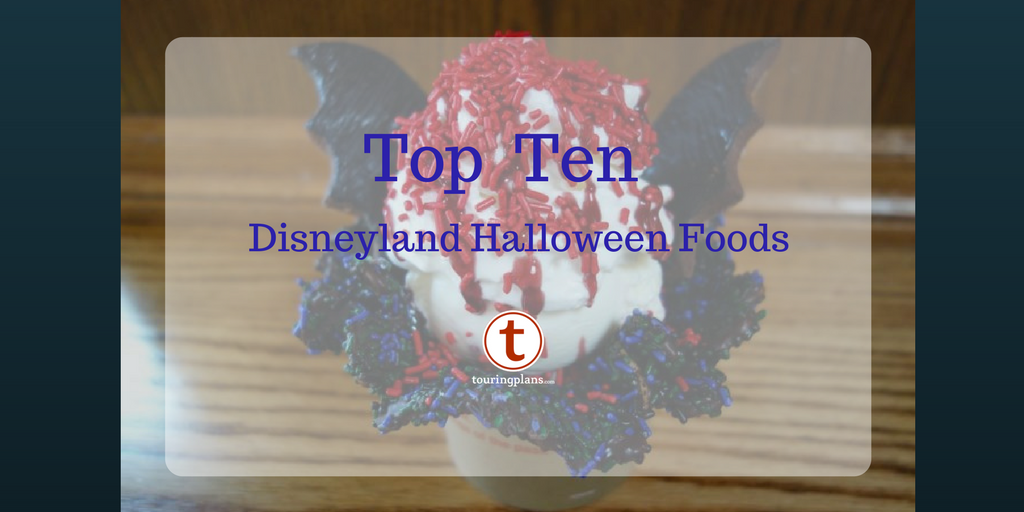 The core of this treat is still the standard soft-serve ice cream that you can purchase all year at Cozy Cone Motel in Cars Land. But the appeal of “eating the season” can not be understated here. First off, soft-serve ice cream is delicious. Second, strolling around Cars Land while eating ice cream covered in bright orange just feels right. Look at the treats pictured above and I think you’ll agree that the candy artists of Disneyland Resort will never receive the amount of praise that they deserve. Sure, underneath it all is standard cake pops, Rice Crispy treats, and marshmallows. But wow, it’s like eating art. I especially like the mummy Mickey. It’s easy to dismiss this as a standard doughnut that can be obtained from any local mom and pop doughnut shop… I mean it pretty much is but hey, we live in the era of fancy trendy expensive doughnuts BUT at least this one is nice and fluffy, filled yummy marshmallow cream, tastes great, and most importantly is extremely photogenic. I don’t know if the Mike Wazowski doughnut is genuinely popular, or if Disney only makes like 10 of them a day, but either way it’s constantly sold out. If you want one you should try to head to Schmoozies as early as possible. I feel like I shouldn’t like the Slow Burnin’ Mac & Cheese Cone as much as I did. The mac and cheese is standard Disney buffet-style (aka, it kind of sucks), the cone itself is bland tasting, and there’s no special Halloween packaging. But for some reason everything comes together so well visually with the black cone and neon orange “cheese.” Plus, the crushed Flamin’ hot Cheetos on top of it makes the mediocre mac and cheese actually taste pretty good. Overall I enjoyed it. First of all, it may sound insane to call a $7.49 ice cream sundae a bargain but this thing is hefty and can easily feed two people. The star of the show is the two scoops of white chocolate raspberry swirl ice cream. The ice cream is an exclusive flavor for Disneyland that is made by a local manufacturer, not the typical Dreyer’s ice cream usually sold at DLR’s ice cream shops. The taste of the ice cream alone is fantastic, but then you have all of the other parts of the sundae–the chocolate and sprinkle-dipped cone bowl, chocolate bat wing cookie, sprinkles, whipped cream, and berry sauce. It’s photogenic and tastes as good as it looks.

4. S’mores Churro from the churro cart in Critter Country Churros are one of the most popular Disneyland treats of all time, but besides a very brief moment in the mid-90s the park has never offered more than the standard cinnamon and sugar flavor. Thankfully that has changed in 2017. So far all the new flavors have been on point. The latest is this S’mores churro which is covered in graham cracker dust, and includes marshmallow and chocolate dipping sauce. It’s delicious. The warm and gooey sauce goes together perfectly with the churro. I really hope they keep this beyond the Halloween season. I have a huge weakness for cute food that looks like things. Tokyo Disneyland excels at creating cute foods. Thankfully the American parks are slowly introducing more food items like that, including this fantastic Spoke-y Cone Macaron. It goes perfectly with the season, it matches the rest of Cars Land, and it’s delicious. The Spoke-y Cone Macaron is VERY sweet thanks to the buttercream marshmallow filling. The Candy Cone Pie is filled with vanilla, butterscotch, and white chocolate pudding. This item would be number 1 by a mile if I was ranking these food items on taste alone, because it’s incredible. But due to the size and price I had to knock it out of the top spot. The Mini Candy Cone Pie is almost $6 and is so small that it can easily be finished in 3 bites. But damn is it good. I did not expect a non-dessert item to top this list, but the taste and quality of the Car-achnid Pot Pie blew me away. The crust is flaky and buttery. The chicken pot pie filling inside is hearty, rich, and creamy. It’s impressive that mass-produced theme park food can taste almost homemade. This is another item I hope Disney adds to the permanent menu, but also a part of me hopes they don’t because then I’ll just want to eat pot pie all the time. This Tres Leches Parfait, from the Coco-inspired menu at Paradise Garden Grill, may look pretty but it’s so so bad. I was expecting a light and flavorful dessert, but instead found it to be very bland and dry. Save the $6 and buy anything else.

There are many more Halloween food options available around Disneyland Resort. Disney has the full official list here. Let me know what you’ve tried and liked or disliked in the comments below.