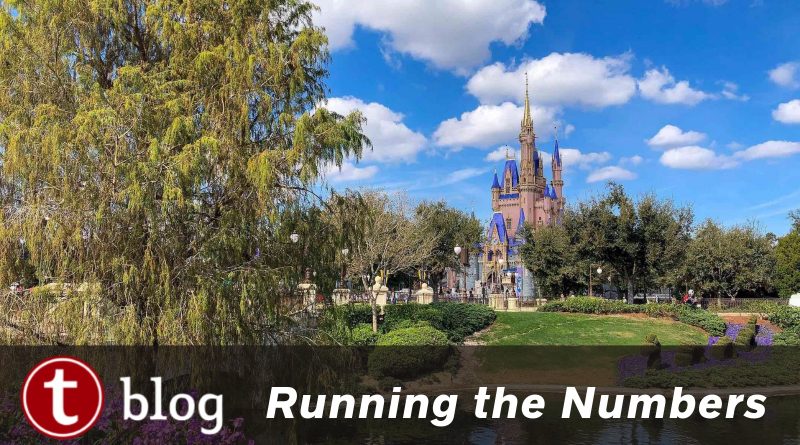 Half of my family believes that rope drop is part of the mystique of a Disney vacation.  They live for the thrill and challenge of the fastest sunscreen application relay, the eating a granola bar while running down the stairs hurdles, and the “it’ll be faster if we walk instead of waiting for the trams” sprint.  The other half believes in sleeping in. Recently I took a look at wait times for late arrivals to the Magic Kingdom. This virtual testing suggests that right now it is often possible to arrive at the park well past opening with at most an extra half hour in lines.

Falling wait times later in the day were a key to arriving late and still touring efficiently, and this is a pattern that the team has seen at all the parks during in-park testing.  In the absence of nighttime entertainment, visitors currently have little to keep them in the parks once they run out of steam.  There’s also not much value to returning after a break for dinner in the park and a few more rides before the fireworks, when there are no fireworks.  We don’t know whether this pattern will hold up once things return to more normal operations, and I’d love to come back and revisit this question then.  Whenever you’re visiting, here are the basics of how to test out late arrival scenarios and see how much they’ll impact your wait time.

We’re going to use features that are only available on the website version, so start at your dashboard or the Personalized Plan page.  If you’re on a mobile device, just access the page in your device’s browser (this will work better on a tablet than a phone due to  screen size).  You can start by copying an old plan or a premium plan, or Angela gives a walk through below for setting up a plan from scratch.

Tip: one of my favorite tricks is to set the Walking Speed one notch slower than my actual preference. I find this builds in just enough slack time to grab a snack or go to the bathroom without having my plan get off track.

Step 2: Optimize and set the baseline

Click Optimize once your plan is all set, and take a look at the summary line on the bottom of your current optimization. This summary line is only available on the website. Hopefully you see that the Free time is not zero, as that gives us something to work with.

Now you have a decision to make.  Do you prefer continuous touring, going straight through the list and leaving when you’re finished? Or are you okay with having to take a break in the middle if it lowers your total time in lines?

To get the absolute minimum line time even if it means breaking up your touring, use the plan you just optimized as your baseline.

For continuous touring, we’ll need to adjust the plan’s end time to eliminate time marked as Free (scheduled meals and breaks are counted as Busy).  Rounding is fine; the Line time is going to bounce around a bit when we re-optimize so this is not an exact science. Go back to the top of the plan and edit the end time — in this case, I’ll remove about 2 hours to get rid of the 142 minutes.

Optimize the plan again and check the totals.  You should now see that there is very little, if any, free time.  Don’t worry if you see warnings about a couple of steps happening after your plan ends — remember that the current “end” time is still before you need to leave the park.

For continuous touring, this re-optimized plan is going to serve as your baseline.

Now test out later arrivals by editing the start time and re-optimizing.  You’re not looking to find the perfect minute; jumping ahead an hour at a time should be effective, or even two hours at a time if you’ve got a short plan and a lot of space in the day to work with.  Don’t panic if you see that the Line time jumps up the first time you move the start time! Sleeping in without a wait time penalty is not the same thing as being able to arrive any time you want; we saw frequently in the test data that arriving only an hour after opening was not effective compared to arriving two or even three hours later. If you’re looking for continuous touring, remember that you’ll need to adjust the end time in sync with the start time.

Keep advancing the time until you find something that suits you or it’s clear that a later start will not allow you to finish your plan.  If you decide that you want to go back to an older plan, or if you just can’t remember what the last set of numbers was, “Activate Old Result” was introduced in late 2019 and is kind of like an undo button for the optimizer. Its’s only available on the website, but it has rapidly become one of my favorite features because it takes all the fear out of trying out a different plan in hopes of something better.

It’s easy to bounce between the versions and compare the Plan Totals summaries to your baseline to decide whether rope drop is your best option or not.  The small dot to the right of the result shows you which one is active, but these old versions don’t stick around for more than a few days, so make sure to re-optimize whichever one you pick so that it pops up to the top.  Don’t forget that you’ll also need to re-optimize a day or so before park arrival for the best results.

That’s it!  You’re done!  Hopefully you found a late arrival time that works well.  If not, you can at least feel more confident that waking up so early really was necessary to get ahead of the lines.

Are you committed to rope drop? If you wanted to arrive late, would you try to pick the best time in advance, or just go with a show-up-when-you-get-there strategy?  Let us know in the comments!