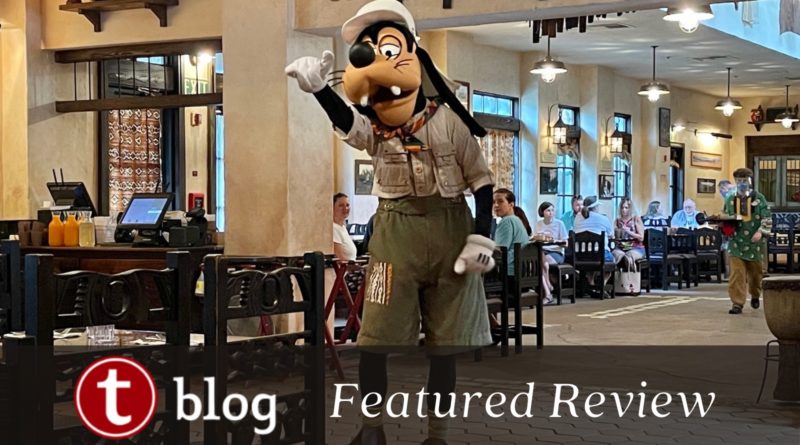 The latest Walt Disney World restaurant to reopen and join the “herd” is the Animal Kingdom favorite – Tusker House!

Tusker House is a colorful, marketplace-themed restaurant at Animal Kingdom’s Africa. Before the COVID-19 closure, Tusker House was a character buffet offering both crowd-pleaser standard dishes and African cuisine. 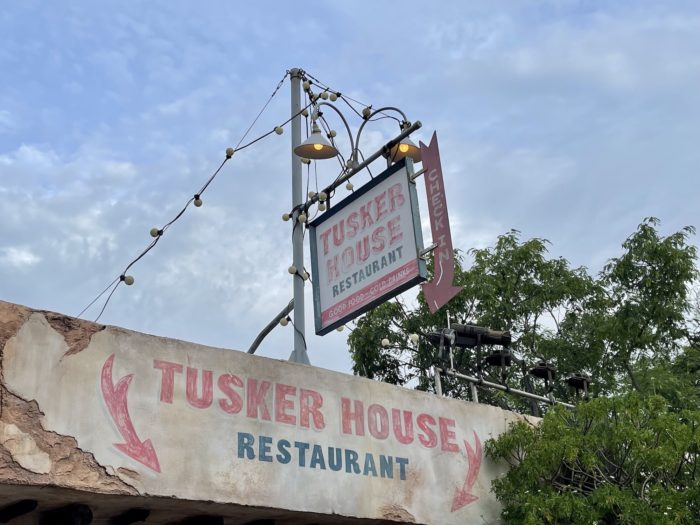 And while the characters have returned, albeit in a modified fashion, the buffet has been overhauled into an all-you-can-eat family-style meal priced at $42 per adult and $27 per child.

While this Animal Kingdom restaurant serves breakfast, lunch, and dinner, our in-park reporter Chrissy visited the modified Tusker House for the most important meal of the day where she met Mickey, Donald, Daisy, and Goofy in their safari outfits! 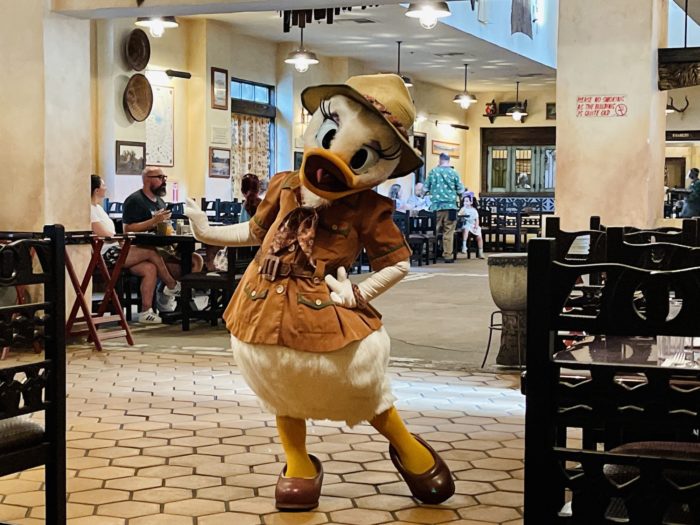 The characters themed outfits are a huge part of Tusker House’s appeal since you probably won’t see Mickey and the gang in their “adventurous” apparel anywhere else on property.

Tusker House currently offers indoor seating only. Tables aren’t spaced from each other, but they are arranged around the edges of the room to allow the characters to move down the center. 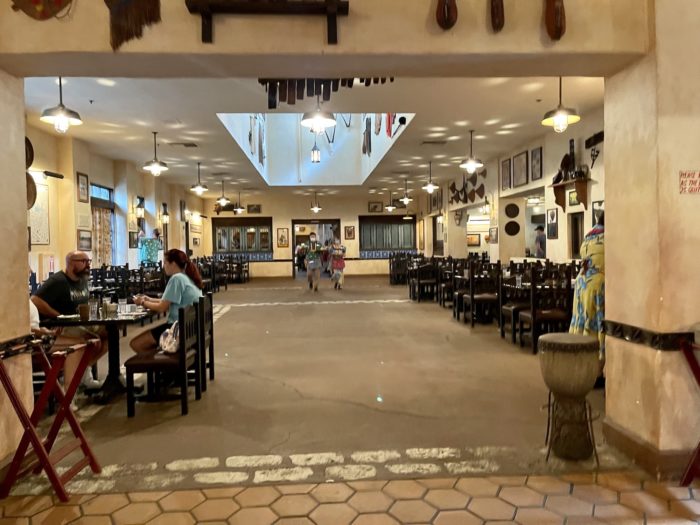 But like other character meals at Walt Disney World right now, the characters can’t come to the individual tables and Cast Members advise guests not to walk around when the characters are present. 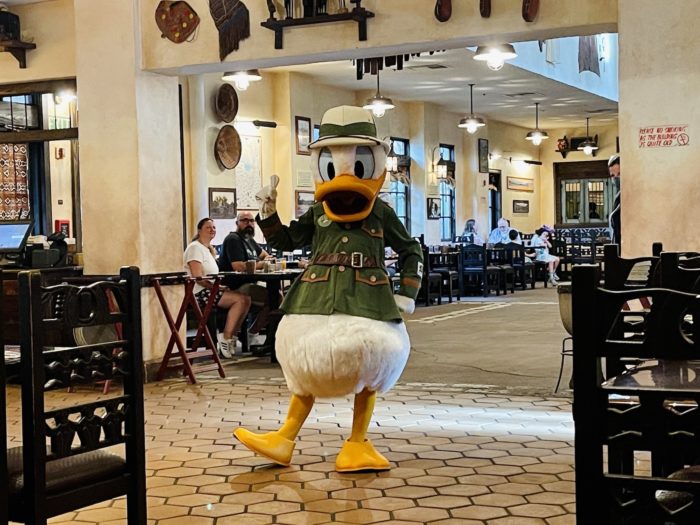 Now you can stand up in order to get a selfie, but just be sure to stand at your table. Also, the character roster is the same regardless of the time of day, and Minnie is not included. She isn’t on the autographed postcard guests receive either. 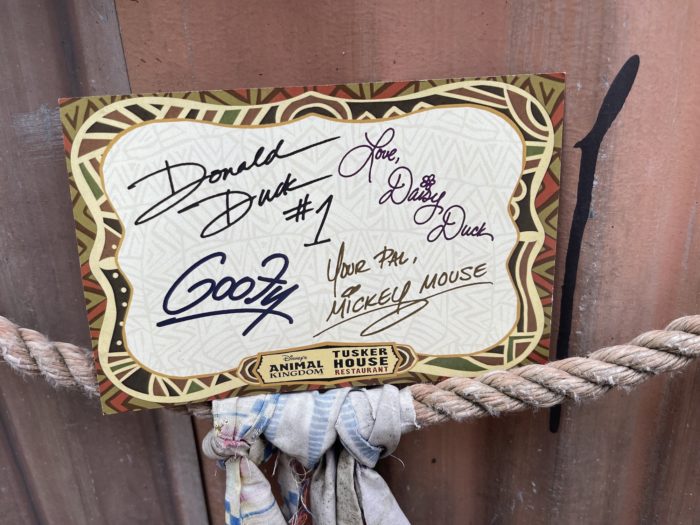 If you’re looking to dine at Tusker House during your vacation, we strongly suggest booking a reservation at least 60 days out. But if you’re already within that window, consider using the TouringPlans Reservation Finder.

Tusker House had staff lined up at the entrance to clap for guests coming in. Everyone was excited and several folks admitted to being rusty. With a restaurant open only for an hour, it’s not a surprise that there’s some hiccups. In this case, it came in the form as a less-than-awesome Bloody Mary. Chrissy says she’ll try it again in the future and feels that the mediocre quality was just re-opening-day jitters. 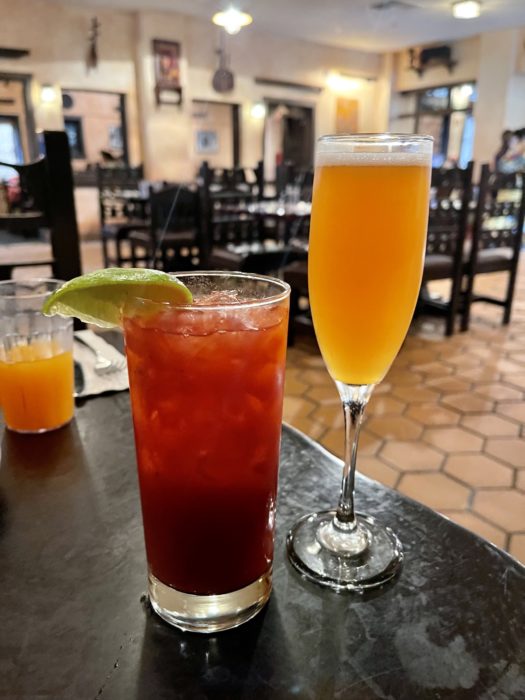 Something worth mentioning is that Tusker House’s menu also offers non-alcoholic specialty drinks with an average price of about $6. Teetotalers have their choice of a Coconut Elixir to the Wild Strawberry Lemonade to the Lava Smoothie. 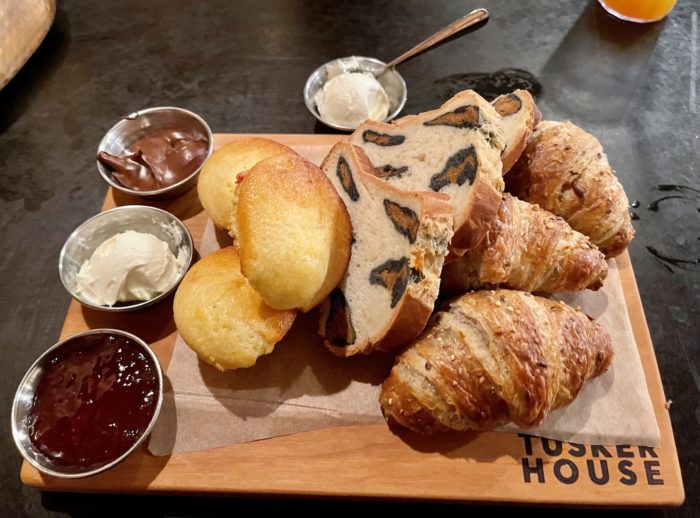 A basket of breakfast pastries is part of the family-style offerings and consists of Safari Bread, multigrain croissants, and cornbread along with whipped butter, Chocolate-Hazelnut spread, and strawberry preserves.

Chrissy says the Safari Bread was basically a brioche. It was decent but firm in texture in order to achieve those spots. But still, it had a good flavor. The cornbread and croissants were just the usual. The spreads, while also good, aren’t anything she doesn’t already have in her pantry so nothing all that special or unique. 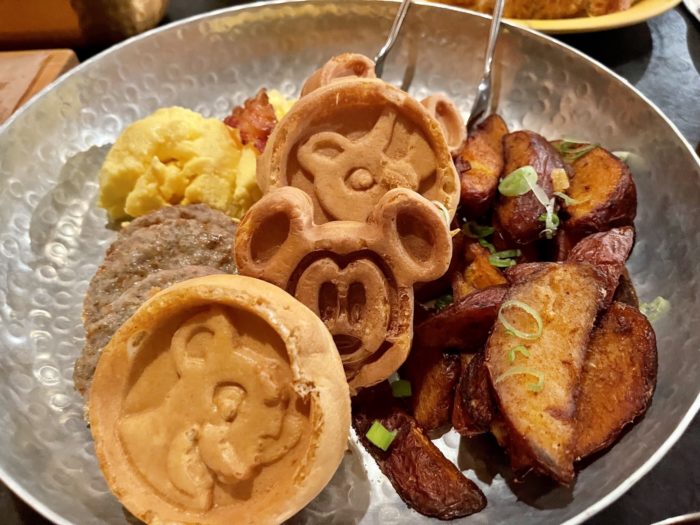 According to the menu, the Tusker House breakfast platter has scrambled eggs, Mickey and Simba Waffles, Durban Chicken and Egg Curry with Jasmine Rice, as well as bacon, sausage, and roasted potatoes. 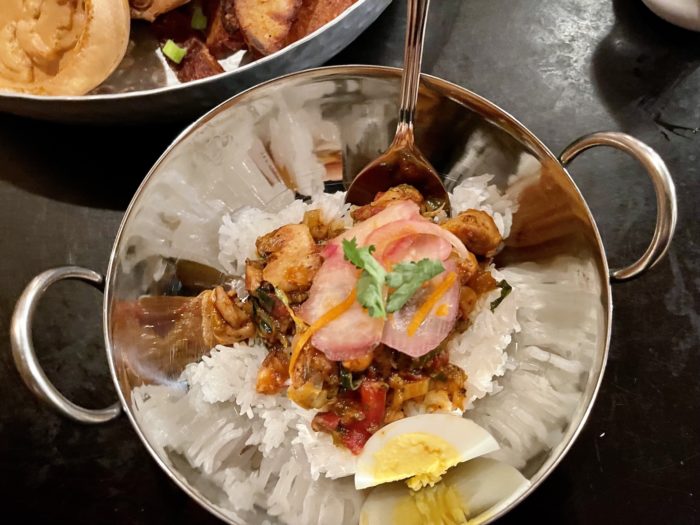 Everything on this platter is the same breakfast fare as pre-COVID with the exception of the Simba waffles and Durban Chicken and Egg Curry with rice. Naturally, the Simba waffles tasted like the Mickey ones, but the Durban Chicken and Egg Curry was off the charts lovely! This bowl of flavors is exactly what Chrissy says she missed about Tusker House food. It wasn’t the least bit spicy, but it was so delicious and had the same profile as so many of the things she’s missed from here and Boma at Disney’s Animal Kingdom Lodge. 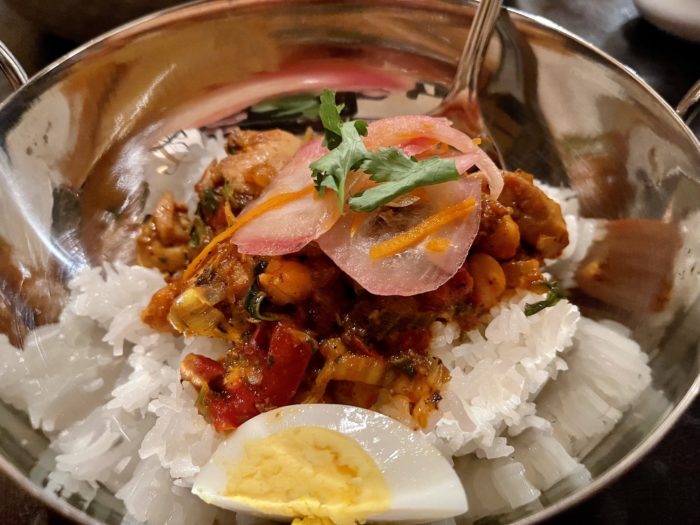 One note about the rice at breakfast and lunch – they must have a serious sticky rice cooker in the back somewhere as it appears 3 times in 2 meals and it’s just wonderful. As someone who would pick reheated pot roast for breakfast over the cutest waffle around, the curry was her favorite of the meal. The rest was just basic and sadly not special enough to keep Chrissy from imagining all of the people getting in line for Flight of Passage as she ate.

A Disney World classic, Jungle Juice, which is also called POG Juice, is a delightful, tropical blend of pineapple, orange, and guava juices and is a real thing amongst Disney fans.

This was the other flavor that made Chrissy feel like she was “back” even though the meal was set up differently and her old favorites weren’t on the table. 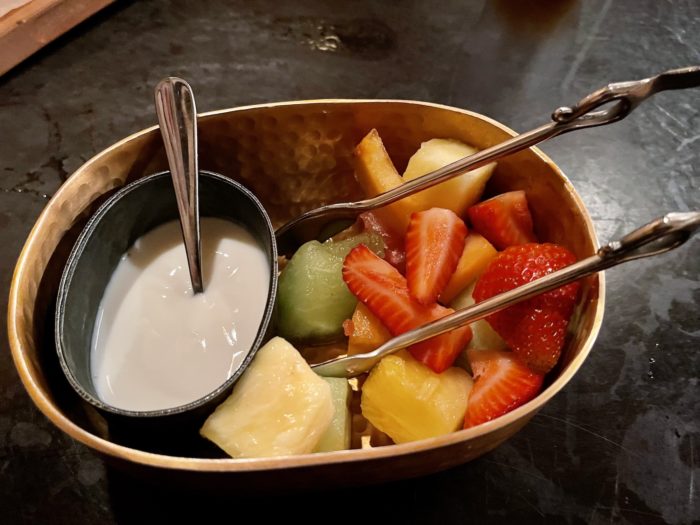 Tusker House also offers a platter of fresh fruit with a Honey Yogurt sauce to add some light, fruity flavors to the breakfast menu.

Lastly, like most restaurants at Walt Disney World, Tusker House also offers plant-based and allergy-friendly versions of these breakfast dishes upon request! 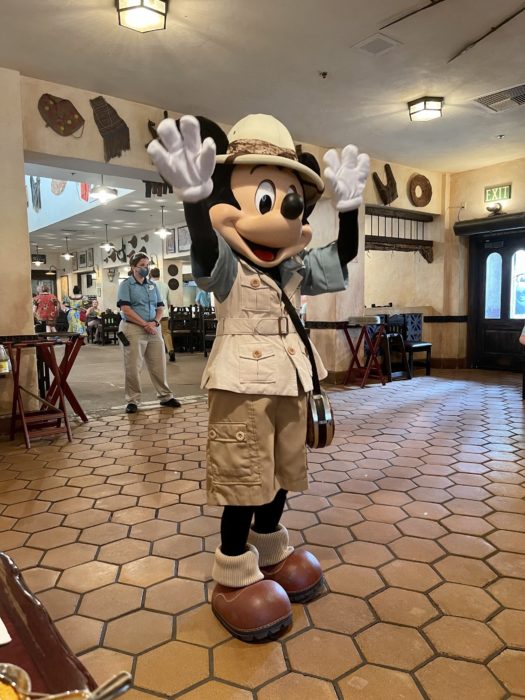 Chrissy’s recommendation? Skip breakfast,  go get in line for Flight of Passage, and then wait until it’s 95 degrees for a really wonderful lunch at Tusker House and some heavenly A/C.

Still, she was so happy to see the inside of Tusker House again and have some of those flavors back in her life.

Something worth noting is that even though Tusker House is family-style, everything came out hot. So what is Tusker House doing that Cape May isn’t? Odd.

Will you check out Tusker House during your next trip to Walt Disney World? Have you missed this popular Animal Kingdom restaurant too? Let us know in the comments!