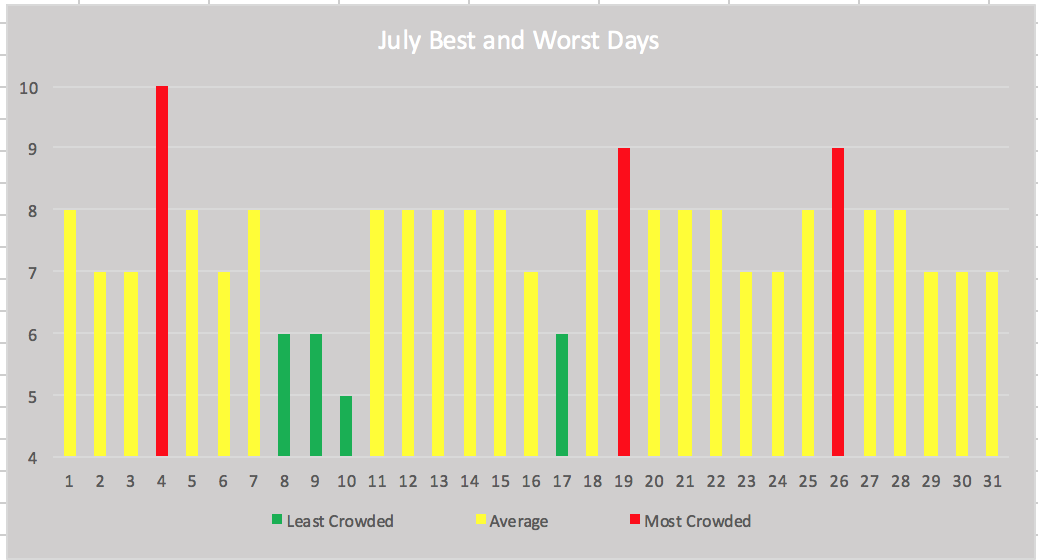 Welcome to TouringPlans’ preview for Walt Disney World for July 2016 – everything you need to know if you’re traveling to the Happiest Place on Earth next month. Who’s ready for July?

July in Orlando is HOT, but at least it’s a wet heat. Pack your light colored clothing, swimsuits, and lots of sunscreen. Plan to visit the parks early in the morning or late in the day to avoid the heat as much as you can and spend your afternoons napping or at the pool. Summer’s extended hours mean there is plenty park time available after dark, so take advantage of it, especially if you’re eligible for Extra Magic Hours.

Want to chat live about your trip? Join us on Facebook throughout the month as our experts take your questions in a fun and lively discussion.

July 1 — Overnight at the Air and Space Museum. Brian will be spending the night in Washington, D.C.’s Air and Space museum (not sleeping…hopefully) as part of the building’s 40th birthday. They will likely be short notice depending on timing and crowds, but there will be at least one live tour of some of the museum’s exhibits.

July is among the busiest times of year at Walt Disney World. Crowds peak on July 4th, but you’ll see most days at a level 7 or 8. For day by day park recommendations for travel during July, check out our Crowd Calendar.

Epcot saw major changes in June with the opening of Frozen Ever After at the Norway pavilion. This reimagining of the former Maelstrom attraction has brought long lines to World Showcase. Technical issues closed the attraction several times a day during its first few weeks open, and lines sometimes reached 300 minutes for stand by. FastPass+ is your best bet for experiencing Frozen Ever After.

Continuing the Frozen theme at Norway, the Royal Sommerhus meet and greet with Anna and Elsa also opened in June. This was the most hard to get character FastPass when it was at Magic Kingdom, though lines haven’t been quite as long at Epcot (because everyone was in line for Frozen Ever After?).

Finally, in non-Frozen news, Soarin’ at the Land is now Soarin’ Over the World. More capacity was added to the attraction to help with lines, but we’re happy to report Patrick Warburton is still your Chief Flight Attendant.

Frozen Ever After and Soarin’ are both Tier One FastPass selections at Epcot, which means you can only one of these per day there. The Anna and Elsa meet and greet is stand by only.

Summer means family travel, and a popular option for family (especially those that need a bit more space or privacy) is Disney’s Art of Animation Resort. We love this resort because of its pools, family suites, and dedicated buses. Unfortunately, Disney knows how popular Art of Animation is and prices it thusly. These rooms are the most expensive in the value category, and standard (non-suite) rooms in the Little Mermaid section are usually excluded from any discounts. Still we think these rooms are a cut above the other value resorts and really enjoy the space and clever decor of the Family Suites. We have a full review of Art of Animation, and our room finder to help you select and request the ideal room for your trip in our Walt Disney World hotels section.

Disney loves Frozen in summer (probably to help you forget how miserable the heat is). In this article, Seth Kubersky reviews Frozen Summer Fun from last year at Hollywood Studios. Star Wars has now replaced Frozen as the primary park franchise at the Studios, though For the First Time in Forever Sing-a-Long is still very popular.

If Art of Animation doesn’t work for your plans, Dani gives you the low-down on picking a Disney Value resort.

And if you want to save on your souvenirs as well as your accommodations, Derek Burgan and Julia Mascardo take you on a trip to the land of merchandise buyer’s remorse at the Disney Outlet stores. Here’s what was flying onto the shelves in May.