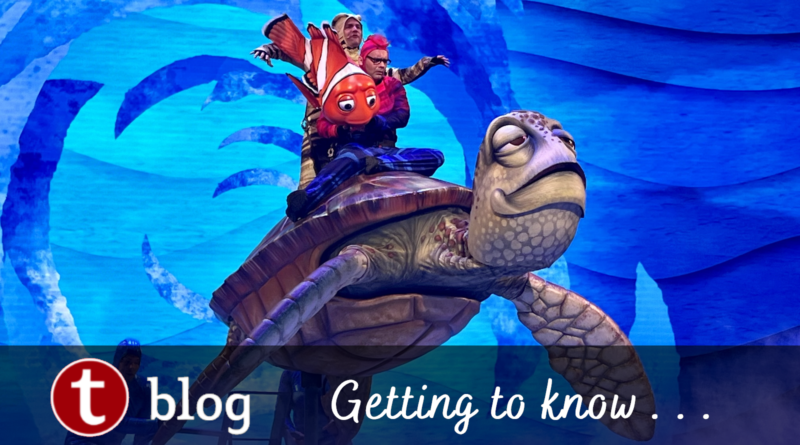 After more than two years, Animal Kingdom’s Theater in the Wild has finally reopened and with a reimagined stage show inspired by 2003’s Finding Nemo. 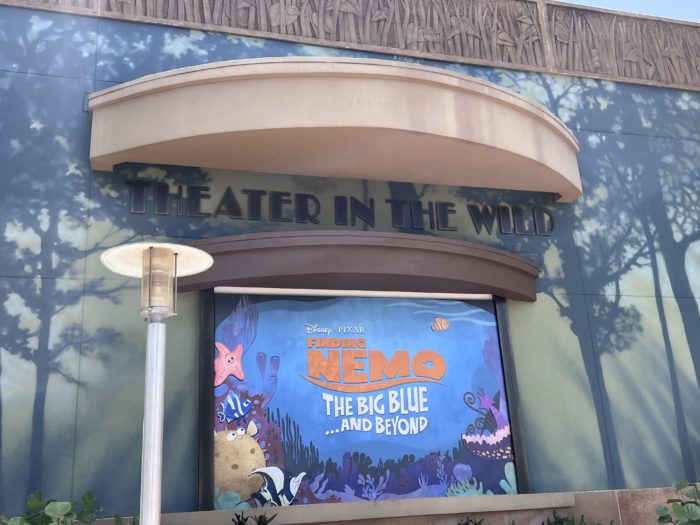 So if you’re curious about how this Nemo-themed show has changed or you’re looking to make The Big Blue… and Beyond part of your Animal Kingdom day, here’s a breakdown of everything you need to know: 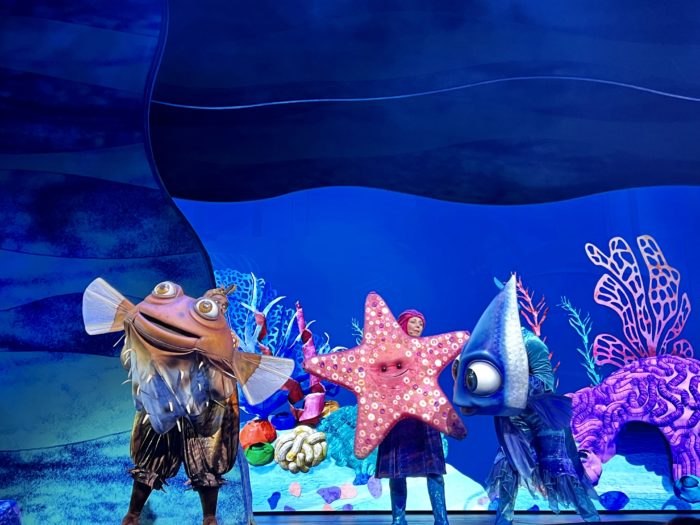 Much like the former show, Finding Nemo: The Big Blue… and Beyond features live performers with puppets and props coupled with large, animated backdrops to tell this Pixar tale. The theater also utilizes various special effects to simulate the big ol’ blue.

Also, in addition to a traditional standby queue, Finding Nemo: The Big Blue… and Beyond offers Lightning Lane.

Finding Nemo: The Big Blue… and Beyond is housed in Animal Kingdom’s Theater in the Wild which is located between Expedition Everest and DinoLand U.S.A.

Be warned that the path leading to the theater is relatively narrow. Arriving when a show is letting out will no doubt result in crowds and congestion. 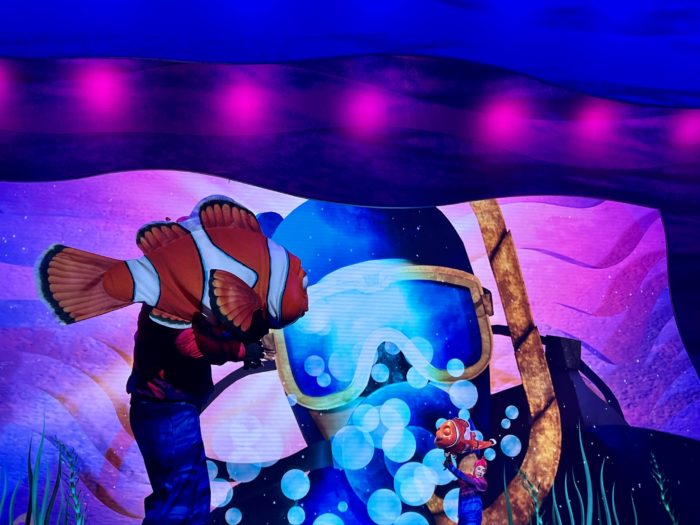 Catching the show mid-day is a great strategy as it gets families out of the heat; and for those visiting the park later in the day, remember that showtimes aren’t offered into the evening hours.

Animal Kingdom’s Theater in the Wild boasts 1,500 seats; and despite Lightning Lane users and a loaded standby queue, Chrissy and Gigi ended up with a whole row in the theater to themselves. 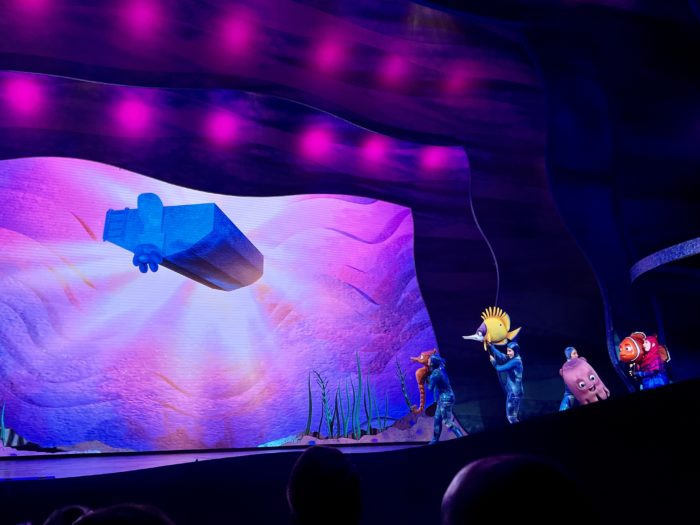 There truly isn’t a bad seat in the house, but Chrissy recommends that families sit close to the front and to the left of the stage. This way Cast Members can wave and interact with little ones. 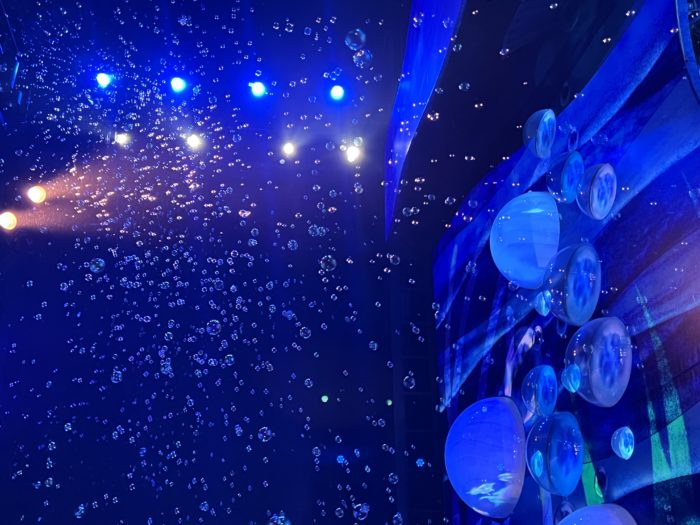 Now, even though these theater seats aren’t the most comfortable Disney has to offer, the dark and cool theater is a great way to cool off after a long, hot trek around Animal Kingdom. A Cast Member informed Chrissy that they keep the theater at a lovely 68 degrees. 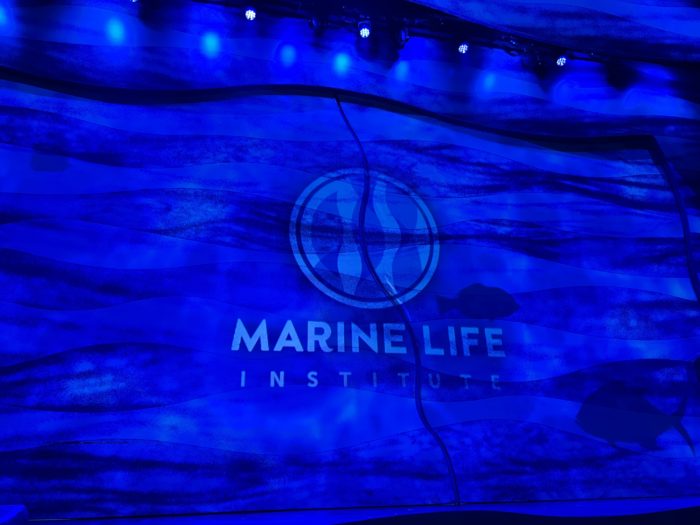 Unlike the original Finding Nemo – The Musical which was a 40-minute show, The Big Blue… and Beyond is considerably shorter at 25 minutes. 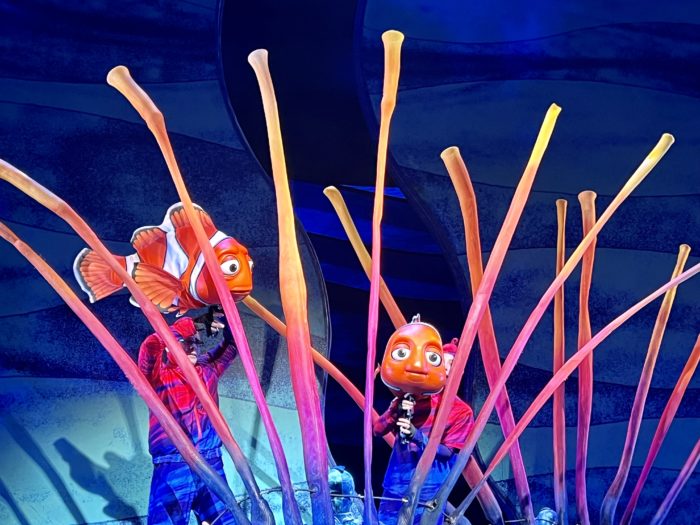 It also strictly follows the storyline from the Finding Nemo film and is told from the perspective of the tank gang at Dr. P. Sherman’s office.

Despite this show being a new iteration, it still includes original songs such as “In the Big Blue World” and “Go With the Flow” written by the award-winning Robert Lopez and his wife, Kristen Anderson-Lopez. Just for reference, these songwriting genius’ work has included Frozen, Coco, and even Marvel Studios’ WandaVision. 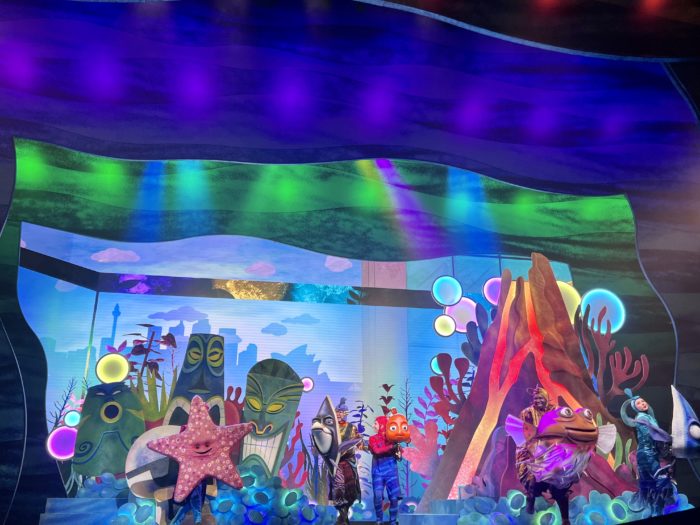 As for updates, the show now features a massive LED wall that extends physical sets on stage – including that of a 32 ft. sub! 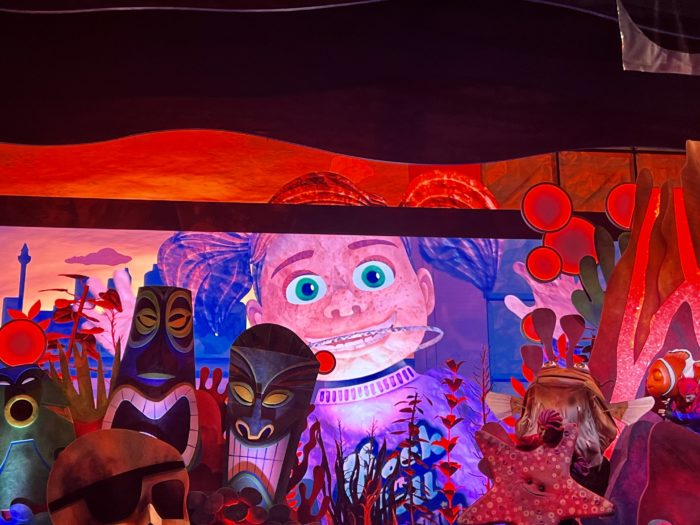 Even though nine-year-old Gigi was more meh in her take on the new show, Chrissy absolutely loved it.

According to her, it’s just adorable; and along with the graphics – which she notes are stunning – the actors are fantastic and show so much character! For instance, Marlin’s worry over Nemo was 100% evident on the human actor’s face. So well done and a fantastic option for families.

Are you looking forward to checking out this new version of the Animal Kingdom show? Let us know in the comments!

One thought on “What You Need to Know About Finding Nemo: The Big Blue… and Beyond”