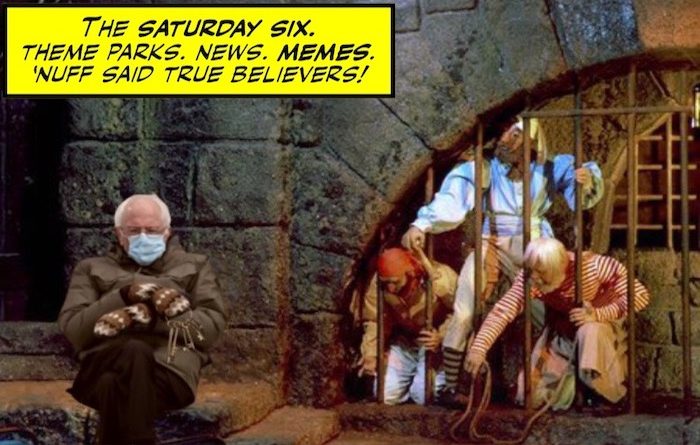 This week’s SATURDAY SIX takes a look at recent theme park news via memes! 2021 is just three weeks old, but boy has a lot happened during that time. Thankfully, the heroes and heroines of DisTwitter are making sure we get all the news we need to know along with a dash of lighthearted fun.

One thing that many theme park fans thought *should* happen, but never thought actually *would* happen is the Disneyland Resort doing something about their annual passholders. Unlike Walt Disney World in Florida – which has a much smaller amount of APs compared to regular day guests – Disneyland has a lot of APs because of the sheer amount of people that live within driving distance to the parks. That fact, along with Disneyland being the one park Walt himself walked in, helped Disneyland sell a ton of annual passes, despite having some huge price increases over the past few years.

With no clear end point for the coronavirus in sight, Disney needed to do something to prepare for when their California parks finally reopen, presumably with a limited capacity. When Walt Disney World instituted a park reservation system, it drew the ire of many annual passholders. Disneyland is surely going to implement a park reservation system to help handle capacity as well, and they would have a lot more angry APs if they didn’t rip the band-aid off now. To the shock of just about everyone, on January 14th Disney released the following statement:

DisTwitter created their own statements.

Others brought back popular meme formats to use with this story, such as the “how it started/how it will end” meme comparing the Disneyland AP to another relic from a long ago era. 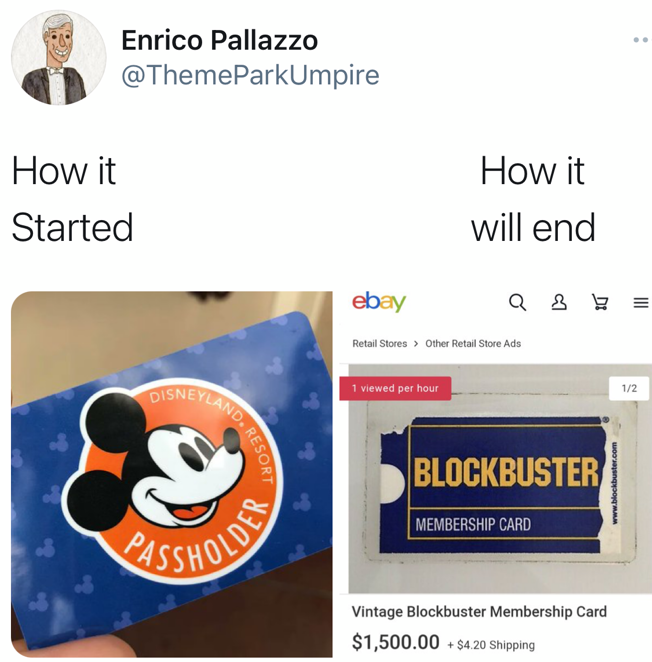 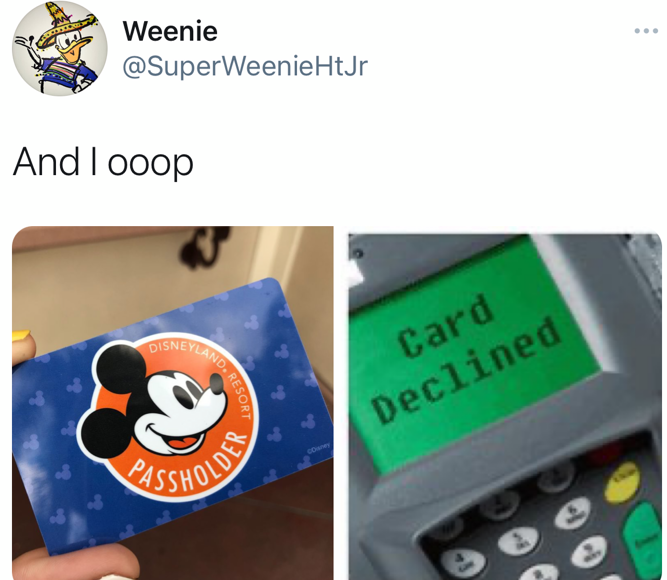 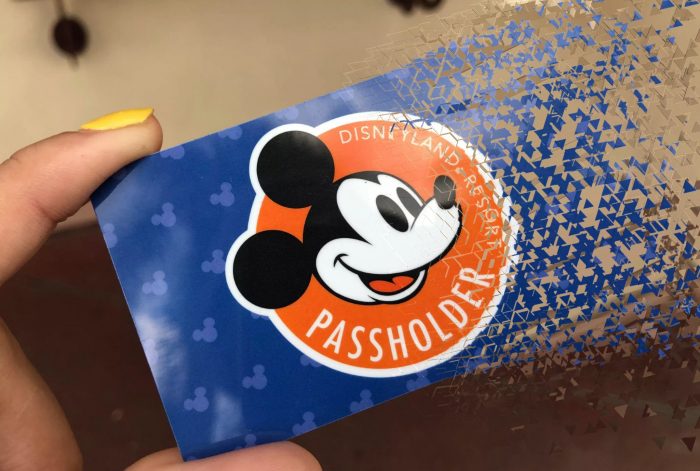 Sometimes you have to look at the bright side though. Yes, your annual pass is gone, but the good news is that you’ll soon* have that pre-paid money back in your bank account. (*Soon being a relative term as it took months for many WDW APs to get their money refunded when Disney allowed guests to cancel that option in 2020.) 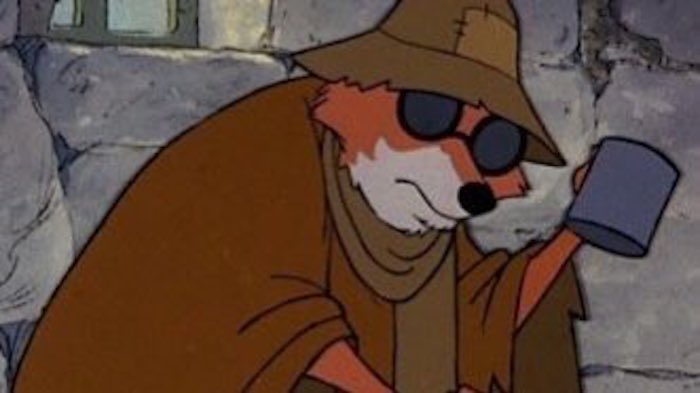 And if Disneyland doesn’t reopen to theme park guests, well we can still repurpose it into something useful..

Earlier this month Joe Rohde officially retired from Walt Disney Imagineering after 40 years with the company. With a resume that includes being the lead designer for the Animal Kingdom theme park, Animal Kingdom Lodge, and the Aulani Resort in Hawaii, Joe is possibly the most well known Imagineer to today’s casual theme park guest. For hardcore theme park fans, Rohde would be in the mix to be on the Mount Rushmore of Imagineering, along with names such Rolly Crump, Mary Blair, Marc Davis, Tony Baxter, Harriet Burns, and X Atencio.

In recent years, Rohde has been tasked with what could be considered impossible projects, and instead made them immediate fan favorite hits. When Pandora: the World of Avatar was announced for the Animal Kingdom, some scoffed at the idea of adding such an IP-driven land into a park based around conservation. However, from the moment Pandora opened, it was a huge hit with guests, with Flight of Passage becoming one of the most popular rides in theme park history. Meanwhile, after Disney bought the rights to Marvel, it was tasked to Rohde to shoehorn a comic book IP onto the Hollywood Tower of Terror attraction in Disney’s California Adventure. Guardians of the Galaxy – Mission: Breakout! took everyone by surprise by delivering a ride experience that was much more fun than its predecessor along with having great appeal to theme park, comic book, and movie fans with all the cameos, references, and Easter Eggs throughout the queue. 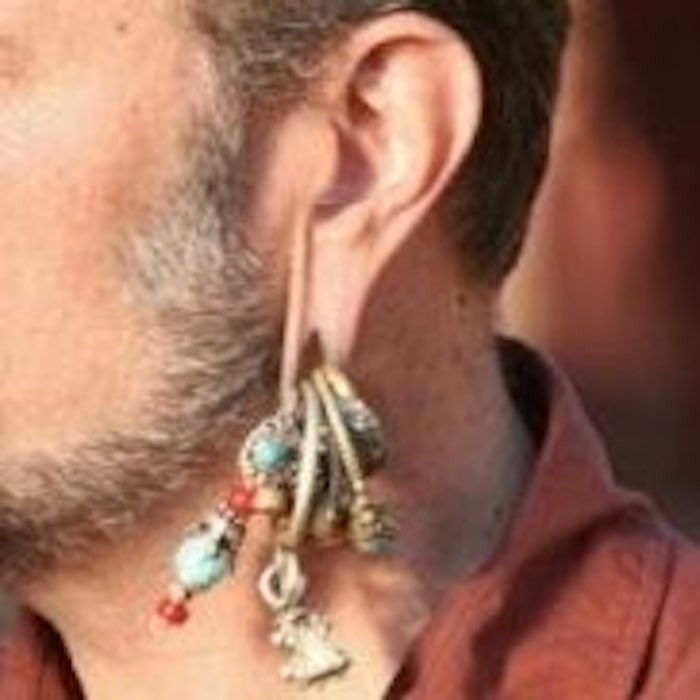 On the day of Rohde’s retirement, some of DisTwitter went down the rabbit hole after discovering the Pokemon character Klefki bares more than a passing resemblance to Joe’s iconic earrings. 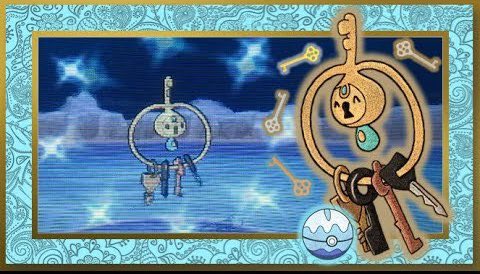 Readers of this fine blog series are used to delays in Disney construction projects. Hearing that the TRON coaster in Disney’s Magic Kingdom won’t open in 2021 wasn’t a huge surprise to most, but it was weird to see an opening in the large show building completely sealed off. Blog Mickey got the photo below which shows the track for the TRON coaster that appears to be going straight into a wall (which, granted, would probably still be more fun than riding Primeval Whirl again). Before it was sealed off, this area had a large opening and was a “portal” that guests will go through when entering the show building.

DisTwitter had a lot of fun with this one…

# 3 – The Absolutely Incredible Story of Another Caballero Dying at Gran Fiesta Tour (Seriously, This. Actually. Happened.)

You would think the Theme Park Turkey Award Winning story of Jose Carioca going down at Gran Fiesta Tour in EPCOT would be the last time we’d hear about that attraction for a while. NAY NAY. In the first week of January, Donald Duck was physically propped up due to some issues the audioanimatronic was having.

DisTwitter created a meme showing Roger Rabbit holding Donald in place. Normally, that would be the end of the story…however we’re not even close to that.

The next day, Donald Duck was removed from the attraction and what looked to be a memorial was put in its place.

DisTwitter had a lot of fun with this one, including using the “ghost” of Donald Duck as we saw in the Disney Sing Along Song Series: Disneyland Fun.

Eventually, even the memorial was removed. We don’t know what’s going to happen to Gran Fiesta Tour next, but we can’t wait to see it….

While those in California got the surprise of AP cancellations, we in Florida got shocking news of our own with Disney announcing that the popular Magical Express bus service would be ending later this year. We’ll wait to see what Disney plans for a replacement, but right now this seems like a short sighted move to save money. Magical Express kept people in the “Disney Bubble.” A bus would be waiting for you at the Orlando airport and would take you straight to your Disney hotel, where you could then use the various forms of Disney transportation (including busses, Skyliner, monorail, and boats) to stay on Disney property for your entire vacation.

On Disney message boards and Facebook, this announcement went over about as well as you’d think it would, with people flipping out. Adding fuel to the fire, DisTwitter memesmith @SuperWeenieHtJr came up with an iconic photo.

This  meme went viral, going everywhere on all forms of social media. Your Humble Author also shared it on Twitter. When sharing it, I did so via a RT, which showed people exactly who the meme came from. However, an Influencer must always remember the sage advice Uncle Ben gave Peter Parker, “With Great Power Comes Great Responsibility…” 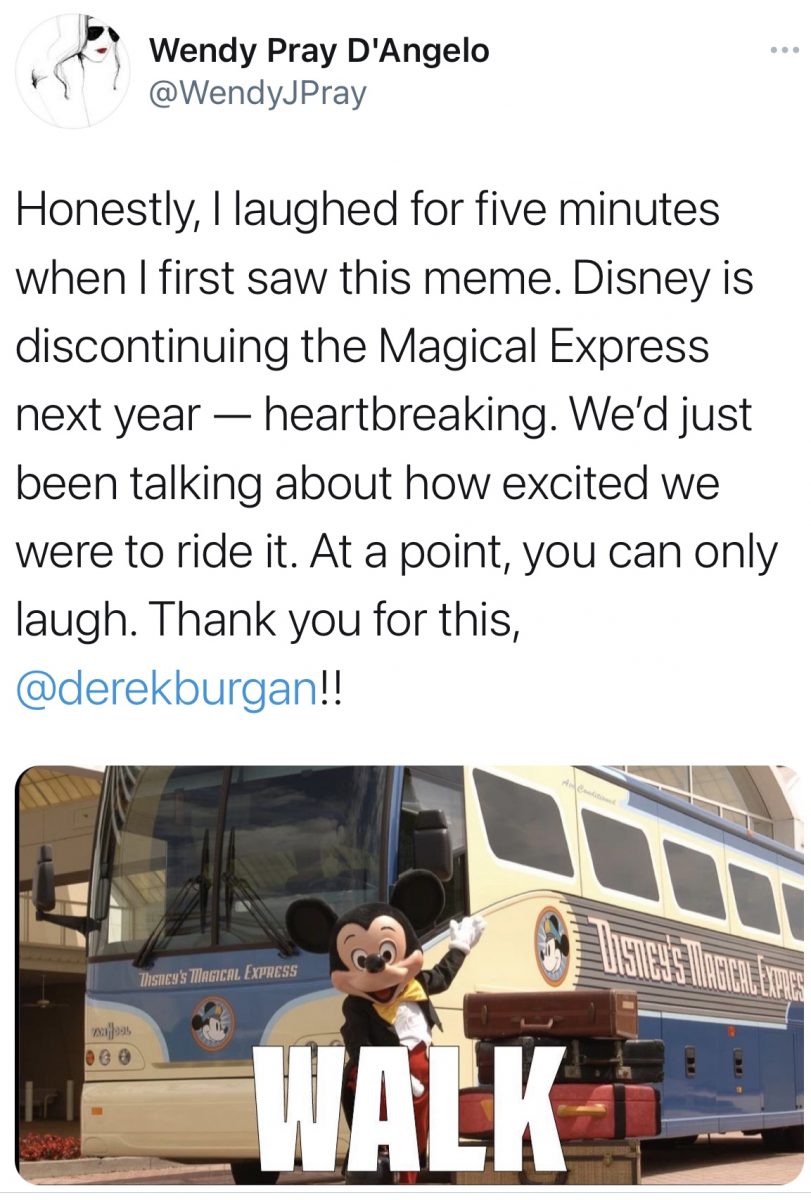 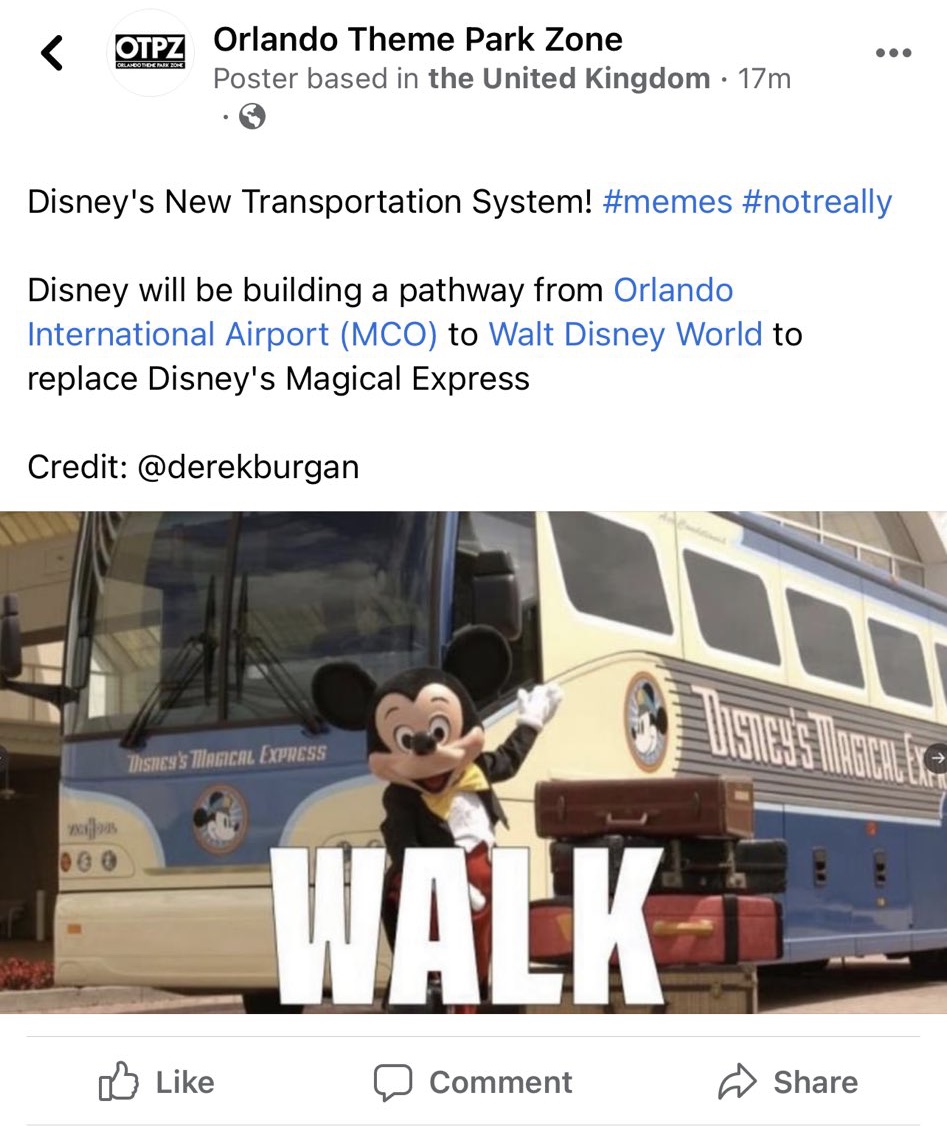 The next part of the story is unfortunately “part of the game” when it comes to creating memes in today’s world. Because most people don’t watermark their work, there are times it can be hard to trace back who was the original creator of the photo. Other times people are much more devious, clearly taking someone else’s popular meme on Twitter and pretending it as their own when reposting on Facebook or Instagram.

Weenie’s WALK meme started appearing everywhere uncredited. Some of us on DisTwitter started to have fun with that fact, adding our watermarks onto the photo to drive @SuperWeenieHtJr even more crazy. 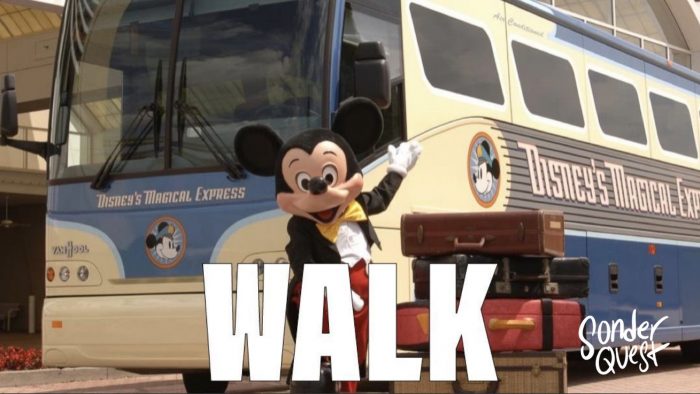 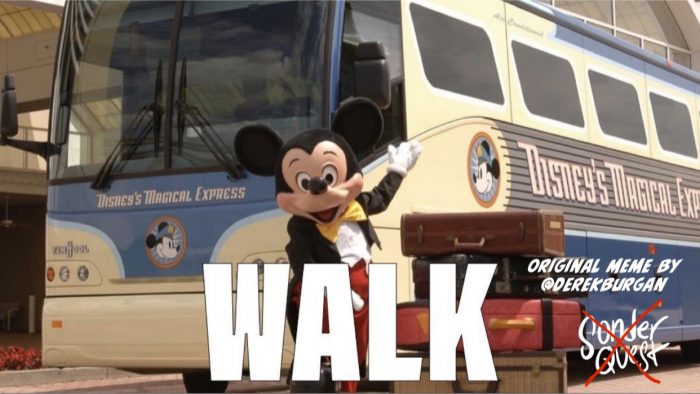 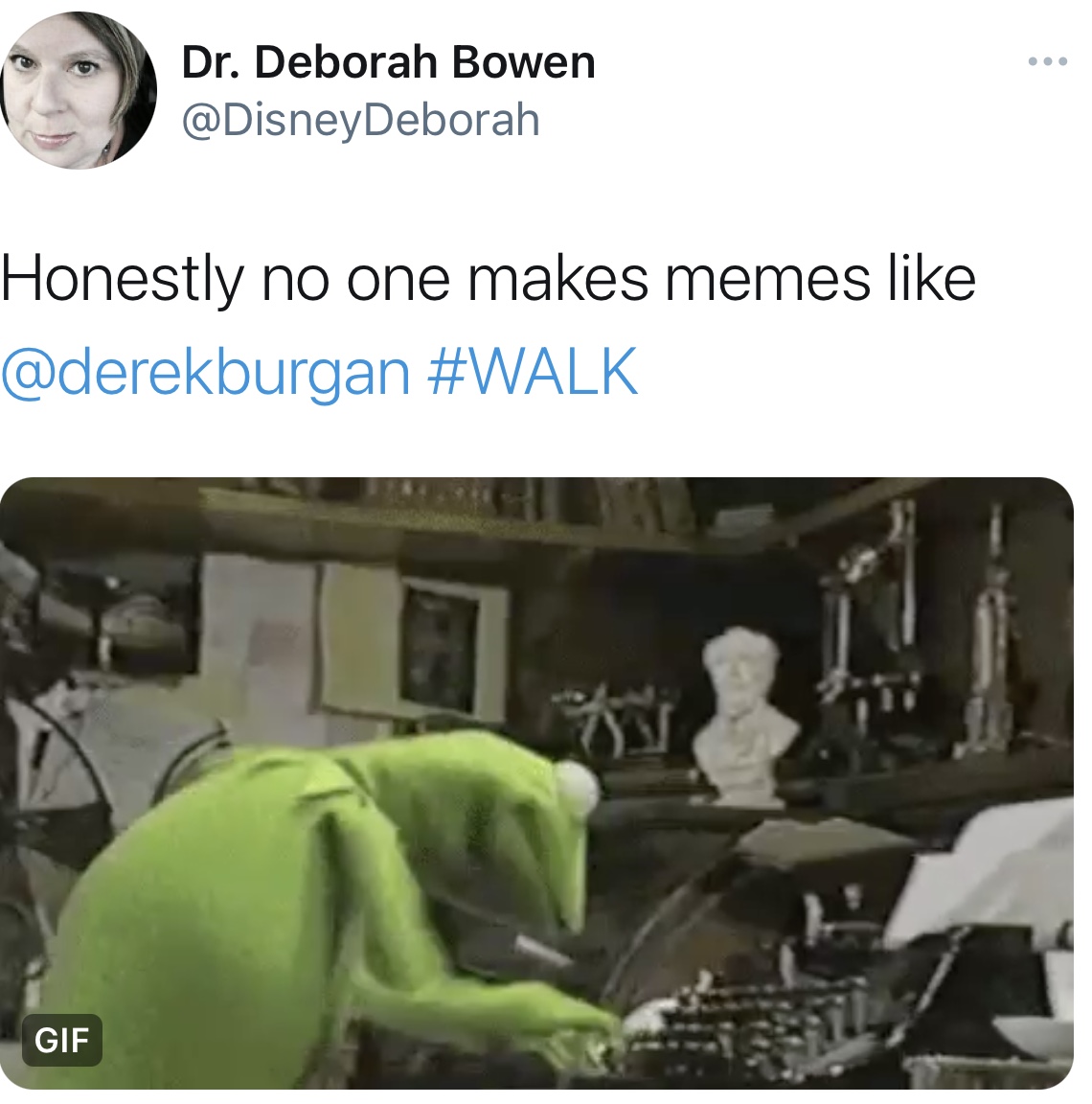 This past week was a pretty major one when it comes to America, and there was no bigger sign that big changes are already here than “The Bernie Meme.” During Joe Biden’s inauguration, what caught many people’s attention was the sight of Senator Bernie Sanders, sitting by himself wearing a thick pair of Vermont-made mittens. 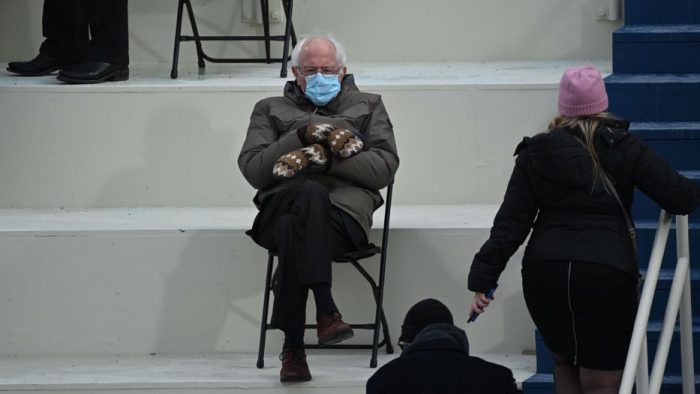 Tons of people immediately shared the above photo, adding a description of their own above it.

“What year is it? Oh, right around the turn of the century. And believe me…”

Going above and beyond are those who made videos. Below is a screenshot of Bernie in a Haunted Mansion Doom Buggy, but you can also watch the animated version. After seeing that, check out this one featuring Bernie in MuppetVision 3-D. AMAZING!

Here’s what is most stunning about the Bernie meme. Normally a meme like this would catch fire and then be immediately forgotten about in a couple hours because some other next-level bonkers event happened in the world that we all had to worry about. The Bernie meme continued into the next day, something pretty much unheard of over the last several years. (I would say “four years” to be precise.) 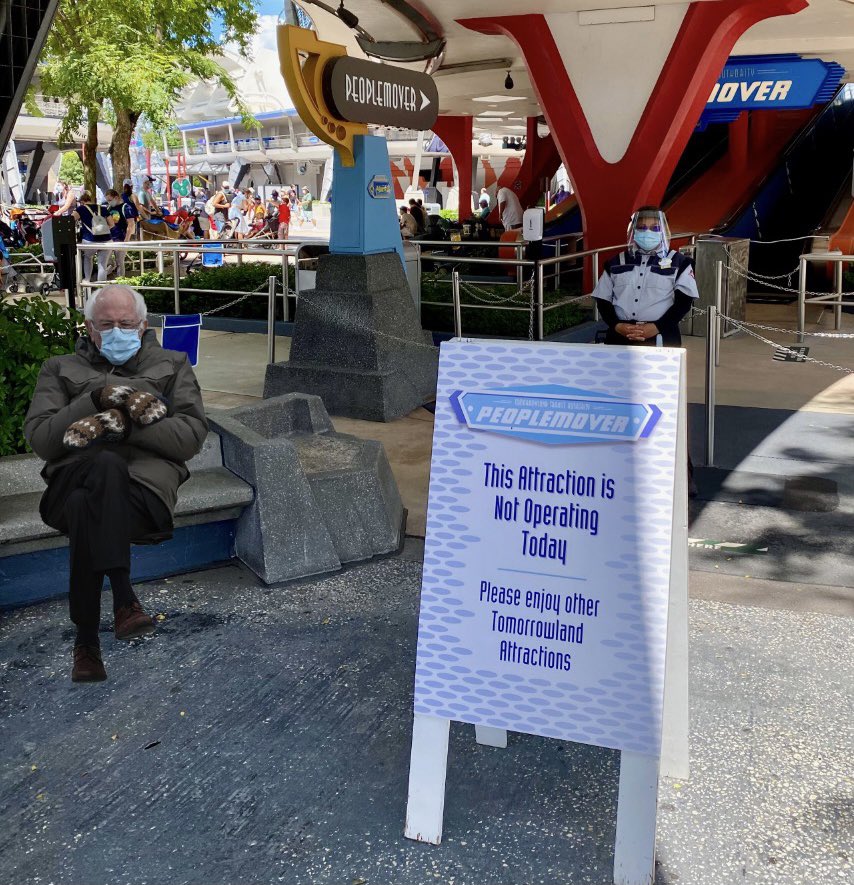 Hey, I know this story… 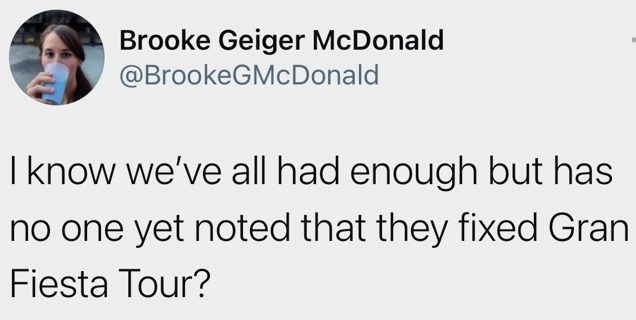 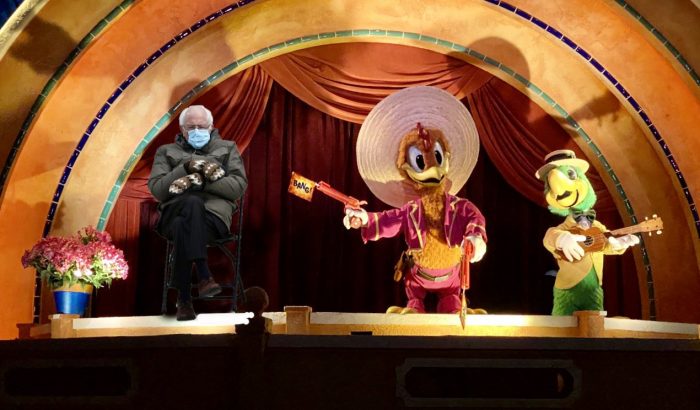 Have to give major props to those who go the extra mile.

Crazier still was that the Bernie meme was shared by a lot of famous athletes, musicians, and movie stars. Currently on Disney+, the show WandaVision is a gigantic hit with fans and critics alike. One of the stars of the show shared a meme using Bernie in a moment from WandaVision episode 2.

Each episode of WandaVision pays tribute to television shows of years past, including homages to the openings of shows like Bewitched. One animated opening to WandaVision had an animated Bernie added to it!

Here we have Bernie patiently waiting for Disneyland to reopen.

You’ve heard the story talked about by Len Testa and Jim Hill on the Disney Dish Podcast, but here is Bernie at the “Save Mr. Toad” sit-in at the Magic Kingdom back in the day.

Of course the Universal fans had fun with Bernie as well, including added him to Hagrid’s Magical Creatures Motorbike Adventure.

HHN Fans had to represent.

Honorable Mention – When Memes Are So Weird They Are Great

Lost amidst this month of gigantic news was Universal putting out a meme so bizarre… so insane… so incredibly weird that it’s actually awesome. 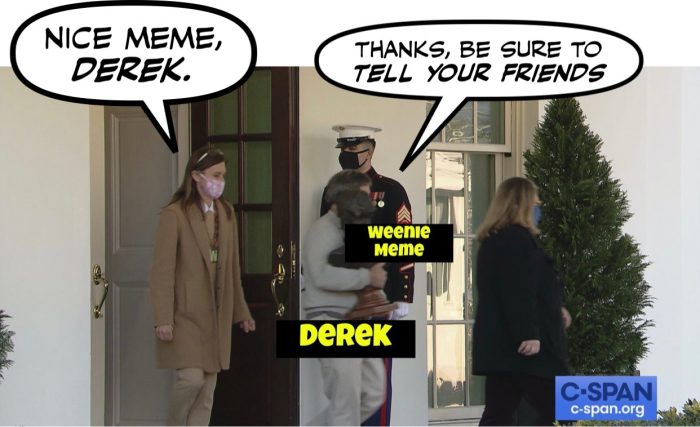