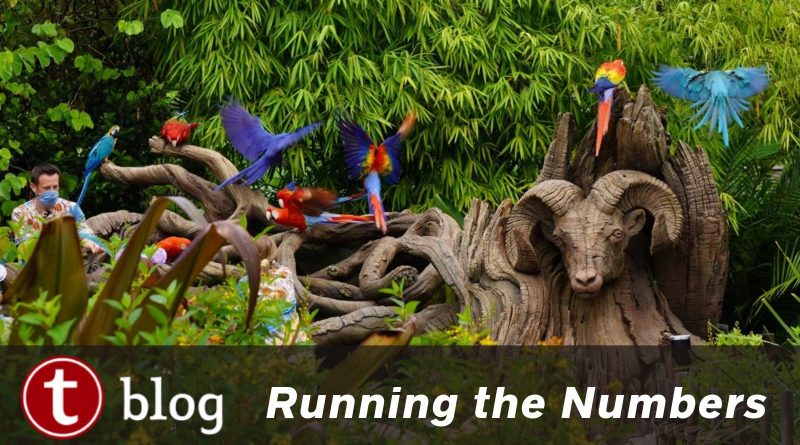 For the past two weeks we’ve been exploring post-visit survey data. Our goal is to see whether the numbers support Bob Chapek’s claim that “guests are even more satisfied than they were prior to the pandemic.” Our first two posts explored dining and resort satisfaction scores. If you’re just catching up, dining satisfaction scores have definitely gone down. But resort scores were more of a mixed bag. This week we’re going to look at our final type of satisfaction scores – attractions!

Similar to resorts, guests can rate each attraction they experience with a score from 1 to 5. But with attractions we get one more layer of detail with our scores because each age group rates the attraction individually. So for each attraction, we can look at Preschool, Grade School, Teen, Young Adult, Over 30, and Senior scores. Since each person visiting WDW experiences many attractions, and because each age group rates individually, we have a lot of attraction scores. In fact, just since reopening we have 78,000 of them. There are so many ways to slice and dice this large set data. It’s a data nerd’s dream!

Keep in mind when we look at that overall number there is a lot going on behind the scenes. Many attractions haven’t reopened, and those that have typically have significantly altered experiences or waits. We don’t collect attraction scores for attractions that aren’t open, so we have no way to capture the dissatisfaction that occurs by something being closed. We’re only measuring how the attractions that guests do experience impact them, positively or negatively.

Let’s do our first slicing by looking at overall satisfaction by those various age groups that I mentioned before.

Attraction satisfaction averaged 4.11 pre-pandemic. Since reopening, that has decreased to 3.99. That’s the biggest drop of any age group! And I am more than 99.99% certain that it’s a significant drop. I have personal experience visiting with kids in this age group both pre-pandemic and post-reopening. There are fewer things that are toddler-friendly open right now. As a result, to fill our days I took them on/to attractions that I probably otherwise wouldn’t have if they could’ve spent time watching parades or meeting characters. So it’s not a big shock that some of the things that I brought them on weren’t generally meant for them. And therefore I perceived their satisfaction to be lower. That could be indicative of a trend among most of the youngest WDW visitors.

Satisfaction scores averaged 4.18 pre-pandemic, and post-reopening have dropped to 4.16. Not a huge shift, but due to the large number of scores and a pretty tight distribution (not much variation), I’m over 97% confident that it’s a significant drop. This is another group that may be suffering due to a lack of options suited to their age.

Pre-pandemic, the average satisfaction score for this group was 4.01. Post-pandemic the average is just 4.00. There’s no significant difference here. Playing into stereotypes, teens are just the least satisfied age group, no matter the circumstances!

Moving on to adults, this crowd averaged 4.09 for satisfaction pre-pandemic. That average has increased to 4.14 post-reopening. I’m over 99.99% confident that that’s a significant increase. Maybe we’re seeing the inverse of what was happening with younger kids. Less opportunities to stumble into an attraction that doesn’t appeal to adults, or maybe greater appreciation for the extra space available on rides, or the shorter waits post-reopening. Lots of possibilities.

This group closely tracks with the Young Adults. As a group, their satisfaction increased from 4.10 pre-pandemic to 4.13 post-reopening. Not as big of an increase, but still very significant.

This group had the second-highest pre-pandemic satisfaction score, at 4.15. Post-reopening, their satisfaction was also 4.15. Ha! Seniors may be taking all of the changes in stride and enjoying their WDW experience just the same.

Here’s where things get interesting! Regardless of age group, are the attractions at certain parks more or less satisfying post-reopening? Let’s dig in.

I also explored only comparing scores of attractions that had re-opened instead of overall park averages, just to make sure that differences weren’t due to attractions staying closed. But the results didn’t change any of the overall results for any park. EPCOT was still statistically the same, Animal Kingdom and Magic Kingdom both decreased, and Hollywood Studios increased.

There are so many attractions that this could easily be a series of 20 blogs. But I’ll narrow things down to just the most significant changes at each park. I won’t list individual confidence intervals here, but in order to appear, a difference had to be statistically significant.

There are definitely some trends we can learn from here. If you’re taking your kids on attractions you wouldn’t have in previous trips, temper your expectations. If you previously enjoyed a walk-on attraction, before you hop in line think about whether you’d still enjoy it as much even if you had a significant wait. Probably you should go see all of the shows with birds because they make people happy.

And if you missed it earlier this week, we took a look at the difference in posted and actual wait times at attractions over the past month. So take a look at that before you decide whether to invest your time in a line.

Have you experienced attractions that you enjoyed more or less post-reopening than you did before the parks closed? Are there other things you’d like to learn from post-visit survey data? Let us know in the comments!

3 thoughts on “By the Numbers: Attraction Satisfaction Pre-Pandemic vs. Post-Reopening”