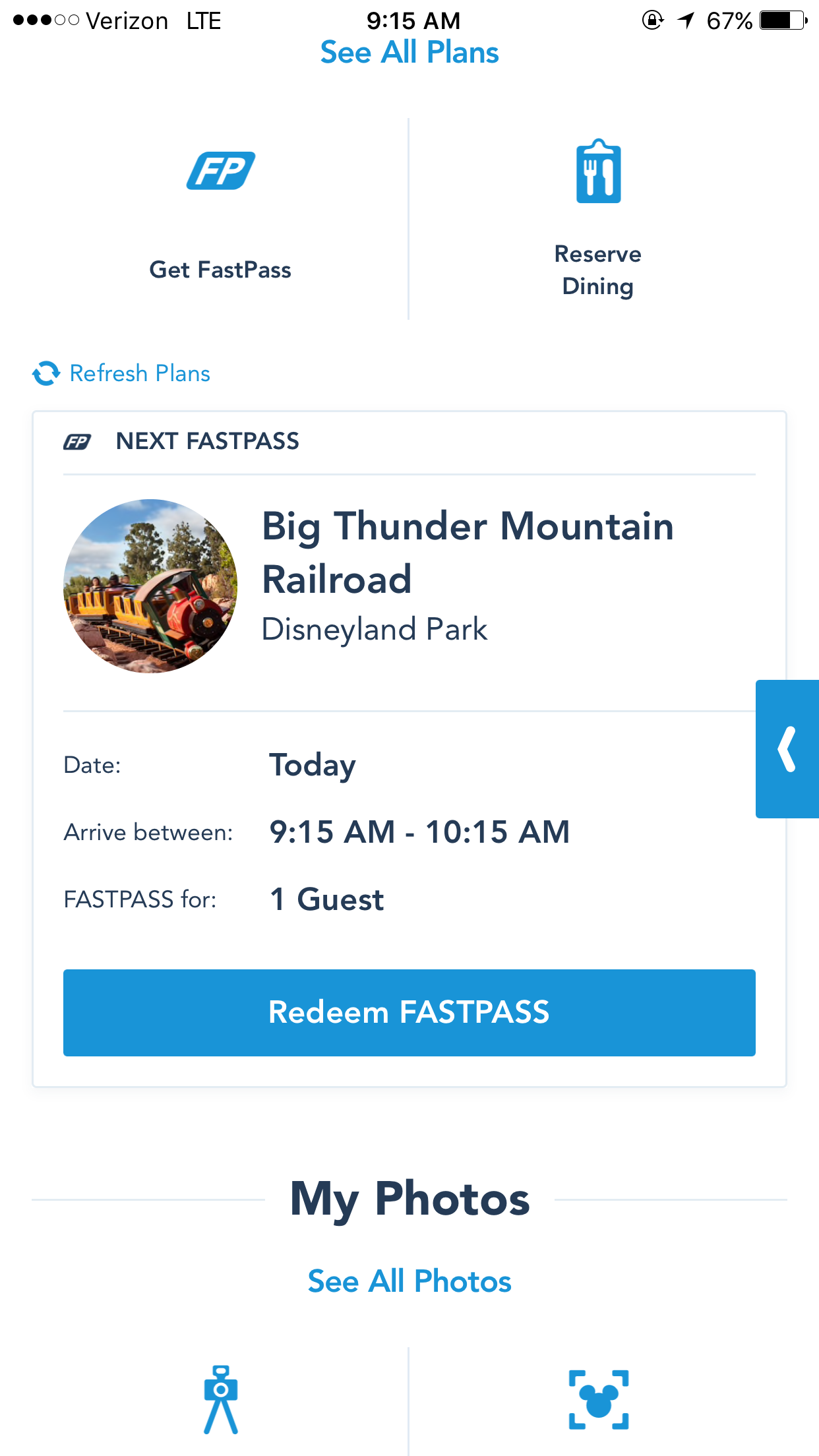 MaxPass is now available at Disneyland Resort. The $10 per-a-person-per-a-day add-on grants the user the ability to make FastPass reservations on their phone, as well as access to PhotoPass downloads taken by Disney photographers or on select rides. Is it worth it? How does it work? Take a look at our review of Disneyland’s MaxPass to find out. When you open up Disneyland’s official app you will see an option labeled “Get FastPass.” If you do not see this option then there’s a chance your app is out of date. It’s a good idea to update the app before you leave home, just in case cellphone coverage isn’t great when you get to the parks. Also remember to have your Disney account created and your ticket or annual passport linked in the app. Before moving on, all regular FastPass rules apply to the new MaxPass system. See our Disneyland Resort FastPass page for more information. After selecting “Get FastPass” you’ll be brought to this screen where you create your party.  Remember that MaxPass is an add-on with a current cost of $10 per a day. Each member of your party needs to purchase the MaxPass add-on in order for you to make FastPass reservations for them. If you have 2 or more people in your party, one person can not purchase MaxPass and then make reservations for everyone. An important tidbit, with MaxPass you are only able to make a FastPass reservation AFTER you tickets have been scanned and you enter the park. This is the screen you see if you have not yet entered the park for the day. Once you have entered Disneyland or DCA, and you attempt to reserve a FastPass, you will see this screen. You can select either park and make FastPasses. It does not matter if you’re in DCA and want to make a Disneyland FastPass, or visa-verse. The Disneyland app will then show you a list of attractions and their current FastPass return times. Simply scroll through the list and select an attraction you’d like to reserve a time for. A nice feature I want to point out on this screen is that you can also see the current standby wait time. That lets you know if it’s even worth picking up a FastPass for. Since Guardians of the Galaxy – Mission: BREAKOUT! is the current hot ticket, I decided that would be my first MaxPass FastPass reservation. The scheduled opening time for DCA was 8:00 AM, I entered the park at 7:53 AM, and immediately made a reservation for the next available return time (which at this point was 9:05 AM, due to FastPass being available during Magic Morning). The process was very easy. What happens when you try to book another FastPass reservation when you already have one made? This screen seen above. All normal FastPass rules apply to MaxPass. My Guardians of the Galaxy return time was 9:05 AM, therefor the next time I could make a FastPass was 9:05 AM. After making a FastPass reservation in your Disneyland app, you can easily see the reservation on the main menu. It’s nice that they made it visible without having to click through to any sub-menus. You can also click on the reservation for more options. Here you can see I clicked on my GotG FastPass and now have the option to cancel, find it on the map, read more information about the ride, and many other bits of info. Moving on, a little later my Big Thunder Mountain Railroad return window opened. I was now presented with an option labeled “Redeem FASTPASS.” After you select “Redeem FASTPASS” you are presented with your actual FastPass ticket. You can take this to the FastPass line at the ride, scan the barcode, and be on your way. You are then free to make another FastPass reservation. Before I wrap this up I wanted to test a couple of things. What would happen if I used my annual pass, and received a paper FastPass from a ride’s FastPass distribution area? The answer is it almost instantly shows up in the Disneyland app. Here you can see the paper FastPass I received, and the same reservation showing up in my account. What would happen if I tried to get a paper FastPass while I already had a reservation for another ride made in the Disneyland app? This. Obviously this wouldn’t work but I had to test it out anyway.

So what’s the difference between MaxPass and regular “legacy” FastPass? Turns out not very much, besides the obvious advantage of being able to book and redeem FastPass reservations on your phone. Is that worth $10? You and your party need to decide if the luxury of not running back and fourth across the park to obtain paper FastPass tickets is worth the premium price. I should point out that regular paper FastPasses are still available to all park guests, so really no one is losing anything here. Also, the system seems easy to use for frequent visitors, but I’m curious if it’ll be confusing for other guests who don’t visit all the time or know the rules of FastPass. However, some people would argue that unlimited PhotoPass downloads are worth the $10 price alone. A big negative to some people will be that you can’t reserve FastPasses for shows, such as World of Color and Fantasmic. You’ll still need to obtain a paper FastPass ticket from either show’s distribution areas.

That’s it for this review. Let us know what you think about MaxPass. We’ll also answer any questions in the comments below and update this post with a FAQ after we receive a few.

Q: With MaxPass, can I make a FastPass reservation in advance like with Disney World’s FastPass+?

A: No. Disneyland Resort’s FastPass reservations still need to be made the day of.

Q: Can I make a FastPass reservation if I’m outside of Disneyland or DCA? For example, if I leave the parks and go back to my hotel for a mid-day nap.

Q: Can I make more than one FastPass reservation with MaxPass?

Q: Can you make World of Color or Fantasmic! FastPass reservations with MaxPass?

No. A big negative to some people will be that you can’t reserve FastPasses for shows, such as World of Color and Fantasmic. You’ll still need to obtain a paper FastPass ticket from either show’s distribution areas.