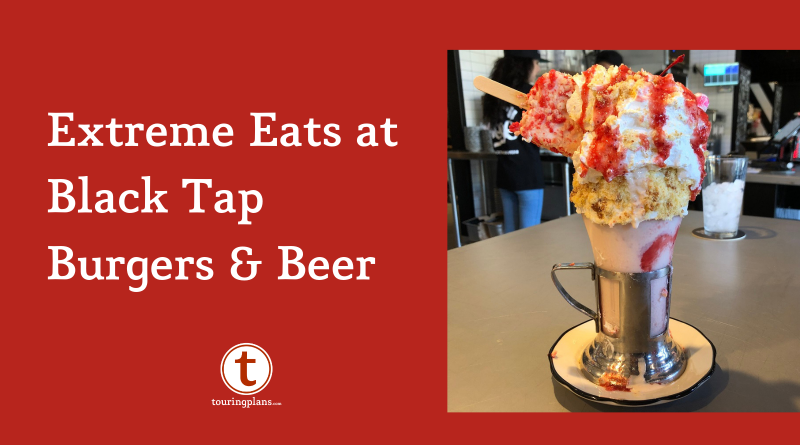 Out in California, Black Tap Craft Burgers & Beer is Downtown Disney’s newest eatery. In this review we’ll go over some of the menu offerings and take a look at their signature items, the massive Crazy Shake Milkshakes. 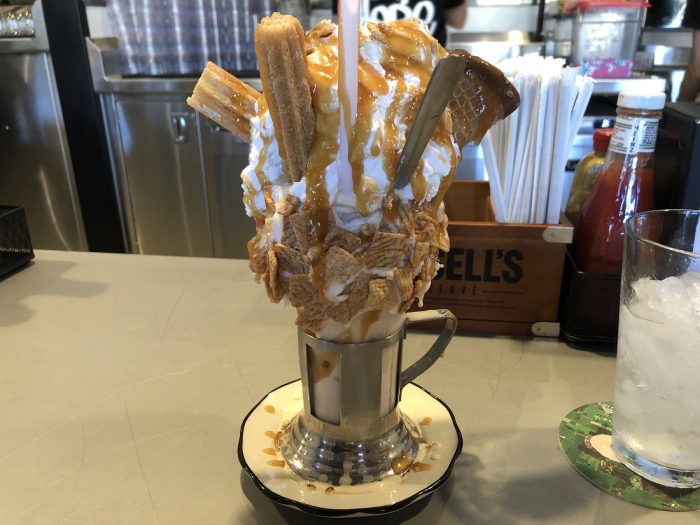 Let’s jump right into the Crazy Shakes. Before I tried one of them, everything about the Crazy Shakes made me suspicious. Many restaurants (including Disney’s own Beaches & Cream in Walt Disney World) have jumped on the outrageous-looking/Instagram-worthy milkshake bandwagon. In my experience, these kinds of shakes are often all style and no substance. I’m happy to report that Black Tap has done it right. Their Crazy Shakes are genuinely delicious and inventive, in addition to being photogenic. 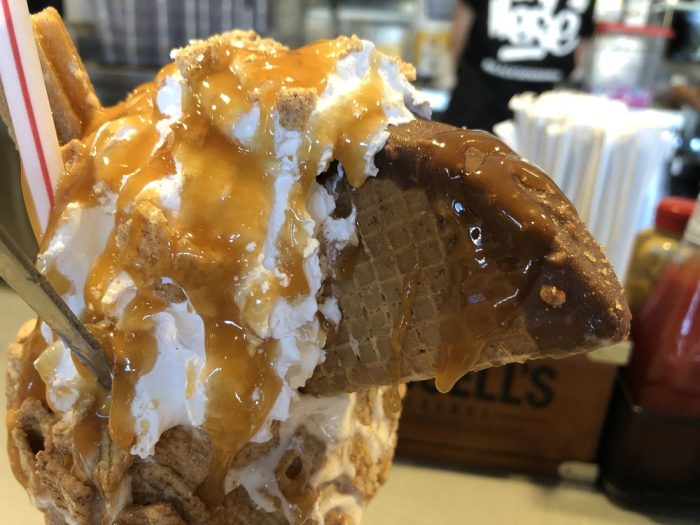 My favorite of the bunch is the Churro Choco Taco Shake. This shake includes a Cinnamon Toast Crunch ice cream shake base, topped with whipped cream, caramel, Cinnamon Toast Crunch pieces of cereal on the outside, as well as two churros and a full on Choco Taco shoved in to the top. Wow. Any of these items on their own may not sound too exciting, but with everything blended together it was simply a fantastic dessert. As I ate I scooped up a few pieces Cinnamon Toast Crunch from the side of the glass before filling the spoon with the base shake, then on the next bite I would dunk the churro in the ice cream, caramel, and whipped cream, and then take a bite of the Choco Taco. The Churro Choco Taco Crazy Shake is easily one of the best shakes I’ve ever had. 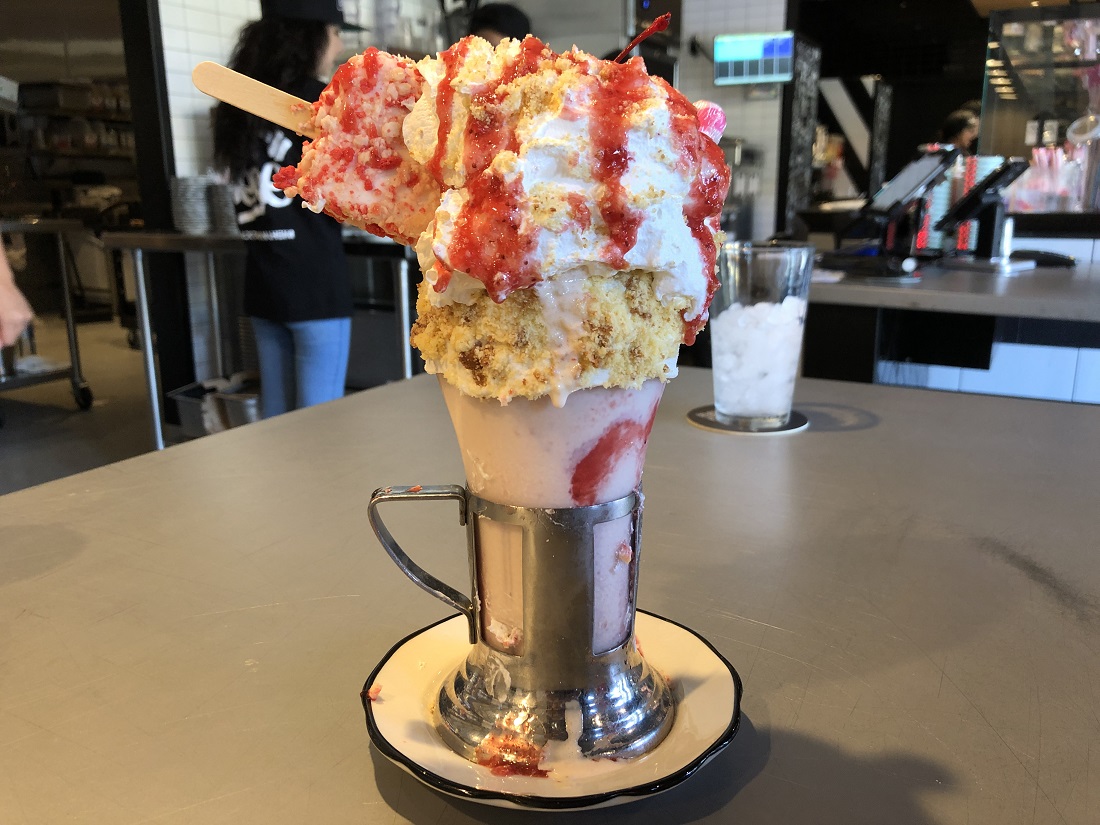 Next up, my group tried the Strawberry Shortcake Shake. This one is made of Strawberry Shake with a Vanilla Frosted Rim and Crumbled Cake outside of the glass, and is topped with a Strawberry Shortcake Ice Cream Bar, Pink and White Twisty Pop, Whipped Cream, Strawberry Drizzle, Crumbled Cake, and a Cherry. I’m a big fan of strawberries so this was one of the shakes I was looking forward to trying the most. It did not disappoint as I found every bite filled with delicious strawberry flavor. Also. the crumbled cake on the top and sides added a very satisfying texture. 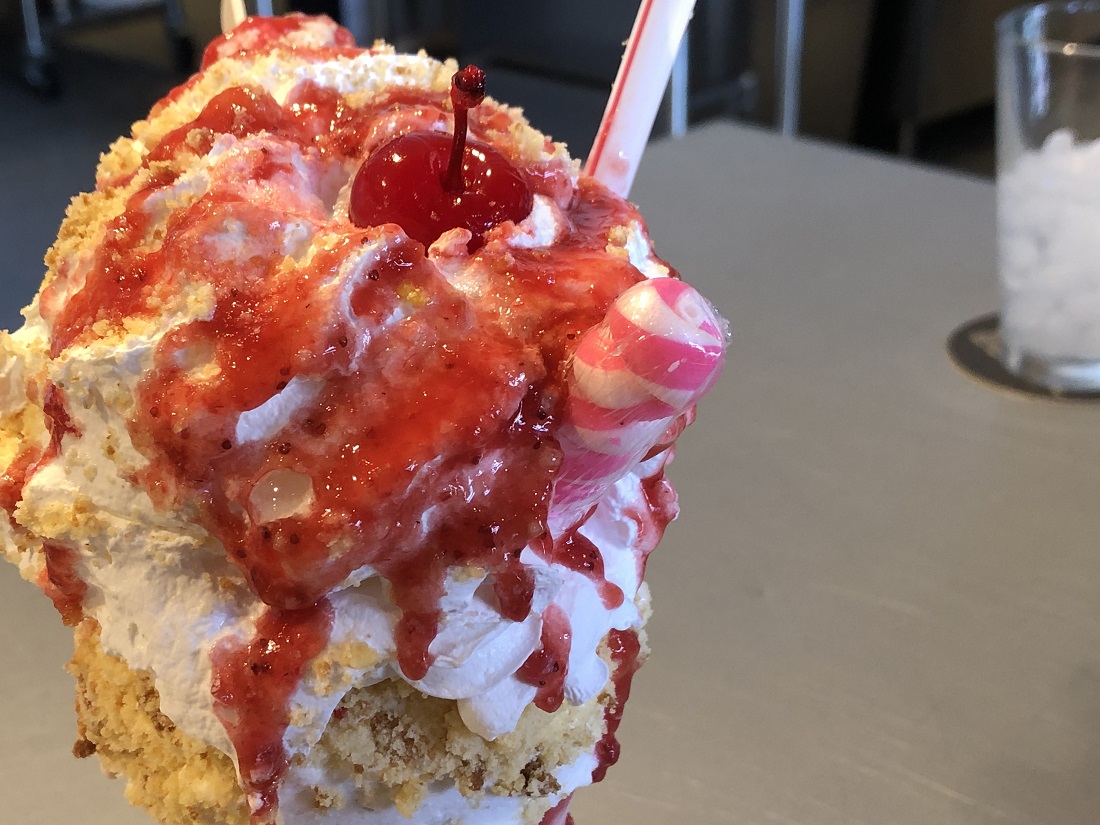 It’s a bit odd that the White Twisty Pop is still wrapped in plastic, even though it’s inserted almost all the way in to the shake. I ended up setting it aside and forgetting about it. Besides the Twisty Pop, the Strawberry Shortcake Shake was a real winner. 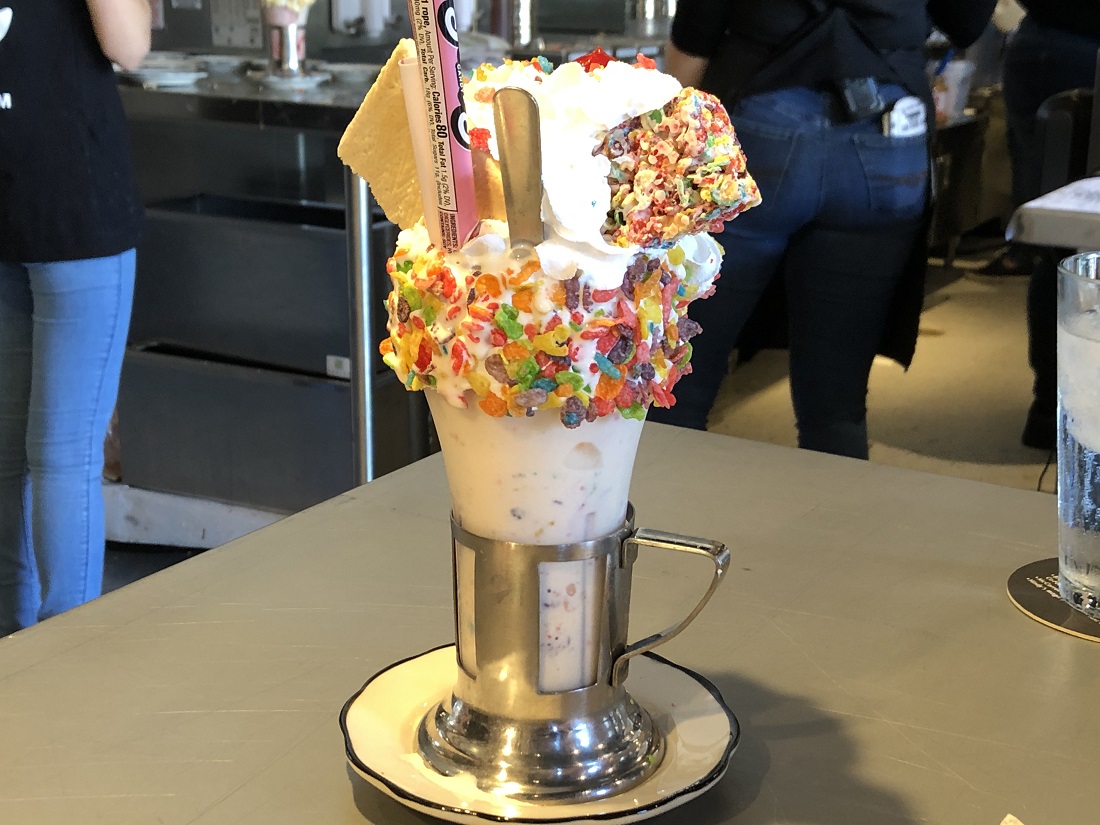 The Bam Bam Shake includes a Fruity Pebbles Shake base, a Vanilla Frosted Rim with Fruity Pebbles, and is topped with a Fruity Pebbles Rice Krispy Treat, half of a Strawberry Pop-Tart, Laffy Taffy, Whipped Cream, and a Cherry. I enjoyed mixing up everything and taking spoonfuls of the intensely fruity and sweet mess. This was a good shake, but not as good as the previous two. Also, this may sound crazy, but I swear the Bam Bam Shake was so sweet and sugary that it made my teeth feel like they were rotting. 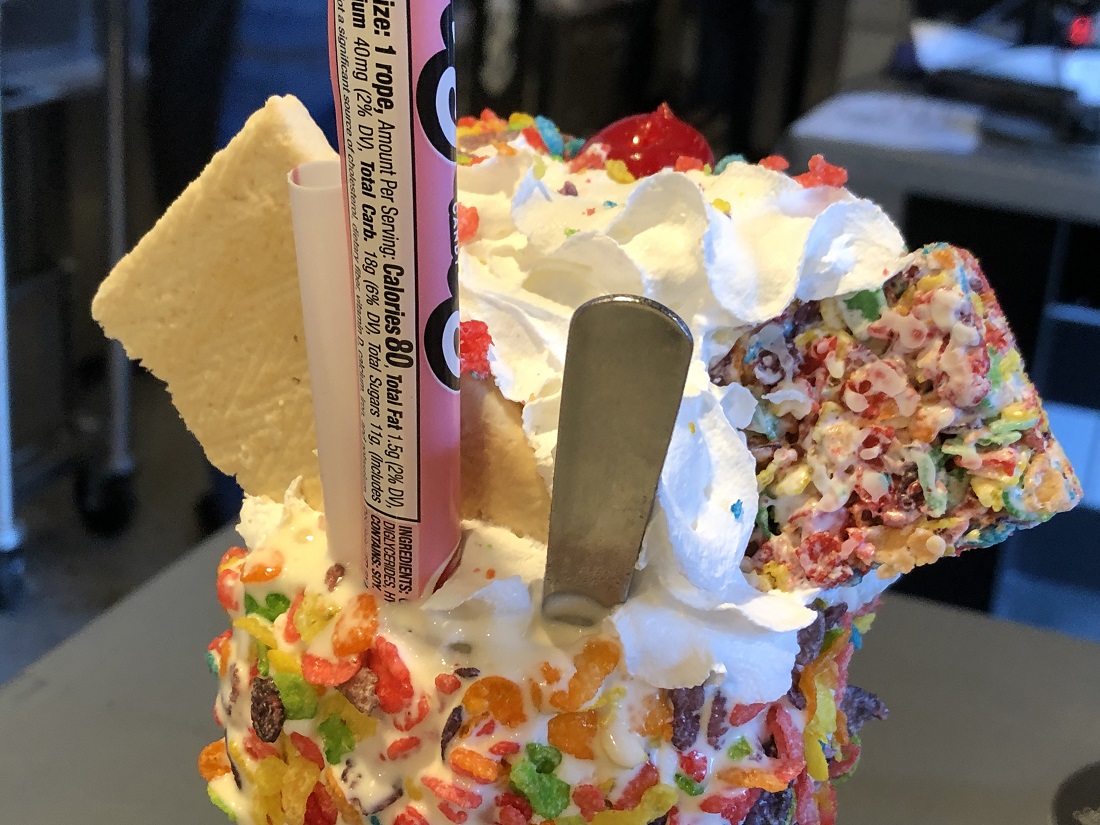 Like the Strawberry Shortcake Shake mentioned before, the Bam Bam Shake also has a full wrapped candy inserted in to it. This time it was a long piece of Laffy Taffy. This time I did fish it out and opened it, just so I could try bites of it with the rest of the shake, which ended up being surprisingly good. 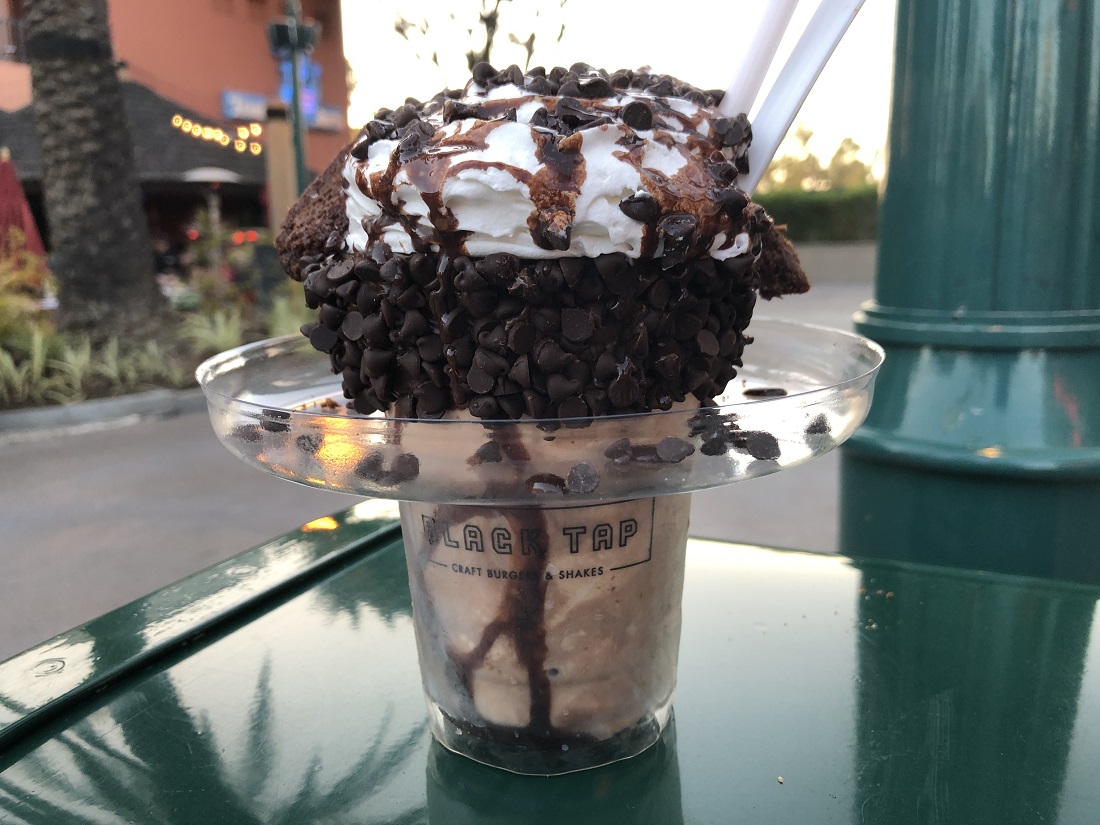 Now’s a good time to mention Black Tap’s to go window. This is located on the outside of the restaurant, and the only items sold are shakes. This saves you from waiting in the long line. We regularly see people waiting over 30 minutes to order and get a seat inside. The shakes served here are the same as the shakes sold inside, but here they come in a plastic cup with a built in bowl to catch any toppings that may fall off. The shake in the picture above is the Brooklyn Blackout (Chocolate Shake with a Chocolate Frosted Rim with Mini Chocolate Chips topped with two Chocolate Brownies, Whipped Cream, and Chocolate Drizzle). Obviously, this will the one chocolate lovers will want to get. The brownies on top were so moist and yummy that I still crave them.

As you can see, there’s a lot of good things about Black Tap’s Crazy Shakes. The down side is, of course, the price. Each shake costs $15 to $17 (or $9 if you get a normal shake with nothing on top of it). That is a lot of money and I’m pretty sure that counts as the most expensive dessert in Disneyland Resort. On the plus side the Crazy Shakes are easily shareable, which you should absolutely do. I ate at Black Tap with two friends, we each got a shake and an entree, and by the time we were done we were practically comatose. We were so full that afterwards we walked a lap around DCA, but each step was a struggle. Almost as if we were walking through sand. But damn was it worth it. 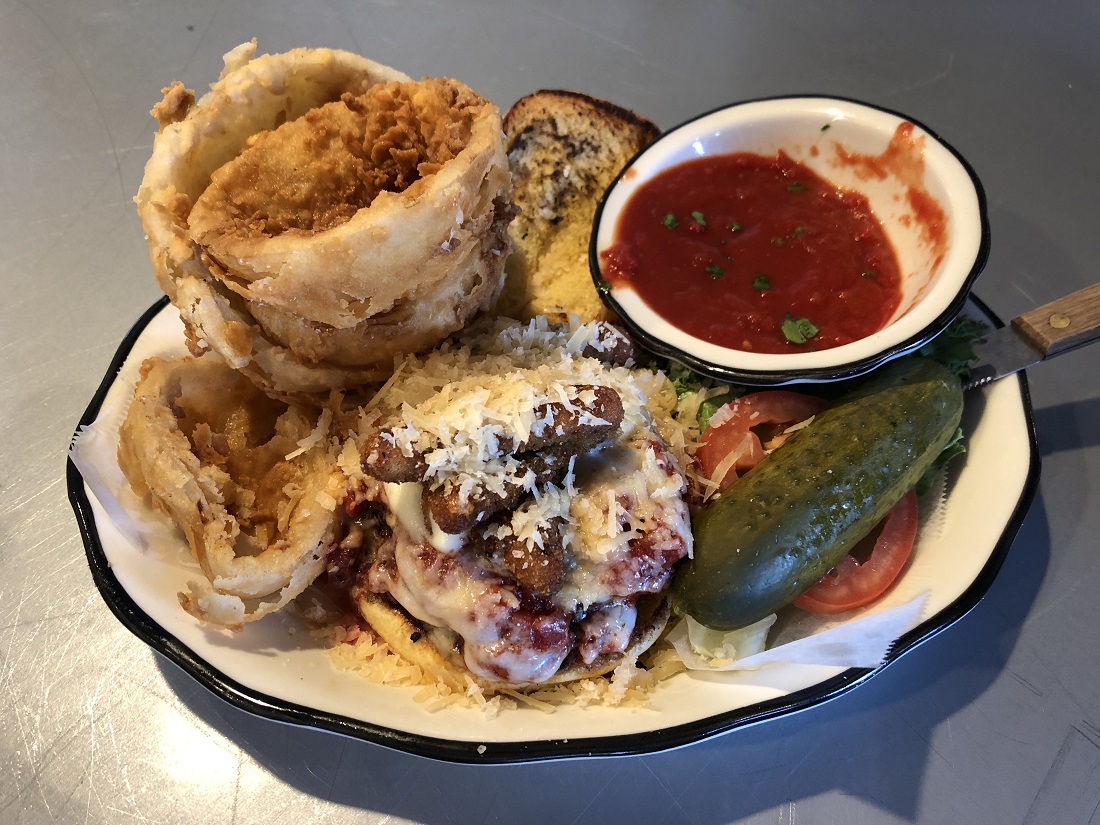 My group tried three of Black Tap’s burger entrees, beginning with The Pizza Burger. What a glorious mess this was. The burger is made up of a Prime Burger patty, Marinara Sauce, Fried Mozzarella, and Shaved Parmesan, served on a Potato Roll with Lettuce, Tomato, a Pickle, and French Fries. First off, I was obsessed with the Fried Mozzarella sticks that topped this burger. By the way, a serving of the Mozzarella Sticks is on the appetizer menu and I will definitely be ordering those next time, because the sticks included on the burger were delectable. If you get one burger at Black Tap, this should be the one. Also seen in this picture are the onion rings (which can be added to any entree for $2 extra). I’m usually not too big of a fan of onion rings but these were tasty and well seasoned. 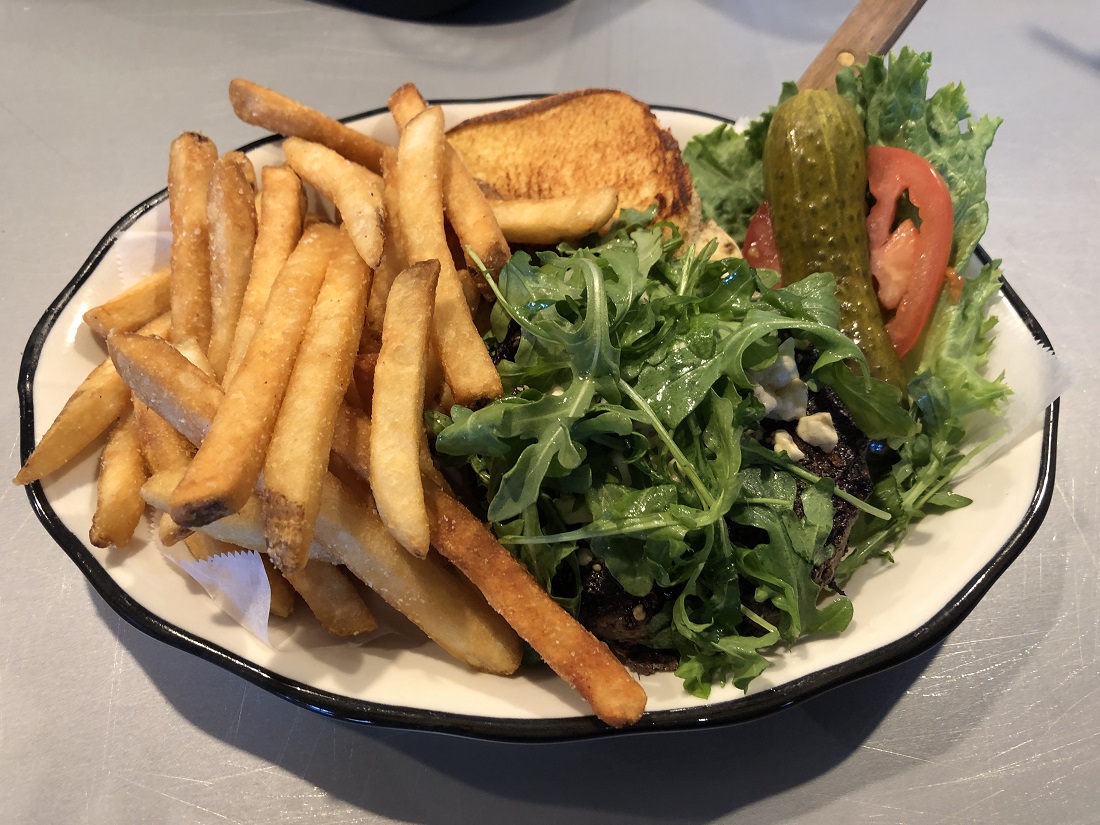 Next up we tried the The Greg Norman (1/2 lb Wagyu Beef Burger, House Buttermilk-Dill, Blue Cheese, and Arugula served on a Potato Roll with Lettuce, Tomato, a Pickle, and French Fries), which was also very good. The patty had a satisfying smokey/charbroiled taste to it, was perfectly cooked, and the included Arugula Blue Cheese perfectly complimented the meat. I could see an argument being made for the fries (which are included with all the burger entrees) being the best in Disneyland Resort. They’re wonderful. 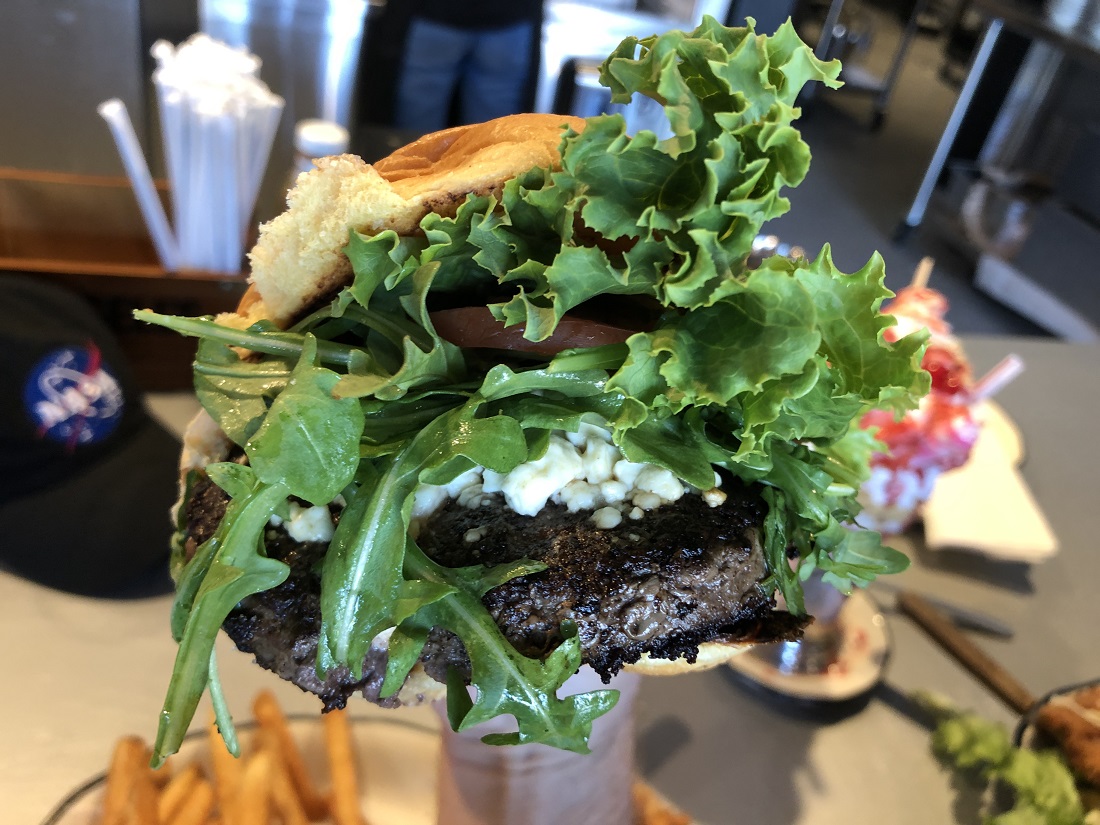 The Greg Norman is decent in size and tasty, but it’s also the most expensive burger on the menu at $20 (the rest are $15 to $19). Overall, Black Tap is not cheap. But thankfully you are getting shakes, burgers, and sides that are delicious and made with good quality ingredients. I think most people could share a single burger, shake, and maybe a side and leave being satisfied. If that’s the case the cost would be in line with most quick service restaurants in the parks.

Black Tap also offers a selection of appetizers, including Deep Fried Brussels Spouts, BBQ Wings, Fried Pickles, and more. For those looking for adult beverage, 10 kinds of craft beer are on tap (Dogfish Head IPA, Brooklyn Lager, and Stone Scorpion IPA to name a few), as well as bottles of beer and cocktails (Old Fashioned, Gin and Tonic, Black Tap Mule, and others). Overall Black Tap is a great dining option in Downtown Disney. We enjoyed Black Tap’s food much more than the recently opened Ballast Point, which has a similar menu.