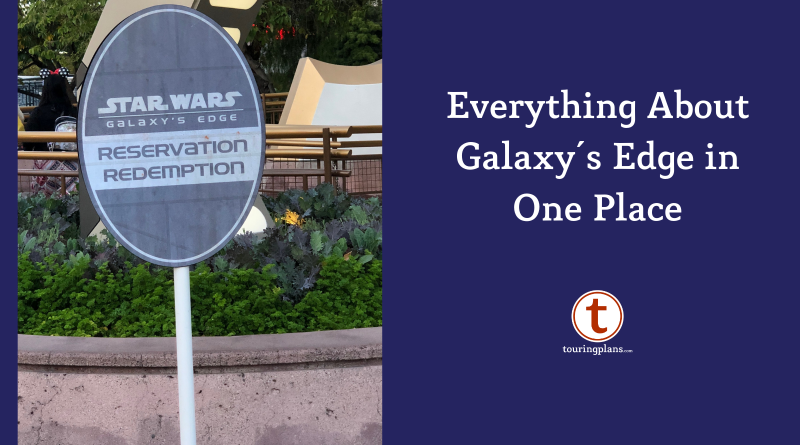 The time has finally come. Star Wars: Galaxy’s Edge, the immersive Star Wars land, is opening at Disneyland on May 31, 2019. TOMORROW! (East coast folks will have to wait until August 29 for Galaxy’s Edge to open at Walt Disney World.)

TouringPlans has a big team at Disneyland right now, ready to cover every aspect of the opening. In preparation for the news to come, let’s look back at everything we know so far. For each area, here’s a brief summary and links to our previous in-depth coverage.

The creation of a “Star Wars Land” was first announced by Disney CEO Bog Iger at the D23 Convention in August 2015. Here we got our very first look at concept art and the news that there would be a Star Wars Land at both Disneyland and at Disney’s Hollywood Studios at Walt Disney World. In February 2016, we saw more substantial concept art and learned that there would be two attractions, a restaurant, and a cantina. Not until July 2017, did we learned the official name of the new land – Star Wars: Galaxy’s Edge.

After the initial announcement about Star Wars Land, we began to get real solid information about names and dates. Batuu. Galaxy’s Edge. Summer 2019. News!

Space travelers gotta eat (and drink), and Galaxy’s Edge has that covered. There will be snacks and real meals, kid foods and adult drinks, and it’s all impeccably themed to Star Wars. We can’t wait!

Exit through the gift shop! Plush items, clothing, throwaway gifts, and multi-thousand-dollar collectors’ items, Galaxy’s Edge will have it all.

One of the hottest areas of speculation has been about crowd control issues related to what is sure to be the Disney theme parks’ largest draws ever. Disney is instituting different rules for crowds at Disneyland and Walt Disney World.

We Had Fun Getting Ready

To get in the Galaxy’s Edge spirit, Brian and Angela did a full rewatch of all the Star Wars movies and discussed the films with viewers on our YouTube channel.

Are you as excited as we are for Galaxy’s Edge? Do you have specific questions you want our team to research when they’re at the opening this weekend? Do you have a trip planned? Or are you planning to avoid the whole thing? Let us know in the comments.

Save time! Save money! Have fun! For complete access to all of our great vacation-planning tools like the Crowd Calendar, customizable Touring Plans, Cheapest Ticket Calculator, Dining Reservation Finder, Hotel Room Request automator, and MORE, subscribe to TouringPlans.com.