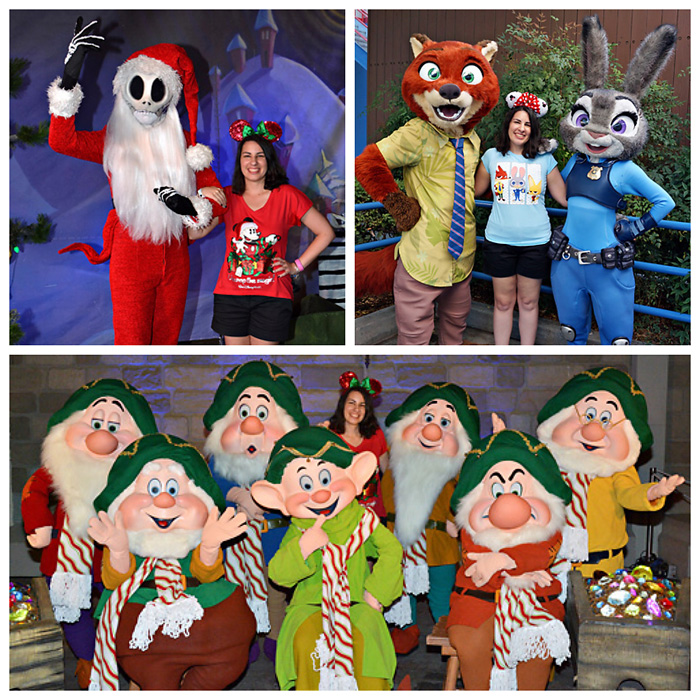 The holidays are a great time to see characters in fun holiday outfits at Walt Disney World, as well as see some special characters that only show up for the holidays. Some characters are only at Mickey’s Very Merry Christmas Party, while others you can find in the parks throughout the day. Let’s take a look at who you’ll find at this most magical time of the year. Most characters are out from November 11 to the first week of January, unless noted.

First, let’s look at the characters you’ll find this year at the party. Since this is a hard ticket event, there is an extra cost, but you’ll find characters here that you won’t find anywhere else at Walt Disney World. If you want to meet popular characters like Sandy Claws Jack, Nick & Judy, or the seven dwarfs, I recommend getting in line before the party starts. The party this year is the first time Nick & Judy will be meeting at Walt Disney World for park guests, so their line is sure to be popular. These 3 sets of characters all start meeting before the party even starts because their lines will grow so quickly. You do not want to waste the whole night in a line, so be sure to get there early!

Now let’s take a look at characters you can find in the parks, without having to pay extra for a hard ticket event.

Disney’s Animal Kingdom is the park with the most characters dressed for the holidays, so it’s a must stop for character fans. Mickey & Minnie, Donald, Chip & Dale, Goofy & Pluto, Baloo & King Louie and Pocahontas all have special outfits for the holidays. For the first time this year, Santa will be meeting at Disney’s Hollywood Studios, at the Once Upon a Toy store. From December 25 to December 31, Santa Goofy will meet instead. Also new this year, Chip & Dale are in the holiday spirit, wearing cute hats and scarfs.

From November 7 to January 6, there is a holiday themed character dinner at Hollywood & Vine. Here, you will find Minnie, Mickey, Donald, and Daisy in holiday outfits you won’t find elsewhere, along with Santa Goofy. I attended last year, and it was one of the best character meals I’ve attended. The character interaction is fantastic, and the outfits are adorable.

The usual Disney characters don’t have any special outfits at Epcot. However, you can find some special meet & greets during Holidays Around the World from November 27 to December 30.

Most countries in the World Showcase have a storyteller, who talk about their country’s holiday traditions. At the end of their talk, each storyteller will pose for pictures. Julenissen and Sigrid are in Norway. You can get a picture with a Chinese Lion after the dance in China. The most fun picture opportunity is in Germany. Helga is a great storyteller, but towards the end of the show, a life sized nutcracker shows up, so you will get a picture with both of them. La Befana is found in Italy.

Santa & Mrs. Claus meet at the American Adventure. You can also meet both Hanukkah and Kwanzaa storytellers here. Voices of Liberty wear Victorian Christmas era costumes, and you can usually get a picture with one of the singers after the show.

In Japan, you’ll see O-Shogatsu. Morocco’s most recent storyteller doesn’t seem to have a name, and I’ve noticed they sometimes leave immediately after the show, so I haven’t been able to get a picture with this storyteller over the years. The two storytellers most resembling Santa Claus are Pere Noel in France and Father Christmas in United Kingdom.

Canada and Mexico do not have storytellers, but instead have musicians. Fiesta de Navidad, in Mexico, is a mariachi band and dancers, and if you ask after their performance, you may be able to get a picture. Canadian Holiday Voyageurs tells the story through music in Canada.

Outside of the party, the only holiday character you’ll find at Magic Kingdom during regular park hours is Santa, in Town Square, next to City Hall.

Santa meets near Ghirardelli Ice Cream and Chocolate Shop until December 24. After this, Santa Goofy takes his place until December 31. New this year are toy soldier and snowflake stilt walkers from 6:00 PM to 10:00 PM, which are sure to be fun to take pictures with.

Many Disney resorts will have characters in holiday outfits the week leading up to Christmas. This started off as just deluxe resorts, but over the years, more resorts have been added. If you are at Walt Disney World this week, be sure to check the entertainment schedule for the resorts. The schedule usually will have character meet & greet on their schedule, but won’t say what character will be meeting. From my experience meeting characters at resorts on other holidays, Cast Members at the resort usually won’t know who will be meeting. Characters can change over the years, but one that tends to stay the same over the years is that Mickey and Minnie usually meet in Victorian Christmas outfits at Grand Floridian Resort. Santa meets at every resort on Christmas Eve.

Mrs. Claus and Santa meet in a tiki hut at Swan and Dolphin Resort in their vacation outfits on select dates during late November and December, mostly weekends. They only meet from 6:15 PM to 8:00 PM, so don’t miss it. Unfortunately, I don’t have any pictures since the last few years I’ve visited earlier in November, before they started meeting. You can see some hilarious pictures in their vacation outfits on the Swan and Dolphin site.