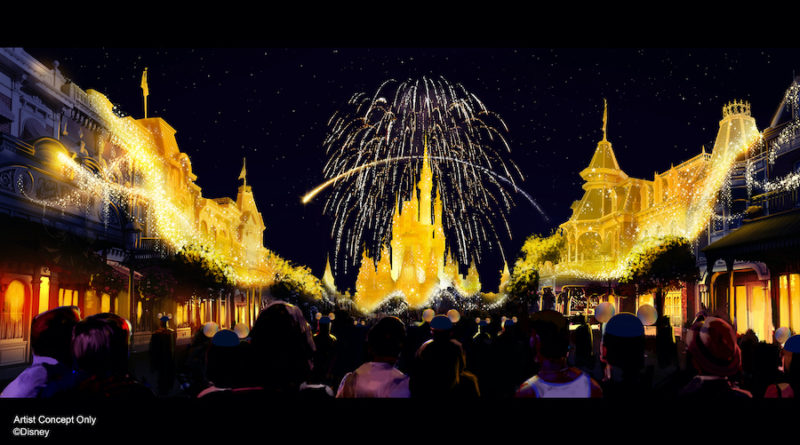 So, what can we look forward to? Well, not one, but two new nighttime shows.

Today, it was announced that the Magic Kingdom would be offering a brand new nighttime show called “Disney Enchantment.” This show will debut on October 1 and will take Guests on a journey filled with adventure, wonder and empowerment. The show’s message has a goal of inspiring everyone to believe in magic. “Disney Enchantment” will feature music, enhanced lighting, stunning fireworks and, for the first time, immersive projection effects that extend from Cinderella Castle down Main Street, U.S.A.

In addition, Disney has made it official. Harmonious will debut for the 50th anniversary at EPCOT. Harmonious is one of the largest nighttime spectaculars ever created for a Disney park. (And if you’ve seen it under construction, you would have to agree! This show is going to be gargantuan!) Harmonious will take place in the World Showcase Lagoon and is a celebration of Disney music that inspires people worldwide. It’s a grand tribute to the stories and songs that unite us. The show will embrace new technical feats that incorporates pyrotechnics, choreographed moving fountains, lighting and media in new ways. “Harmonious” will include new interpretations of classic Disney songs as you’ve never heard them before, reimagined in more than a dozen languages by a diverse group of 240 artists from around the world.

Moving to Disney’s Animal Kingdom, a new daytime experience has been announced! “Disney KiteTails,” will come alive several times daily at the Discovery River Amphitheater beginning October 1. Performers will fly windcatchers and kites of all shapes and sizes, while out on the water elaborate three-dimensional kites, some stretching to 30 feet long, will depict Disney animal friends, including Simba, Zazu, Baloo and King Louie. These colorful creations will dance through the sky to favorite Disney songs.

The hosts for this celebration will be Mickey Mouse and Minnie Mouse. They will be decked out in sparkling new EARidescent fashions for the 50th anniversary. Also getting in on the EARidescent fun will be Donald Duck and Daisy Duck, Goofy and Pluto, and Chip ‘n’ Dale. Guests will see these looks at the Magic Kingdom is the new “Mickey’s Celebration Cavalcade” which will take place several times a day.

Finally, special golden character sculptures will debut on October 1 at the Magic Kingdom near Cinderella Castle. There will be 50 characters total in this series of sculptures that will be displayed across all four theme parks. More details about these character statues will be shared soon.

Already announced as part of The World’s Most Magical Celebration will be the debut of Remy’s Ratatouille Adventure. This family-friendly attraction will have Guests feeling like they are the size of Chef Remy and they will scurry through Gusteau’s famous restaurant. This new attraction will be found in a newly expanded area of the park’s France pavilion.

Also in this same area and debuting on October 1 will be a new restaurant called La Crêperie de Paris which will offer both table and quick service options. The menu will feature sweet crepes, savory buckwheat galettes (naturally gluten friendly) and authentic French hard cider.

In addition, Disney has also already announced that they will be debuting the Beacons of Magic at night. During the evening the four park icons will glow. Cinderella Castle will illuminate Magic Kingdom with pixie dust, Disney’s Animal Kingdom will feature a magical fireflies on the Tree of Life, The Hollywood Tower Hotel at Disney’s Hollywood Studios will  evoking the golden age, and at EPCOT, new lights will shine across the reflective panels of Spaceship Earth, connecting to one another in a symbol of optimism resembling stars in a nighttime sky.

In addition, Disney is searching for Magic Makers. Someone who makes magic by bringing comfort, support and joy to those around them. You can recognize all of the positivity and happiness they’ve brought to you or your community and they may just win a trip to Walt Disney World Resort and a one-year subscription to Disney+!

Starting today through Oct. 1, 2021, you can nominate any person who inspires you for the Disney Magic Makers contest by visiting disneymagicmakers.com and sharing the positive impact they have made. You can also share their amazing story with a post using #DisneyMagicMakers on Instagram, Facebook, Twitter or TikTok. Fifty nominees whose inspirational acts of kindness, compassion, and creativity best exemplify the values of a Disney Magic Maker will win a trip to Walt Disney World Resort.

So, the question is, who else is going to be celebrating the 50th anniversary of Walt Disney World! I certainly am!