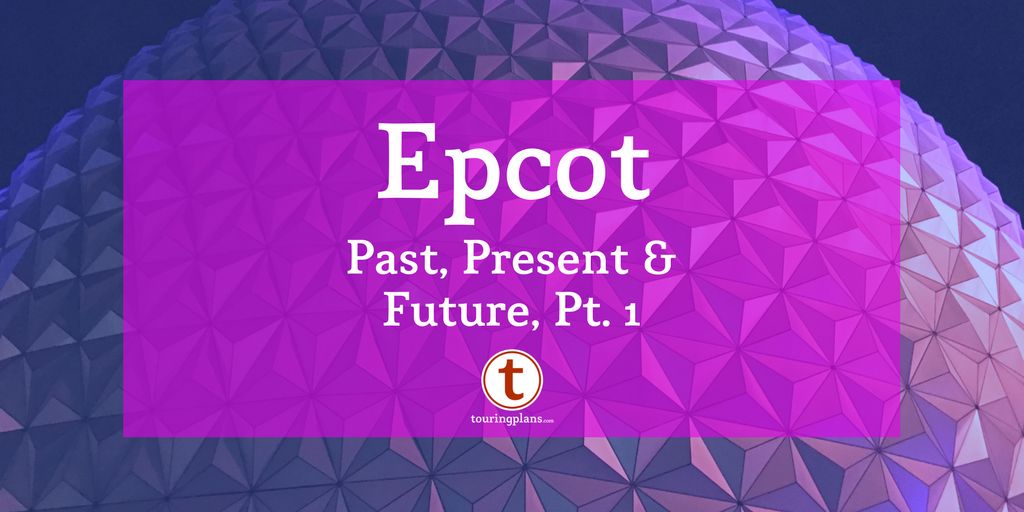 Can you believe Epcot is celebrating its 35th anniversary this year? On October 1st, 1982, Epcot first opened its gates and offered two themed lands: Future World and World Showcase. While World Showcase hasn’t changed too much through the years, Future World is a whole other story and more changes are on the horizon. So as this park of the future looks to its own great, big, beautiful tomorrow, let’s take a look at the past, present, and future of Epcot’s Future World!

Note: Because there’s so much to cover in Future World, this article will focus on Spaceship Earth, Innoventions, and Future World East.

In the park’s early years, Epcot was known as EPCOT Center and Future World featured a number of pavilions themed after a particular area of science or technology and funded by a corporate sponsor. But as the years passed, Future World pavilions and their attractions were either replaced with thrill rides, received overlays, or closed completely. Basically, the Future World of today doesn’t resemble its original self or the future either.

Thankfully, Disney announced at the 2017 D23 Expo that changes were quickly coming to Epcot’s Future World and they would only be the beginning! So let’s start our look at the past, present, and future of Future World with the very first thing you see when entering the park.

While the icon of the Magic Kingdom is Cinderella Castle, the icon of Epcot is Spaceship Earth! This massive geodesic sphere actually contains an attraction that teaches guests about the history of communication. The Past – Spaceship Earth opened with the park in 1982 and was sponsored by Bell Systems. Guests boarded an omnimover that transported them past scenes filled with audio-animatronics highlighting communication breakthroughs in history narrated by Lawrence Dobkin. The finale showcased projections of outer space and the earth before the omnimovers descended backwards to the unloading area.

The Present –  Spaceship Earth has undergone a number of updates, as well as sponsorship changes and changes in narrators. For many people, Walter Cronkite and Jeremy Irons provided some of the most memorable lines in the Spaceship Earth narration. Siemens was the most recent sponsor of Spaceship Earth and the current narrator is Judi Dench. Today’s ride back to the unloading area also features an interactive screen where guests can pick their vision of the future.

The Future – Nothing new has been announced for Spaceship Earth and it’s unknown whether or not it will receive a new corporate sponsor.

Two crescent-shaped buildings sit behind Spaceship Earth and have served as a show floor for technology exhibits and interactive stations since the park opened.

In EPCOT Center’s early years, these two buildings were known as Communicore East and Communicore West. Both Communicore buildings had a lot to offer guests, such as a microchip maze, a talking robot, the chance to design a roller coaster, a tour of EPCOT’s computer central, and even a center for teachers.

In 1994, Communicore was changed into Innoventions. This space continued to offer new exhibits, some of which included video games and even a home of the future. In recent years, however, the number of Innoventions exhibits has dwindled. Today, Innoventions East has only one exhibit, Colortopia, still in operation and Innoventions West has no exhibits at all, just a character meet-and-greet location.

The Universe of Energy

The Universe of Energy is Epcot’s energy pavilion. It opened with the park in 1982 and is located in Future World East.

Past – Universe of Energy

The Universe of Energy pavilion opened with the park in 1982 and was sponsored by ExxonMobil. The pavilion’s attraction taught guests about energy sources through both audio-animatronics and film. The ride vehicles, or theater cars, were powered by solar panels covering the ride building and guests were told they were riding on sunshine!

In 1996, Ellen’s Energy Adventure replaced the original Universe of Energy attraction. This comedic version taught guests about the origins and future sources of energy with Ellen DeGeneres and Bill Nye the Science Guy. The attraction recently closed on August 13th and awaits an overhaul.

Future – Guardians of the Galaxy

At the 2017 D23 Expo, Disney announced Ellen’s Energy Adventure will be replaced with a Guardians of the Galaxy attraction! Apart from a few pieces of concept art, we don’t know much about this future attraction.

The last of the pavilions added to Future World, Wonders of Life is located in Future World East and was themed around good health and the human body.

Past – Wonders of Life

The Wonders of Life pavilion opened in 1989 and was sponsored by MetLife. The pavilion housed a number of exhibits, a movie called “The Making of Me”, and two main attractions. Body Wars was a simulator attraction, much like Star Tours, that shrunk guests down and took them inside the human body.

Wonders of Life also offered Cranium Command. This charming show featured an audio-animatronic pilot named Buzzy who piloted the brain of a twelve-year-old boy through a typical day, illustrating how the brain works with the different parts of the body.

The pavilion’s exhibits and attractions closed permanently in 2007, and the pavilion is now used a center for Epcot’s seasonal festivals.

Nothing has been announced regarding the future of the Wonders of Life pavilion. However, tentative concept art released for the new Future World shows the building still standing.

Horizons opened in 1983 and was sponsored by General Electric. This pavilion was the thesis of EPCOT Center, illustrating how the all of the themes and topics of Future World can culminate to create a better future.

Guests boarded a suspended omnimover and enjoyed a ride experience that included both physical scenes with audio-animatronics and film on OMNIMAX screens. Guests were shown how people of the past viewed the future before touring futuristic settings and a glimpse of how families would live in the years to come. Horizons was also unique in that guests were given the ability to choose the ride’s ending! Guests would press a button for how they wanted to return to FuturePort with options like the underwater research base of Sea Castle, desert farm Mesa Verde, or space station Brava Centauri. Regardless of what guests chose, their selected ride back offered the sensation of flight. So basically, Horizons was both a simulator and a dark ride! Now if you don’t love this past attraction enough, Horizons was also thought to be a continuation of the Magic Kingdom’s Carousel of Progress.

Horizons closed permanently in 1999 and the pavilion was demolished.

Mission: SPACE, sponsored by HP, opened in 2003 in the place of Horizons. Mission: SPACE is a space shuttle simulator attraction which uses a centrifuge to give guests a realistic experience as they launch into space, slingshot around the moon, and land on Mars. Each guest is a member of the team and has a role to play during the mission, just like real astronauts.

Mission: SPACE had offered two versions of the same ride. Guests who joined Orange Team experienced the intense version of the ride while those joining Green Team didn’t have to worry about possible nausea from the spinning centrifuge. Today, Green Team guests experience a flight around the world while Orange Team guests still go to Mars, but with an updated ride film.

The 2017 D23 Expo revealed that Mission: SPACE is gaining a space-themed restaurant adjacent to the attraction. Operated by the Patina Restaurant Group, the restaurant will offer views into outer space!

Test Track is Epcot’s transportation pavilion and is appropriately circular. This Future World East pavilion has been home to two transportation-themed attractions during its history.

Past – World of Motion

World of Motion was EPCOT Center’s transportation pavilion sponsored by General Motors. Guests boarded on omnimover which spiraled up a ramp before re-entering the pavilion. World of Motion offered an amusing look at both the history and future of transportation with a huge cast of audio-animatronics. World of Motion closed in 1996 and was replaced with Test Track in 1999. The original Test Track ride experience was similar to today’s, but the focus was on the physical crash tests vehicles undergo for safety.

The current version of Test Track opened in 2012, sponsored by Chevrolet, and boasted a new, sleek, futuristic style and color scheme. Today’s Test Track lets guests design their own virtual vehicle and then test their design against criteria like efficiency, speed, capability, and maneuverability on the ride. Guests board a simulation vehicle which takes them through the different tests. After the finale, and an outdoor lap reaching a max speed of 65 mph, guests see on screens how their designs measured up.

Future – Since Test Track was updated in 2012, and is very popular with guests, nothing new has been announced or probably will be announced for this attraction.

So that’s a look at the past, present, and future of Epcot’s Future World East. Stay tuned to the TouringPlans Blog for Part II where we cover Future World West! So are you looking forward to the changes coming to Epcot? Do you remember when Epcot was EPCOT Center? What past attractions do you miss? Let us know in the comments.

6 thoughts on “The Past, Present, and Future of Epcot’s Future World Part I”