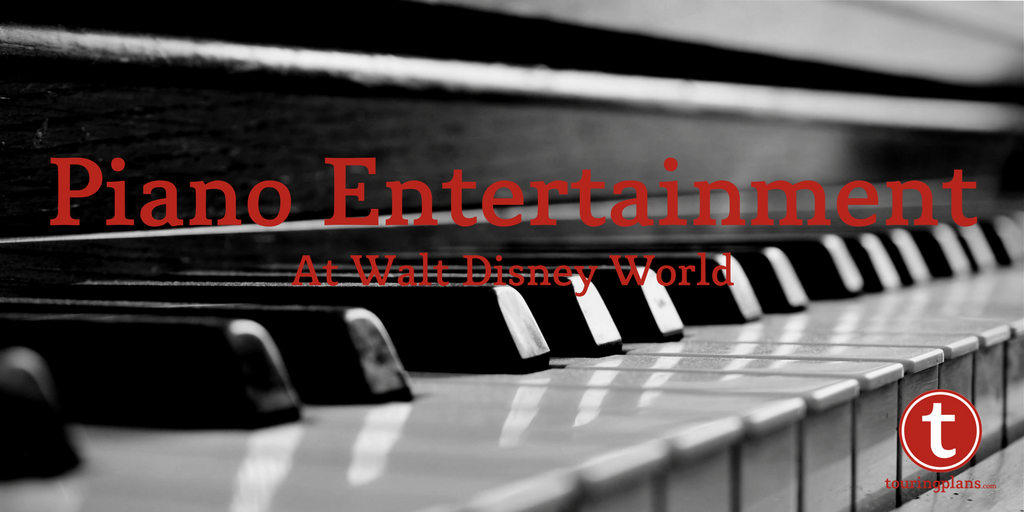 Disney World guests can choose from an array of extravagant entertainment from full-scale stage shows like Beauty and the Beast – Live on Stage at Disney’s Hollywood Studios to nightly theme park spectaculars like Magic Kingdom’s Wishes Nighttime Spectacular. The wow factor of these shows in undeniable, but Disney World also features numerous fantastic smaller-scale acts inside and outside of the theme parks. Among these, it is surprising how many of my favorites feature some extremely talented pianists.

This article takes a look at some of these fantastic piano acts and how you can make them part of your Disney World visit. Plus, just for fun, we point to several Disney World attractions and other venues where you can spot fabulous piano props and theming.

Live Piano Entertainment to Include in Your Disney World Plan

Yehaa Bob Jackson at River Roost Lounge. With a great big personality and a rollicking good time of a show, Yehaa Bob entertains resort guests and long-time fans at River Roost Lounge located at Disney’s Port Orleans Resort – Riverside. During his show combining music and comedy, Yehaa Bob is a master at getting his audience singing along, dancing, and cheering each other on. Each guest becomes part of the fun as Yehaa Bob visits tables and poses for photo ops. It’s no surprise that Yehaa Bob, who has been entertaining Disney World guests since 1997, was a Legacy Award recipient in 2013, one of Disney’s most prestigious awards for Cast Members, Crew Members, and Imagineers.

Where and when: Shows take place every Wednesday through Saturday night at Port Orleans – Riverside’s River Roost Lounge at 8:30 PM and 10:30 PM. The show is family-friendly, there is no cover charge, and you can just enjoy the show or grab a table and order drinks or food.

Casey’s Corner Pianist. It’s easy to rush by Magic Kingdom’s Casey’s Corner at the end of Main Street, U.S.A. on your way to the next attraction, but slowing down for at least a few minutes when the Casey’s Corner pianist is performing will pay off big time. I guarantee that you will be massively impressed by the talents of the pianist playing lively Disney and ragtime tunes. The music will also greatly increase your immersion in the Main Street, U.S.A. atmosphere. Get even more involved by making a request.

Where and when: 20-minute sets usually start around noon and run until 6-7 PM outside of Casey’s Corner hot dog stop. You can check a specific date here or obtain the Magic Kingdom Times Guide at the front of the park.

What else to do: Grab a hot dog at Casey’s Corner or an ice cream across the street at the Plaza Ice Parlor to enjoy while you watch the show.

Grand Floridian Lobby Pianist. The lobby pianist at Disney’s Grand Floridian Resort is, of course, far more subdued than Yehaa Bob or the Casey’s Corner pianist, but the performance is just as enjoyable and incredibly relaxing. Listening to Disney tunes while you relax in a comfortable chair in the Grand Floridian’s spacious lobby is a great way to rejuvenate after several hours in the parks. The pianist will take requests and alternates with the Grand Floridian Society Orchestra.

Where and when: The piano is situated on the main floor of the lobby, which makes it easy to check out the beautiful piano and chat or put in a request with the pianist. Sets generally start at 3 PM, with the last one after 8 PM. You can check a specific date here.

What else to do: Check out the rest of the gorgeous lobby and its shops on the upper floors. Have a drink at Mizner’s Lounge, located upstairs from the main lobby floor behind the bandstand.

Jellyrolls. Jellyrolls is piano bar for guests ages 21 or older located on Disney’s Boardwalk that features dueling pianists playing music from the 70s, 80s, 90s, and more on baby grand pianos. The lively pianists do a fantastic job of getting the audience involved as they take requests, mix in some jokes as they play, impress the crowd by playing (and singing) from memory, and encourage the audience to sing along. Jellyrolls is a great place for some people watching and cocktails (there is no food to order but there are free baskets of popcorn). The fun is non-stop, with two sets of dueling pianists switching off throughout the night.

There is a $12 cover charge, and be sure to bring some small bills to tip the pianists when making requests (the bigger the tip, the sooner your request will be granted).

Where and when: Jellyrolls is open every night from 7 PM to 2 AM, with music starting at 8 PM. It is located toward the end of Disney’s Boardwalk on the far side from Epcot.

What else to do: Start the night off by enjoying some of the entertainment on the Boardwalk—including jugglers, magicians, and caricature artists—or renting a Surrey bike. You could also check out the new AbracadaBAR.

When and where: 45-minute sets run from mid to late afternoon Sunday through Thursday at the Rose & Crown Pub in Epcot’s United Kingdom Pavilion. You can check a specific date here or obtain the Epcot Times Guide at the front of the park.

What else to do: Enjoy a pint and toast the musician!

When and where: The show has three performances each night at Pioneer Hall at Disney’s Fort Wilderness Cabins. See here for more details and pricing.

What else to do: Fort Wilderness abounds with recreation options. Arrive early to enjoy the resort’s walking paths or petting zoo, rent bikes or a boat, take an archery lesson or a pony ride, go fishing, and more.

Piano Props to Include in Your Tour

You can continue the piano theme by keeping your eye out for piano props in the Disney World parks. I’ll give you a hint: Magic Kingdom is the place to look. It should be easy to work all or some of these props found in Magic Kingdom into the rest of your touring.

Eavesdrop on a piano lesson. Take a quick trip down Center Street, a side street off Main Street, U.S.A. in Magic Kingdom and take a moment to listen. You’ll hear the sounds of lessons being conducted from a second story window, including dance, voice, and piano lessons.

Country Bear Jamboree. Join the Country Bears as they sing and dance their way through a country hoedown at Magic Kingdom’s  Country Bears Jamboree attraction. The bear named Gomer plays a piano topped with a beehive with two straws for sippin’ some (fermented?) honey. Gomer doesn’t sing during the show but his piano playing is featured in several songs.

Honorable mention: The All-Star Music Piano Pool claims the title of the largest piano prop in all of Disney World. The grand piano shaped pool at Disney’s All-Star Music Resort features black and white keys on the pool deck.

So there you have some ways to add piano entertainment to your Disney World visit. If I missed any of your favorites (or a hidden gem), please let me know in the comments.

A special thanks to Todd Hurley for his excellent photo of the Haunted Mansion Ghostly Piano. Check out more of his work at https://www.flickr.com/photos/thhphotography.