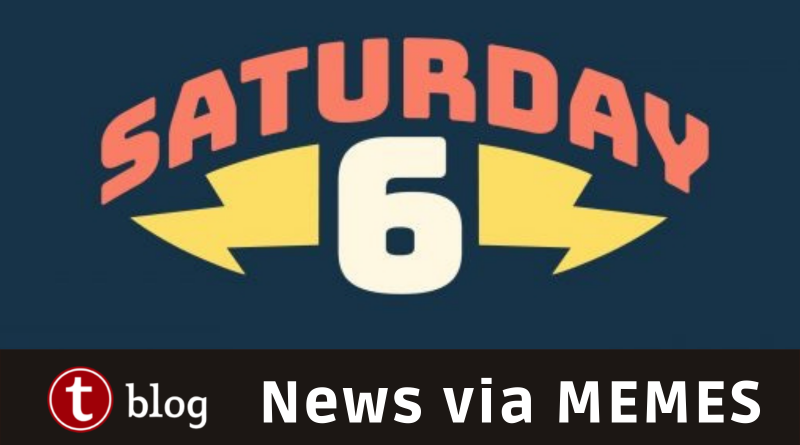 This week’s SATURDAY SIX takes a look at recent theme park news via MEMES! Late last year we here at the SATURDAY SIX asked an important question: Is December 2019 the craziest month in theme park history? Turns out the answer was a resounding NO, because each and every month since then has been even crazier than the one before it. In fact, the world we are currently living in now is like that scene in the movie Interstellar where the astronauts visit a planet where one second is the same length of time as one year back on planet Earth.

In the year 2020, the news is coming at us faster than ever before. The only thing that moves faster than the news? Social media MEMES. What better way to start an article on memes than to look back at ones covering “2020” itself…

One of the more mind-boggling things Disney has ever done – and keep in mind this is a company that once sold a hot dog using a baked potato as a roll – was back in the year 2000 when it erected a giant wand outside Spaceship Earth. Widely thought of as one of the worst creative decisions that The Mouse has done with one of its park icons, Twitter user @TheDisneyDelete gave the world a present by uploading a picture of the wand and encouraging people to “desecrate” other theme park institutions, leading to fun and frivolity. 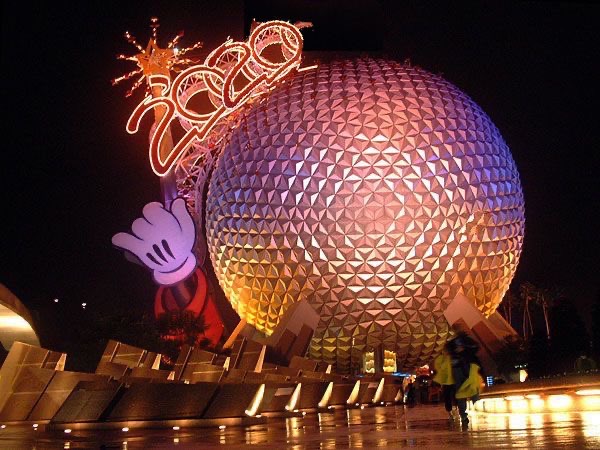 Throughout the storied history of this fine blog series, we have mentioned our friend @drunkatdisney. “Drunky” – as he was affectionately known – was the male model for our look at the Worst Places To Propose at Walt Disney World and our award-winning special investigation into Disney Pet Peeves. Unfortunately, earlier this year Twitter decided to permanently ban Drunky from the social media platform. However, DisTwitter being DisTwitter, instead of mourning our fallen comrade, many have spent the following months having fun at his expense.

# 5 – Boardwalk’s Clown Pool Gets Even Scarier

When you’re thinking of iconic Disney structures to attach the “2020 wand” to, the creepy clown pool at Disney’s Boardwalk Resort is a no-brainer.

However, the infamous clown pool made even bigger news recently when it was discovered that Disney was taking it apart and – most likely – replacing it with something totally different. 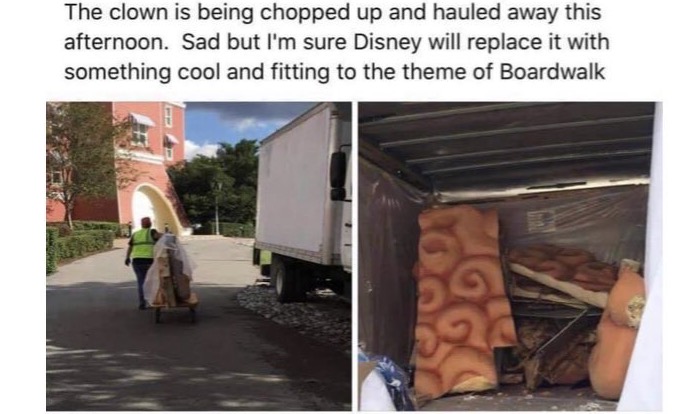 The memesmiths of DisTwitter were of course going to have fun with this, including one user replacing the clown with one of the even weirder looking “nanny chairs” from the Boardwalk’s lobby. 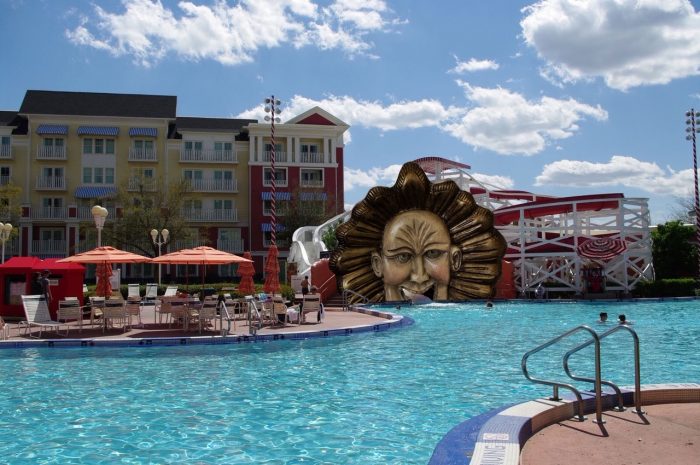 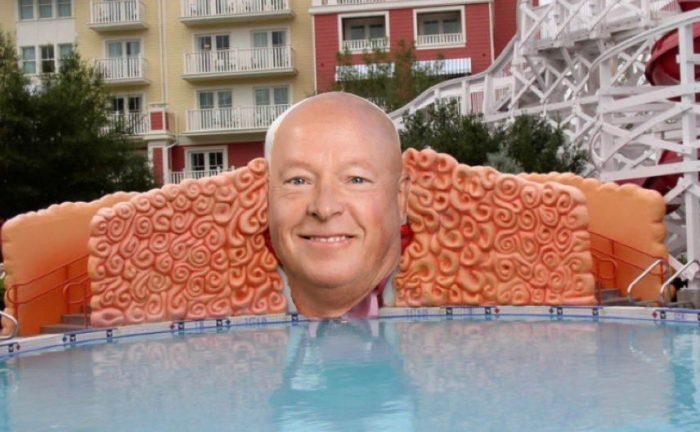 The best thing to come out of this whole situation at Boardwalk is this loving tribute to the infamous clown pool by Twitter user @SonderQuest. If that name sounds familiar it’s because we recently featured a SonderQuest drawing in our look at the Disney Sing Along Series – Disneyland Fun.

One of the most popular accounts on both DisTwitter and theme park YouTube is the Disney Food Blog. However, as Spider-Man famously taught us, with great power comes great responsibility. Recently the “DFB” took people by surprise when a tweet of theirs featured an aerial photo by @bioreconstruct and wrote the following: 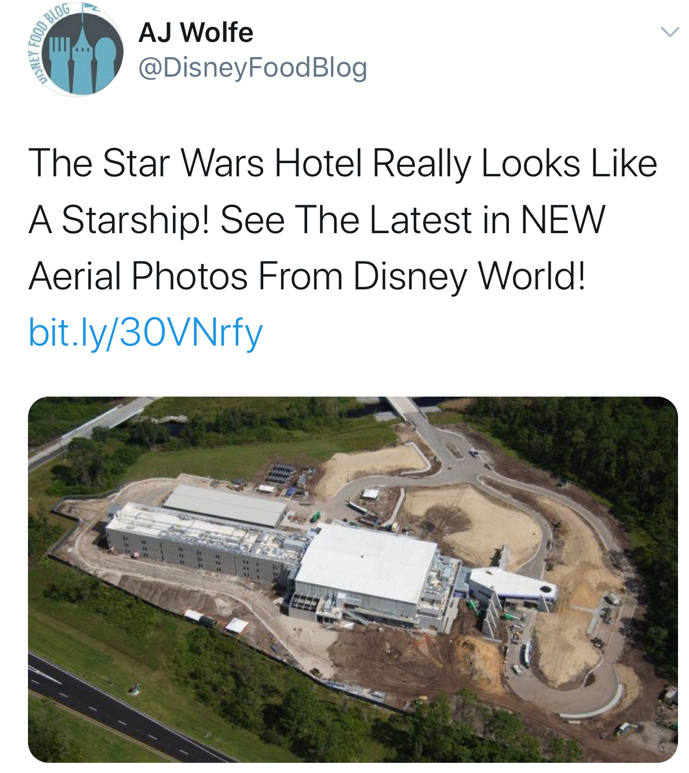 It’s fair to say that not everyone agreed with this statement.

All the popular GIFs for people squinting or giving the side eye were used in response. 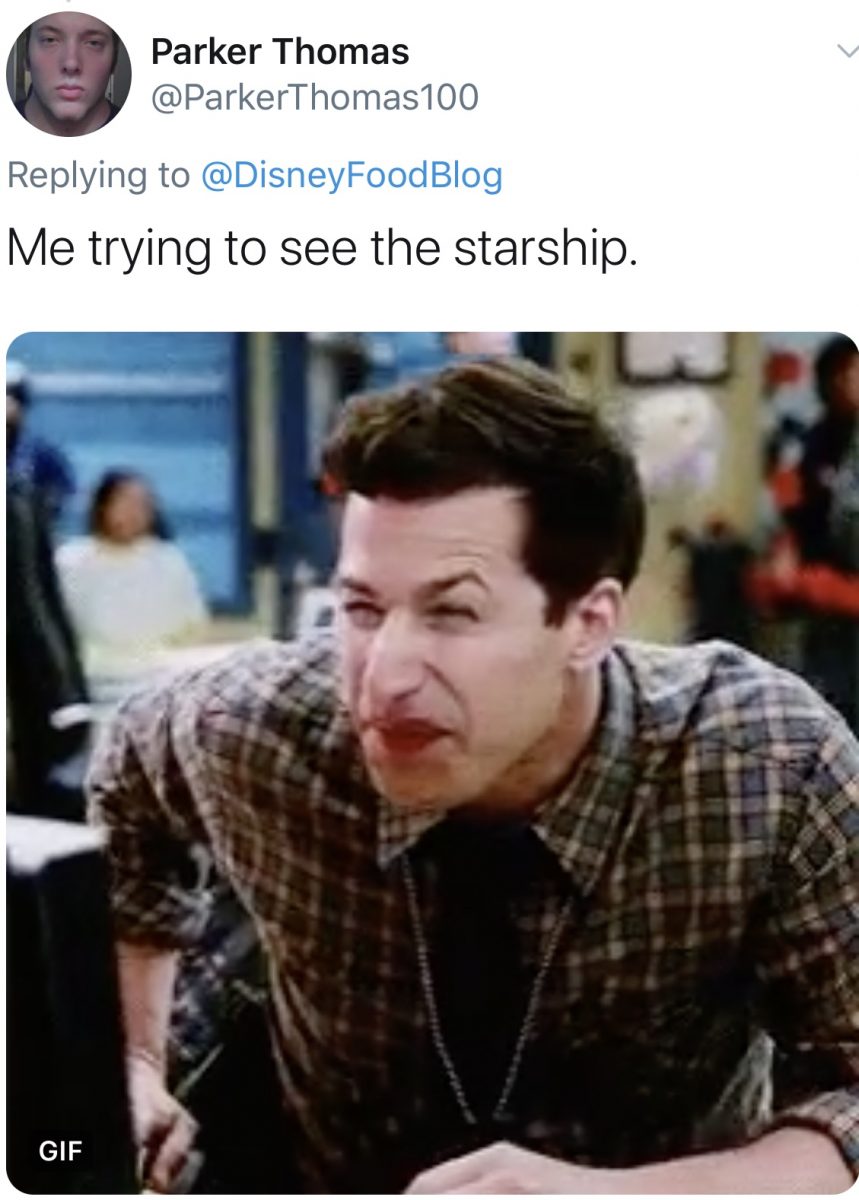 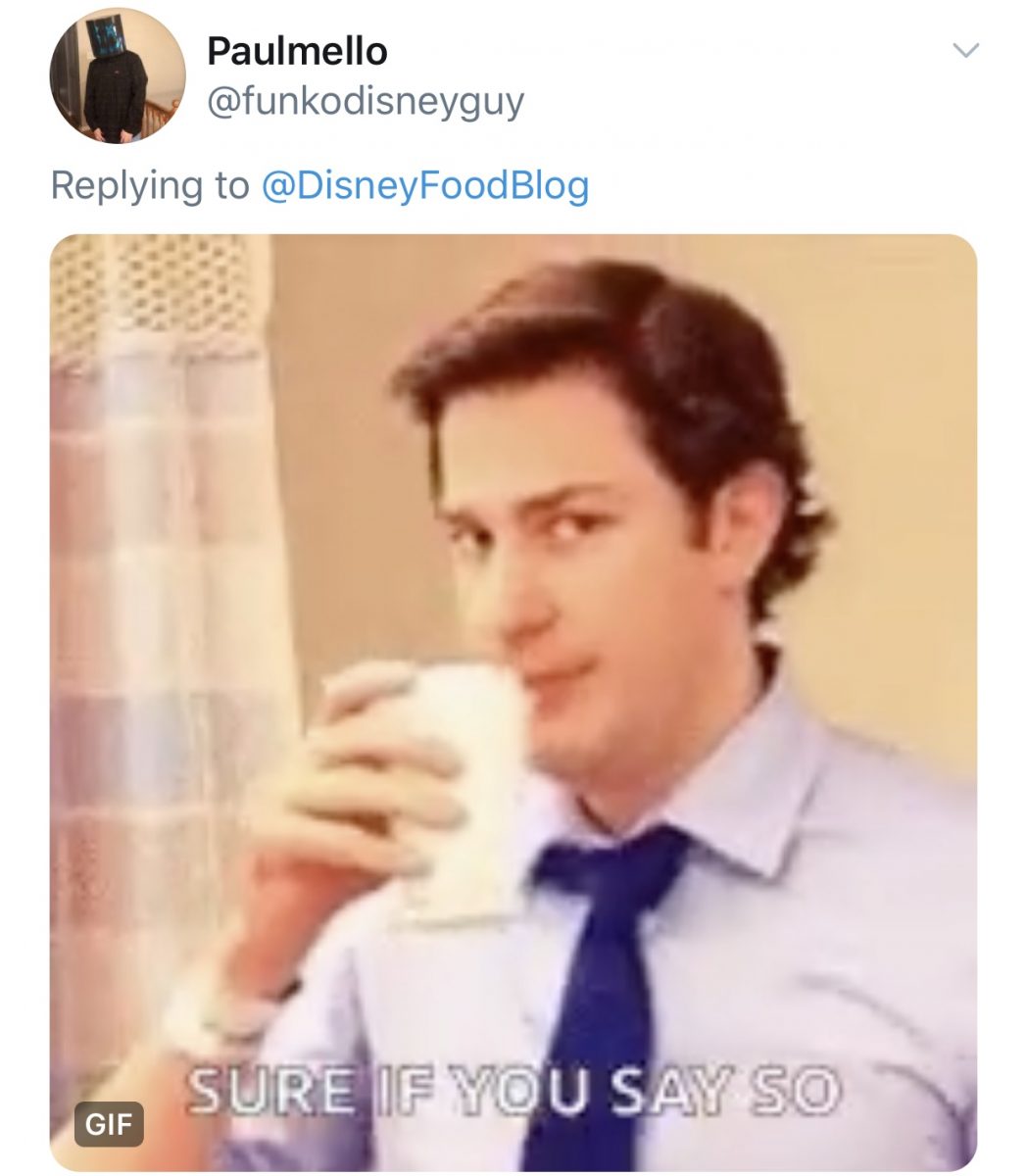 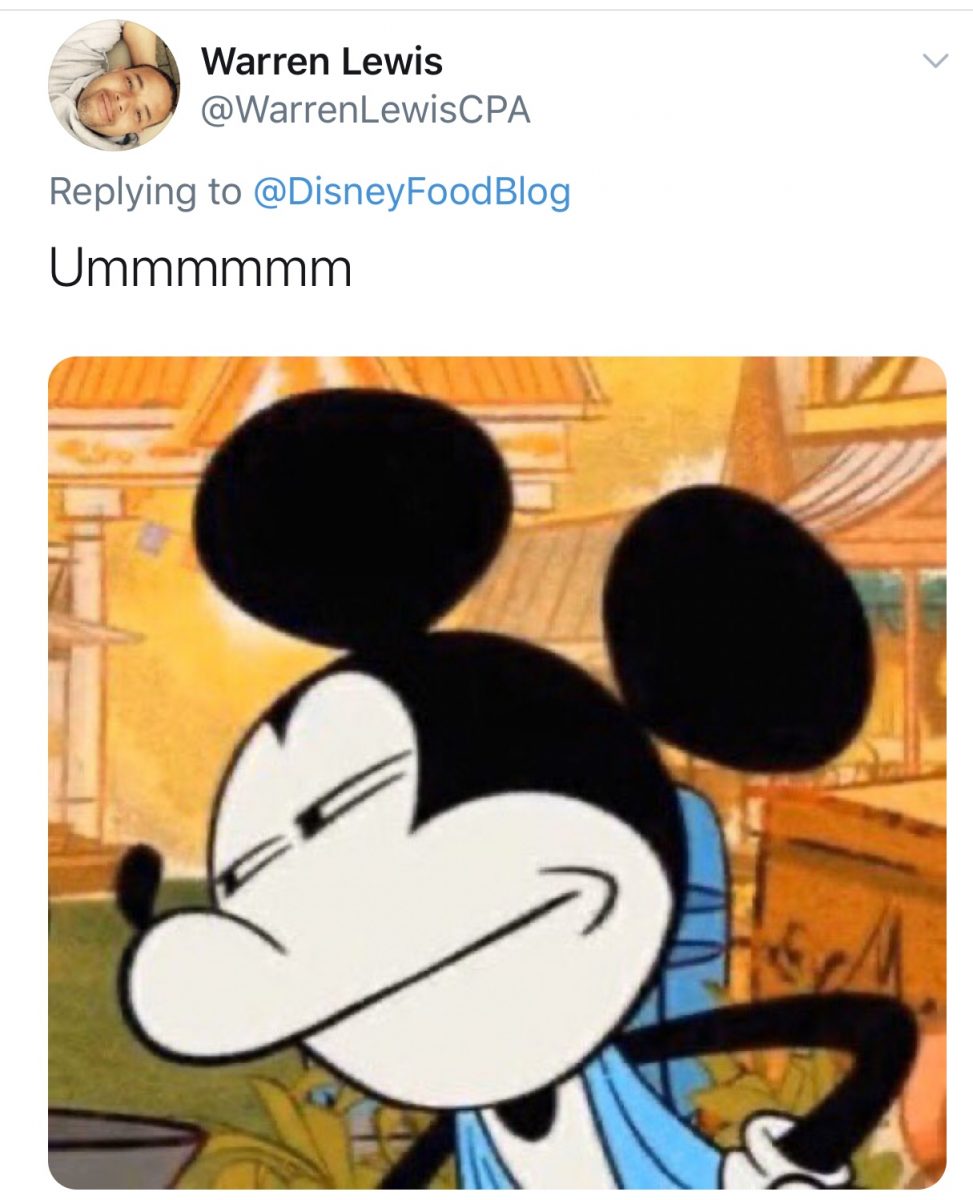 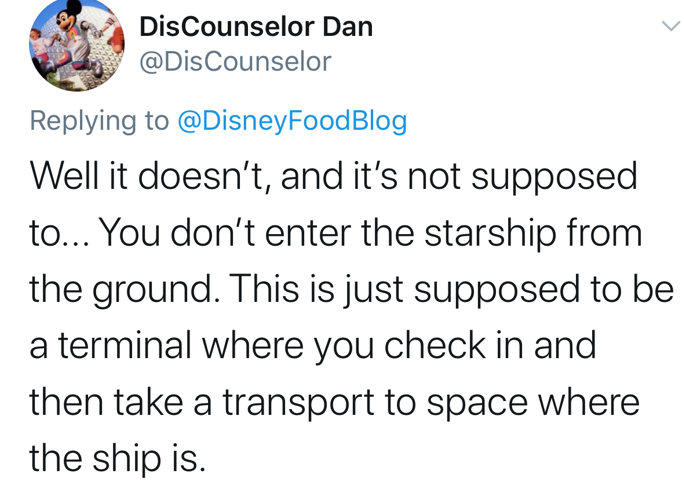 While another user chose the moment to just troll instead. 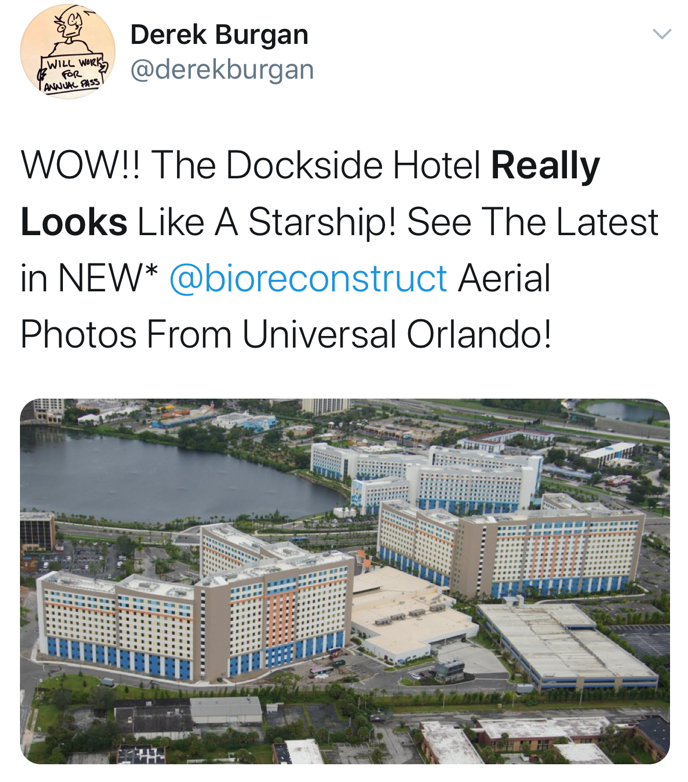 We’ve mentioned in several meme-related articles in the past that often times popular meme formats that have nothing to do with theme parks quickly make their way to DisTwitter. In late September, a Twitter user started a meme trend by posting a screenshot of two people having a conversation in “DM” and a second photo with them together as a couple. The “DM” photo was to show people how the relationship started, and the second with them together was to show people “how it’s going.” The format itself went viral, with thousands – if not millions – of others doing a similar format with their relationships. After doing the How It Started/How It’s Going with personal relationships, DisTwitter then went to work using stuff only us diehards would understand, including this one featuring Walt Disney himself explaining the concept of the Experimental Prototype City Of Tomorrow compared to a certain wand we discussed earlier…. 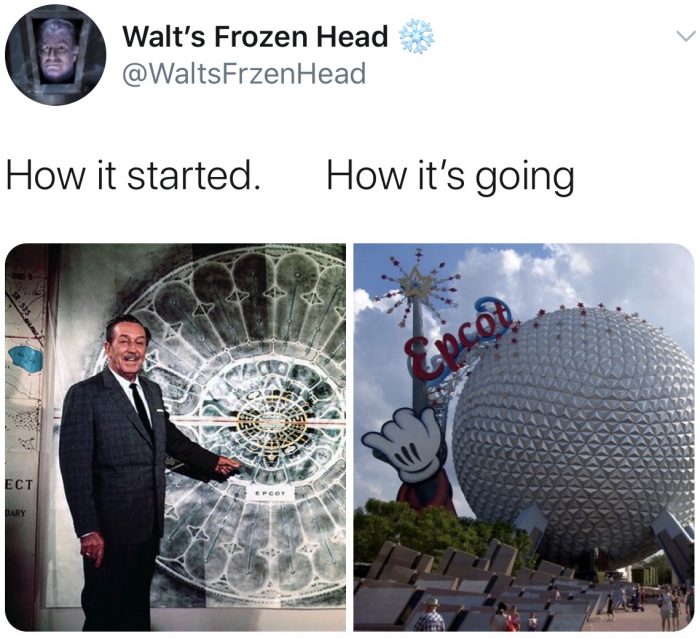 Staying with EPCOT, one user showed the former and current states of Innoventions. 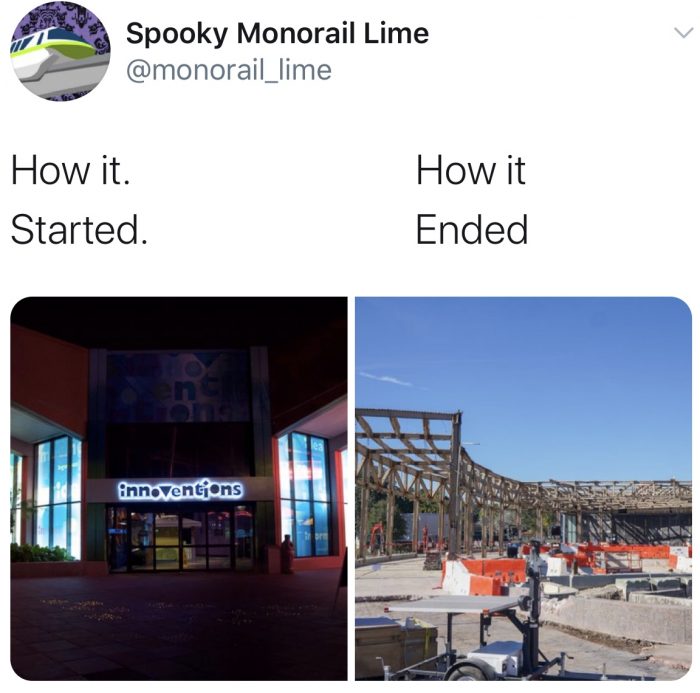 While another took advantage of the seemingly never ending construction of the Space 220 Restaurant in EPCOT by using a photo of Bob Chapek announcing the restaurant back at a D23 Expo event in 2017 along with a more recent photo showing the venue still under wraps. Who would have ever known that in late 2019, when the executive chef of Space 220 quit unexpectedly, that the restaurant would not even open in the following year? 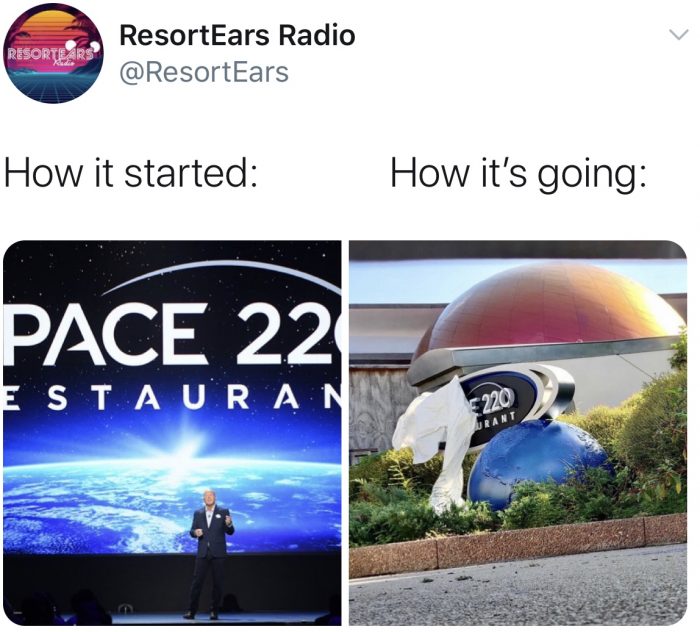 One user “went for the feels” using an old timey photo of kids running happily through Sleeping Beauty Castle at Disneyland compared to an abandoned Disneyland knock-off park in Japan. 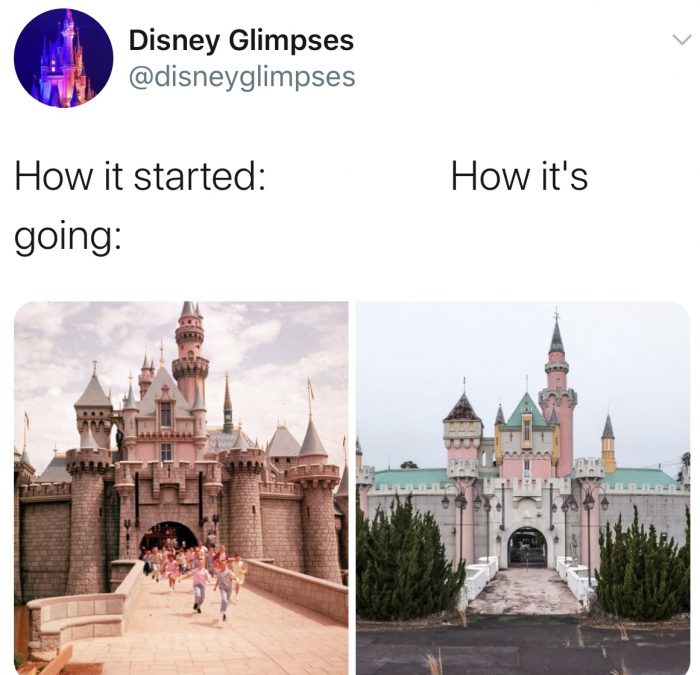 However one of my favorite memes of this format was one which used two empty photos of Star Wars: Galaxy’s Edge, bringing up memories of last year’s disastrous opening of the land out in California. 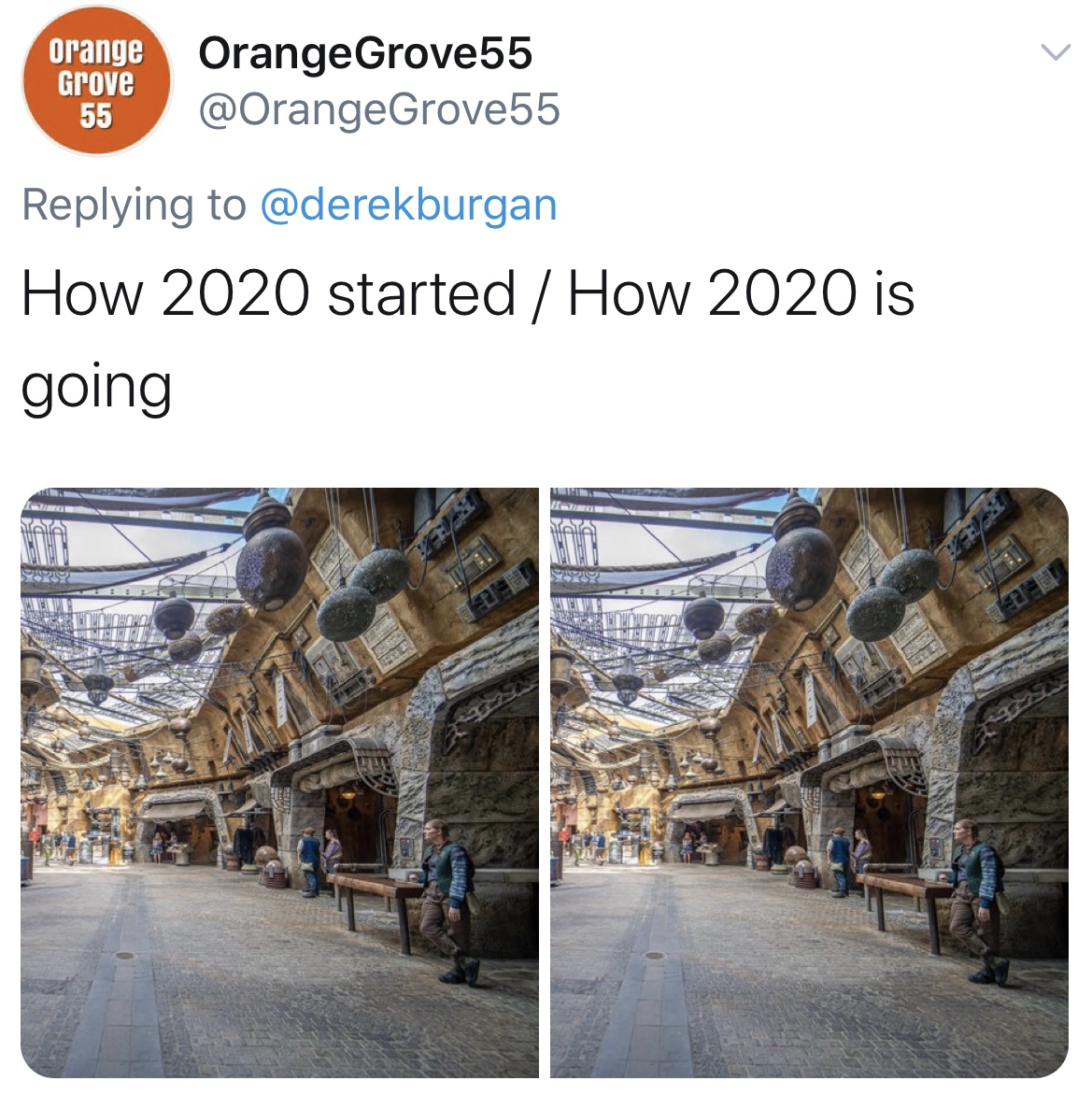 Readers of the monthly Disney Outlet Photo Report will appreciate this meme. While the Disney Parks opened earlier this summer, it wasn’t until last month that the Disney Outlet Stores in Orlando re-opened and – of course – the first people there were eBay pirates. 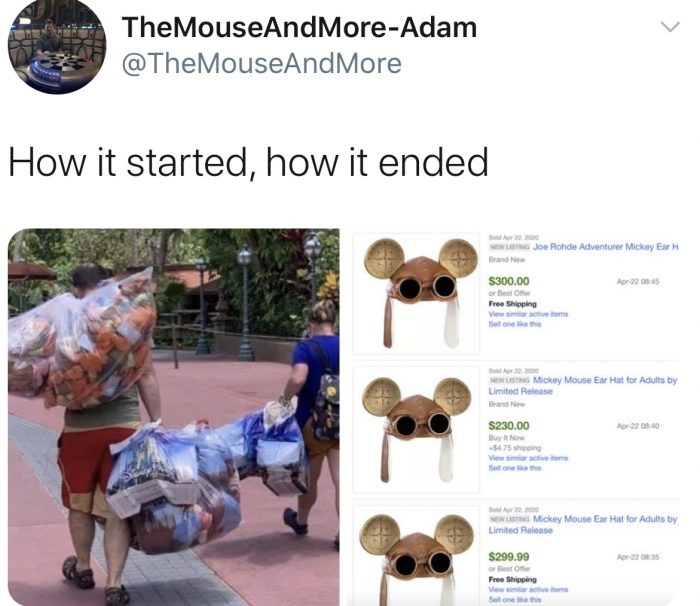 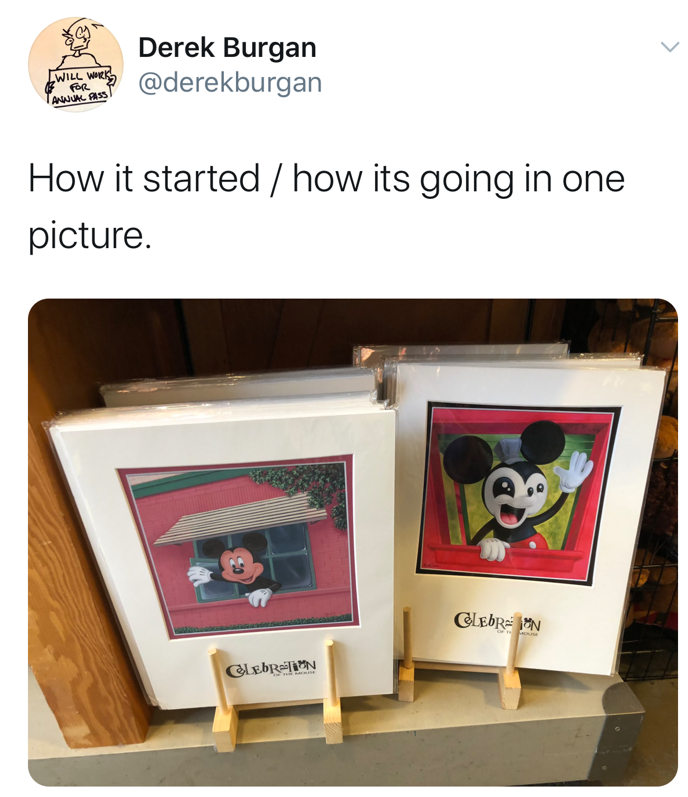 This past week we celebrated “Back to the Future Day”, as October 21st was the day Marty McFly hopped into the Delorean and traveled from 1985 back to 1955. 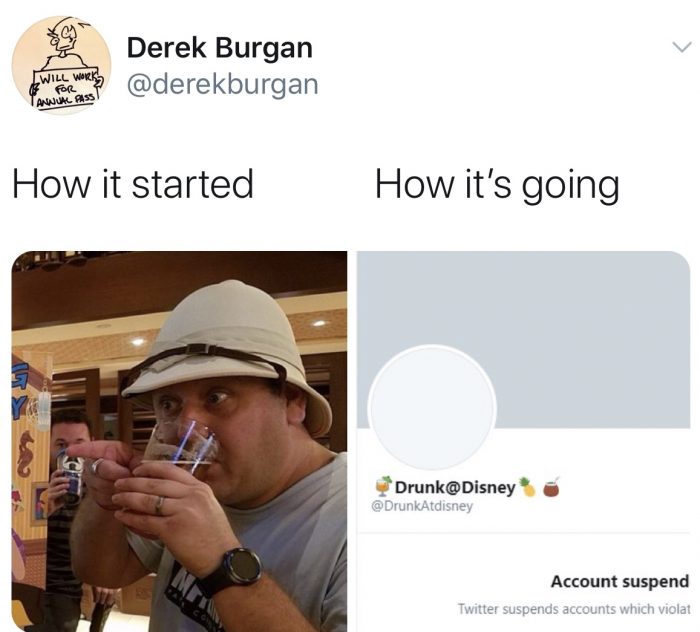 In 2013, a photo of Pope Francis holding a Eucharist wafer during communion was taken. In the years following, that photo has been redone to show the Pope holding all sorts of various items. However, like everything, October 2020 took things up a notch by presenting a tiled version of the Pope Francis photo. In this new format, the users take three photos of Pope Francis broken up and add a fourth photo in to make it appear the Pope is holding something particular as if it were “holy.”

For theme park fans, this would include a phone showing an elusive Boarding Group 1 for Star Wars: Rise of the Resistance attraction. 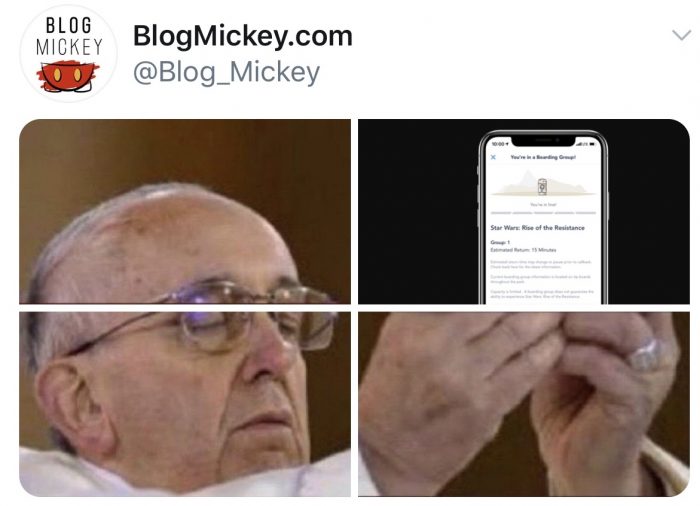 Or a Ronto Wrap. 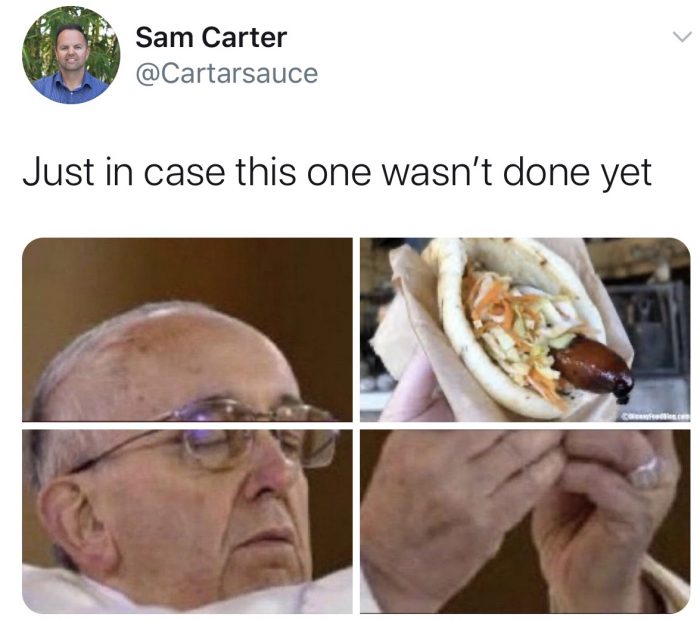 DisTwitter Meme Icon @SuperWeenieHtJr chose one of the beloved entrants to the Disney Signage Hall of Shame. 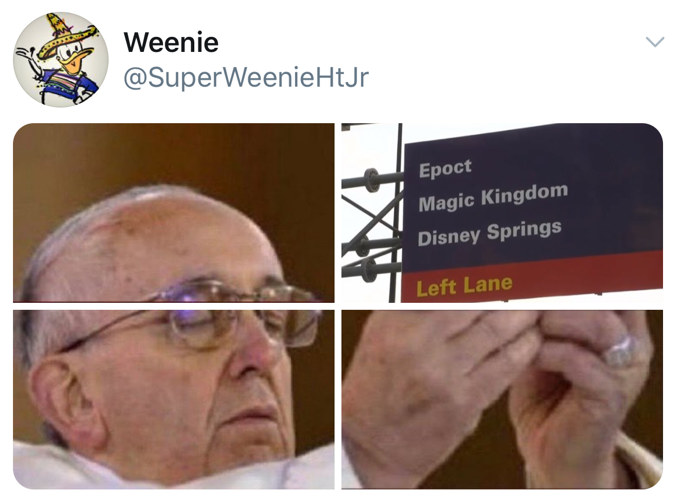 May be a good time to remind everyone that The Mandalorian Season Two debuts next week on Disney+. 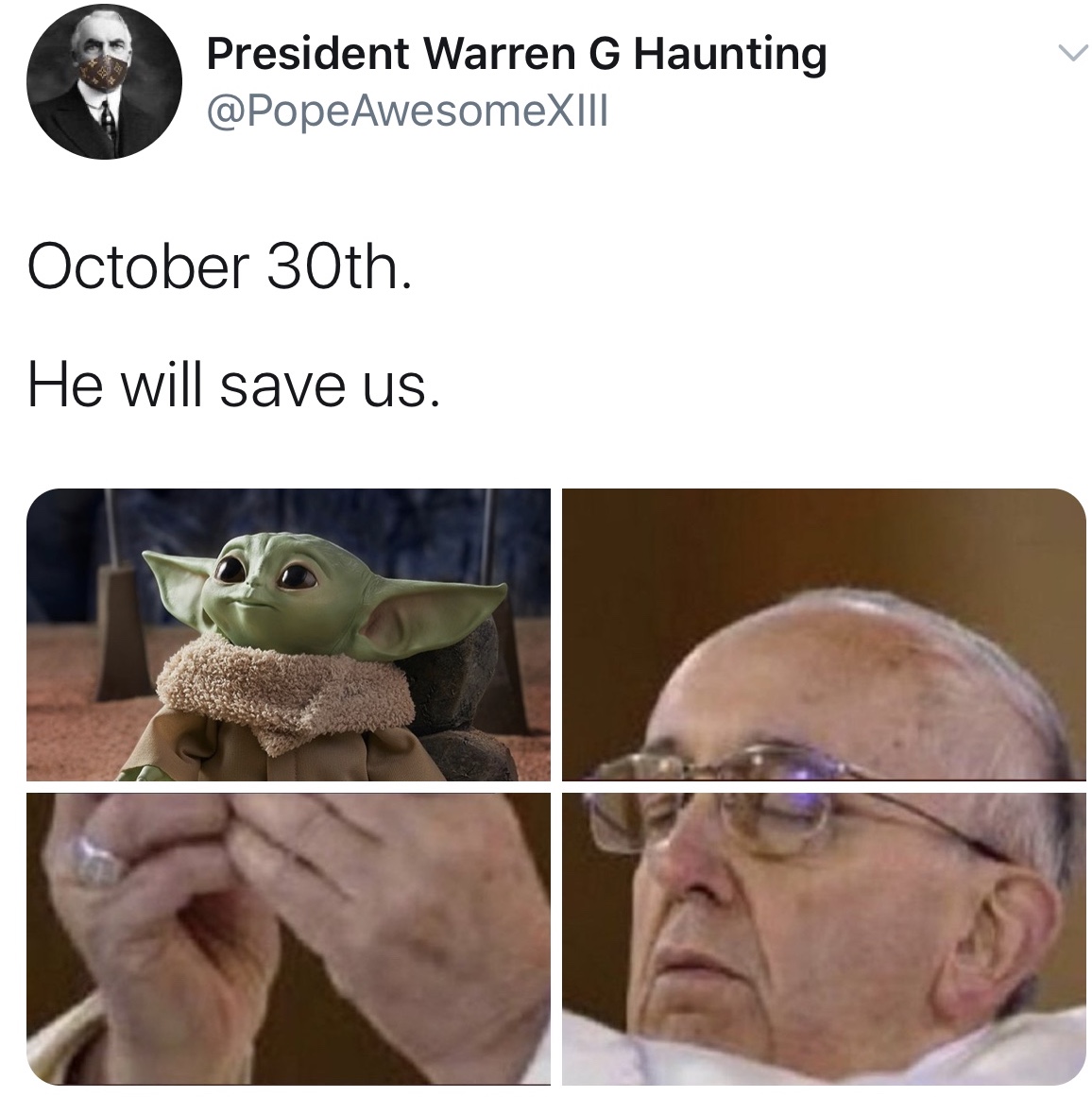 With Disney owning Marvel, we’re going to count this meme using an unforgettable moment from Spider-Man 2. 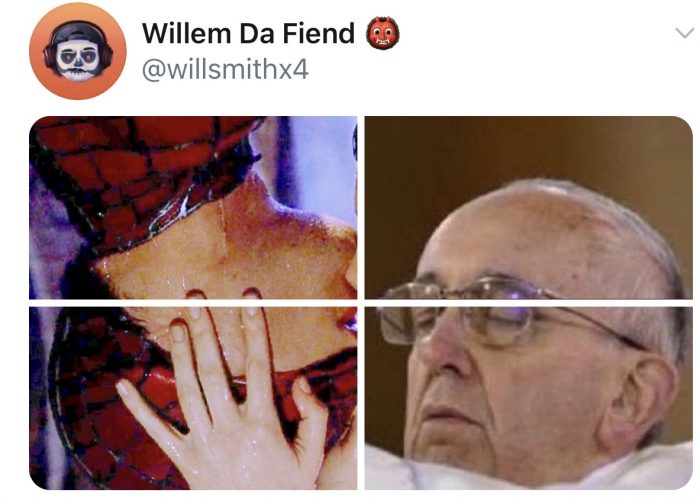 This one featuring baby Simba is straight up E-Ticket. 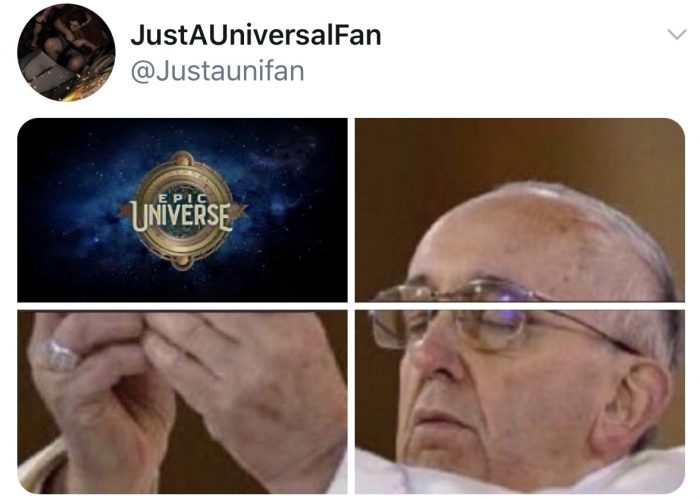 And of course we can’t forget Bacini – the official dog of Distwitter – especially right off his stay at Disney’s Fort Wilderness. 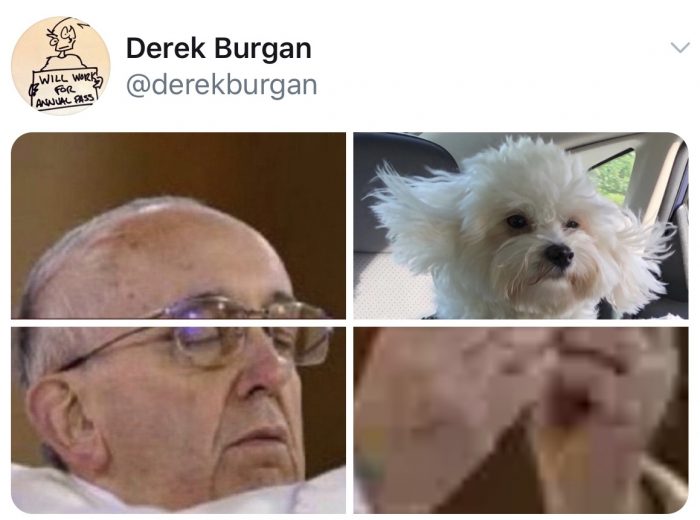 It has been quite the week for the Disney parks out in California. The state finally released the guidelines for which theme parks could re-open, and they were just about impossible. So, what can Disney do with parks they can’t open to guests? I had one thought…

Which led to a suggestion on what I could do with The Happiest Place on Earth. 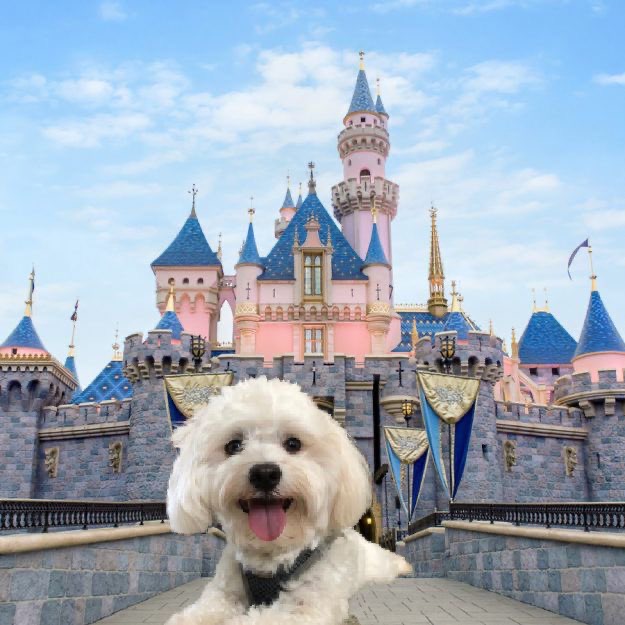 SuperWeenie also brainstormed on what Disney could do with DCA to generate some money while the rides were closed. We can not confirm or deny that this is what gave Disney the idea to open DCA for shopping and dining.

Like Disneyland and DCA, Universal’s theme park in California is still closed because of the strict guidelines that California has imposed on their business. The park’s Twitter account has the following tweet which alludes to the 25% capacity the parks will be allowed to operate at once they are allowed to reopen their doors.

The President of Disneyland Resort had a more formal response. 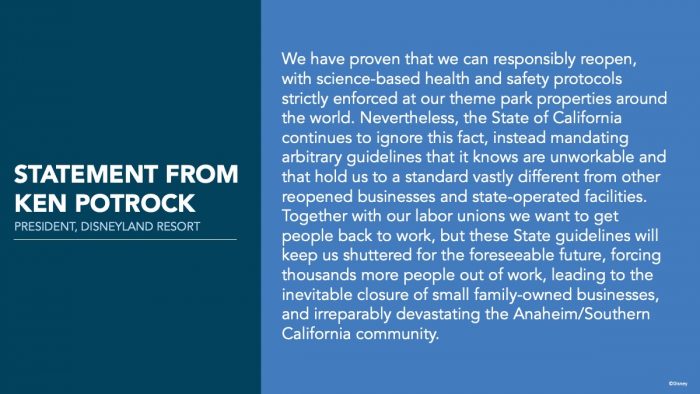 However, this meme sums up the thoughts more succinctly and accurately.

Honorable Mention: WDW Prepares for the Park’s 50th Anniversary in 2021 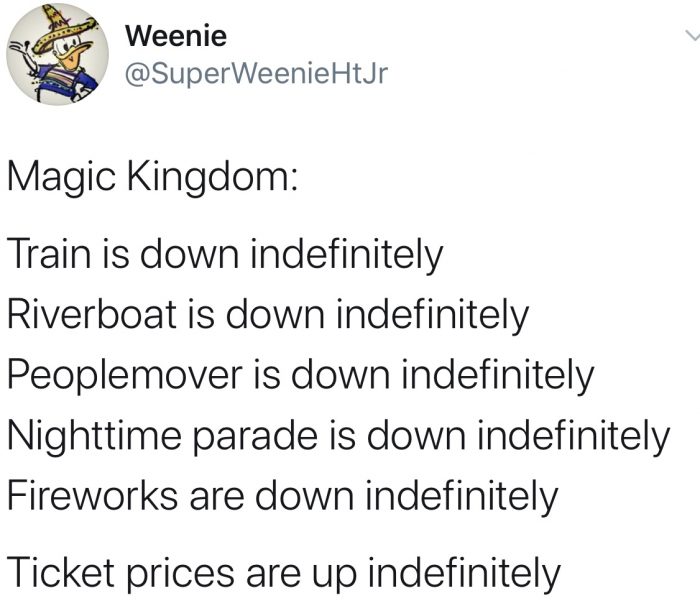 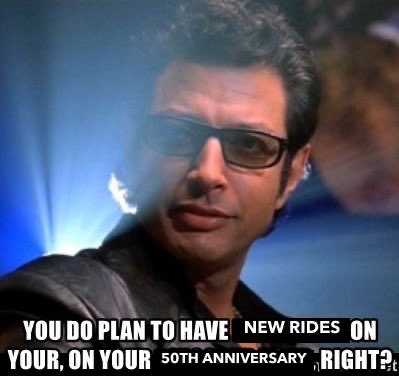 4 thoughts on “The SATURDAY SIX Celebrates MEMEtoberfest: Looking at Theme Park News While Asking “Does the Star Wars Hotel REALLY Look Like a Spaceship?””