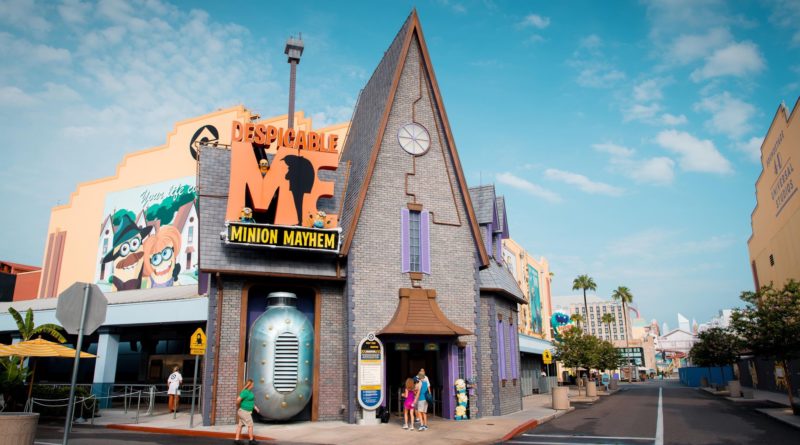 This week’s SATURDAY SIX takes a look at MINIONS! With this weekend being the debut of Minions: The Rise of Gru in theaters, we thought it was time to put on a spotlight on the group of characters who are slowly becoming a huge component of the Universal Orlando Resort.

The appeal of the Minions themselves crosses all demographics. Early word on Rise of Gru is that it will be a huge hit at the box office, thanks in large part to all the adults who are interested in the antics of these goofy characters.

The Minions themselves are used to success though. The original Despicable Me made almost $550M at the world wide box office, which is a fantastic number for an animated film. However, the sequels Despicable Me 2, Despicable Me 3, and the first Minions movie averaged a Billion dollars each. In Hollywood, that’s not an easy thing to accomplish. Tom Cruise, one of the all time biggest movie stars of the last 30 years just had his first ever Billion dollar film with Top Gun Maverick. It’s a big deal, and the Minions are the only animated property not owned by Disney who have breathed in that rarefied Billion Dollar Air. With that type of popularity across the globe, it should be expected that we see them represented inside a theme park. Disney’s most recent “Billion Dollar babies” include the original Frozen and its sequel along with sequels for The Incredibles, and Toy Story. All three of those properties have been part of some major additions to Disneyland and Walt Disney World over the past few years, including Toy Story Land at DHS and  an Incredibles-themed hotel room at The Contemporary. Today we’re going to look at how Universal Orlando has incorporated these pint sized mischief makers into their resort, starting with…

After many years of trying, Universal finally delivered a nighttime spectacular that can compete with what we regularly see over at Disney. Okay, it doesn’t quite meet the levels set by Happily Ever After or Illuminations, but Cinematic Celebration is a massive leap for nighttime Universal entertainment. One feature that has made the show more enjoyable to watch than others held in the same lagoon previously is the fact that there is a centralized location in Central Park for the viewing audience. In previous shows, such as Cinematic Spectacular, guests could watch the show from literally anywhere around the lagoon, causing sightlines to range from “good” to “awful.” It’s impossible to serve that many masters, and  ends up disappointing a majority of them. With a more organized viewing area, Universal Creative can focus its efforts on the actual show, and boy did they. With the combination of fountains, water screens, projection mapping, lasers and fireworks, the show displays many of the Universal park’s insanely popular brands and conclude with a rousing – by Universal’s standards at least – finale.

What’s interesting, is even with a loaded line-up of tremendously popular IP – including Fast & Furious, Jurassic World, and the Boy Who Lived himself, Harry Potter – it is Despicable Me and the Minions who are given the “main event spot” to finish out the show.

Gift shops are a necessary evil in the theme park world, and as a huge fan of park merchandise there are two things I appreciate when shopping: 1) Elaborately themed stores (such as the Kwik-E-Mart in Springfield or Spongebob Storepants in KidZone) 2) Merchandise that is exclusive to the parks. The Minions do have their own themed gift shop at the exit of Despicable Me: Minion Mayhem, but you will also see a metric ton of Minions merchandise in Universal Studios Florida, Islands of Adventure, CityWalk, and all of the onsite hotels. 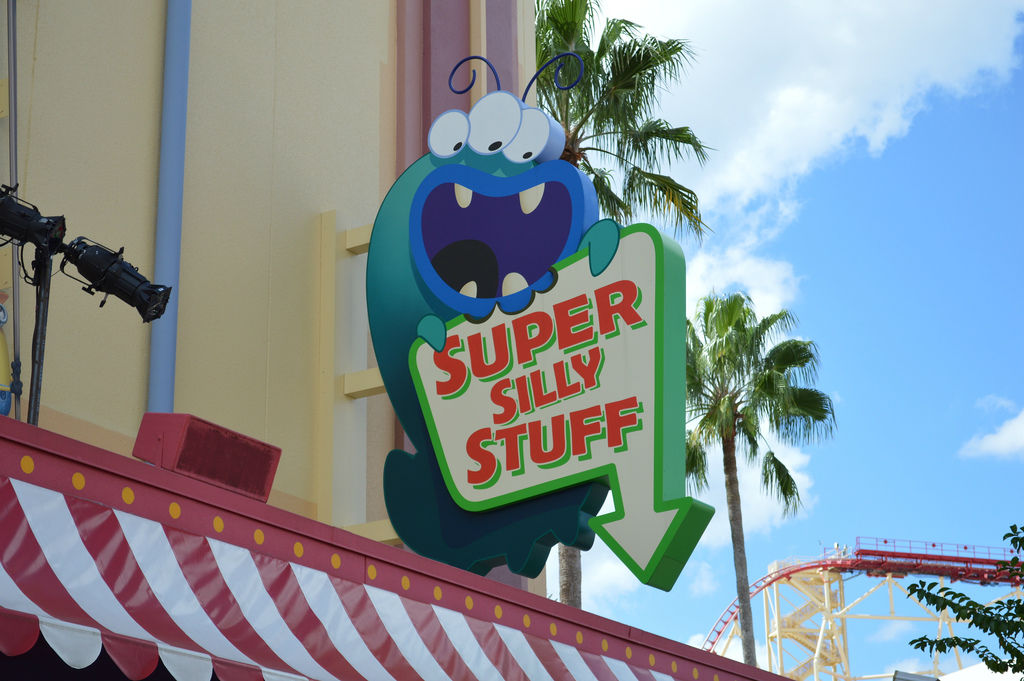 For me, I love snacking my way around Universal and there are some great Minion-themed options, including several candy bar flavors.

I always find it fascinating that two items you almost rarely see in The Real World – giant turkey legs and candy apples – seem to be ubiquitous at both Universal and Disney.

Generally speaking, I would say item-for-item and store-for-store, Universal has pulled far away from the generic “Disney Parks” stuff  we have seen over at Walt Disney World. However, one area Disney reigns supreme in is in the area of themed popcorn buckets. For the most part, the only really good popcorn bucket Universal has made in the last decade plus was for the Minions. Thankfully it has recently come back into stock.

The game was changed just in the past month though, as Universal released two more Minion-themed popcorn buckets they are at the quality we see in the very best Disney popcorn buckets.

The details in the new Minions popcorn buckets are just incredible.

There are little touches in theme park merchandise that take items to the next level for me. For the most part, these bits of TLC are reserved for the big boys like Pandora: The World of Avatar, Star Wars: Galaxy’s Edge, or the Wizarding World of Harry Potter, but the new Minion popcorn bucket has a Despicable Me: Minion Mayhem logo printed on the bottom. There is really no reason for this, other than for collectors, and it’s appreciated.

Before we go, let’s check out some more of the amazing details on this Minions popcorn bucket. On one side there is a bunch of travel stickers from the road trip the Minions have been on. We see logos from Universal Studios, and even Super Silly Fun Land (which we covered in our look at Universal Studios Hollywood.) One of the stickers prominently features the logo for Villain-Con, which was featured in the first Minions movie.

Over the last couple months, Universal has closed two properties which have been at USF for a long time. Back in January, they closed the door on Shrek-4D. Universal did not announce what would be replacing Shrek in the park. It’s worth noting that Shrek was located directly across from Despicable Me: Minion Mayhem. When construction walls went up around the Shrek show building, they were filled with Minion graphics.

The Permit Princess Alicia Stella over at Orlando Park Stop has reported that “rumors and innuendo” suggest that Shrek’s replacement will be none other than a Minion-themed attraction built around Villain-Con. You can read more about this rumor by CLICKING HERE.

In news that came out of nowhere in May, the Universal Studios Classic Monsters Cafe quick service restaurant was permanently closed. Monster’s Cafe was located directly next to Shrek 4-D. The construction walls in front of it also displayed Minions. Universal Studios Hollywood already has a Minions-themed restaurant, and while Universal Orlando hasn’t announced what is replacing Monsters’s Cafe, it doesn’t take a Magic 8 Ball to see the natural synergy of a kid friendly restaurant directly next to two Minion-themed attractions in the park.

There have been some fun graphics put on construction walls at Universal over the last several years, including the raptor ones when VelociCoaster was being built over in Jurassic Park, but the below graphic featuring the Minions paying homage to the iconic “lunch atop a skyscraper” photo is probably the best ever graphic in theme park construction wall history.

The graphics essentially work as fun photo-ops for the guests.

Despicable Me: Minion Mayhem can draw some pretty large lines throughout the day at Universal Studios Florida. Many will attribute that to the attraction being one of the first things you encounter when walking into the park. That’s definitely part of the equation, but I think something not talked about nearly as much is that Minion Mayhem is one of Universal’s most underrated attractions. It has a great pre-show followed by an experience that is super fun but also has that Disney level of “heart” attached at the end, something you rarely see outside of Disney.

First let’s check out the façade, which is designed as though guests are walking into Gru’s house.

The propaganda-style posters that surround the show building are just incredible. One element of the story for Minion Mayhem involves us, the guests, being turned into Minions to work for Gru.

There are several fun “little touches” around the area to look for.

The outdoor section of the queue shows a recap of the first Despicable Me movie along with details on why it is so great being a Minion. Once inside the show building, we have things from Gru’s house taken straight out of the movie.

One of my favorite things in ANY theme park attraction is the lion head that is mounted on the wall. This lion is in the process of eating a dog. The dog has a cat in it’s mouth. The cat has a mouse in it’s mouth. Just INCREDIBLE.

Like the movie, the Minions and Gru need to make the home of an evil mastermind into one of that is kid-friendly, so you see wonderful details like a suit of armor being used as a planter.

The idea of an Iron Maiden being outfitted with tennis balls to make it safer is next level hilarious.

In general, at 450 sq feet and up, the guest rooms at Portofino Bay are even larger than your average room at a Disney Deluxe Resort. Many rooms have an outstanding view of the harbor, and a few have balconies. But we’re here to talk about THE room. As a family who loves Disney’s Art of Animation Resort, we look forward to staying in elaborately themed suites.

One of the only negatives we have with the Lion King, Cars, and Finding Nemo suites at AOA is that the master bedroom – where the adults sleep – is separated from the rest of the room, giving kids access to the hotel door. Universal’s kid’s suites are the complete opposite, with the adult bedroom having the only access to the room’s entrance. The door to the kid’s area only opens into the adult’s room. The adult’s bedroom is gorgeous, with a king size bed, a love seat, a sitting area, and a bathroom that may be larger than my first apartment. “Look at all this floor space. So many activities!” 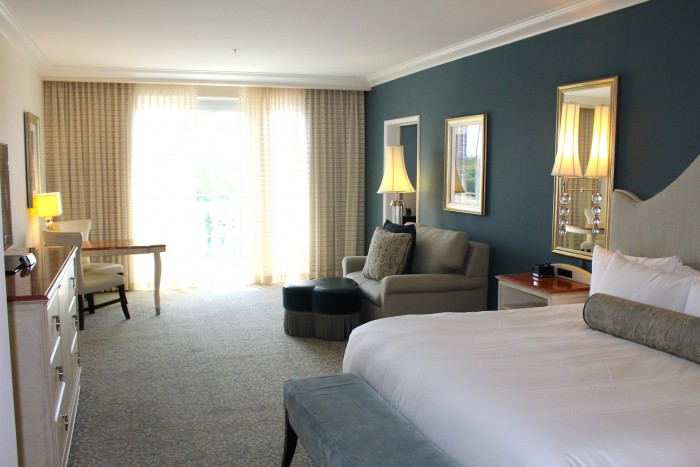 The door to the children’s area is themed so well that the kids loved slamming the door and pretending they were Gru from Despicable Me. There is even a spinning wheel like you would see on some old timey bank vault. Opening the door to the kid’s room is like when Dorothy traveled to Oz and her world went from black-and-white to color, and when we opened the door, the pictures just do not prepare you for how large everything is. The bomb beds are much bigger than a regular twin, and the kids loved playing in, around, and on top of them. Gru’s scarf as an accent on the bed was a great touch, with the chair and lighting fixtures in the room seemingly straight from the movie. You know you’ve hit a home run when the kids need to say goodbye to the room when we checked out and add, “we love you.” 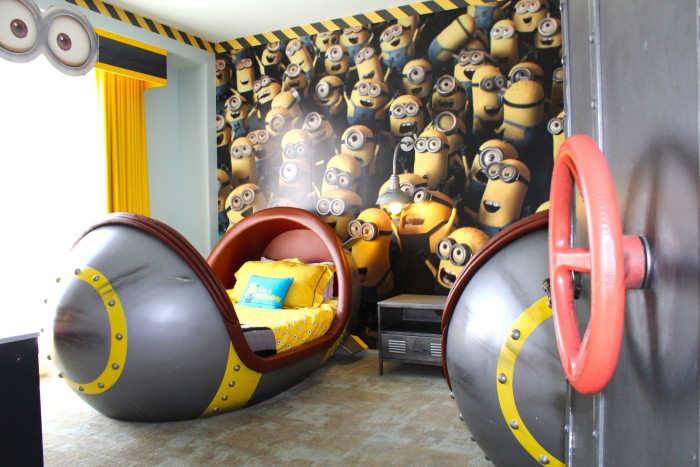 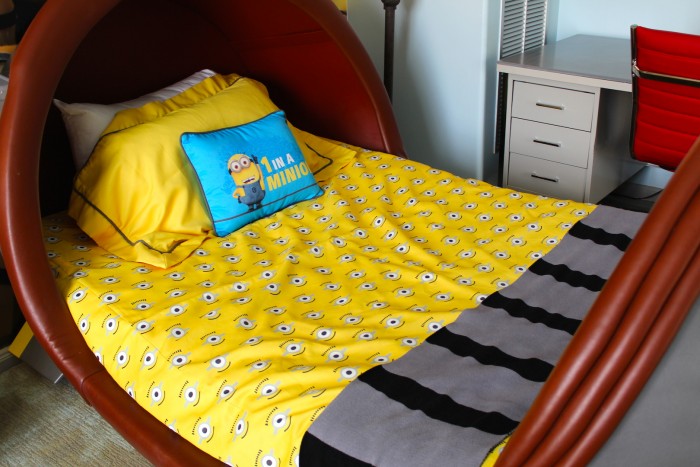 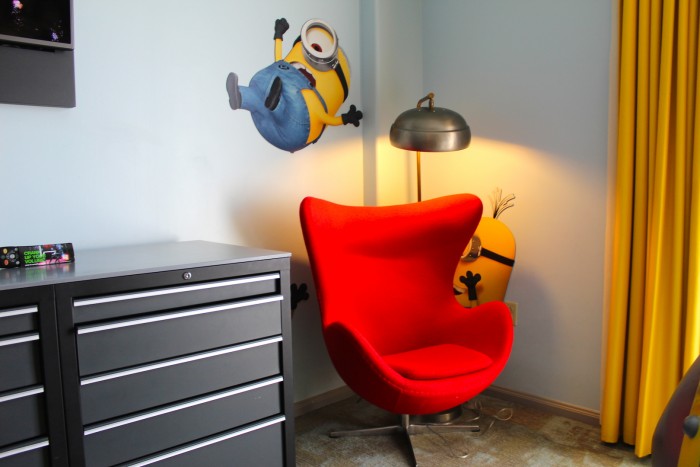 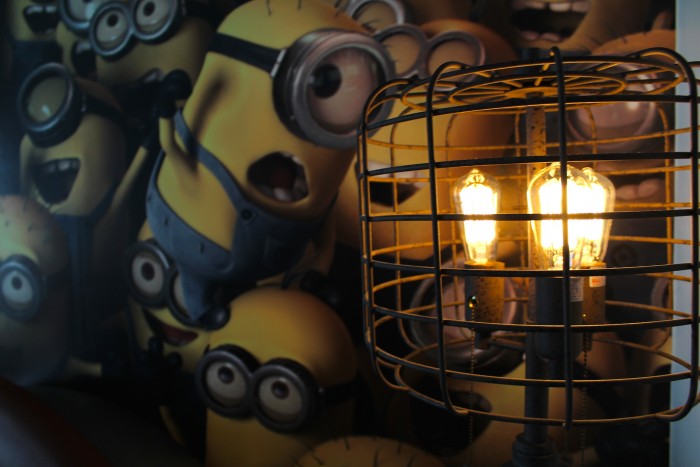 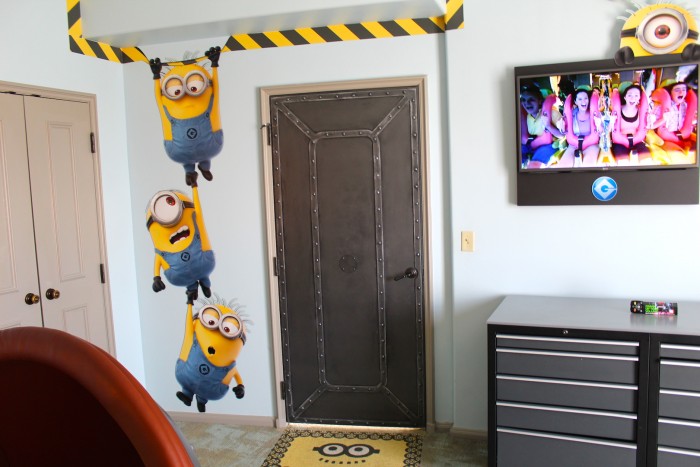 Next to the outdoor queue of Minion Mayhem is some interesting landscaping that includes…BANANA TREES. This is a detail many guests won’t notice, but it is absolutely perfect.

So there you have it: The SATURDAY SIX Looks at MINIONS at the Universal Orlando Resort! See you next weekend for the latest installment of the SATURDAY SIX, where we’ll look at something fun from the world of Disney and Universal. If you enjoyed yourself, be sure to check out the THEME PARK ENJOYMENT INDEX, giving a monthly recap of all the theme park news you need to know (and a lot more you don’t need to know, but we’re gonna tell you anyway). You can also follow Your Humble Author on Twitter (@derekburgan).