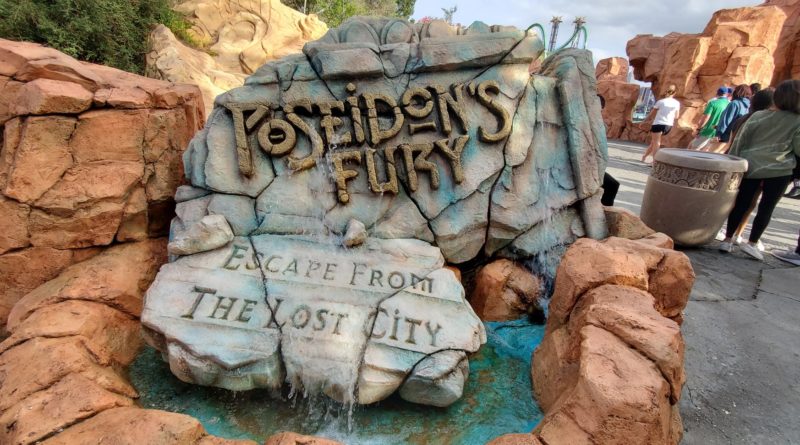 This week’s SATURDAY SIX takes a stroll through the Universal Orlando Resort to see what’s new! The month of March has been a Tale of Two Cities when it comes to Florida’s largest theme park resorts. Over at Disney, the company has been rocked by one major news story after another, all painting the company in a bad light. We’ll cover the details at the end of the month in the Theme Park Enjoyment Index, but if you could sum Disney’s month up in a phrase it would be “not great, Bob.” Meanwhile across town, the Universal Orlando Resort has been chugging along and – all things considered – has had a pretty amazing past week or so. Let’s check out some of the highlights, starting with…

Long time readers of this fine blog series know how much we love our pressed pennies. A new machine showed up in Jurassic Park recently, located at the Jurassic Outfitters gift shop.

Like many of the newer pressed penny machines, there is no need to bring your own coins as the machine itself provides the penny. Interestingly enough, all of the designs are branded Jurassic World, including a penny with the Jurassic World logo. Previously there was a machine in the gift shop which featured 3 designs, one of which was the famous Jurassic Park logo. That machine has been removed. On June 10th, the latest Jurassic World movie will be released and I’m wondering if we are going to see a transition from Jurassic Park at Islands of Adventure to Jurassic World.

Recently a new prize was added to the Jurassic Park skill games that is hopefully a sign of bigger things to come. A pillow featuring the popular Mr. DNA character has arrived.

Bonus points for the Jurassic World logo on the back of the pillow.

Double bonus points for the tag also having a Jurassic World logo. This is an attention to detail you don’t see that often in the theme park world and is generally reserved for the more prestige brands like the Wizarding World of Harry Potter, Pandora: The World of Avatar, or Star Wars: Galaxy’s Edge.

Meanwhile, over in Springfield USA, theme park’s best skill games area got even better with the addition of some new prizes, including a Bartman pillow.

There was also a new pillow featuring The Simpsons family, including Homer in an absolutely incredible pose. I think that’s the exact face Len Testa makes five minutes before SAT 6 is scheduled to go up each week.

One of my all time favorite skill game prizes came back in stock. These Groundkeeper Willie plush may seem odd out of context, however…

…they are based on the Groundskeeper Willies that you knock down with a baseball in his skill game. That is just AWESOME.

The Marvel Superhero Adventures Hulk toy also came out recently, but features some rather odd proportions including a head that’s way too big and a waist that’s way too small.

The picture of the Hulk on the top of the box seems like a completely different Hulk than the toy. Crazy.

The Wizarding World got some new items as well, including some new shirts. Love the Hog’s Head shirt.

The latest film in the Fantastic Beasts series comes out this time next month, so most likely we’ll be seeing a lot of new merchandise supporting that in the near future.

For those of you weirdoes perfectly sane people who enjoy Metal Earth kits, a new one featuring Hagrid’s Motorbike came out. I will say this, the packaging on the WWoHP Metal Earth kits is fantastic.

# 4 – Greatest Idea EVER in CityWalk

CityWalk is home to some of my favorite restaurants in Florida, and earlier in March – out of nowhere – an outdoor kitchen opened up featuring items from Cowfish, Antojitos, and Pat O’Brien’s.  To me, this was an incredible idea. A chance to sample something from three great sit down restaurants without having to invest the time or money into a full meal there.

The kitchen was located directly near a Bel Air photo op in the main hub of CityWalk.

Here is the menu.

There were tables set up nearby to eat your food.

The kitchen had display items showing what you could order.

Nobody is better at the nacho game than Universal Orlando. No one.

One of the most underrated attraction finally reopened this past week with Poseidon’s Fury in Islands of Adventure. Poseidon’s Fury has been closed since last August, and once the walls came down the new paint job made the entire area really pop.

Love this shot at Poseidon’s Fury which shows the nearby VelociCoaster in action.

If you’ve been a regular reader of the SATURDAY SIX for the past several months, you’ve read my theory on Universal hiring away someone from EPCOT’s food festivals. I don’t know who this person is, but the monumental leap that Universal has taken in outdoor food kiosks in the last year – going from a complete afterthought to rivaling the quality we see at Food & Wine – tells me that they know what they are doing. My theory got bolstered this past week as Universal started offering an appetizer tray.  I’ve seen these for years at the Food & Wine and Flower & Garden festivals (and then not long after I saw them for 99 cents at the Disney Outlet Stores), but this is something I’ve never seen at Universal before.

One thing we found out pretty fast is that not all the cups sold at the Mardi Gras kitchens in Universal Studios Florida fit the tray very well.

However, when we went back a different day and tried one of the newer color changing Mardi Gras cups, it fit into the tray perfectly.

Personally speaking, at 99 cents, these trays are great. For $10 it is hard to justify and before the week of their debut was over the price was reduced down to $7.

Well technically a “bar,” Pat O’Brien’s is family friendly and fun for all ages. Especially if going during dinner hours of 5-7PM.

We are SO CLOSE to entering the Mardi Gras Tribute Store…

You may remember last week I wrote about the trials and tribulations of getting a SAT SIX on the Mardi Gras Tribute Store onto the schedule. This week I thought “screw it, I’m just putting it in at the very end.” But then a funny thing happened, I had about a dozen or so photos loaded into this very article and thought to myself, “no way. This stuff is too good to toss in as an afterthought!” I deleted most of the photos and NO MATTER WHAT we will have a dedicated Mardi Gras Tribute Store article in April. The store is incredible and the pictures from great photographers like @bioreconstruct, Hunter Underwood, and Hedgehog’s Corner needed to be seen in their full glory, and you know what, maybe there was a sign above this week that it was destined to be delayed because this very week Universal put on the large “MARDI GRAS” logo on the Tribute Store’s front door (which you can see below.) If I had done the article any time before this the door would have been blank.

So there you have it: The SATURDAY SIX Takes a Stroll Through the Universal Orlando Resort! See you next weekend for the latest installment of the SATURDAY SIX, where we’ll look at something fun from the world of Disney and Universal. If you enjoyed yourself, be sure to check out the THEME PARK ENJOYMENT INDEX, giving a monthly recap of all the theme park news you need to know (and a lot more you don’t need to know, but we’re gonna tell you anyway). You can also follow Your Humble Author on Twitter (@derekburgan).

The SATURDAY SIX Celebrates the Grand Opening of the VELOCICOASTER 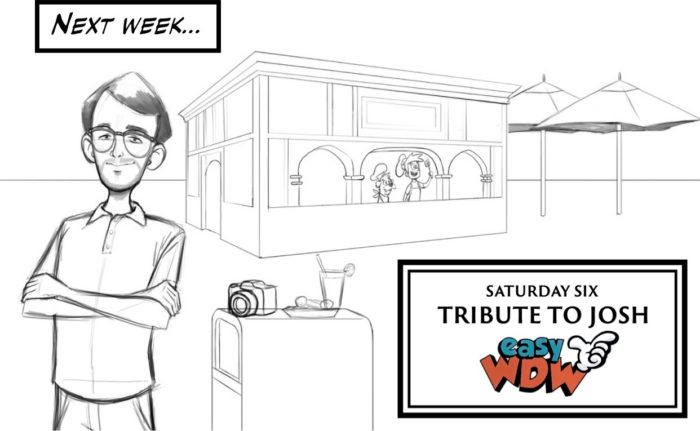