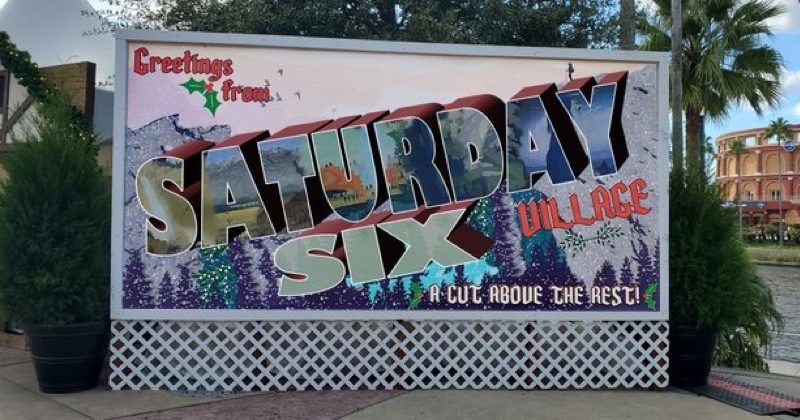 This week’s SATURDAY SIX takes a look at Universal Orlando’s Christmas Celebration! Universal gets a lot of praise for what it does during Halloween – and rightfully so considering HHN is now the world’s premier haunt experience – but I would argue its Christmas season is almost criminally underrated by theme park fans. Universal goes above and beyond each holiday season, and despite every obstacle in the world thrown at them over the last twelve months, this year’s event is the best yet. Let’s take a look at look at why, starting with…

Earlier this year we made a compelling argument for why Cabana Bay Beach Resort is the greatest Value Resort of all time (and in my opinion, it’s not even close). Well, somehow the best got even better as this year The Bae debuted a new Holiday Beer Crawl! Here’s how it works:

Buy each of the holiday beers from the 4 Cabana Bay bars across property, and get one beer of your choice for free. Your redemption beer can be any beer offered, not just one of the 4 holiday beers. Your Holiday Beer Crawl card is punched by the bartender, and then you use the card to redeem the free beer.

PRO TIP: If you plan on doing this, make sure you pay attention to the venue operating times, specifically Atomic Tonic as they are closed Mondays, Tuesdays, and Wednesdays. Also, Galaxy Bowl doesn’t open until the late afternoon for bar service.

If you are more of a liquor connoisseur, be sure to check out the seasonal offerings available. How can you not love a drink called “YIPPIE PIE YAY”?!

I have no insight into the behind-the-scenes goings-on at Universal Orlando, but I have a gut feeling the resort hired someone away from Disney that had something to do with EPCOT’s Food and Wine. Why? Because food kiosks and outdoor kitchens at the resort have taken a lightyear jump in quality at Universal in just one year. Actually, even crazier to think this person could have just been let go by Disney along with the other 28,000 furloughed Cast Members and has now created a new revenue stream for Universal that pretty much didn’t exist outside of pop-up bars selling beer and pizza slices.

Whatever the case, not only have the food booths at events like Halloween Horror Nights become remarkably better, this year brought the introduction of Mistletoe Pines Village in CityWalk.

The signage throughout Mistletoe Pines is INCREDIBLE.

These travel posters are so well designed they should be available as prints for guests to buy. Just gorgeous work.

There are several photo-ops in the area as well.

The Tribute Store in Universal Studios Florida has consistently become so good for every Universal event this year (including Mardi Gras and HHN 30) that I think we have become spoiled by its excellence and take it for granted. The store – located across from the giant USF Christmas tree and next to Revenge of the Mummy – is another incredible achievement in design. Recently I had a visit to EPCOT to ride Remy’s Ratatouille Adventure and spent some time in their Creations Shop (after discovering that the entire France Pavilion in World Showcase doesn’t sell any Remy merchandise, which blew my mind). The store is perfectly fine, but walking through it I couldn’t help but think “it took Disney how long to build this?!” Meanwhile the Tribute Stores at Universal seem to pop up almost overnight and – to me as a guest – appear to have a million times more thought and care put into them.

Concept designer Mike Artwell posted some behind-the-scenes photos of how the charming facade of this year’s Tribute Store was created. As a person who just wrote the 2021 TURKEY ADDENDUM -showing the “A to B” process of how an elaborate drawing for the SATURDAY SIX was created – I’m definitely interested in how things are designed from a creative standpoint.  First, let’s check out the final product and we’ll see how we got there…

Once inside the Tribute Store, there are wonderful design elements everywhere, including this look into Santa’s office.

Every time you see a cork board in a Universal Tribute Store, it’s sure to be filled with fun references and jokes.

Christmas and model trains go together like peanut butter and chocolate, but this year’s Tribute Store features a train pushing a DeLorean car in a moment referencing Back to the Future 3. This may be the single coolest thing ever featured in a theme park gift shop in history.

One thing Universal has done this year is allow guests to be a part of the Tribute Store experience. For HHN, they basically photo-shopped a guest into a design and hung them on the walls. For the holiday season, adult guests could have a caricature of themselves be featured on “Earl’s Wall O’ Fame.”

Of course there’s a also a metric-ton of Earl the Squirrel related merchandise. T-shirts, hats, plush, etc. In my opinion, you can’t have enough items featuring this little guy. Where Disney has Figment, Universal now has their parks-created character that everyone loves.

One tradition of the Tribute Store seems to be the inclusion of a vegan brownie. These always taste great.

Right before press time, Universal dropped a bombshell by introducing the Earl the Squirrel walkaround character. If you don’t know the story behind the creation of Earl the Squirrel, check out this article. As guests, over the years we have seen fun tributes to Earl in the giant USF Christmas tree progress to Earl-themed merchandise, and now we have a full blown walkaround character to take photos with. I feel like it’s beating a dead horse at times, but it is such a stark difference in how Universal is treating their theme parks compared to Disney down the street (where I guess we’re supposed to be excited that they are finally bringing trams back?). Just for one park though, the other parks will get them “sometime” next year. WHAAAAAT? Remember I mentioned going to EPCOT recently to ride Remy? Well it was raining that whole day so you can imagine how fun that walk back to the car was.) Anyway, here is Earl is all his glory:

For our family, watching the Macy’s Thanksgiving Day Parade on TV every year is the official start of the Christmas season. Universal has its own version with the Holiday Parade Featuring Macy’s in Universal Studios Florida. Not only are there the large balloons that are synonymous with the Macy’s parade in New York, but you’ll also see elaborate floats and tons of Team Members and characters walking the route as well. It’s a blast.

To quote pro-wrestling legend Pat Patterson, Seuss Landing goes “banana” for Christmas. The entire area is over-the-top decorated and you’ll even see citizens of Whoville roaming around the park interacting with guests.

However, my favorite part of Grinchmas is the Grinchmas Who-liday Spectacular show which – in my mind – is THE best show at any theme park. Essentially it is the retelling of the live action How the Grinch Stole Christmas movie (starring Jim Carrey), but done in the amount of time it takes to watch the animated How the Grinch Stole Christmas. In previous years the show took place in a Universal soundstage right outside of Seuss Landing, but this year the show is being held in the Blue Man Group theater. This makes a great experience even better because the actual seating at the Blue Man Group theater is fantastic and there’s not a bad view in the house.

Similar to the live action movie, the main focus of the show is The Grinch and Cindy Lou Who, and every year the Cast Members playing these roles crush it.

There are a whole bunch of new snack items found in Seuss Landing during the holidays, including the Grinch sugar cookie.

Even the unwavering Zaxs at the Zax Bypass are dressed in their Christmas best.

Speaking of How The Grinch Stole Christmas, one element of that story that strikes a chord with many is the “Roast Beast” served at the annual Who-ville Christmas dinner. Well, this year Universal created the Roast Beast sandwich and it is BONKERS in the greatest way possible. It is available in the Circus McGurkis quick service restaurant and is well worth going out of your way to try.

The sandwich is topped with A SECOND MINI-SANDWICH.

From the onsite hotels to the parks, everywhere you go at Universal will have you in the holiday spirit.

It’s the most wonderful time of the year….

Last year Universal introduced the Holiday Tree Hunt and it came back for 2021. Here’s how it works: similar to the scavenger hunts like Scarecrow Stalk at HHN,  Figment’s Brush with the Masters during Festival of the Arts, or Spike’s Pollen-Nation Exploration during Flower & Garden, guests purchase a Holiday Tree Hunt map ($10). The map includes the locations of all the themed trees at locations inside the parks and at Universal CityWalk. At each location your map get can a stamp, when you’ve completed your map you can redeem it for a special ornament. There are a lot of trees throughout the resort, and for the most part they are much better decorated than the ones we saw at Disney Springs for their tree trail. Keep in mind that Universal will give you the ornament redemption prize even if you haven’t received every stamp. This way you can collect the stamps at your leisure and not have to stress about “getting them all” before the park closes or your vacation ends.

Here are some of my personal favorite trees, including the best to date that features references to many classic Universal Studios Florida atttractions.

So there you have it: The SATURDAY SIX Experiences CHRISTMAS at the Universal Orlando Resort! See you next weekend for the latest installment of the SATURDAY SIX, where we’ll look at something fun from the world of Disney and Universal. If you enjoyed yourself, be sure to check out the THEME PARK ENJOYMENT INDEX, giving a monthly recap of all the theme park news you need to know (and a lot more you don’t need to know, but we’re gonna tell you anyway). You can also follow Your Humble Author on Twitter (@derekburgan).

The SATURDAY SIX Looks at Christmas Through the Magic of MOVIES

Six Pieces of Disney Merchandise That Doesn’t Exist (but Totally Should!)