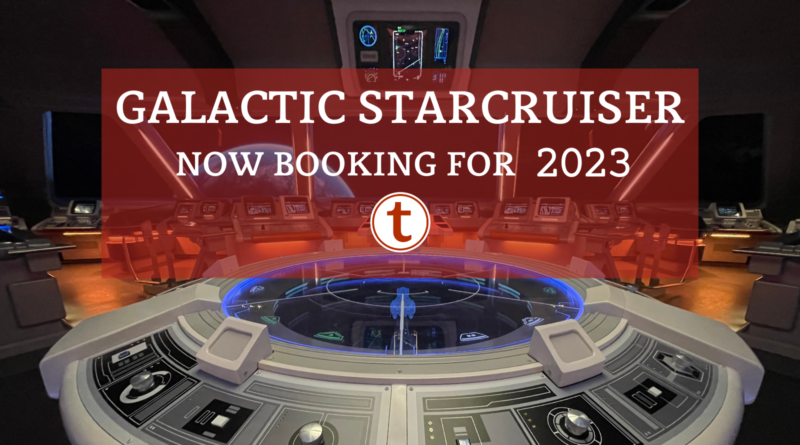 New on-sale dates have been released for Walt Disney World’s Star Wars: Galactic Starcruiser. Here’s when members of special groups and the general public can start booking, for travel dates between January 1 and September 30, 2023:

September 1 Open to the general public

These two-night role-playing experiences on the Galactic Starcruiser are expensive, starting at around $5,000 for two people.  But with that cost comes the chance to make your own, personal Star Wars story that you’ll have for the rest of your life.  There’s nothing else like it.

Here’s what our own Len Testa had to say after his trip:

I’ve covered theme parks for more than twenty years, and Starcruiser is so far beyond the current state of the art in themed entertainment that it deserves its own category: Starcruiser-like hotel experiences. It surely belongs on the short list of Disney “firsts.”

The Galactic Starcruiser is best experienced by fully committing to the idea that you’re part of the Star Wars universe: you have to believe that The Force is real, that the events in the Star Wars films actually happened, and that you’re living in that universe.  Because you’ll be talking with actors on the Starcruiser, it helps to create a short “backstory” that explains who you are in the Star Wars universe.  Your story doesn’t have to be complicated – friends of ours said they were used landspeeder salesman, and that got a bunch of laughs from the crew.

If you’re fans of the Disney Dish podcast, hosts Jim Hill and Len Testa will be on the March 30, 2023 voyage, with Len reprising his role as Hank Lonely.

Our TouringPlans travel agents are ready and waiting to book your Star Wars: Galactic Starcruiser vacation. Click here to get a quote.