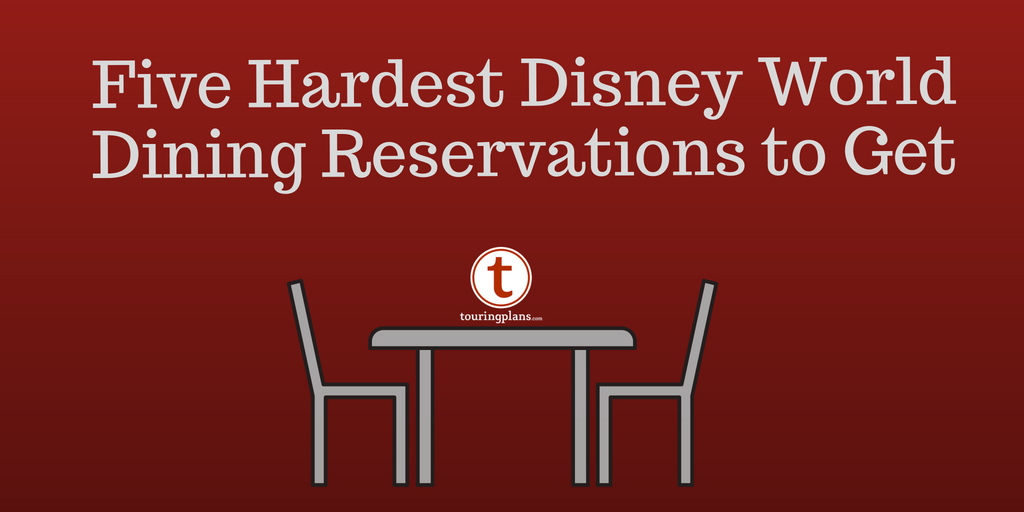 Italy’s Via Napoli is my daughter’s favorite place to eat in all of Walt Disney World because of two things: (1) the Mezzo Metro is roughly four square feet of pizza; and (2) she says the waitstaff are “beautiful and kind.”

Disney says that the keys to Via Napoli’s pizza, arguably the best in Walt Disney World, are the flour imported from Italy and the water that’s sourced to match that found in Naples, Italy. Another thing that helps is that their pizza oven can reach temperatures of 800ºF, which crisps the crust in a way that most household ovens can’t even dream of.

TouringPlans users have an 85.4% success rate for getting dinner reservations at Via Napoli. They give Via Napoli’s food a “thumbs-up” rating about 89% of the time, which is slightly better than average.

#4 Dinner at T-Rex in Disney Springs

This wouldn’t be my first choice for dinner at Disney Springs. It’s insanely loud, mainly from the roar of the dinosaurs all around you. And honestly, those dinosaurs are the draw for most families, not the food.

T-Rex’s menu is geared to kids, with Jurassic Chicken Tidbits (nuggets) and Lava Lasagna. The portion sizes are massive – one dinner I had here was the most food I’ve ever eaten in a single meal, so you’re defintely going to leave full. Also, the service is prompt and cheerful, which helps a lot.

T-Rex’s menu is huge, which probably means it’s not making very much food – if any – from scratch. The best thing on the menu is probably the Chocolate Extinction dessert, with chocolate fudge cake, ice cream, whipped cream, caramel sauce, and Butterfinger crumbs, served alongside dry ice for a fog effect.

TouringPlans users have an 84.3% success rate getting dinner reservations at T-Rex. Members of Landry’s Select Club get priority seating at T-Rex, so that’s an option if you can’t get reservations. TouringPlans users give a thumbs-up to T-Rex’s food around 81% of the time, which is much below average for Walt Disney World restaurants.

The benefit of Art Smith’s relatively small menu – around 7 entrées mixed and matched – is that the kitchen can master all of them. Start with the Bunch of Puppies – house-made hushpuppies so light that you’ll wonder why everyone else has been doing them wrong all these years – and the Jasper Board, a charcuterie sampler with meats, cheeses, fish dip, and addictive candied pecans.

True story: I once spent two years working on a recipe for making fried chicken at home with a crispy, light crust. And it was good – I liked my version better than a lot of restaurants’ versions. Then I tried Art Smith’s and almost cried. There are a couple of things I’ve accepted as an adult: I probably won’t get drafted into the NBA, and I’m never going to make a fried chicken as good as Art Smith.

The good news is that Art serves some of the best drinks in Disney Springs, so I didn’t have to feel bad for very long. When it comes to desserts, there are two choices: the Hummingbird Cake, pineapple-banana cake with cream cheese frosting, served with a scoop of ice cream; and Shine Cake, frosted vanilla poundcake soaked in alcohol syrup. My advice here is to reject false choices like having to pick one dessert or the other, and get both.

TouringPlans users have reported a 75% success rate in getting dinner reservations at Art Smith’s Homecomin’. They also rate Homecomin’ as one of the best restaurants in Walt Disney World, with a 92% thumbs-up score.

I ate at this buffet restaurant last month, scheduling a reservation for the end of breakfast and the beginning of lunch. The food is good for a buffet – I’m not sure what they put in those Mickey-shaped waffles, but I could’ve eaten ten of them. Other highlights of the Chef Mickey’s menu are the smoked salmon, and the cheesy potato casserole, both on the breakfast buffet.

The reason you go to Chef Mickey’s is to meet characters. And you get plenty of chances, because Disney has this down like clockwork. Within the span of about 45 minutes we saw Mickey, Minnie, Pluto, Goofy, and Donald, who posed for photos and signed autographs while they weren’t whipping up pancakes in the kitchen.

Service at Chef Mickey’s is excellent – I think most of those servers have been around for many years. TouringPlans users have reported a 70% success rate in getting lunch reservations at Chef Mickey’s, while giving Chef Mickey’s an 85% thumbs-up score, slightly lower than average.

#1 Dinner at The Plaza Restaurant in the Magic Kingdom

TouringPlans users give The Plaza an 87% thumbs-up rating, about average for all Walt Disney World restaurants.

And that’s your list. You’re probably wondering where the Magic Kingdom’s Be Our Guest ended up on this list. Dinner is the hardest reservation to get at Be Our Guest, with a success rate of just under 91%. If that sounds surprising, remember that Be Our Guest is huge, so it fits a lot of people. Be Our Guest is also getting more expensive, and that helps keep demand down a bit.