Do you want to go back to the future? Well, we’re already in 2015, so Doc Brown’s time machine is off the table, but Disney is now giving guests a glimpse of the world (or at least the moview) of tomorrow. As Rikki Niblett reported, Walt Disney World’s Tomorrowland preview officially opened on April 18 inside Epcot‘s Magic Eye Theater, formerly home to Captain EO. 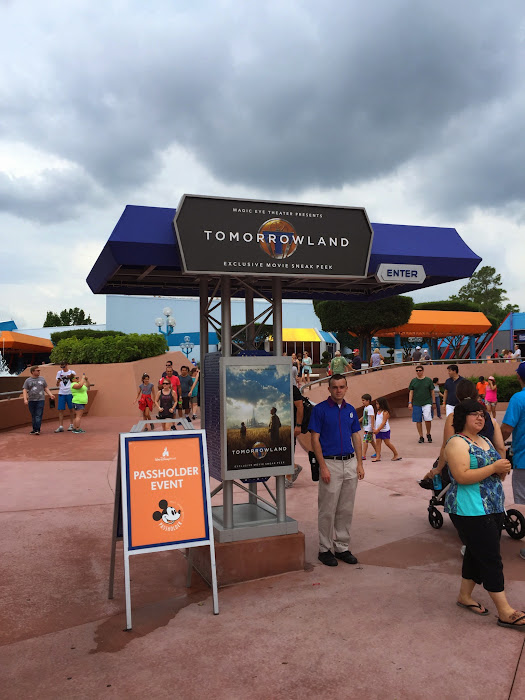 The new temporary attraction is essentially an advertisement for the upcoming Brad Bird-directed sci-fi flick, which will be released to American theaters on May 22. 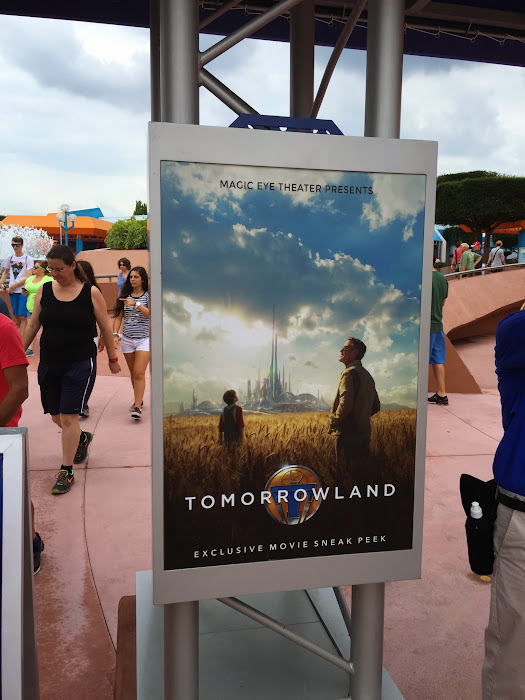 Posters and artwork from the film now adorn the entryway to the Imagination Pavilion’s theater. 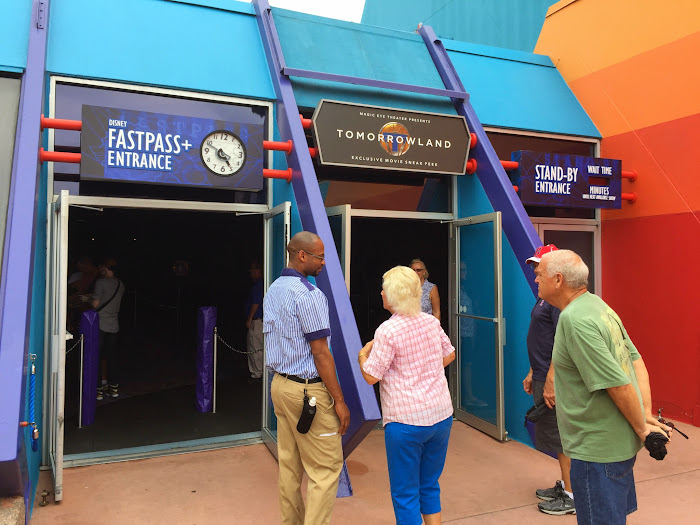 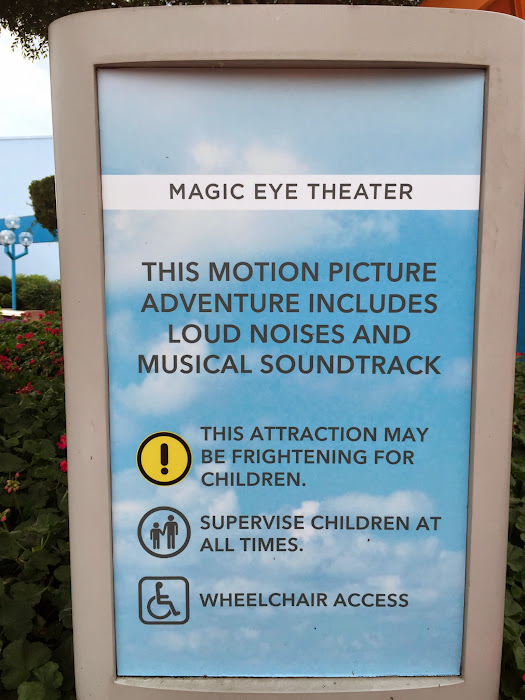 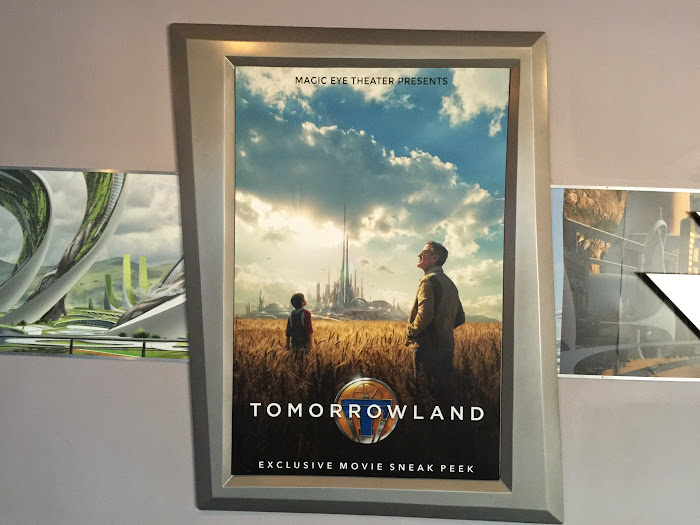 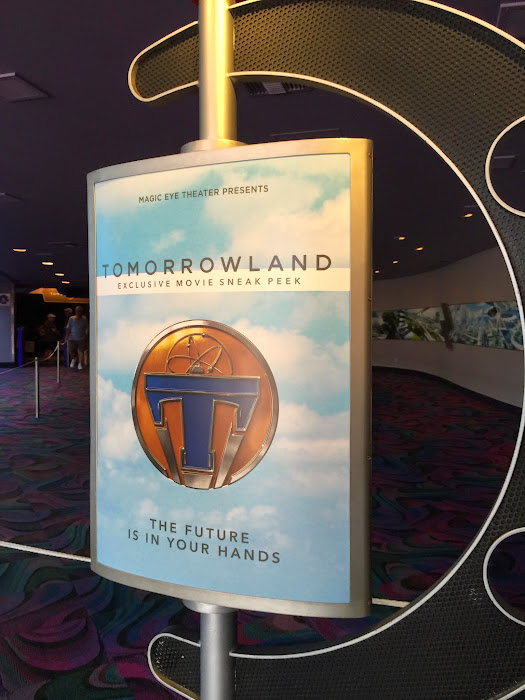 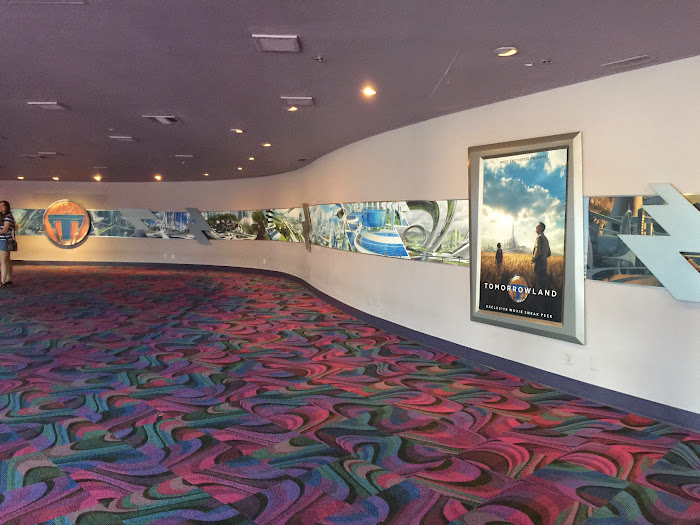 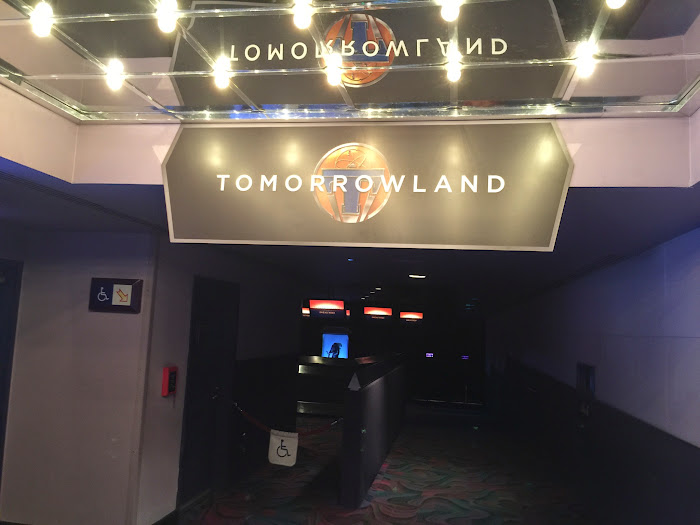 On April 17, Annual Passholders got a preview of the preview, including free collectible pins for all who attended. 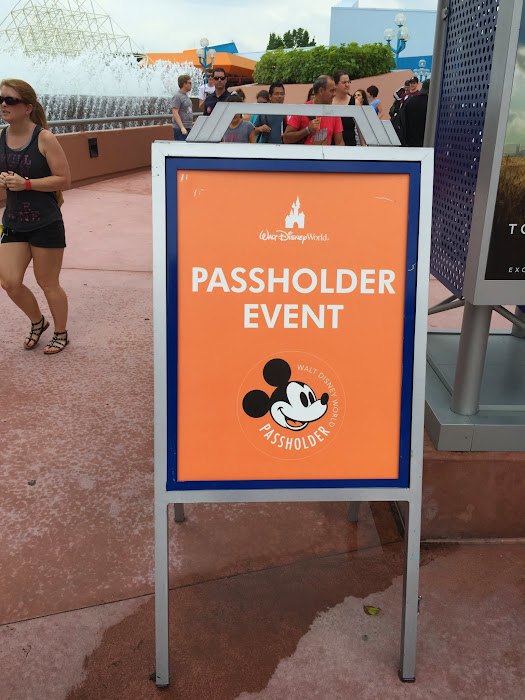 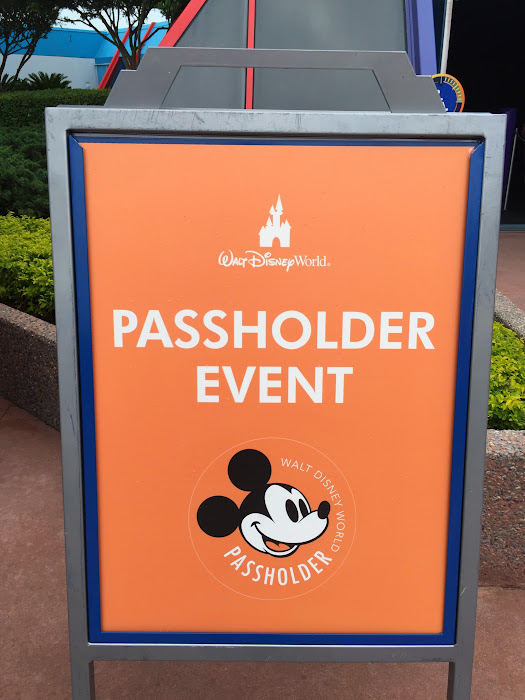 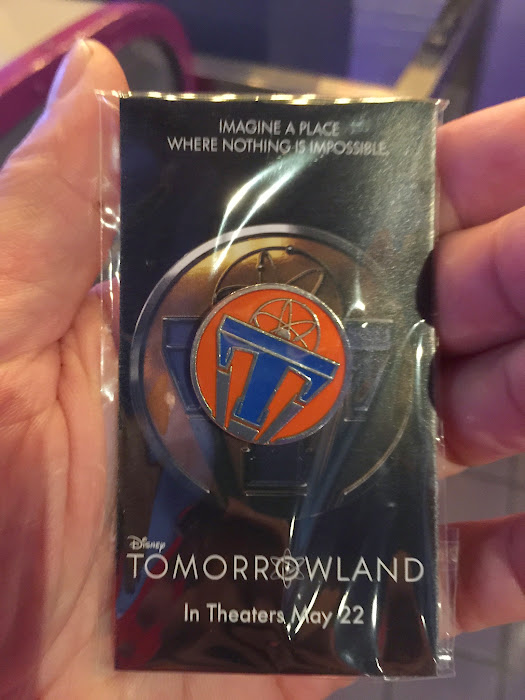 The preshow area features a case containing a jetpack, the only screen-used prop displayed in Epcot’s exhibit. 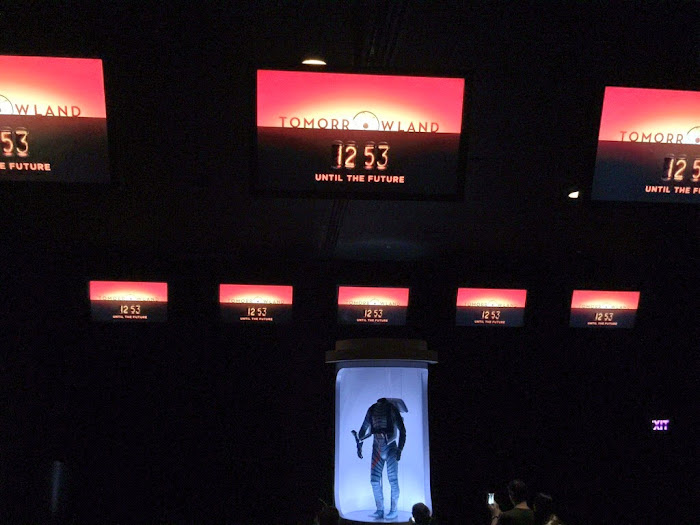 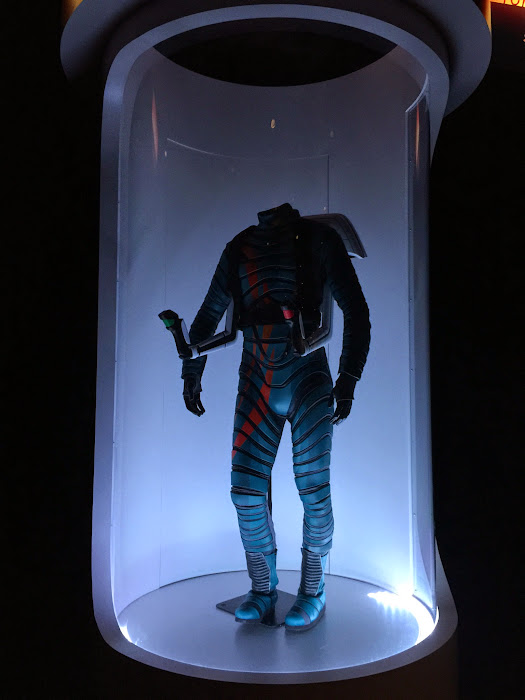 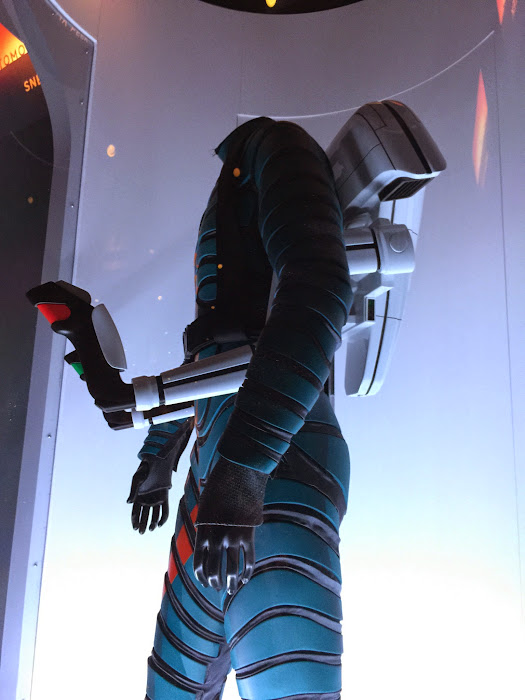 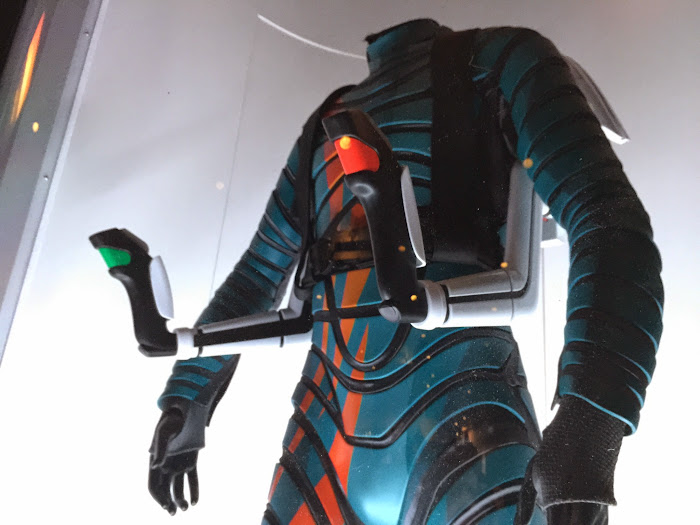 While waiting for the show to start, guests listen to occasional audio clips (presumably of the film’s director and/or writer) discussing the movie’s themes. The dialogue is interesting, but it’s odd that there was no accompanying video on the overhead screens.

The Tomorrowland preview is screened inside the Magic Eye Theater, which has not been visibly modified since Captain EO’s closure. The preview is about 15 minutes long, and is not in 3-D (nor is the feature film, though it is being released in IMAX). 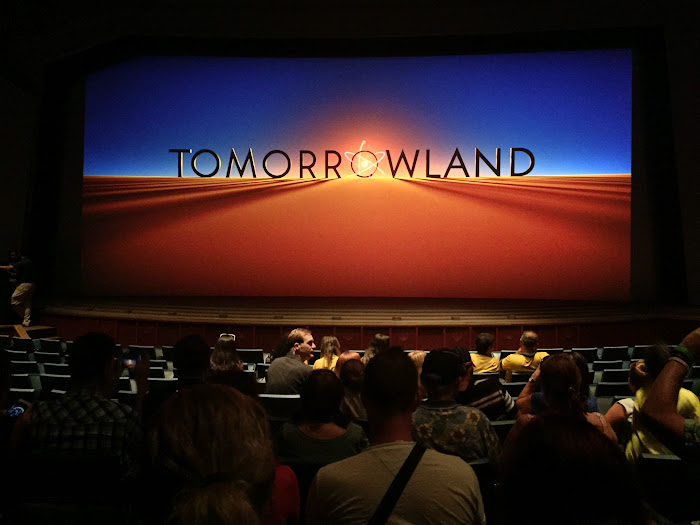 In-theater lighting effects are used sporadically throughout the Tomorrowland preview. With the exception of one effective “spotlight” moment, I found them more distracting than immersive. Wind effects are put to good use, and the sound system’s subwoofer gets a good workout.

During my afternoon screening, there were no moving seat effects in use at Epcot’s Tomorrowland preview. However, others have reported that movement was used during a few moments during morning screenings.

The preview presents a substantial sequence from what seems to be near the start of the film. It stars Thomas Robinson as young Frank Welker (the child version of the character played by George Clooney) at the 1964 World’s Fair. Most notably for Disney fans, it features the attraction it’s a small world; filming was done at Disneyland, with props and CGI to recreate how the ride look as it appeared at the World’s Fair.

It turns out that there’s more to Mary Blair’s droning dolls than meets the eye, as Frank finds himself transported to futuristic world that’s styled suspiciously like 1970’s era Space Mountain. An ancestor of the jetpack displayed in the lobby leads to a high-flying action scene, which finishes of the Tomorrowland preview on a high note.

The preview concludes with a collection of clips from the rest of the film, including many already familiar from the previously released Tomorrowland trailer. On the whole, the preview increased my anticipation for the film (which was already moderately high) and provided an air-conditioned respite for a few minutes. I wouldn’t necessarily see it a second time, but it’s probably a better way to kill time than the mediocre dark ride that shares its pavilion.

Incidentally, while the same preview is also being presented at Disneyland’s Magic Eye Theater (which is actually in Tomorrowland, appropriately enough), on the west coast they also have a full exhibit of props and artwork installed inside the nearby Starcade.

Epcot’s Tomorrowland preview is expected to run through the film’s May 22 premiere. Disney officially insists that Captain EO will return some time after that, but I’m not holding my breath for the King of Pop’s second posthumous comeback.