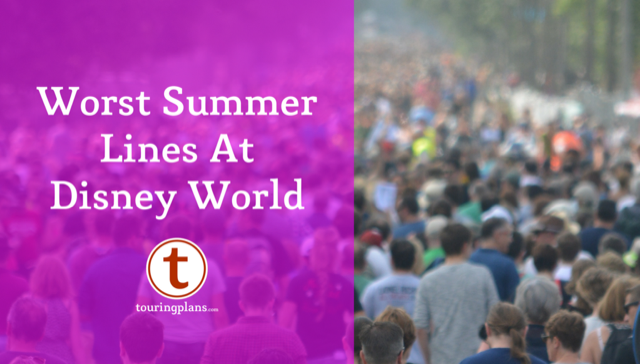 Here at TouringPlans.com, one of the most important things we do is to help you minimize the amount of time you spend in line at Walt Disney World. With that said, Disney lines are the stuff of legend, so the key word here is minimize — even with the most well-laid plans, you are going to spend SOME time in line. Indeed, even with a FastPass reservation, it’s not like you bypass the queue entirely. Spending some time in line is just part of the deal.

Nobody likes waiting in line in the abstract, but summer is upon us, and that adds a further wrinkle to it all. Why? Well, for one thing, Orlando transitions from heat and humidity that is merely uncomfortable to heat that will sear your very soul and make you want a shower within seconds of stepping outside. Also, school’s out, and that means that crowds are going to be bigger, so not only are you waiting in line, you’re waiting in line longer. It’s a brutal combo.

Between interactive elements and routing them out of the heat as much as possible, Disney has devoted significant resources to making the time you spend in the queue more tolerable, and Disney lines as a whole are accordingly far more pleasant today than the basic switchbacks of days past. Not all lines are created equal, however, and there remain several that strike dread in the hearts of those in the know. So, without further ado, let’s take a look at some of Walt Disney World’s worst lines for the summer. We’re going to start at Epcot, because while most of the attraction queues are indoors, this park is home to several of the absolute worst lines in all of Walt Disney World — those for the various Princess meet and greets that surround World Showcase. They are a great launching point, because they embody everything that can make a queue challenging.

First and foremost, they are slooooooooow. Characters typically spend a couple of minutes with each guest — sometimes much more — and even with just a few people in front of you, it can take a while. Also, you can see the Princess you’re wanting to meet, which I can assure you will make all of the time she spends with each person seem like even more of an eternity.

Second, for all of the modern “enhanced” or “interactive” queues that exist at Walt Disney World, there is nothing more old school than just stone cold standin’ on a strip of pavement with nothing to entertain you but the people around you, and that’s exactly what you’ll find at these meet and greets. Indeed, most of them are not “queues” at all, but ad hoc lines of people that are organized shortly before a character is supposed to arrive to greet guests. There’s no infrastructure at all, just space.

Finally, the central Florida sun is unflinching, and most of the lines for Princess meet and greets in World Showcase provide exactly zero relief from that sun. You’re completely exposed, with no air conditioning or even shade in most cases. Bring sunscreen and apply it liberally.

The queues at Magic Kingdom have gotten dramatically better over the last few years — not too long ago, Peter Pan would have been a shoe-in to make this list, for example, but now even that queue has been modernized with an indoor (read: air-conditioned) section with interactive elements that makes the wait far more tolerable. There remain a few holdouts, however, and Tom Sawyer’s Island tops this list of the worst Disney lines.  First and foremost, it is slooooooow. Because the boats unload in their entirety, load in their entirety, and then make their voyage to the other side, if you’re not loading, you’re just standing there, not moving at all.

And what are you doing when you’re standing there?  Zilch. The queue has decidedly old school leanings, which is to say that it has none of the interactive elements that you find in modern queues (like at Haunted Mansion) and, while there is a roof providing shade for part of the queue, you’re still out in the heat.  You’re there, you’re hot, and you are 100% responsible for entertaining yourself.

The thing that really elevates the queue to the top of the “worst” list for Magic Kingdom, however, is that you have to do it TWICE. Not only do you have to wait to experience the attraction on the front end, you have to wait AGAIN when you’re done. It’s the attraction equivalent of when you’re ready to leave a restaurant, but the server vanishes when it’s time for the check — except rather than sitting in a restaurant, you’re standing outside. In the heat. With throngs of people. Far from ideal.

Special mention at the Magic Kingdom is also due to Astro Orbiter, another Disney line with none of the interactive diversions granted to modern attractions. It’s outdoors, slow-moving — you’ll be stopped while the ride is in motion, for example — and there’s not a ton of shade as you trod through the switchbacks. Oh, and when you finally get through the queue, the payoff is a spinner. As spinners go, it’s got a nice view, but it’s still a spinner.

The granddaddy of horrible lines at Disney’s Animal Kingdom is unquestionably Avatar Flight of Passage. There will likely be a time many moons from now when this falls off of this list, but that time is not here yet, and it’s not really on the horizon, either. The good news is that much of the primary queue for Flight of Passage is indoors or at least heavily shaded with fans, and the theming in these areas is wonderful, buuuuuuuuuut you’ve got to get there first. As this goes to press, Flight of Passage will still generate awe-inspiring waits from before the park even opens, and the line is large enough to completely fill the primary queue and then some. From the moment the park opens (or actually from before the park opens), there will be overflow lines that stretch all the way out of Pandora — as you can see in the photo, where the lines stretches all the way to Africa. Not only are you a long ways from home, you’re a long ways from home in a basic line with no meaningful shade or anything to see or do. It’s brutal.

Kilimanjaro Safaris is also worthy of mention in an article about rough Disney lines.  Here’s the good news: the queue for the Safari is shaded and surrounded by greenery, so it’s not as bad as it could be. It is also reasonably well themed, for what it is — natural materials, animal spotting signs, that sort of thing helps sell the idea that you’re about to embark upon a legit excursion. With that said, it’s still 100% outdoors, it’s a popular attraction (read: long waits), and there’s really no interactivity to speak of, so nice theming only goes so far in minimizing the agony. Toy Story Land is essentially upon us, and I think it’s safe to predict that both of the new attractions — the Slinky Dog Dash coaster and the Alien Swirling Saucers — are going to command mammoth lines from the word go. Setting that aside, however, the for the attraction with the worst queue at the Studios goes to Rock ‘n’ Roller Coaster. It is shaded, but a good chunk of it is still outside, it’s a popular attraction that commands long waits in basic switchbacks, and there’s just very, very little to distract you.

There is some good news, however — with the arrival of Toy Story Land, this attraction moves to FastPass Tier 2, meaning that you do not need to decide between it and one of the new Toy Story attractions. Between this change and the presence of the Single Rider Line (which we always recommend using as a time saver if you don’t mind splitting up your party), the need to wait in this exceptionally dull queue will hopefully be minimal going forward.

Things to Do in the Queue

Regardless of whether you’re in one of the worst Disney lines or not, you’ve got to find some way to occupy yourself while you’re waiting after you’ve fully exhausted the amount of conversation you can have with your traveling party. It does look like there’s some relief on the horizon from the Mouse itself — Disney is releasing an app called Play Disney Parks that will provide some as-yet-undetermined games and other diversions from the tedium of waiting in line.

Until then, however, Heads Up is a popular app [iOS – Android] that is sort of like password, where you hold your phone on your forehead, it displays words to those around you, and your friends and family (and strangers, you will find) will give you hints to guess the word.  What’s more, there’s a pack of Disney-related cards that you’ll be able to download for free when you’re at the parks. We play it a lot, and not only does it help us pass the time, we often find that we end up chatting with people around us as a result, and that makes the time go even faster.

We always love hearing your thoughts? What lines do you dread at Walt Disney World?  What do you do to pass the time? Let us know in the comments!