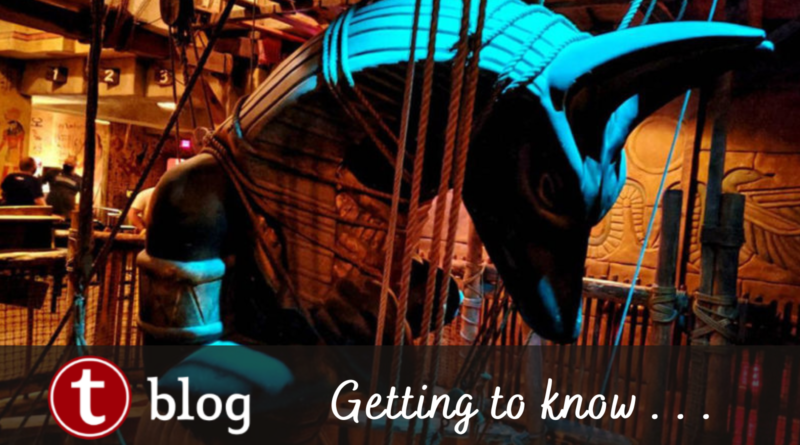 Since 2010, when The Wizarding World of Harry Potter – Hogsmeade debuted and opened the financial floodgates for the resort, Universal Orlando attractions have had a noticeable change – with bigger budgets at their disposal, more immersive experiences can (theoretically, at least) more easily be had. This means that guests have since been able to get lost within Skull Island: Reign of Kong’s massive façade and opening exterior scene, Race Through New York Starring Jimmy Fallon’s VIP tour-esque queue, Hagrid’s Magical Creatures Motorbike Adventure’s narrative-heavy roller-coaster track, and, of course, the entirety of the completely-sealed-off Wizarding World of Harry Potter – Diagon Alley.

Still, even with all of that said, there is one attraction – for my money, at least – that manages to outrank all of the fancy new additions over the past 11 years: Revenge of the Mummy, the 2004 indoor coaster located at Universal Studios Florida. Despite the ride’s aging audio-animatronics (some of which were intentionally designed to be less than fully life-like), and despite its mostly overlooked nature, it remains on the cutting edge in terms of sheer immersion and pure, unadulterated fun. (It’s always my first and last spin on my Universal vacations!)

Here are the three reasons why Mummy simply can’t be beat in the immersion game, no matter how many Boy Wizards or Super Marios may show up afterwards with their game-changing lands.

1. Revenge of the Mummy’s Façade and Queue

In order to hop on Revenge of the Mummy, guests step up to the grand façade of the Museum of Antiquities (a modified carryover from the previous attraction, Kongfrontation, when the building was a recreation of New York City’s Pennsylvania Station), which is currently holding an exhibit exploring mummies and the “curses and legends of the pharaohs.” It is bold and sweeping and classical, instantly setting the stage for the experience that is to unfold.

But the process of going from the strictly historical to the haunting supernatural continues inside the show building, during the first part of the queue. Though now slightly truncated from what it was for most of the ride’s lifespan, this first room prepares you for entering a live film set, displaying a bevy of concept drawings and props for a fictitious sequel to 1999’s Mummy called – you guessed it – Revenge of the Mummy.

Everything kicks into high gear in the second and main section of the line, inside an Egyptian tomb, where the production is currently shooting. As we’ve previously noted, this area constitutes one of the best queue environments in all of Universal Orlando Resort – the dark atmospherics, replete with larger-than-life statues and flickering lights, exude creepiness and immersion in equal measure, almost bodily transporting you to a different (and cursed) world. Many have compared the experience to walking through a Halloween Horror Nights haunted house, and I couldn’t agree more.

And just in case all this submersion into The Mummy’s world isn’t somehow enough for you, there are a few gags hidden throughout the ancient catacombs that really act as the cherry on top: you can trigger different effects by inserting your hand into certain nooks or onto specific plaques, sometimes in conjunction with another individual. The results can be visual or pneumatic in nature, with the coolest one being the opportunity to scare the people ahead of you in line – and observe their reactions.

2. Revenge of the Mummy’s Narrative 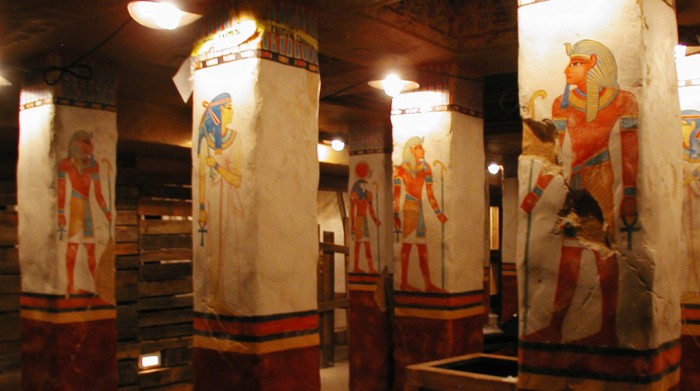 When Universal Studios Florida first opened in 1990, it was designed as a theme park that did double-duty as a working production facility. By the time Revenge of the Mummy arrived on the scene in the mid-‘00s, that duality was quickly being phased out, resulting in a straight-up, Hollywood-less park that nevertheless still endeavored to have its various attractions hook into the filmmaking angle in some way, shape, or form. (Today, that pretense has been entirely dropped, resulting in the likes of Diagon Alley and Springfield, USA: Home of the Simpsons – lands that are fully themed to a specific property.)

In Mummy’s case, this means placing the indoor coaster within the auspices of filming an entirely new chapter in the franchise; it just so happens that, as the queue video informs us, the crew has inadvertently blundered into a real curse in the real tomb – one that also afflicts you as you attempt to do a quick tour of the on-location shoot. This makes the ride Universal Orlando’s most meta, positioning Imhotep and the Medjai order that opposes him as real historical events that get dramatized on-screen in cheesy Hollywood blockbusters.

It might also seem that such a premise would make the resulting experience less immersive, given its constant reminders that Brenden Fraser is, yes, an actor playing a part, but it actually does the opposite – by embracing such a “behind-the-scenes” premise, it subsumes all real-world aspects into the property’s overarching mythology, generally, and makes them further fodder for the thrill ride, specifically. To be more exact, it paves the way for one of the greatest payoffs in theme-park history: Fraser doing an on-camera interview for all those audience members who are making the trek to visit him on set, demanding a simple cup of coffee… which doesn’t arrive until the very end, when Imhotep has accidentally been set free from his real-world confines, “ghostly swoosh” and all.

3. Revenge of the Mummy’s Ride Experience 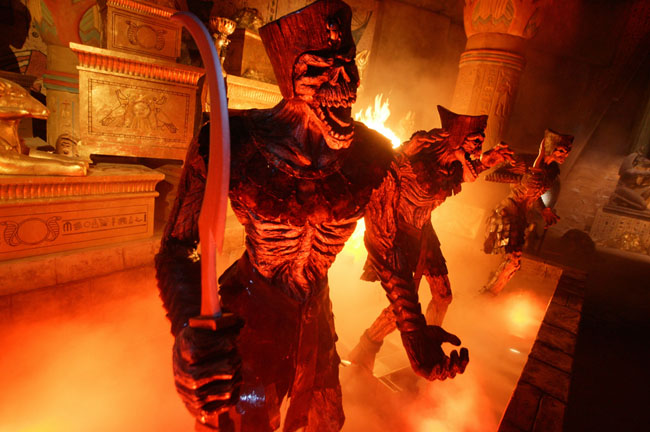 Ultimately, what makes Revenge of the Mummy so immersive is its ride experience, and how, more exactly, it represents the perfect balance between a dark and thrill ride.

The attraction’s first few scenes are classic examples of dark-ride storytelling, using audio-animatronics, rich set design, video projections, and, of course, pyrotechnics to have Imhotep try and seduce you into helping resurrect him. When you and your fellow passengers attempt to make your escape, the more thrilling elements come into play, first in fits and bursts and then, when the ancient gloves are taken off, in an all-out run for your life, twisting and turning through the dark as phantoms attempt to imprison you. And while fire does come back into play in one of the most memorable show scenes in any themed ride anywhere on the globe, it is actually another, more novel item that serves, in many ways, as the ultimate kind of immersion: the ride vehicle slows down, with a team member perched in a control booth over you, welcoming you to the end of the attraction. It is only when Imhotep breaks into the room, zapping her into oblivion and yet again attempting to attack you that you realize it’s a fake-out ending – the first of its kind, and, to this day, a rather unique kind of trick.

It not only plays upon the whole meta schtick of the premise, it also helps to further bend the theme-park rules and blend what a themed experience can be, making Revenge of the Mummy still one of the most envelope-pushing – and immersive – attractions at all of Universal Orlando Resort.

What do you think is the most immersive ride at Universal Orlando? Let us know in the comments.