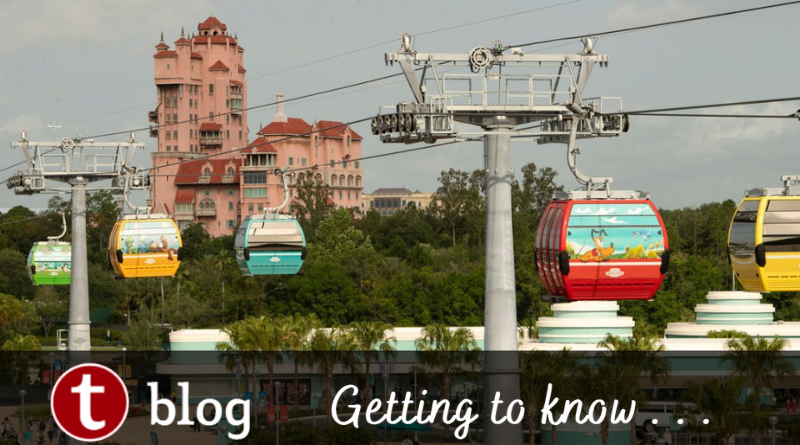 With the launch of the Disney Skyliner gondola system, Disney created a new cluster of resorts that have the sort of “direct to park” access associated with staying on the monorail loop or in the Crescent Lake area. But unlike those areas, which only have Deluxe resorts, the Skyliner brings that convenience to guests throughout Disney’s resort tier spectrum. Now, even guests staying at Value resorts can access EPCOT and Hollywood Studios without relying upon Disney’s buses. It’s a wonderful system that is honestly a lot of fun to experience just for the sake of riding it—and it’s really boosted the stock of the Skyliner resorts. 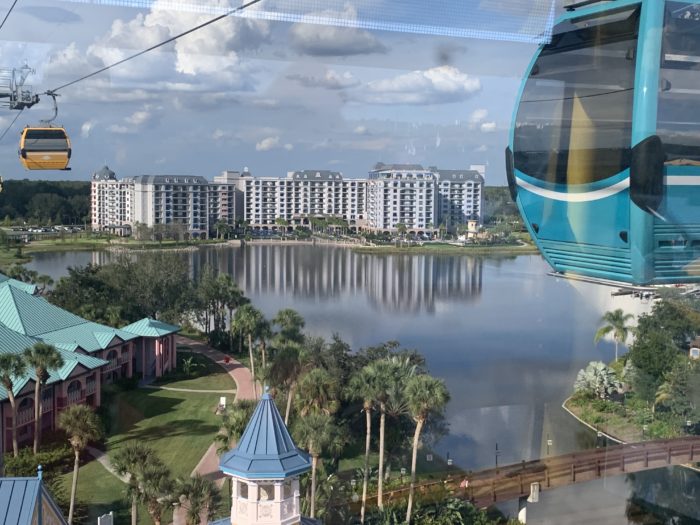 So, which Disney Skyliner resort should you pick? As with most things when planning a Disney vacation, the answer is “it depends.” There are real differences between your options, though, so read on for guidance!

I’m putting this first, because it may be the area where you have the least flexibility. Put another way, if you’ve budgeted for a Value, it doesn’t really matter what amenities are offered at the Riviera. It does highlight, however, that you can stay on the Skyliner route all the way up and down the hotel-tier spectrum, and at any Disney vacation budget.

Here is what you can expect to pay per night at each of the properties on the Skyliner. These prices are for regular rooms (using the Deluxe Studio for the Riviera, as that’s the closest analog):

Staying in Family Suites at Art of Animation or the villas with separate bedrooms at Riviera costs more, as you would expect.

As a Deluxe Villa property, Riviera has the most amenities, the largest rooms, and destination dining on-site. Topolino’s Terrace, the Riviera’s rooftop restaurant, has quickly become one of the most sought-after dining locations at Disney. It’s ranked 3rd among all Table Service restaurants and has a 94% satisfaction rating with our readers. The Riviera has the highest-rated pool of any of the resorts on the Skyliner, and includes both a feature pool with a waterslide and a quiet pool. Additionally, most would agree that the Riviera has the most luxurious, high-end feel of any of these resorts. 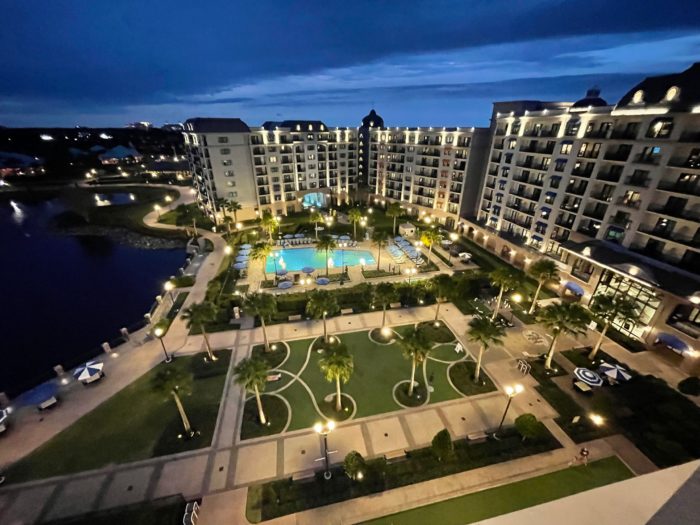 The Riviera is actually a Disney Vacation Club (DVC) property, which means that the “villa” rooms are generally larger and have features that regular hotel rooms do not. Accordingly, Riviera is the one Skyliner property that has condo-style accommodations with separate bedrooms, full kitchens, and common areas to relax in when you’re not in the parks. If you’re a group of 6 or more, the 2- and 3-bedroom Villas can allow you to stay together in the same space.

The additional space you get in these villas is notable compared to other Skyliner resorts. For example, Art of Animation does have Family Suites that include a separate bedroom and sleep up to 6. These are 565 square feet, so the 1-bedroom villas that sleep 5 at Riviera are much more spacious at 813 square feet. It should be noted that some of that extra space is going to a kitchen and in-room laundry, which the Family Suites do not have. If you even need more space, the 2-bedrooms are the size of a small house with 1246 square feet, sleeping 9. And the 3-bedroom Grand Villa provides a very comfortable 2530 square feet for up to 12 to spread out and relax.

Read more about the Riviera:

Caribbean Beach Resort is going to be your middle-of-the-road option. This is the choice for someone who is looking for more than bare-bones accommodations, but doesn’t value the extra level of finish at the Riviera. The Caribbean-themed resort is quite large, and the grounds are well-kept and beautiful. There are wonderful views from every angle as you walk around Barefoot Bay, the large lake in the middle of the complex.

Caribbean Beach has the sort of amenities you would expect at a moderate resort. There is one moderately-priced Table Service restaurant, Sebastian’s Bistro, and 3 Quick Service options. These include a pool bar and a centrally located food court, Centertown Market. 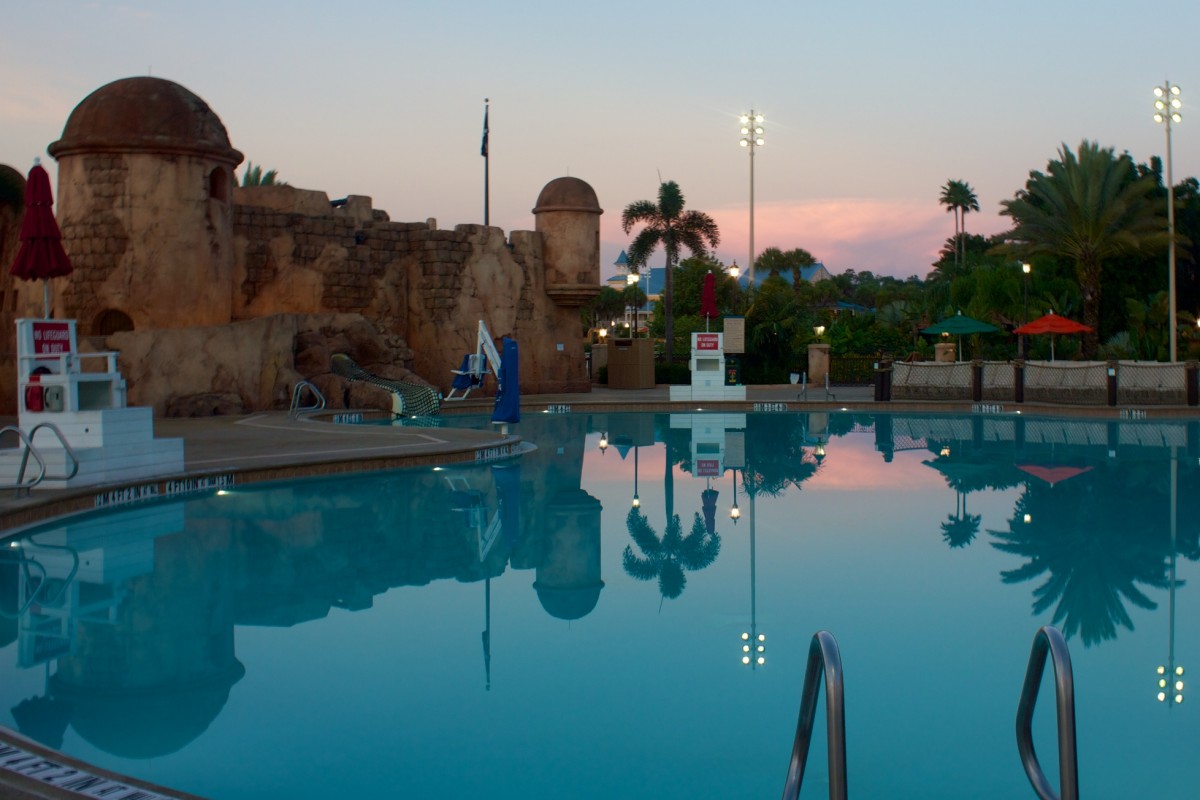 There are 6 pools – one main feature pool plus several smaller quiet pools sprinkled throughout the resort. The feature pool is themed as a pirate-era fort, and has the waterslide that is typical of Moderate and Deluxe resorts, as well as a jacuzzi. If you like to run, or even just take peaceful walks, the path that snakes throughout the resort and around Barefoot Bay is a wonderful outlet to get some exercise.

One great thing about Caribbean Beach is that it basically wraps around and shares a footprint with the Riviera. So, if you’d like to stroll over to have a drink at Bar Riva or enjoy that resort’s amenities (except for the pool), you’re free to do so.

The size of Caribbean Beach is both a blessing and a curse. The spacious grounds provide the opportunity for great atmosphere and lush landscaping. But depending upon where your room is, you could be quite far from the amenities you care about – especially compared to a compact tower resort like the Riviera. Make sure to use our room finder to identify rooms that are near the things that are important to you.

One last thing to note is that Caribbean Beach is the Skyliner hub. Those boarding at this station will not have to change lines to reach any destination. As noted above though, the resort is large, and for guests on the Riviera end (who would find the Riviera’s station closer), that might not be much of a benefit.

Your trip on the Skyliner may take you over Hourglass Lake to the station that services Art of Animation and Pop Century. These are Disney’s two Value resorts on the Skyliner route. The two resorts are essentially mirror images of one other in layout. Each has a large food court in the main building, with buildings and pools spread out around it to the north and south. Despite these similarities, the stay will feel very different at each.

As the newest of the Value resorts at Walt Disney World, Art of Animation is probably the nicer of the two Value properties on the Skyliner. The theming is more elaborate, and it has the best food court of the Value resorts, Landscape of Flavors. The pools are heavily themed, with primary pools featuring Finding Nemo and Cars, and a quiet pool themed to the Little Mermaid. Even though it is a Value resort, the pools are higher rated than at Caribbean Beach. But none of the pools have a waterslide or jacuzzi, which is also the case at Pop Century, and all Value resorts. 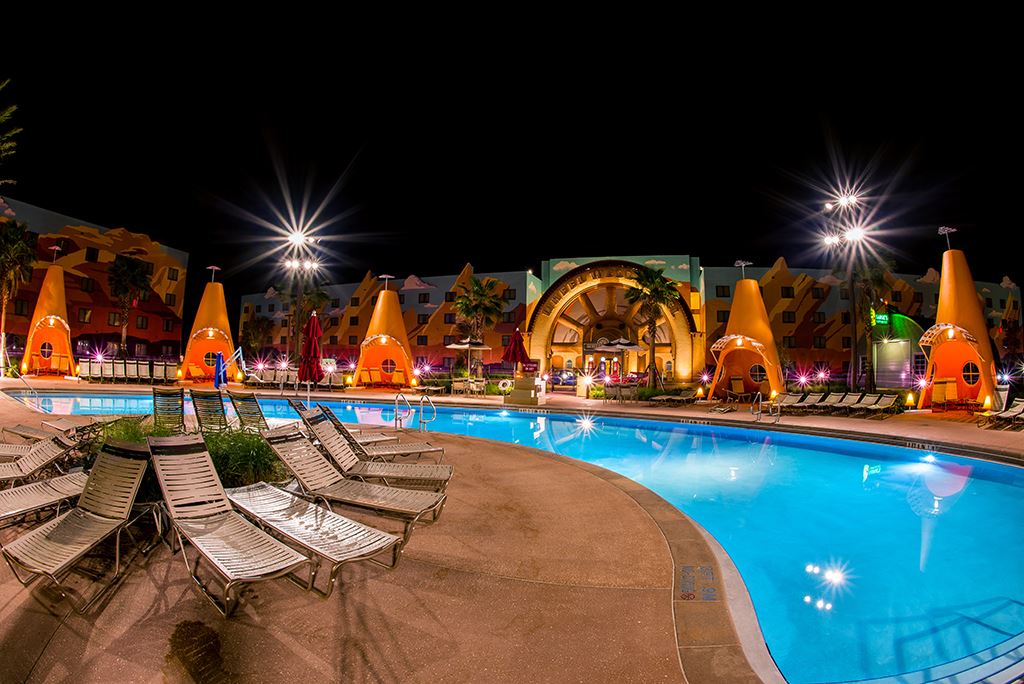 The rooms at Art of Animation are themed after heavy hitters from Disney’s animated movies — Cars, Finding Nemo, Lion King & The Little Mermaid. While not as deeply ingrained as what you would see at Riviera or Caribbean Beach, the theming is quite well done, and the aesthetic of the resort is certainly one of the major upsides.

The big thing that distinguishes Art of Animation from Pop Century is the Family Suites. These rooms for larger groups have 2 bathrooms, a separate master bedroom, and sleep 6. There are common areas featuring a couch and a table to hang out when you’re not sleeping. The Family Suites also have a kitchenette with a microwave, which makes eating in the room more of an option than the rooms that only have a mini-fridge.

These suites are of course more expensive than the regular rooms. The expected range during non-peak times is between $525 and $681 per night. But for larger families who don’t want to spend what it takes to stay in a 2-bedroom at the Riviera or mess with the stress of trying to secure adjoining rooms, it’s a great option.

More about Art of Animation:

At Pop Century, the buildings are themed to pop culture icons of the 1950’s through the 1990’s. For example, the 50’s pool is shaped like a bowling pin, the 60’s area includes Play-doh, and the 90’s area features a lot of tech theming, like a computer pool complete with floppy disk and keyboard. And of course there is no shortage of Disney characters, who are woven into the theming as well. All in all, it’s a lot of fun, and we get great feedback about it from our guests. Between Art of Animation and Pop Century, it could be a matter of whether you prefer cartoons, or cartoonishly large reminders of eras gone by.

Even though it’s often less expensive than Art of Animation, Pop Century actually has the highest rated rooms in the Value tier. It’s a great value for budget-minded travelers. Art of Animation gets the edge when it comes to food, but the two resorts are close enough that walking over there is a viable option if the food at Everything Pop isn’t doing it for you.

What’s your favorite place to stay on the Skyliner? Do you think the Skyliner is enough of a perk to choose a Skyliner resort over a similar resort that doesn’t have it? Let us know in the comments!

5 thoughts on “Which Skyliner Resort Should You Stay At?”