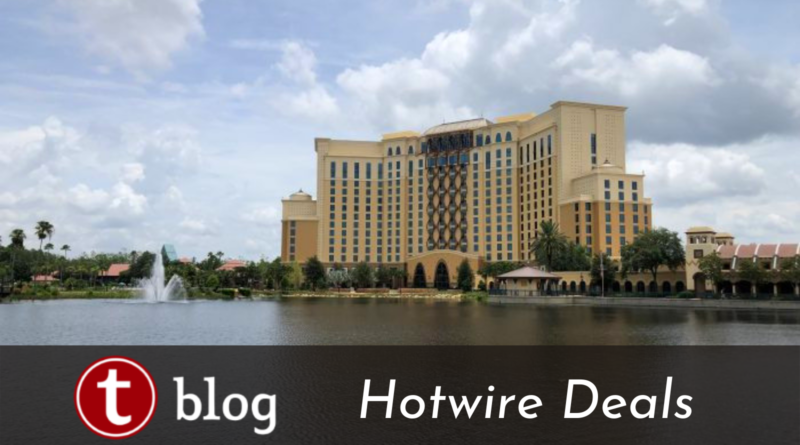 Hey, remember those $150 Coronado Springs Gran Destino Tower deals in August? How about those $89 Pop Century deals? You can still book some of those great rates now!

But how about something even more impressive, where you can enjoy views such as the one I ogled at for several days last week? 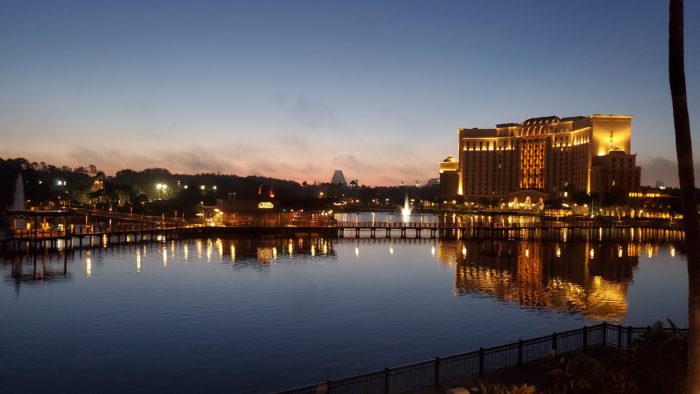 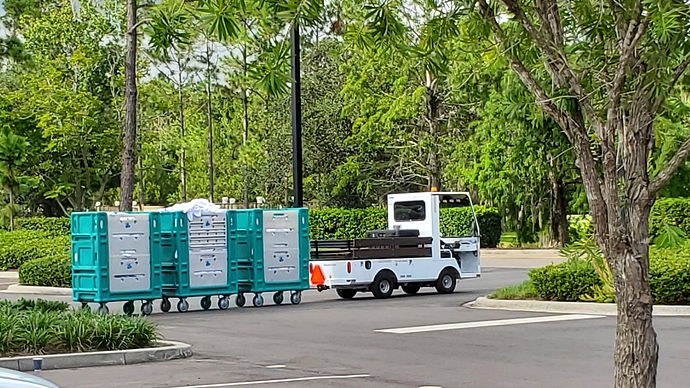 Where you can get personal deliveries of towels and room supplies, just like this one heading towards the Tierney room after a 1,235% humidity day in Animal Kingdom?

(It was a standing order created by the Coronado Springs management after I walked into El Centro and may or may not have taken a swim in the fountain in front of Panchitos.) 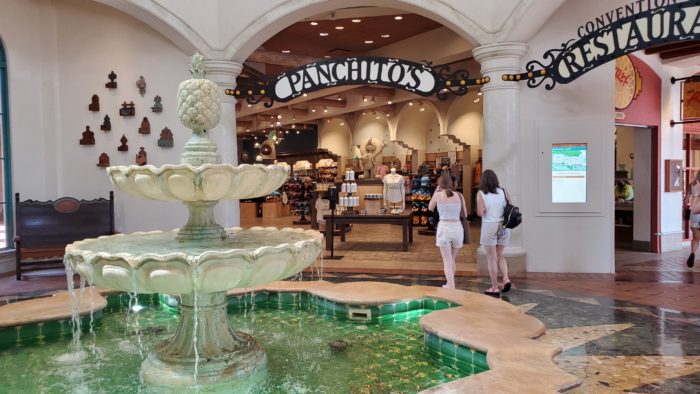 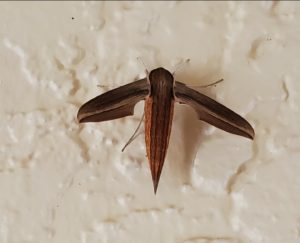 All in all, Coronado Springs is a terrific resort – a nice vibe and excellent food, we absolutely loved it there. In fact, I can’t show my daughter any Hotwire deals, as she wants to drop out high school and live at the resort as long as her refillable mug holds out and in spite of the wildlife I have named the Florida Death Almond appearing in random locations.

(I have been informed that these are actually sphinx moths and are completely harmless. But I just like saying “Death Almonds.”)

Now, have I given you the desire to visit Coronado? How much more would you like to stay there if I tell you there are deals as low as $104 per night out there in September?

Well, there are HotRates sprinkled out there through the first half of September right now for both Pop and Coronado Springs. As usual, Hotwire’s deals come and go depending on which app or browser you use, but if you search one day at a time, you’ll likely spot deals like the ones in this Calendar of Deals. 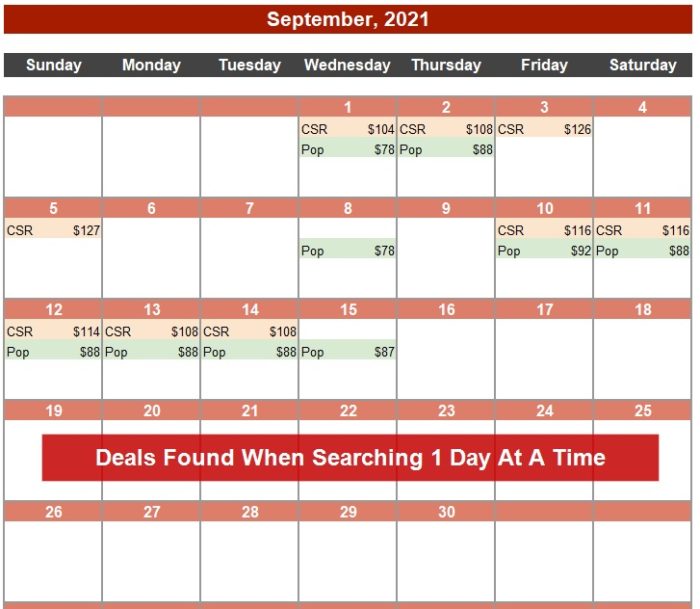 If you are hoping to find something on those blank days in the calendar, be sure to try out various date windows in the Hotwire search. You will often find more deals will appear as you slide the starting and ending dates around. For example, here’s a listing of various dates I tried to see what I could tease out. 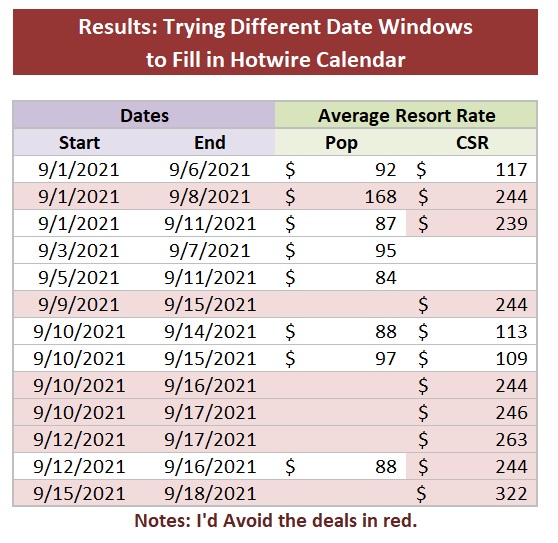 You might notice some odd results here – my initial reason to research Hotwire and Priceline Disney deals was to see if I could find some patterns to help us all know when to book things. But, often there just ain’t no patterns.

When I searched for the dates 9/1 to 9/6, I was able to get deals for both resorts that Saturday night to show up. But when I extended it a little further, the deals increased in price to the point where they weren’t worth booking. Then, when I pushed the end date all the way to 9/11, I got an $87 Pop Century rate all the way through.

Also, be aware that Hotwire continues to be inconsistent: sometimes, the same search will show different results. If you don’t see a deal, try another app or even clear your data cache and start again. Then keep checking – sooner or later luck will be on your side. (Luck is a good thing to have with those Death Almonds flying around, I can tell you.)

Spotting the Coronado hidden deals is fairly straight forward: Look for a 3.5-star, 4.4-guest rated resort in Bonnet Creek. I included a few examples of it in the last blog post.

There are 3 other resorts with that rating:

Pop Century is even easier to identify in hidden deals: on Hotwire it is currently the only 3-star, 4.4-guest rated resort in Bonnet Creek. Again, see our previous post for some examples.

I just got back from Walt Disney World, and I’m having trouble not booking one of these nutty $104 Coronado deals. Plus, I really want to send this to my kids again. 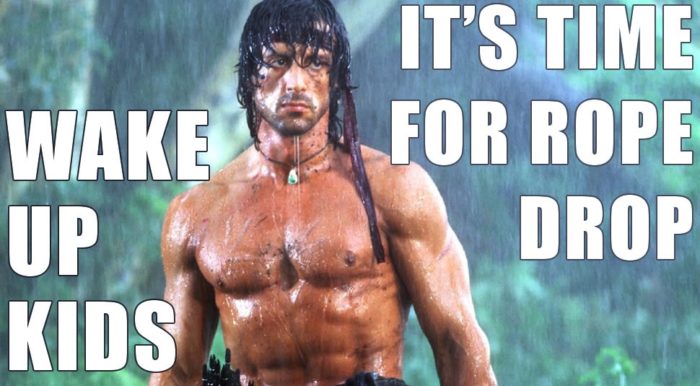 If you book one of these deals and are excited about it, or just like dressing up like Rambo in the rain – let us know in the comments!