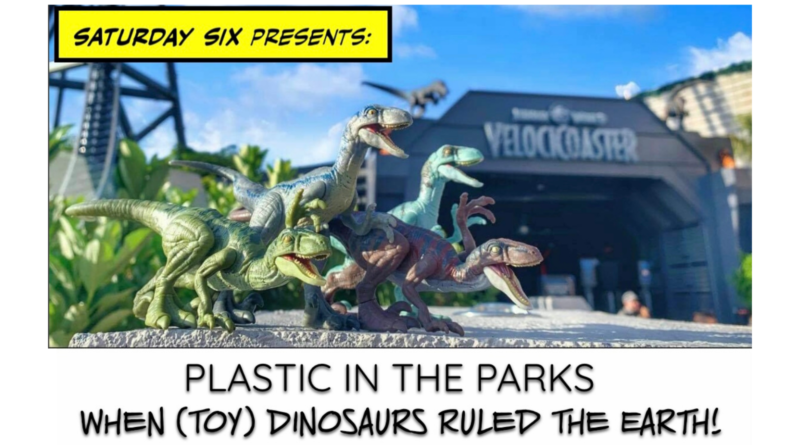 This week’s SATURDAY SIX is the return of our Plastic in the Parks series! The theme park summer season officially kicked off with the grand opening of the VelociCoaster back in early June, and for us it ends next week with the closing of the Jurassic World Tribute Store on August 9th as the theme parks prepare for the spooky season. To celebrate this Dino-mite summer we reached out to photographer Michael Carelli and demanded politely asked that he get some more LEGO and head into the Universal Orlando Resort for some dinosaur related frivolity. Care to tag along? Let’s go!

There’s no two ways about it, Camp Jurassic is the #1 most underrated attraction in Orlando. Because there are no rides for adults, many guests completely skip this area, but I implore you to check it out on your next trip to Universal. This is the most immersive play area I have seen in my entire life, with two completely different components. Think of it as a dinosaur themed Tom Sawyer Island, except with a lot more stuff to interact with. Slides, rope bridges, water cannons, and more are mixed in an insanely elaborate rainforest theme.

But the real draw to Camp Jurassic is the amber mines. Forget kids, I have gotten lost in this area several times… it’s incredible. In fact it is almost impossible to believe these actually exist in a theme park, let alone a kid’s play area. The caves are so detailed and immersive it is as if you stepped into another world. Highest possible recommendation.

I am going to take some heat for this one, especially from hardcore Universal fans. But that’s okay, as this is a theme park hill I’m prepared to die on. Pteranodon Flyers makes the “worst” list for many guests, mostly because of its horrendous loading time. I’m not here to defend that, but I think that it is awesome that a theme park has an attraction which caters directly to small guests, especially Islands of Adventure. One of the knocks against Universal, and one they have made great strides in overcoming, is a perception that the parks are not kid friendly.  At IOA, there is one ride after another that they are told “No” to, but not only is Pteranodon Flyers a “Yes,” it is the one ride at either park where you have to be with a small child to ride. I think it is fantastic that there is an opportunity to make these smaller riders feel special, that they can go on a cool ride that their older brothers and sisters can’t, because it’s almost always the opposite. Pteranodon Flyers is also cool, having that Magic Kingdom Skyway-feel that many of us miss. Thankfully the attraction has gone to a “virtual queue” experience, which is a huge positive, and the queue itself is gorgeous to walk through.

While Hogwarts Castle in the Wizarding World has replaced it, there was once a time when the Jurassic Park Discovery Center was the “weenie” of Islands of Adventure. It is what your eyes are immediately drawn to as you exit Port of Entry and they did an incredible job of replicating the feel of the visitor center from the original Jurassic Park film.

Because there are no rides at the Discovery Center, many guests now pass it by on their way to Potter or Kong, but it is worth checking out to experience all the interactive elements inside. With tributes to Mr. DNA and Dennis Nedry’s Barbasol can, this area is a must for any hardcore Jurassic Park fan, Also underrated is going out the back entrance of the Discovery Center (the side you see from Port of Entry) and just taking in the gorgeous view you have of IOA. Also located in the Discovery Center is the Burger Digs restaurant and one of the more unique gift shops in the entire park (selling everything from silly dinosaur plush to high end amber jewelry).

We have already gone on the record that the Velociraptor Encounter in Jurassic Park is the best meet and greet in Orlando, and this year Universal made the area even better with the introduction of the baby raptor Sierra. A handler allows Sierra to meet guests in a low-tech meet and greet that provides a lot of awe to kids.

What else can be said about the biggest theme park hit of 2021? The VelociCoaster is already a finely tuned machine that pumps out guests like nobody’s business. The queue is wonderful and the ride was an immediate hit. I love comic book superheroes and the Wizarding World as much as anyone, but dinosaurs are timeless and will always be cool. ALWAYS.

Because guests are gonna guest, after VelociCoaster opened Universal had to build a barrier to make sure people didn’t throw things at the coaster trains flying by above them. Universal didn’t mail this one in though. Nay Nay. The structure they built included an iconic Jurassic Park archway. This is one of those situations that they didn’t have to go that hard, but thankfully for all of us they did.

Universal has been killing it when it comes to Tribute Stores and the Jurassic World store in support of the VelociCoaster opening may have been the best one yet. Filled with great merchandise and tasty treats, the store itself is also elaborately themed to the Jurassic Park and Jurassic World films, including screen used props from the actual movies! It’s fan service to the nth degree and the complete opposite of what Universal’s competition down I-4 is doing.

What’s the only thing better than a wax mold machine at a theme park? TWO WAX MOLD MACHINES.

For those who enjoy the edible piñata gimmicks that you’ll find at The Ganachery in Disney Springs, the Tribute Store features one involving dinosaurs.

Everyone loves taking a picture of the iconic Jurassic Park arch at Islands of Adventure and our LEGO do too.

So there you have it: SATURDAY SIX Presents: Plastic in the Parks – When LEGO Dinosaurs Ruled the Earth! See you next weekend for the latest installment of the SATURDAY SIX, where we’ll look at something fun from the world of Disney and Universal. You can also follow Your Humble Author on Twitter (@derekburgan).

The SATURDAY SIX Presents: PLASTIC IN THE PARKS at the Wizarding World of Harry Potter

2 thoughts on “SATURDAY SIX Presents: Plastic in the Parks – When (Toy) Dinosaurs Ruled The Earth”