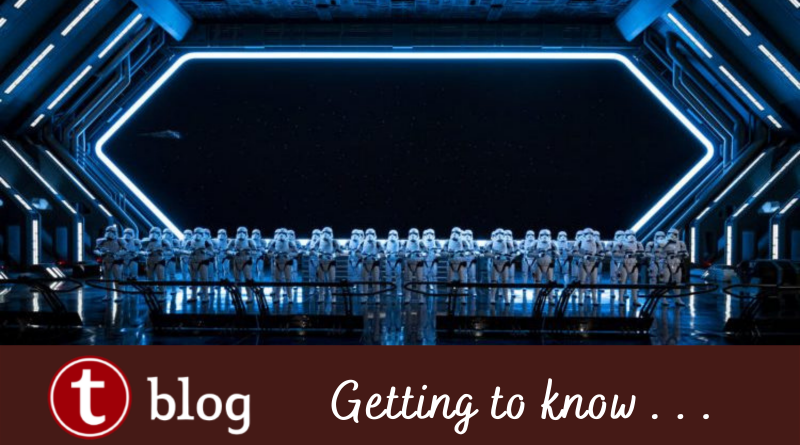 When Hollywood Studios reopened on July 15, 2020, they implemented the hours of 10 a.m. – 8 p.m. Disney shortened the hours so the park closed at 7 p.m. within two months, on September 8. One of the park’s major concerns has undeniably been Rise of the Resistance’s rider capacity, so I was curious: How much were the shortened hours going to affect the ROTR numbers? In my last article, I touched briefly on some differences that can be seen between 7 p.m. and 8 p.m. closing. In this article, we’ll take a closer look, and answer the following questions: Do 7 p.m. closings alter how Disney gives out boarding groups? Do they alter how many they’re able to call? And if so, to what degree?

Anyone who’s spent any time following the performance of ROTR knows how fickle it can be. It has plenty of outlying disastrous days. For example, there’s a stretch of eight days in late August where it hit 95+ boarding groups each day, except one day in the middle where it called only 41. The ride has also improved its reliability over time. August 11, 2020, was a dark day for ROTR. It remains the only post-pandemic day with zero called groups. But bad as that day was, it marked a new era for the ride. In the 27 days days prior, it had an average of 72 groups called per day. In the 27 days following (up to the end of the regular 8 p.m. closings), the average skyrocketed to 91. Whether Disney fixed something or learned some lesson, the change was clear. Totals in the 60s, 70s, and even 80s, once commonplace in July and early August, are now much rarer. These factors make comparing the differing closing times a challenge. So we’ll look at it in a few different ways.

The simplest way to compare 7 p.m. and 8 p.m. closings is to look at their lifetime averages.

Unbelievable as it may seem, overall, 7 p.m. closing days have a slightly better calling average than 8 p.m. closing days. This fact shows further undeniable proof – ROTR may still have bad days (it’s not having a great one as I type this), but its reliability has greatly improved. The average 7 p.m. day currently serves far more groups than the average 8 p.m. closing in July and early August did.

It’s in stark contrast that 8 p.m. closings distribute almost 10 more BGs on average than 7 p.m. closings, but there are more caveats here. There’s an asterisk in the table above because I’ve only seen distribution data as of August 10, one day before ROTR’s aforementioned day of reckoning. This explains why the table above seems to show the 8 p.m. days with a very poor average of 13 uncalled BGs a day. Those numbers don’t include the same sets of days, and we know the average after August 11 is much higher. However, this also forces us to weed out most of what we’ll refer to as ROTR’s “warm up” period. This would make the comparison between 7 p.m. and 8 p.m. more fair. Let’s look at the numbers a different way, to put everything on even more equal grounds.

We know Disney took its time to get ROTR  running reliably, causing an unfair blow to the 8 p.m. closing average. That warm up period from July 15 to August 11 has lower numbers to such an extreme degree, we need to remove them completely to get a more representative analysis. Making this even trickier are outliers – disastrous days for ROTR where the ride was clearly having major problems. We’ll identify these as any day calling less than 60 groups.  In the past seven weeks since the end of the warm up period, there have only been five.

The table showcases ROTR’s devastating three-day span in September when it constantly struggled to maintain any sort of pace. In fact, following these three days, ROTR almost seemed to undergo a sort of physically therapy for a few more days, as it gradually worked back up to a typical performance level. The 7 p.m. dates, with only 18 days under their belt so far, are forced to bear this burden. While we’ll leave in those subpar “therapy” days (which called an average of 73 per day for three days), we’ll remove the three days of misery, as well as a couple very bad days in August under the 8 p.m. days.

When we throw out as much noisy, messy data as possible, we see that the loss of an hour does little to either of ROTR’s numbers. The 8 p.m. days only average about 5 more groups per day in each category. And in fact, if we remove those three “therapy” days from the 7 p.m. closings, they average 96.4 called and 98.5 distributed, evenly matching the 8 p.m. days.

Why Does the Extra Hour Have So Little Effect?

We’ve looked at a lot of cold hard numbers, which help to illustrate the overall trends, but let’s take a look at some good examples to help explain why 7 p.m. and 8 p.m. closings are so similar, as well as what practical differences can be seen. Hollywood Studios extended their closing to 8 p.m. last weekend, and a couple things occurred that beautifully illustrate what’s happening here.

As discussed in my last article, we know that when Hollywood closes at 7 p.m., Disney will often call groups up to (or even a little beyond) closing time if it will allow them to finish up. Based on this, we can conclude that had the park been closing at 7 p.m. that day, reaching 112 groups would have been doable without the downtime. But the downtime here shows the most important difference between 7 p.m. and 8 p.m. closings, because on this evening, the extra hour saved the day for those final groups. Had the park been closing at 7 p.m., groups 106 – 112 would have never been called.

Lastly, ROTR gave us a tailor-made comparison last Sunday and Monday. Despite 9/27 and 9/28 closing an hour apart, the consecutive days distributed and called the exact same number of groups: 120, just 8 shy of the post-pandemic record high. Take a look at the progression throughout these days. 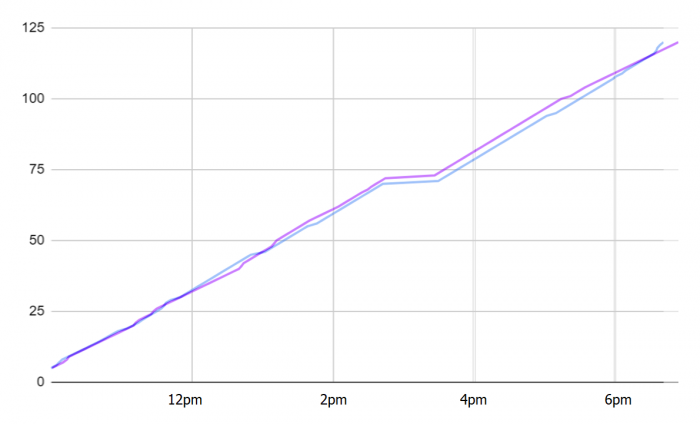 The two days are nearly identical, even having approximately 45 minute pauses at almost the exact same times. While Monday, represented by the blue line, lags just behind for most of the day, it passes at the very end and finishes up 20 minutes early than Sunday. Even with the 7 p.m. close, they were still able to achieve a superbly high total.

So do shorter hours affect ROTR’s ability to distribute as many groups? They really don’t to any significant degree. The ride tends to have similar goals each day regardless, and CMs don’t appear to plan for calling groups past 7 p.m. when deciding how many groups to give out at 2 p.m. The extra hour of 8 p.m. closings aren’t used as an advantage in that way.

Do shorter hour affect how many groups they call? It can, and this is the key difference. Disney does appear to only give out what they think they can handle, based on whatever is happening at the moment, so the numbers they call are very similar whether they close at 7 or 8. But when things go wrong during a day with a later close, Disney has shown a willingness to use some of that extra hour to help catch up.

In short, 8 p.m. closings don’t really allow more groups to be assigned, but they do allow Disney to get away with a few more mistakes on days when they’re struggling.

Whether Rise of the Resistance is on your must-do list or not, a touring plan can help you make the most of your time in Disney theme parks. Become a subscriber here.

Have any questions or thoughts about Rise of the Resistance and closing times at Hollywood Studios? Let us know in the comments.