The time for training is over. Whether you’re walking, running, or cheering, it’s finally here, Marathon Weekend is upon us. Let me take a moment to congratulate you here and now. Oh, sure, none of us have run those races, or braved the morning hours to cheer on the runners just yet. That doesn’t matter because you are right now in the final moments before the races. You’re either already here visiting the parks or about to be. And you’re going to learn what I was surprised to find out just two years ago… this is one of the most magical weekends Walt Disney World has to offer.

Last week, I read Ryan’s post about how his wife and his mother-in-law are about to run their first 5K this upcoming weekend and it got me thinking – that was me once. I was in a car at 2am on my way to Epcot to cheer on some friends as they ran in the 2010 Half Marathon. Nothing could have properly prepared me for what I saw that day. Previously, when I though of runners I pictured Olympic athletes moving like gazelles across the race course. What I learned is that, like many things, that’s far from the truth – runners come in all shapes and sizes. I also learned that a weekend full of races is a lot of work. Enjoy the adventure that awaits you.

For 2012, Marathon Weekend runs from Thursday January 5th – Sunday January 8th. If you are looking to track runners, this year’s tool not only provides you with the ability to track runners via text messages (which haven’t been super reliable at past events), but also to track them via email, Facebook, and/or Twitter. This is a great leap forward. If you’re looking for some Disney cheering swag, there are ChEAR Squad packages that come in several levels depending on the experience you desire.

There is also the Online Spectator Planning Tool if you’re looking to plan out some nice spots to watch your runners. You’ll need to have know their expected pace or finish time. Be forewarned though that if your runner is like me you should be padding this time out somewhat because there will be things to stop off and see along the way like characters, and photo opportunities in from of Cinderella’s Castle in Magic Kingdom. So use it as a guideline, and be prepared to adjust as needed.

Located inside of the HP Field House and the Jostens Center. Inside you will find various seminars and tons of official race merchandise, as well as vendors selling you all sorts of running paraphernalia from headphones to sneakers. All race packets, ChEAR packs, pasta party tickets, etc. must be picked up at the expo the day prior to each event.

In order to pick up your race packet you will need create, print, and bring your personalized waiver. If you’re unable to pick up your own packet, there are some special instructions for absentee pickup you can find on the Event Details page. Inside you will find your numbered bib, which for runners of the Half Marathon, Marathon, or Marathon Relay will have your tracking tag affixed to it – don’t remove the tag, it doesn’t go on your shoe any longer. You’re pack will also include your bag clear check bag and a sticker for it that matches your bib number – if you’re going to use your bag, make sure it’s stuck on.

Bus transportation for the Expo between Walt Disney World Resort Hotels to the ESPN Wide World of Sports Complex will be provided.

Cheering for the 5K is fairly simple. You can watch the runners at the start of the race, and then again at the finish of the race. This is all from the Imagine Parking Lot – you will not be allowed into the park to cheer. The course is very similar to other Epcot 5K races with a slight adjustment to the starting area, and some additional turns near the end of the race. For runners there are a number of interesting backstage elements as well as character meet-and-greets all along the race course. So runners be prepared with your camera or smart phone. 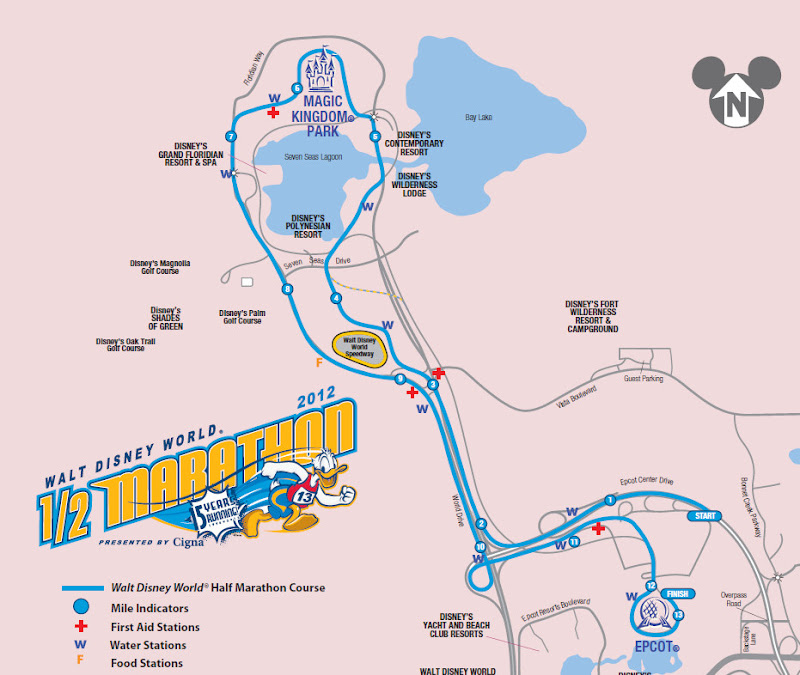 For the Half Marathon while there are several viewing locations available throughout Walt Disney World property along the race course, Disney recommends the following 5 locations:

While this year I will be running in the Half and leaving leading details for my friends for this race in the capable hands of my friend Shalon and my wife Cheryl. However, my personal preference for cheering is Epcot Center Drive (Mile 0), then to Main Street U.S.A. (Mile 5.3), then back to the bus terminal at Epcot to catch the runners as they return to Epcot (just about mile 11.5), then finally at the Mile 13 marker which is near the old Epcot dog kennel. Depending on the speed of your runners, you may have to run between those last two locations yourself. 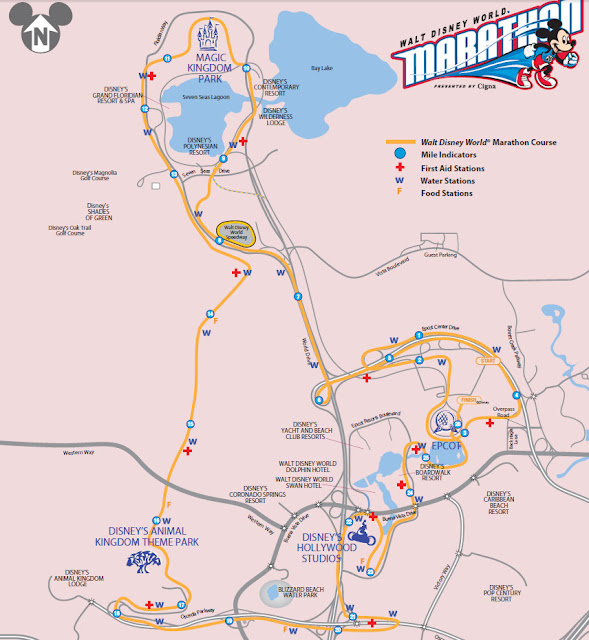 The course for these two races visits all four Disney World Theme Parks. Disney recommends the following 9 cheering locations (** = relay transfer point is not for spectators): 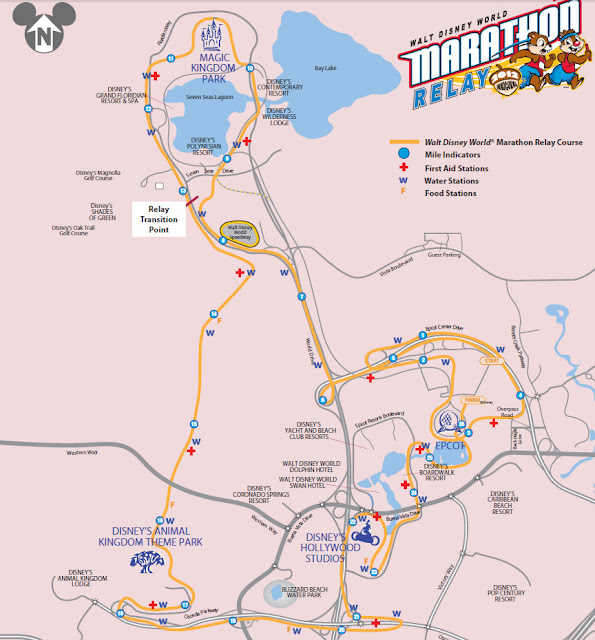 For these races, I will be cheering with some friends for some other friends. I do not plan to cheer in either Animal Kingdom or Hollywood Studios. It’d be very difficult to cheer in all four parks, and due to the various road closures and detours you’re better off sticking to Magic Kingdom and Epcot as you do for the Half Marathon though you could also choose to do the Studios instead of Epcot. My recommendation is to start at Epcot Center Drive (Mile 0 / 4), then Main Street U.S.A. (Mile 10), then back to Epcot to see runners inside the park.

Transportation for the Half, Maration, & Relay

On Race day, the monorail will begin running at 3am to take both runners and spectators from the Contemporary, Grand Floridian, and Polynesian to Epcot. All other WDW Resorts will start running buses to Epcot at the same time. It is suggested that all runners plan to board a bus or monorail no later than 4am as they are required to be in their corral at 5am. Spectators that wish to view the start of the race should plan to either travel with their runners or arrive no later than 5am.

If you are traveling by car to Epcot expect their to be delays. Roads around the Walt Disney World resort will start being closed on both Friday and Saturday night, and there will be several detours . Most importantly on both Saturday and Sunday morning from 5am to 7:30am the Entrance to Epcot will be closed. During this time all traffic will be directed to the Magic Kingdom Parking Lot where you will then be able to take the monorail to get to Epcot.

For the Relay, both runners should follow the same 4am / 5am planned arrival to Epcot as the runners for the Marathon. However, once Runner #1 heads to the corrals, Runner #2 can then board a special bus from Epcot to the relay exchange. Runner #2 must take this bus by 7am, but should plan accordingly by taking into consideration the pace of their partner.

After the races there will be bus or monorail transportation back to resorts as needed. However this special transportation will end at 10:30am on Saturday and at 2:30pm on Sunday.

What to Wear / Carry

Two years ago I stood in the parking lot of Epcot before the Half Marathon and watch it snow and then stood in sleet the rest of the day. In 2011 I fought a bitter early morning chill only to be warmed up later on when the Sun came out while cheering for both the Half and the Full Marathons. This year looks to be a warmer year – to me it looks to be perfect running weather. On Saturday the low will be 54 and the high 75, then on Sunday the low will be 59 and the high will be 78. It means I’ll be sticking with my planned t-shirt and shorts for the Half.

I also plan to have a running belt with me that will carry two bottles of water so I can hydrate at my own pace rather than wait for the water tables. On the belt I will also carry a towel so I can wipe down if needed. Inside the pouches of my belt will be my room key, my ID, my Annual Pass, a package of Clif Shot Bloks which I use to fight off hunger while running, and, of course, my iPhone. I’ll be listening to a round of Disney Movie Soundtracks throughout the run.

In addition to entertainment, my iPhone will be my lifeline to my friends who are both running like Lindsay and Jackie. I’ll be texting through both races with them and others. This is primarily so we can be motivational with each other and it allows for friends who are cheering us on to get a better idea of where we are throughout the race. I do this during my walking intervals, I’m not sure I could manage to type on my phone while running. I’m ready to run this race and cheer for my friends as well.

What about you? Are you planning to run any of the races Marathon Weekened? Cheer for a particular runner? Just there to watch? Hiding in your resort room until it’s all over? No matter your choice, good luck, and have a safe race day.