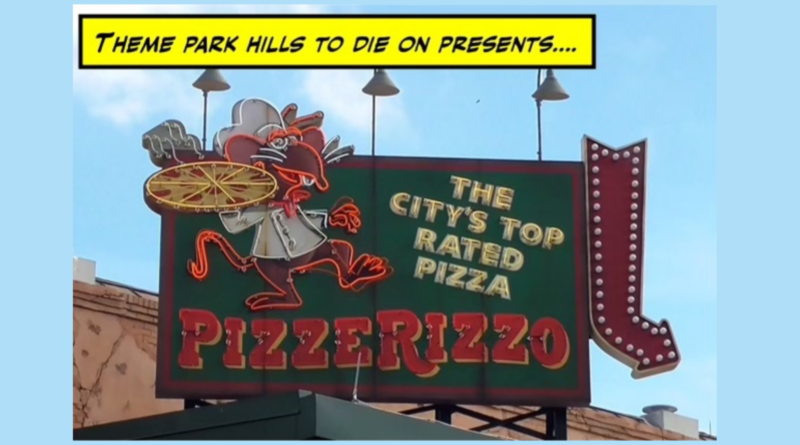 This week’s SATURDAY SIX is an exciting new edition of our popular series, Theme Park Hills To Die On! Quick backstory: when at the theme parks, there are the occasional moments where we enjoy things that seem like no one else does. Yet despite the rolling eyes and incredulous gasps from our family and friends, we will defend these treasured moments to the death.

Enter the Theme Park Hills To Die On series, where myself and celebrity guest authors will take something from the theme park world that many scoff at and explain why we love it so much. I kicked it off with a look at the SKILL GAMES at Universal’s Springfield USA, but today we are going to take a culinary adventure. While we all have our favorite dining experiences at Walt Disney World – including Boma, Art Smith’s Homecomin’ and Sci-Fi Dine In – very few would choose PizzeRizzo at Disney’s Hollywood Studios. However, one person would. That person is Alicia Stella and she’s here to tell you why. Take it away Alicia! 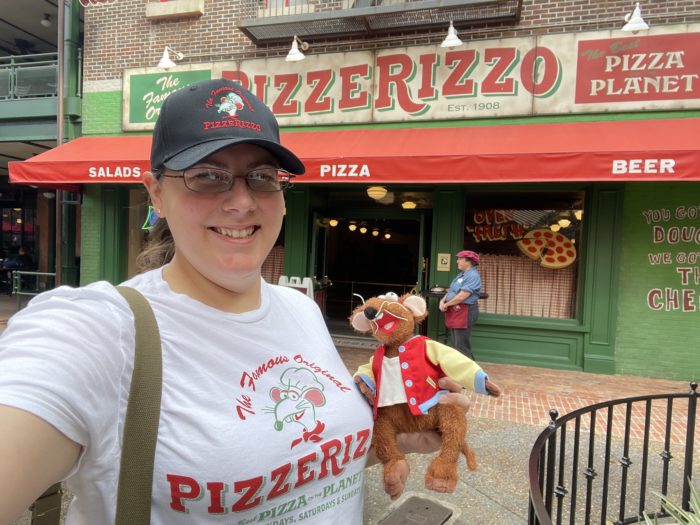 I’m not going to lie. It was hard at first to admit I actually liked PizzeRizzo at Disney’s Hollywood Studios. There was a time, not long ago, when it just wasn’t something you admitted out loud. Sure, you might go there and enjoy your meal between rides on the Tower of Terror, but you wouldn’t dare post a pic of the “pizza” from PizzeRizzo on Instagram.

Then one day, I decided to just let the world know: I like PizzeRizzo.

To my surprise, in the years that followed my brave proclamation, others have stepped forward and admitted that they too enjoy eating at The Riz. There are in fact dozens of us. DOZENS! (There are so many of us that we won a very important internet poll for best restaurant at Walt Disney World.)

You know what? Maybe you would like it too if you just gave it a chance, and here’s just a few of the reasons why…

# 6 – The Atmosphere (AKA Air Conditioning)

This is usually my go-to argument when trying to convince others in my party to dine at PizzeRizzo, and when you’re in Florida it’s a pretty valid one at that. The AC inside is unmatched when it comes to the other counter server offerings at Hollywood Studios. The atmosphere is very inviting in general. You’ve got sappy old Italian music playing on the speakers, just like you used to hear at The Olive Garden. There’s napkin dispensers on every table, which at Disney World, is pretty great. The rats really know how to put out a good spread. 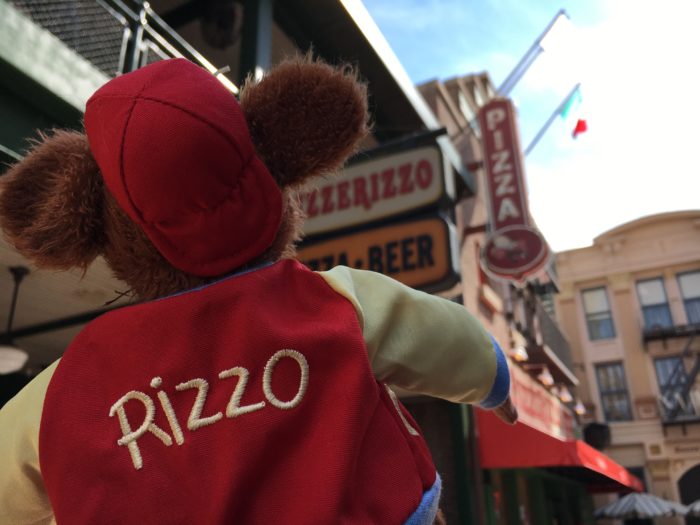 For reasons unknown to me, some people enjoy eating outdoors. Well look no further, because Rizzo has set up a nice upstairs covered patio that’s perfect for people watching (and the powerful fans above don’t hurt neither). 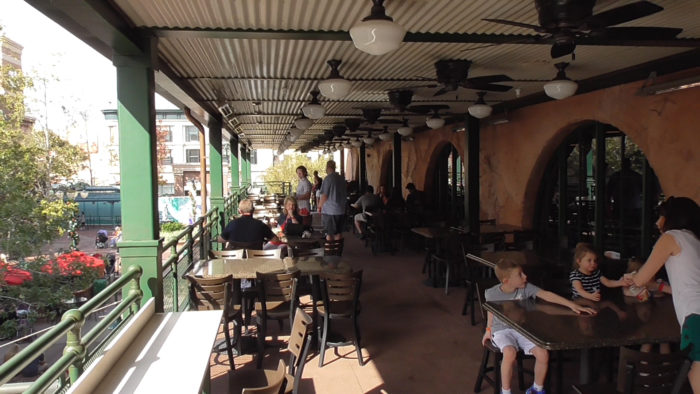 If there’s one thing fans of The Muppets should appreciate about PizzeRizzo is just how well the lore of these popular characters has been integrated into the restaurant. If you’ve been upstairs, you may have noticed a bulletin board filled to the brim with various references to multiple Muppets, like Rowlf, Fozzie, and the Swedish Chef, but there’s so many more subtle nods all throughout the place!

What look to be regular old black-and-white photographs reveal hidden Muppets when you give them a closer look. Every piece of bric-a-brac on the wall is either related to rats or pizza (which you’ll find is a running theme).

If you are a fan of classy joints at DHS, you may find yourself dining at the fancy shmancy Hollywood Brown Dereby. While PizzeRizzo doesn’t offer any hoity toity drinks, it does have something equivalent to the caricatures that line the walls of the Brown Derby. However, instead of celebrities no one outside of your great grandparents have ever heard of, PizzeRizzo’s drawings are of MUPPETS. 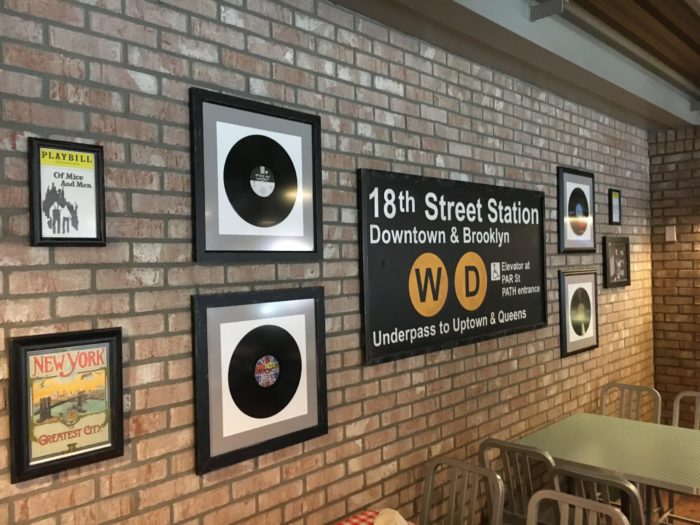 Be sure to check out the record albums hanging on the walls, including one featuring Dr. Teeth and The Electric Mayhem!

There’s even a framed record by the “Mice Girls,” which is not only a pun on the Spice Girls, but is actually a reference to a scene in the movie Muppets from Space!

My favorite Muppet reference is a really deep cut though. A reception sign outside of the upstairs banquet hall (and we’ll get to that next), says “somebody got married,” which in itself may be a nod to the song “Somebody’s Getting Married” from The Muppets Take Manhattan. The people getting married? Gil & Lil, daughter of Will & Jill, son of Phil and Bill. And if you’re a fan of that film, those names just jump-started your memory of when Kermit lost his and joined an advertising firm. But wait, there’s more! In faded lettering behind the current lettering, you can just make out the words: “Pa Otter Memorial Service,” an allusion to the somewhat obscure Emmet Otter’s Jug-Band Christmas special that first aired in 1977! This sign is like a turducken of Muppet nods!

While not a Muppet reference, one great easter egg at PizzeRizzo is on its outdoor signage. 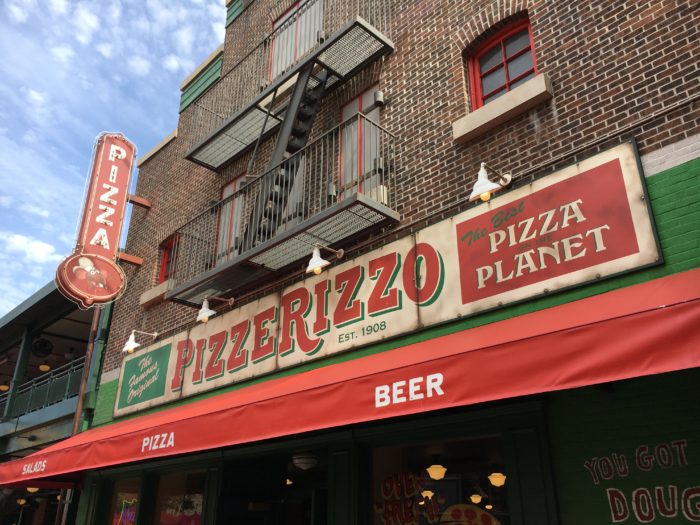 PizzeRizzo is proclaimed to be “The Best Pizza On The Planet.” The words Pizza and Planet are written in a much bigger font than any of the other words. This is a clever nod to the restaurant’s former resident: the Toy Story “themed” Pizza Planet.

What’s that? You’re not in the mood for sappy old crooner songs? Don’t worry, The Riz’s got you, fam! Look no further than Rizzo’s Deluxe Supreme Banquet Hall. “It’s a real classy joint” Rizzo says. (Eh, they’re tourists, what do they know.) Enjoy DJ-style party lighting, fancy decorations, and the perfect blend of the best party hits of the 1970s and 1990s and no other decades. Oh, and did I mention the dance floor? Seriously, this really is a great spot for families to kick back, enjoy the cool AC while the kids burn off some excess energy on the dance floor.

This is a big one. At the other Disney theme parks, especially EPCOT, you can’t throw a stone without hitting an amazing counter service dining option. Hollywood Studios on the other hand, is not as lucky. Don’t get me wrong, there are some great full service options, like Sci-Fi Dine In and 50’s Prime Time Diner (if you can get a reservation that is), but when your other options are ABC Commissary and Backlot Express, suddenly PizzeRizzo’s not sounding so bad is it?

PizzeRizzo is surprisingly larger than it looks, with plenty of available seating. Many folks don’t even know there’s additional seating upstairs so it’s usually quieter up there. I almost feel like I shouldn’t be sharing these secrets with you all, because I enjoy my peaceful meals upstairs by myself. But hey, Rizzo’s gotta eat too, and I’m sure he’ll appreciate the business.

Sure, the park has gotten more options recently, like Docking Bay 7 and Woody’s Lunch Box, but those places are BUSY! Why not kick back, relax, and enjoy the fine dining experience of The Riz, where the AC is always pumping and the food is… let’s say, more edible than you probably think!

Obviously this is the main reason that PizzeRizzo gets a bad rap. Sure, you may see the photos and think… “Is that too much crust?” But what if I told you, and you may want to sit down for this, the crust is the *best* part. To me, the crust is sort of like a good pretzel bread. It is well seasoned, has melted cheeses on it, and a good crisp on the bottom with a chewy center that keeps me coming back. And the toppings aren’t too bad either. 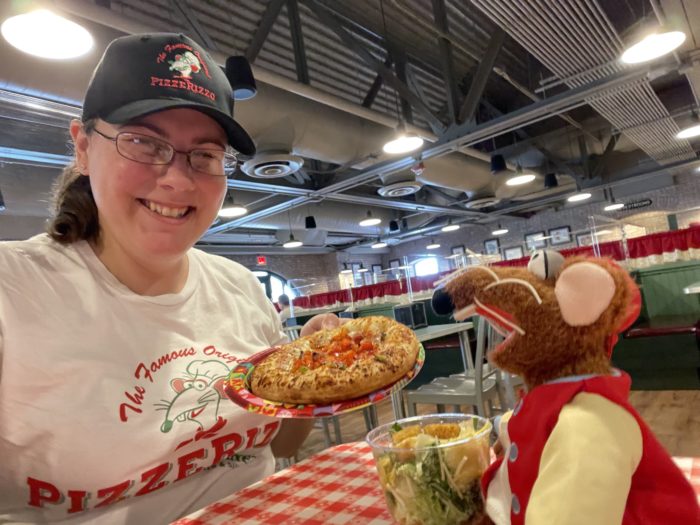 Look, the food is still WDW quick service fare, and may not be that special compared to some of the others out there, but it tastes great. I even love the small Caesar salad on the side. I find the cold lettuce refreshing on a hot day. Does that make me weird? Maybe. Here’s a secret tip from me to you, you can ask for additional Caesar dressing on the side, just in case it’s not Caesar-y enough for you! You can keep that. Take that to the bank.

I also highly suggest ordering yourself the cannoli to go along with your meal. Growing up I always ordered a cannoli from my local pizza joint and it still makes me happy. You can’t get any more authentic than that! 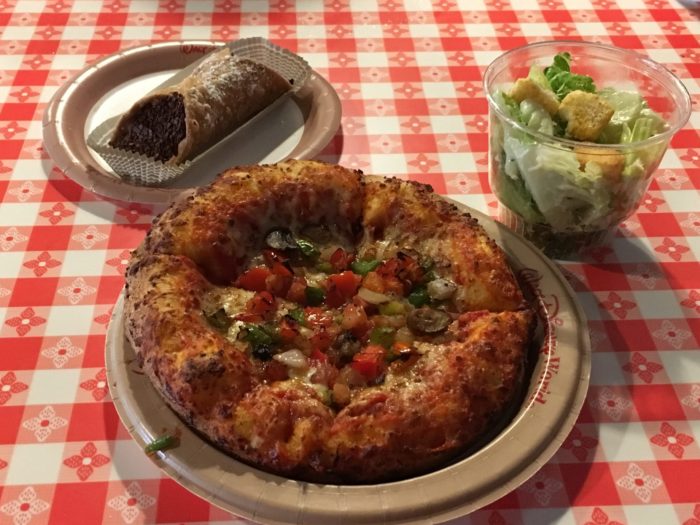 Believe or not, PizzeRizzo even offers seasonal cannoli options for me and my fellow foodies! 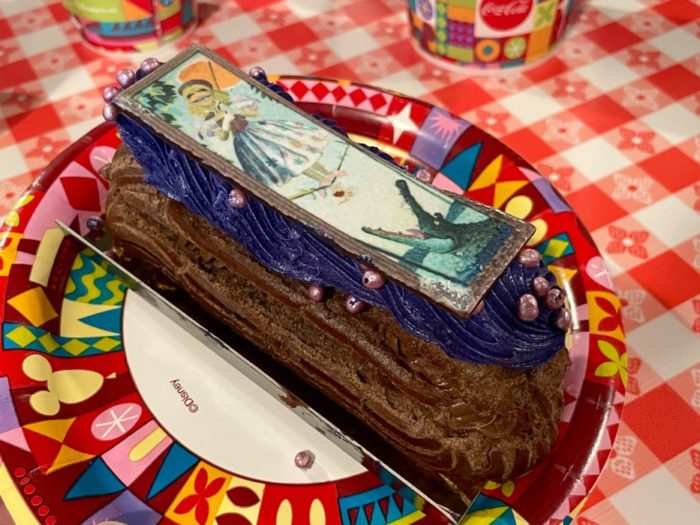 Is it New York style pizza? Not by a long shot. Is it the best pizza at Walt Disney World? Not even close. But, I would argue that it’s not the worst! I do suggest we start referring to PizzeRizzo food as “pizza” though, with the quotations, because it may be that in name only. Maybe…just maybe, it’s something even better, like a glorious pretzel bread roll with pizza toppings in the middle. In any case, it’s delicious, and life is better when you’re eating at The Riz!

I say “It’s Rat Pizza” a lot on social media, but I wonder how many folks realize where it’s from? 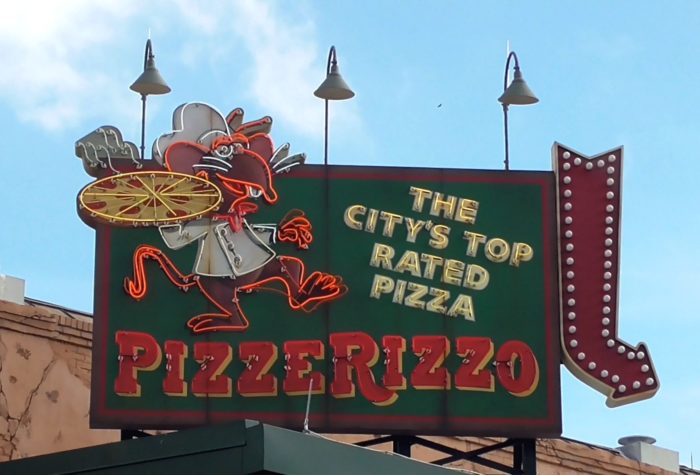 There’s a clever effect hidden in the large neon sign above the restaurant. While most of the time it reads “The City’s Top-Rated Pizza,” every so often some of the neon flickers out, revealing the words “It’s Rat Pizza.” This is a great effect when seen at night. 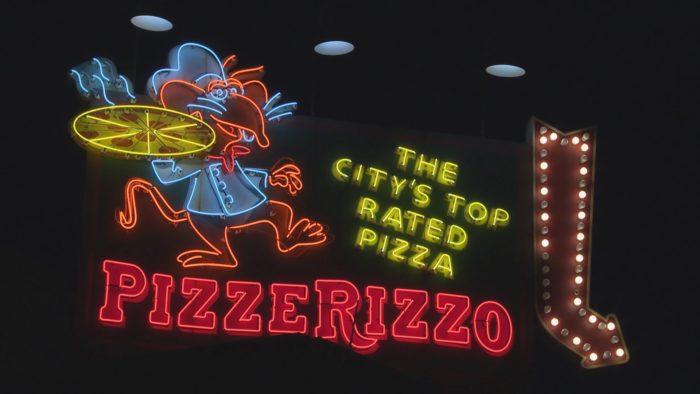 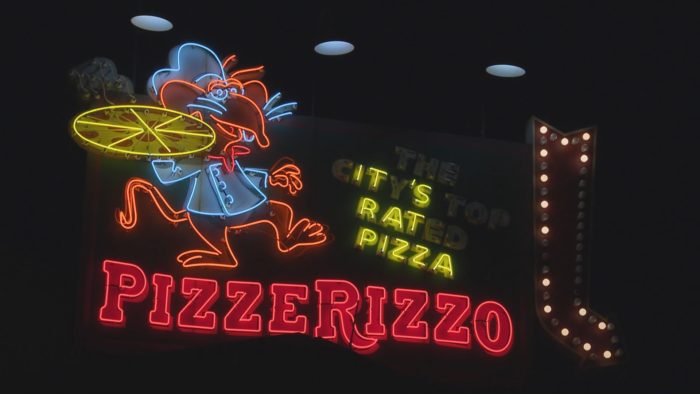 Not good enough for you, if you look at the adverts and signs for PizzeRizzo, even the phone number has “Rat” hidden in it: RA7-4996. 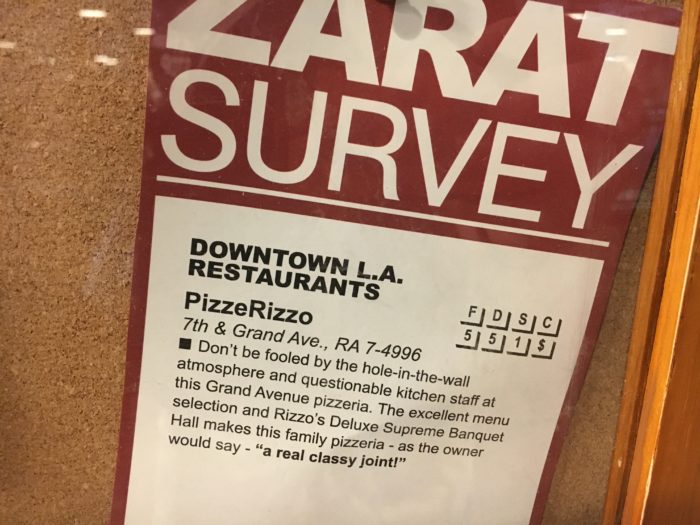 HONORABLE MENTION – The Merchandise (We Used to Sell)

I would be remiss if I didn’t mention this, because if they actually DID sell the merchandise seen in the glass cabinets as you enter PizzeRizzo it would be more popular than those Monsters University hats that for some reason are still flying off the shelves. Shirts, hats, mugs, Frisbees, and yo-yos, all sitting there, mocking me, with a little plaque that reads: “Rizzo’s showcase of advertising stuffs we used to sell.” 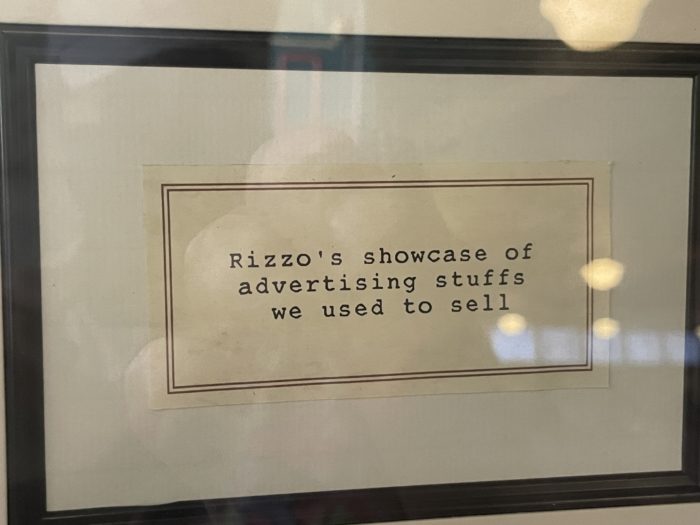 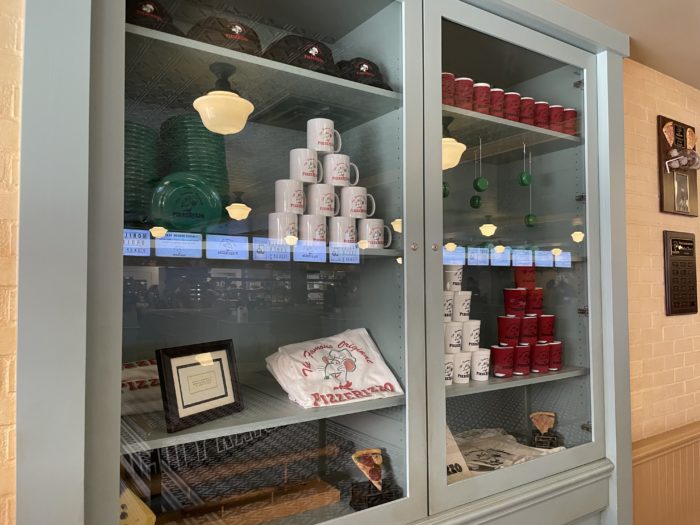 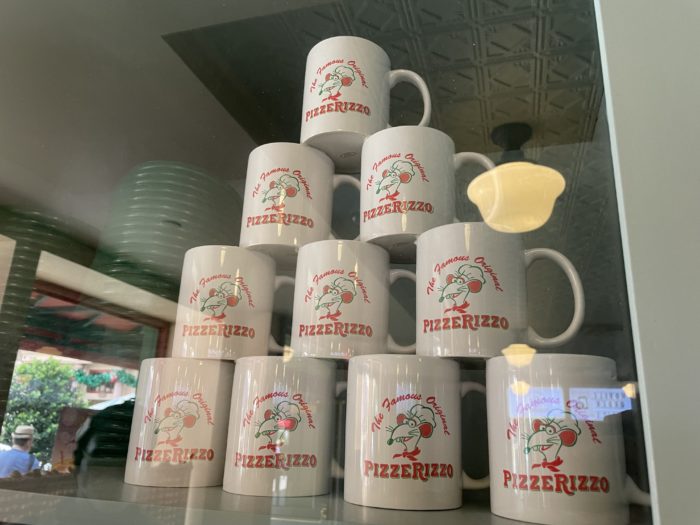 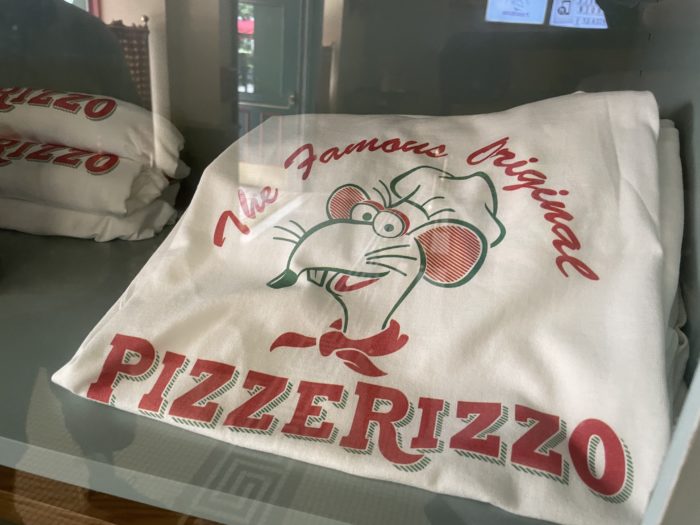 Keep your eyes open for the PizzeRizzo garbage cans. While the trash cans at the parks are more well known for being overflowing with garbage, the only things PizzeRizzo’s cans are stuffed with is funny one-liners from Rizzo himself! 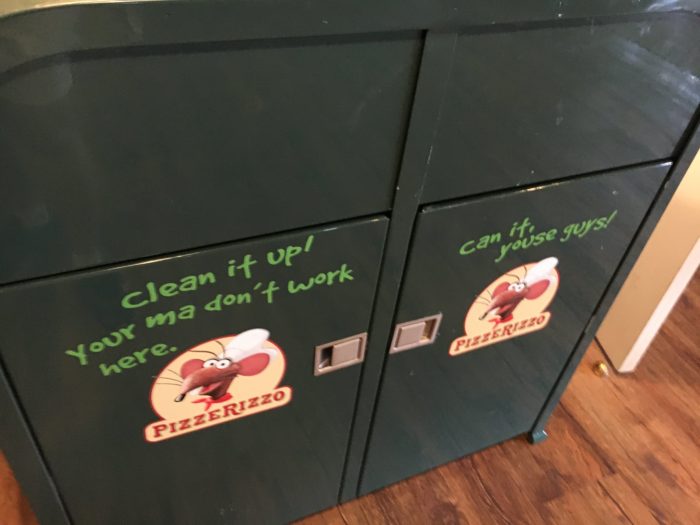 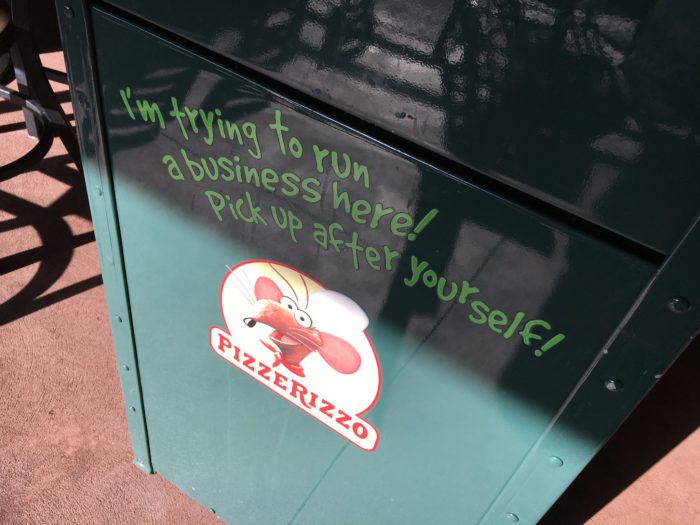 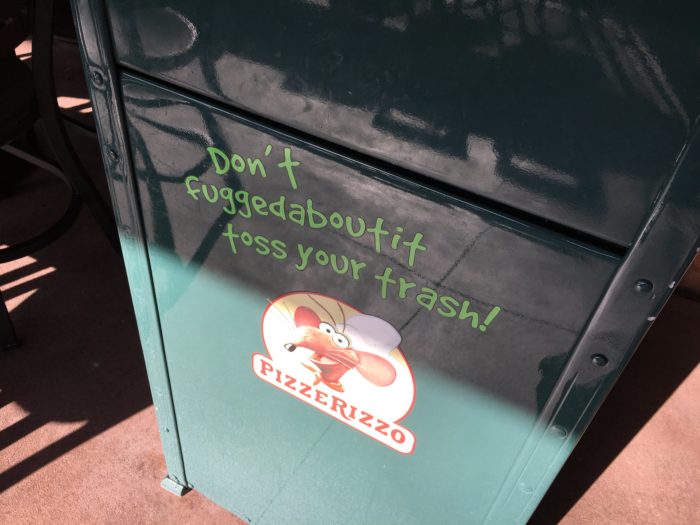 DEREK BURGAN – Wow! Thank you Alicia for such a compelling argument!! Readers can follow Alicia on social media via @AliciaStella. She also does incredible work for Orlando Park Stop – legitimately Must Read work on theme parks – along with a YouTube channel with over 50,000 subscribers!

So there you have it: Theme Park Hills To Die On – Vol 2. PIZZERIZZO! See you next weekend for the latest installment of the SATURDAY SIX, where we’ll look at something fun from the world of Disney and Universal. You can also follow Your Humble Author on Twitter (@derekburgan). 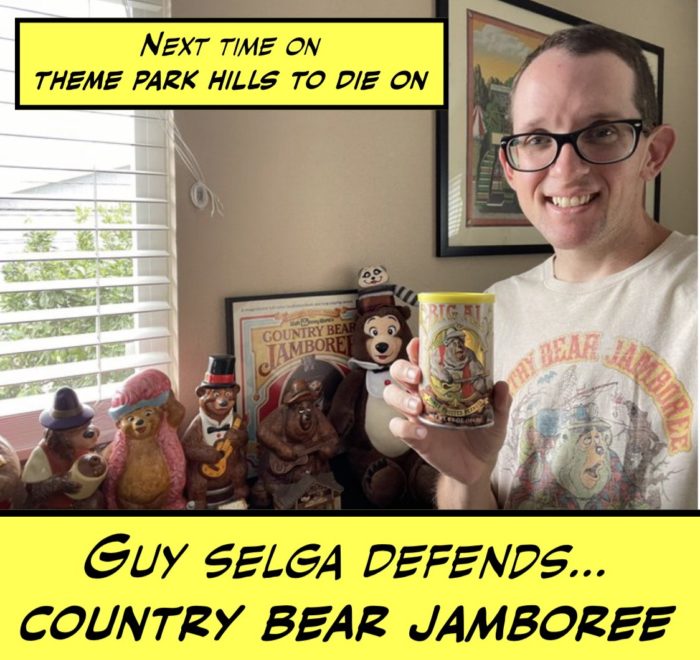