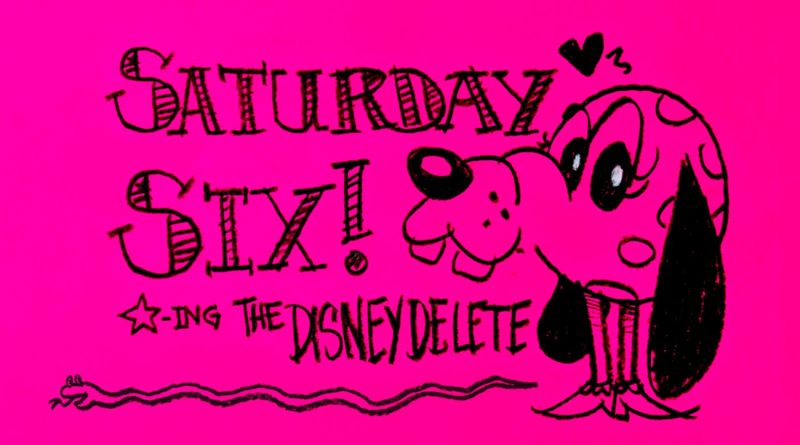 This week’s SATURDAY SIX takes a look at the Subversive Art of @TheDisneyDelete! As part of the theme park community, one of the things I love the most is to see regular fans like you and me take inspiration from the Disney and Universal theme parks to create their own art. Earlier this year we did spotlight articles on some of our favorite artists including Sam Carter, @SonderQuest, Brian Cooper, and Shelby Denham. More recently we took a look at how Universal’s VelociCoaster sparked the imagination of many artists. Today we are going to look at the work of one of the most unique, subversive, and brilliant artists I have come across in the theme park universe, a man known only as The Disney Delete.

Known for his association with The Disney Goofball (a giant sized golf ball with the face of Goofy with a snake on his head), @TheDisneyDelete was a lifelong Disney fan who never got to visit a Disney theme park until he was 18. He spent his entire childhood yearning, dreaming, and ingesting every single, book, videocassette and tv special about the Parks that he could get his hands on. This obsession also gave him waaaaaaay too much time to imagine and create his own versions of what was there — a highly lucrative hobby that continued for the next two decades and until this very day.

NOW REVEALED! The mysterious origin of The Goofball explained!

@TheDisneyDelete: “I first encountered the glorious Goofball while reading an old issue of Storyboard Magazine (a short-lived animation collector’s magazine from the late 80s/early 90s). In among a long winded, semi-braggy article about the author getting to attend the opening of Disneyland’s Toontown was this random picture of this insane looking character. So being the cartoon connoisseur that I am — not to mention an attention…er, *courtesan* — I immediately scanned the picture and put it on the internet.”

@TheDisneyDelete: “The internet was as happy/horrified as I was, and the thing took off! Deciding to hitch my wagon to a winning racehorse, I began to Photoshop Goofball into weird situations, make dumb merch ideas out of him, make dumb *real* merch out of him, and, eventually, draw over 100 pictures of him using crayons and construction paper… the tools of a true artiste! At this point, I think I own the copyright by the rules of common law marriage and/or squatters rights. That said, if Disney ever wants to use him again, all that I request is a gajillion Disney Dollars. Hit me up, Chapek!”

Readers of this fine blog series know how much we love the Disney’s Sing Along Songs series, as we have reviewed all the versions which were filmed at the Disney parks (including Disneyland Fun, Campout at WDW, Happy Haunting, Flik’s Musical Adventure at Animal Kingdom, and Beach Party at WDW). @TheDisneyDelete used his art skills to create the cover of a new edition of Sing Along Songs titled “Under New Management: Rehabs ‘N’ Overlays.” This Sing Along Songs would feature “hits” from Disney attractions which had changes that many guests weren’t happy with, including The Enchanted Tiki Room, Journey Into Imagination, and even Disneyland’s infamous Rocket Rods. 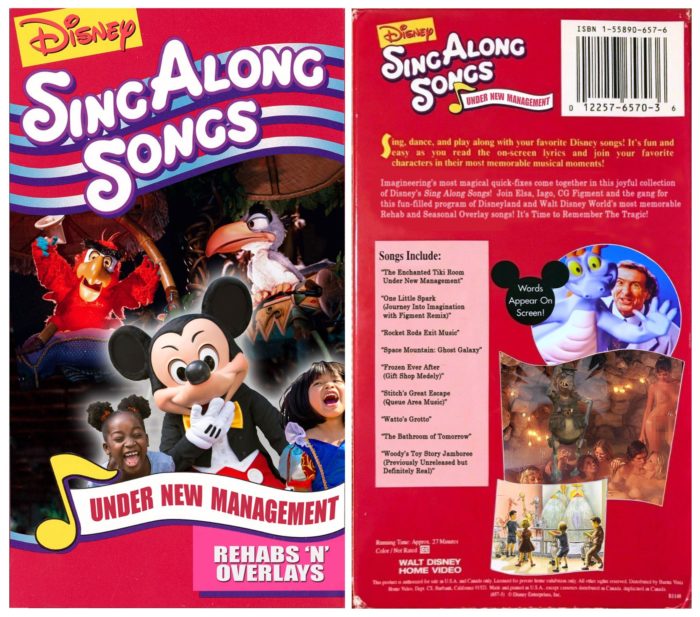 This is what we call thinking “outside the box.” The absolutely bonkers story of the audio animatronic character Buzzy being possibly stolen from the Wonders of Life Pavilion in EPCOT has been referenced in the SAT SIX several times over the past few years (mostly in meme articles because the actual details are too insane even for the annual Theme Park Turkey of the Year awards). @TheDisneyDelete took the story and added his unique creative touch by making a milk  carton that features the image of a “missing” Buzzy. Even better? You’ll be able to make your own… 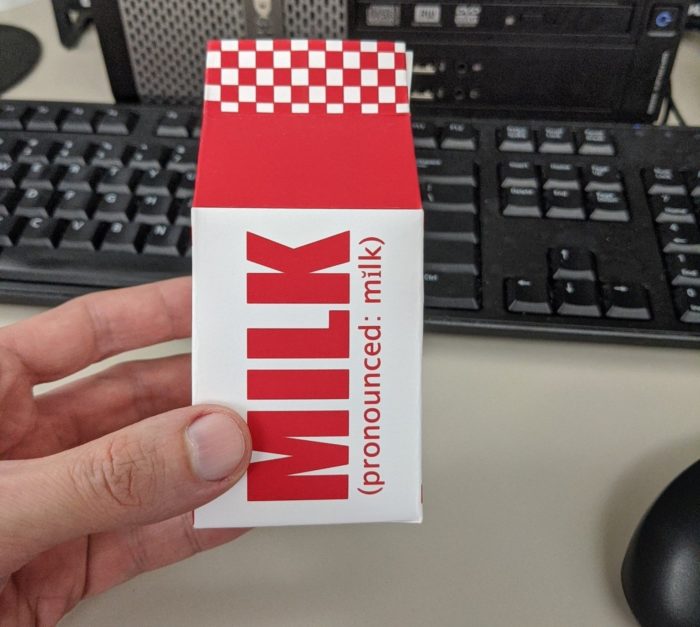 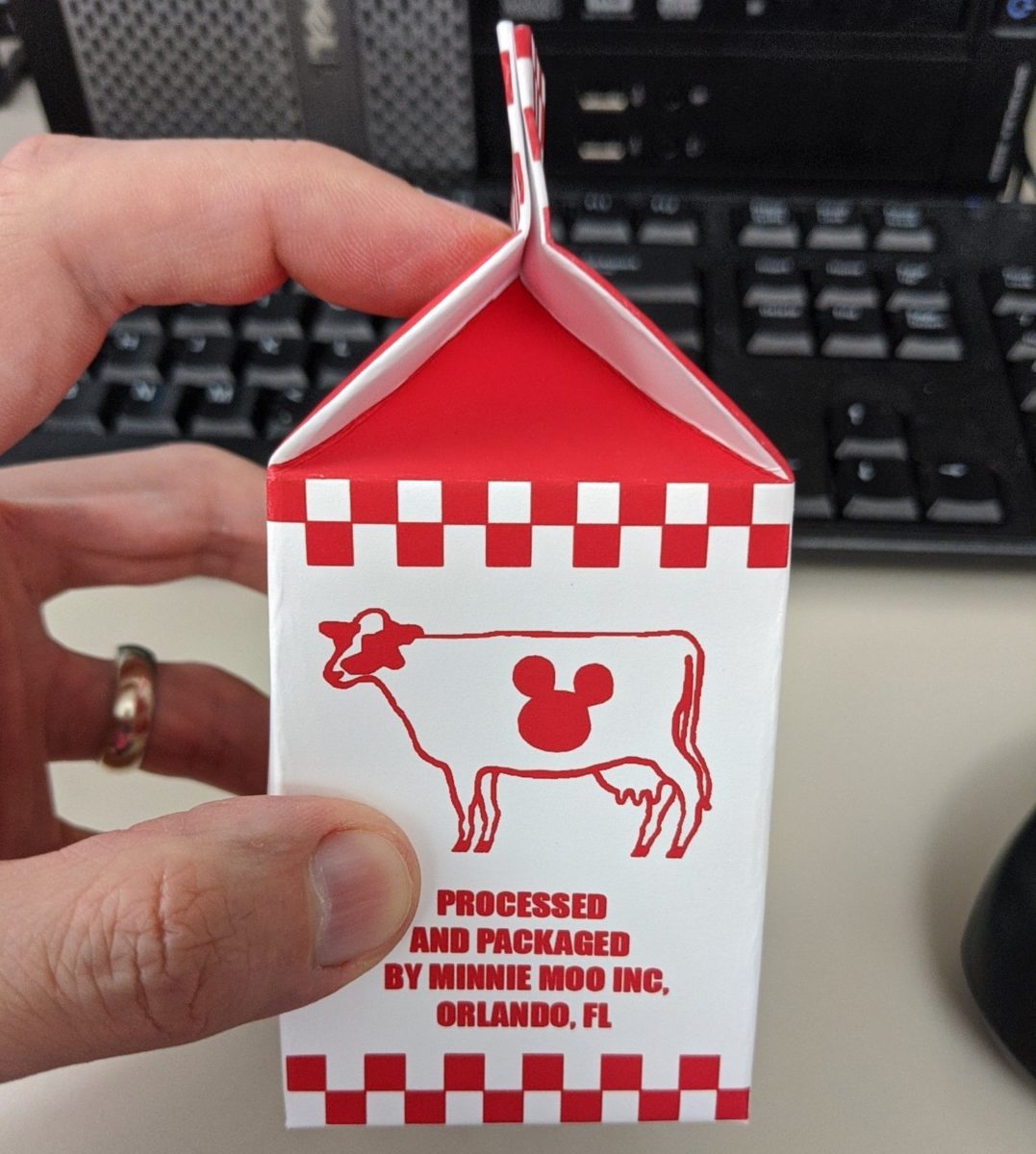 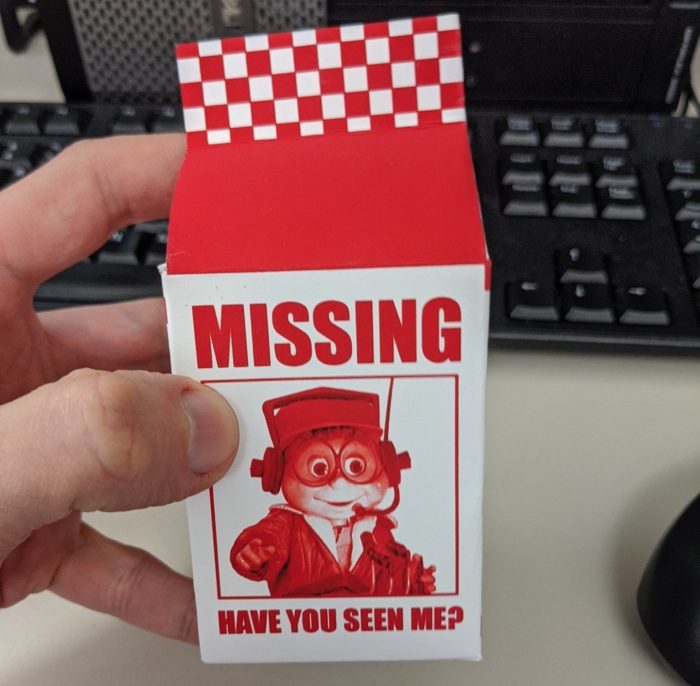 Print out the following template and make your own milk carton! 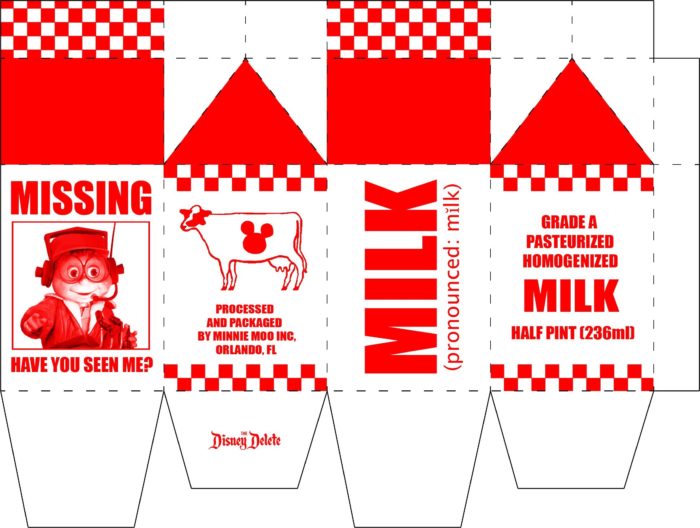 Recently @TheDisneyDelete took pen to paper and created some fun park maps that were created “from memory” that are filled with some wonderful details.  First up, Walt’s original park: Disneyland. 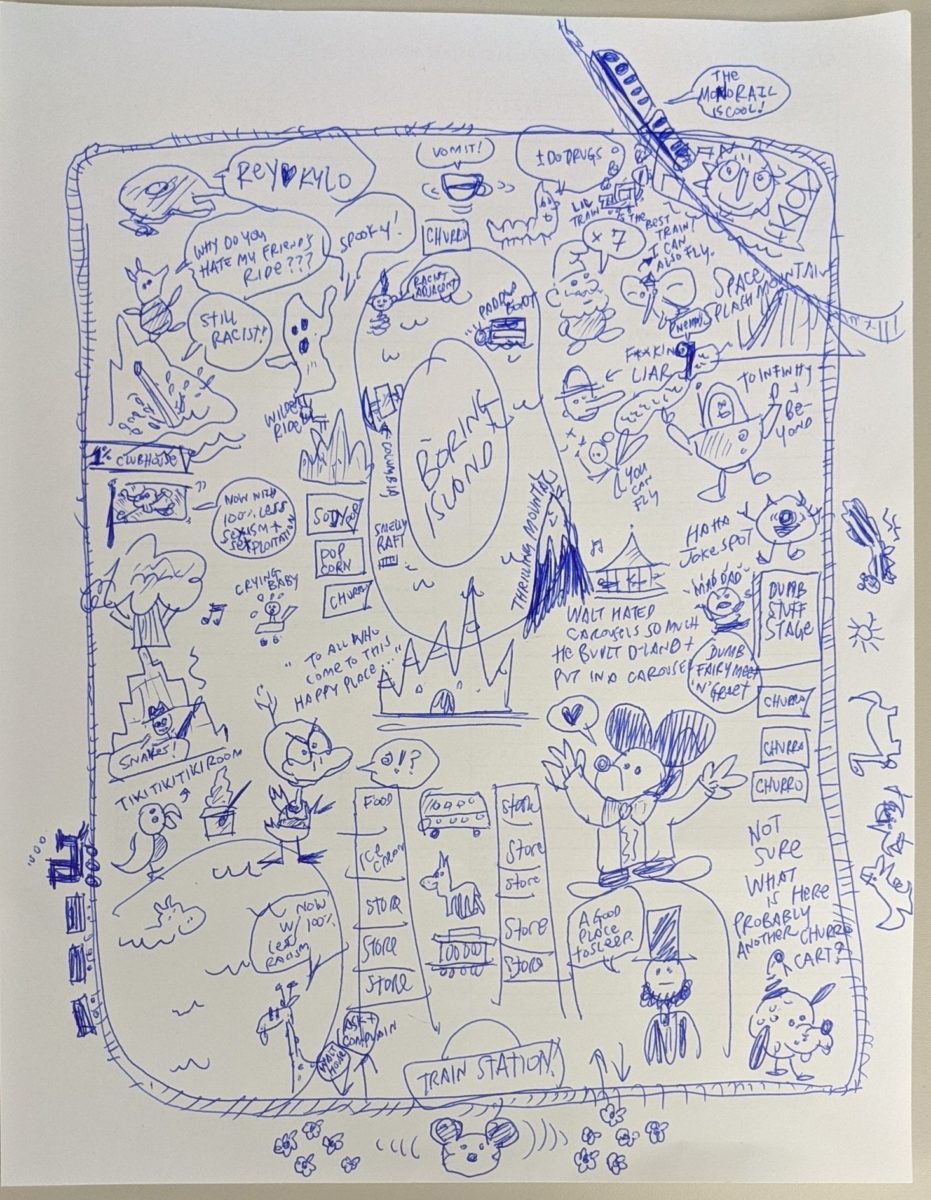 The EPCOT drawing is also loaded with wonderful details, including referencing both the original IllumiNations: Reflections of Earth along with the hideous monstrosity that will soon be Harmonious. 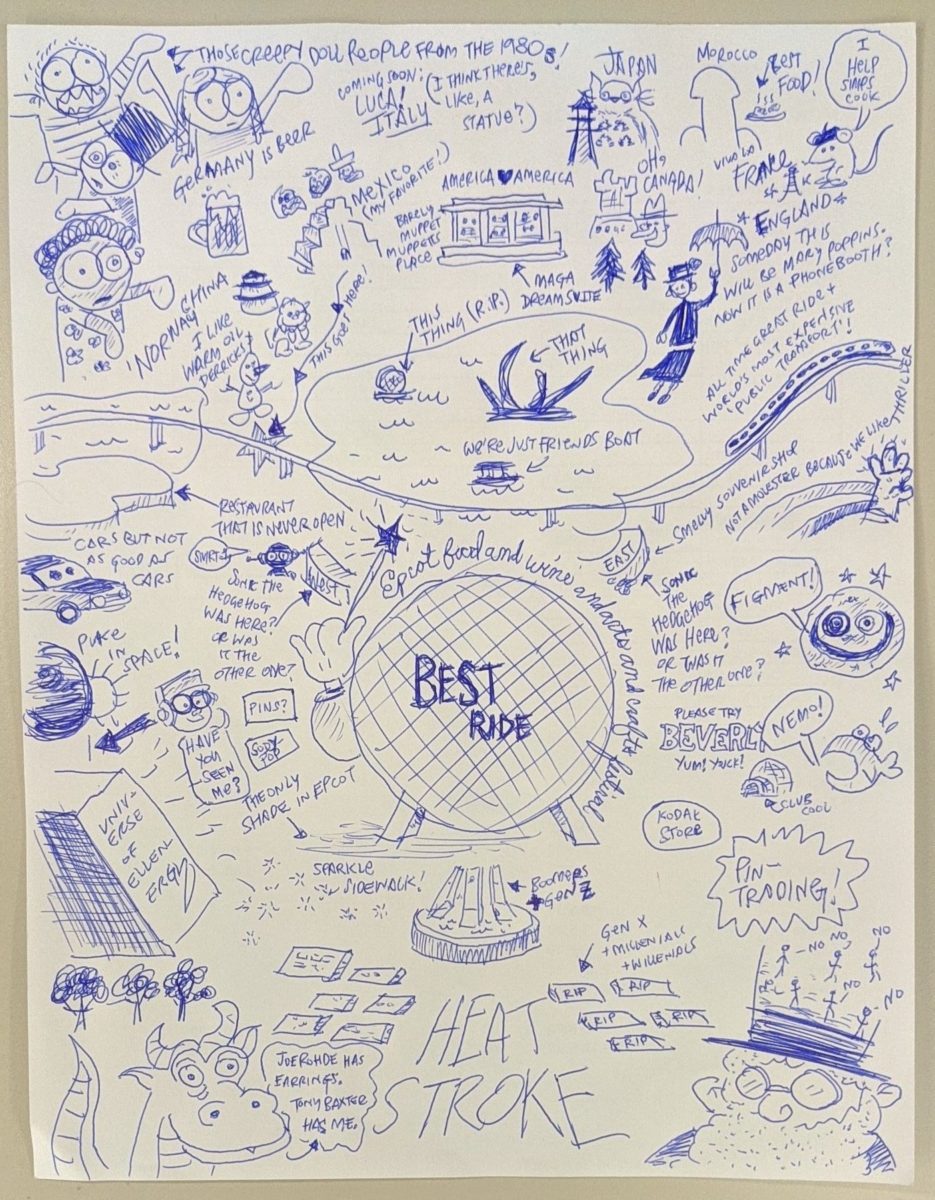 A while back I was minding my own business, scrolling through Twitter and came across this picture by @TheDisneyDelete that takes a  Disneytwist on David Bowie’s appearance as Ziggy Stardust. This is an idea so crazy that I can’t believe someone even had it, let alone take the time to bring it to life. In a single word? Masterpiece. 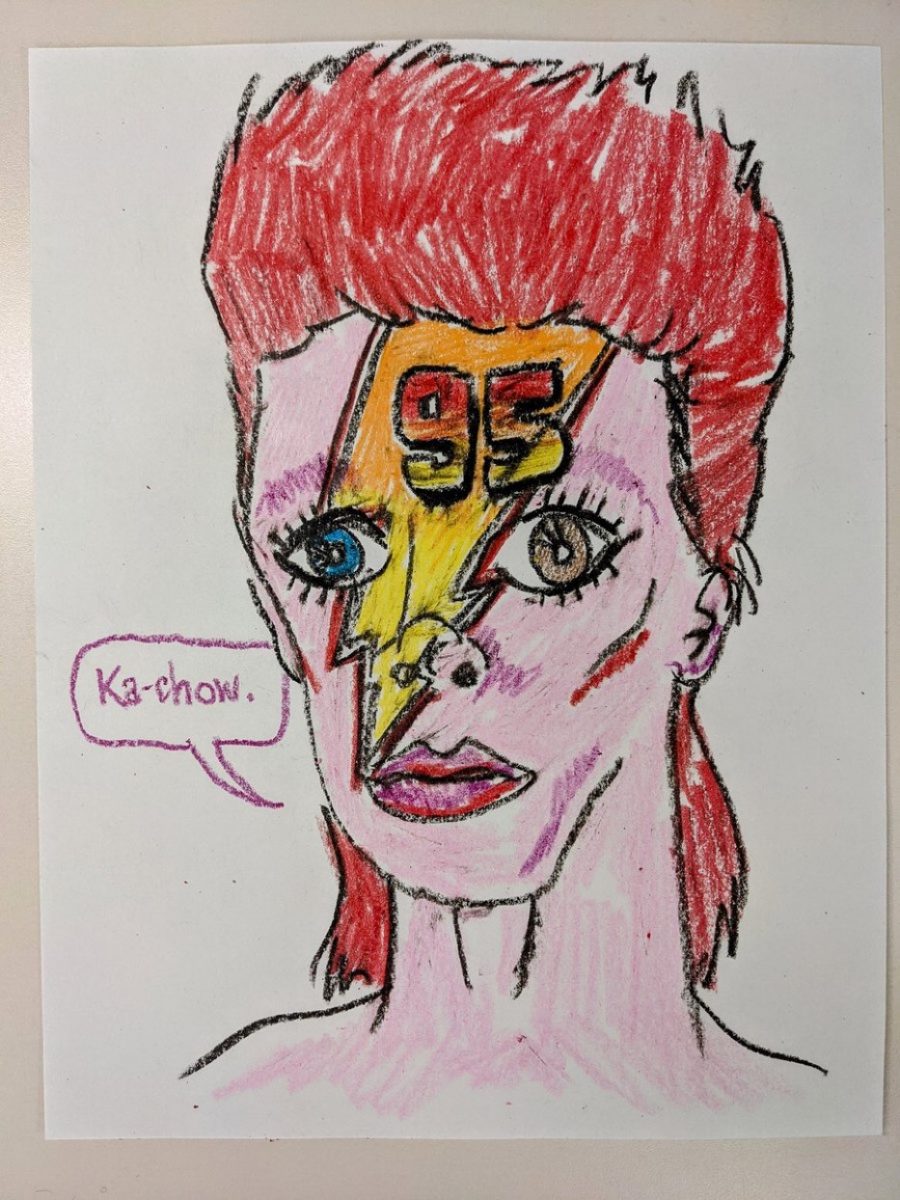 …and was soon joined by several others. 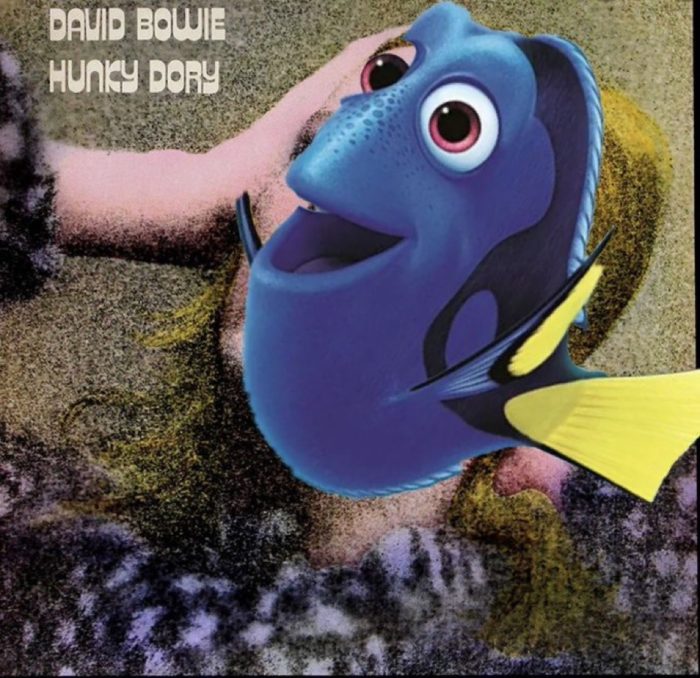 Like @TheDisneyDelete, I grew up during an era when Halloween costumes were nowhere near as elaborate as they are today. There was no Spirit Halloween stores when I was growing up, just stores selling cheaply made masks that were held onto your face via two staples and the cheapest rubber band in existence. Yet when I put on that piece of cheaply made plastic, 6 year old me was transformed into the Hulk, Spider-Man, and Han Solo. It didn’t matter how awful the actual mask looked or how dangerous it probably was to children, I loved it. 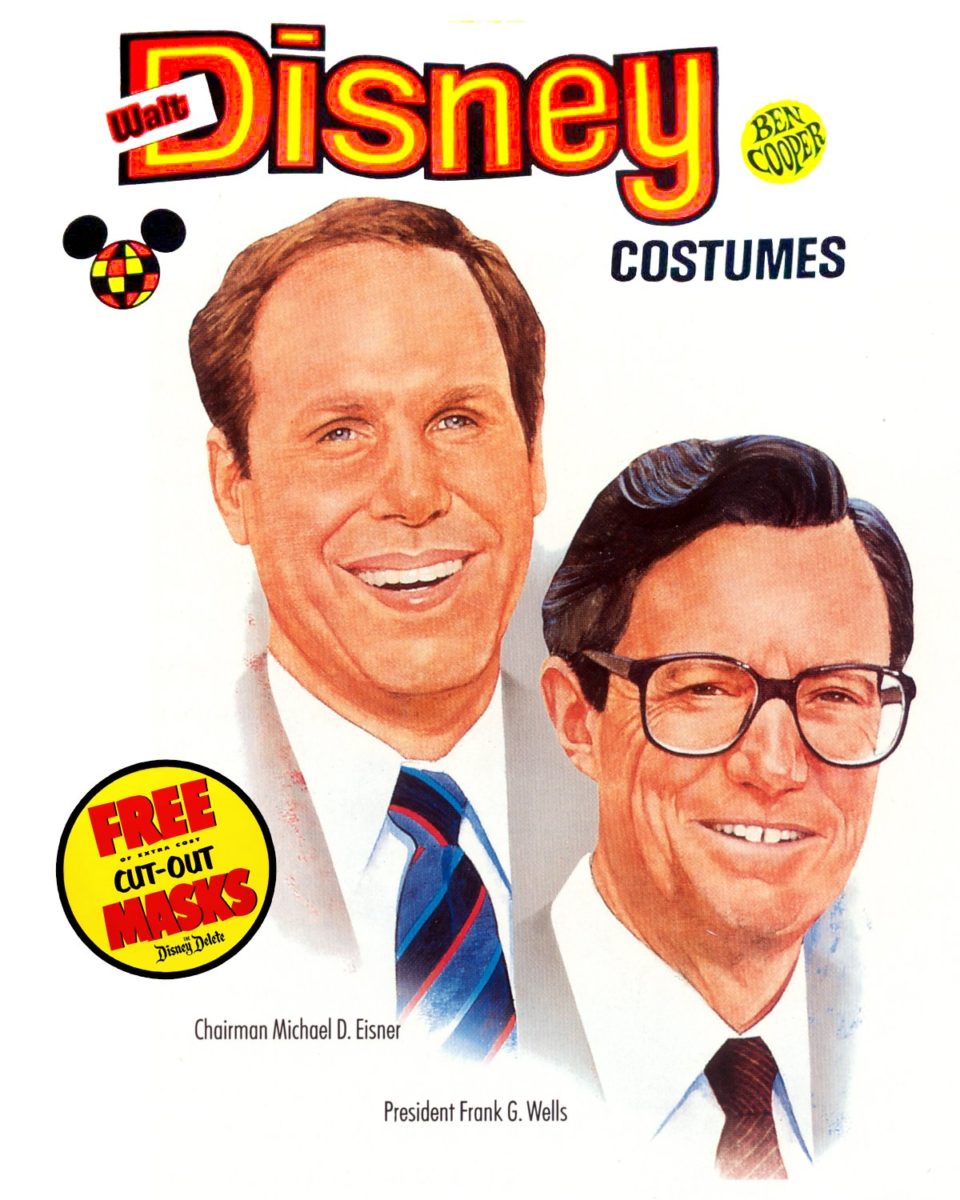 Complete your Michael Eisner ensemble with this name tag. This Halloween, be sure to go to every house and say, “Hello.” 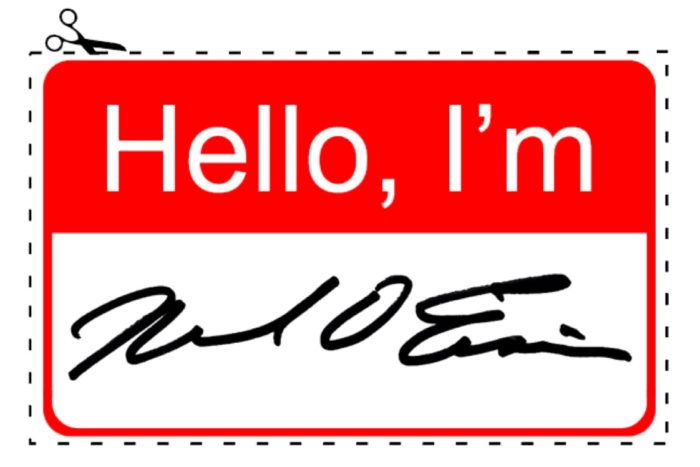 This may be the first piece of merchandise created for Frank Wells in the history of the theme park fan community. Now you too can play out reigning in Michael Eisner’s ideas that are just too “out there.” 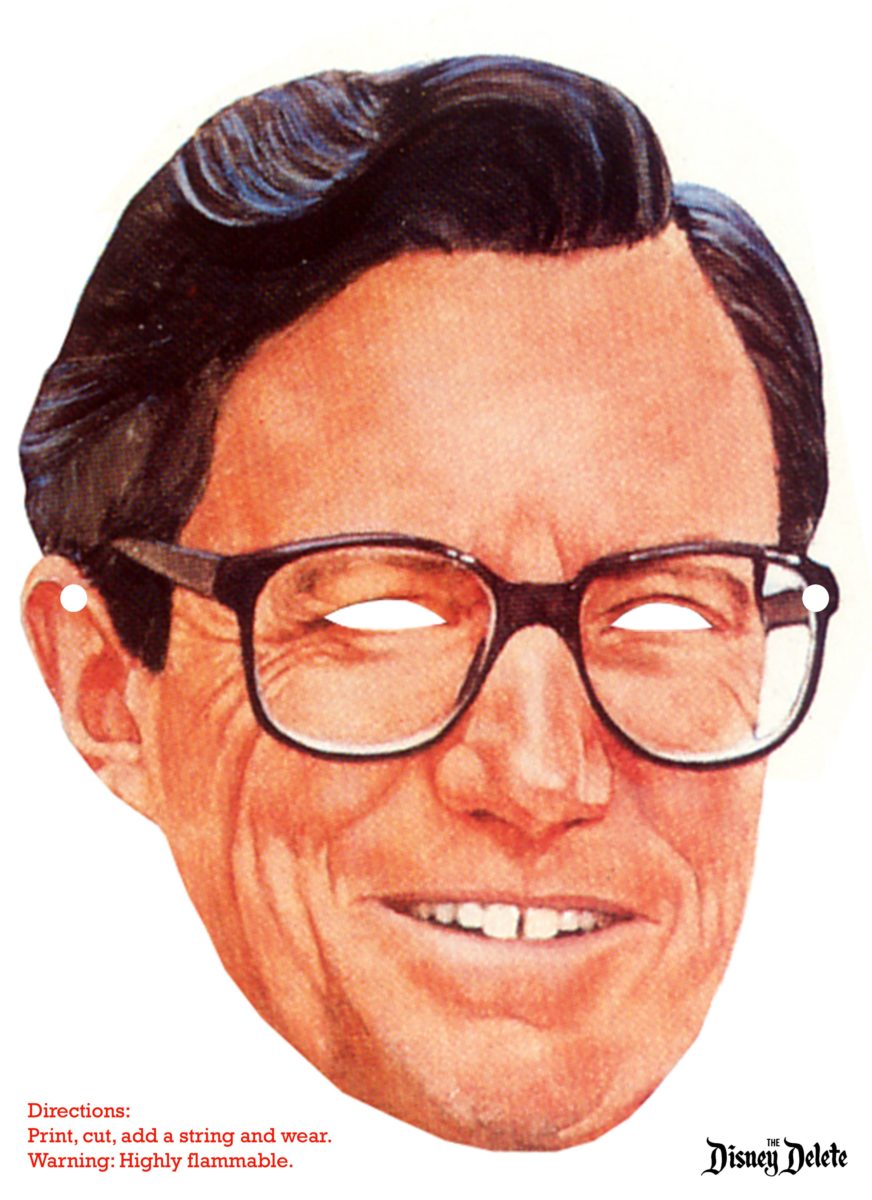 One of the truly amazing things that @TheDisneyDelete does is offer Fun Packs to his followers on social media. These are essentially grab bags  of awesomeness for theme park fans. Let’s take a look at the “Rainy Day Activies” fun pack that I ordered recently.

Everything in this fun pack was gold, but when you have your own pog? My heart grew three sizes that day. 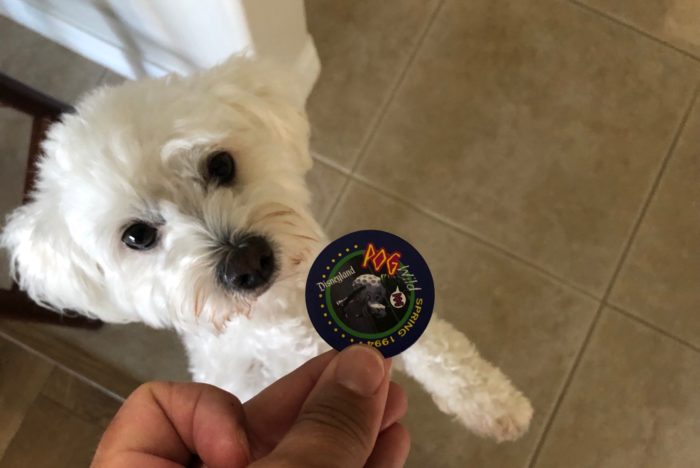 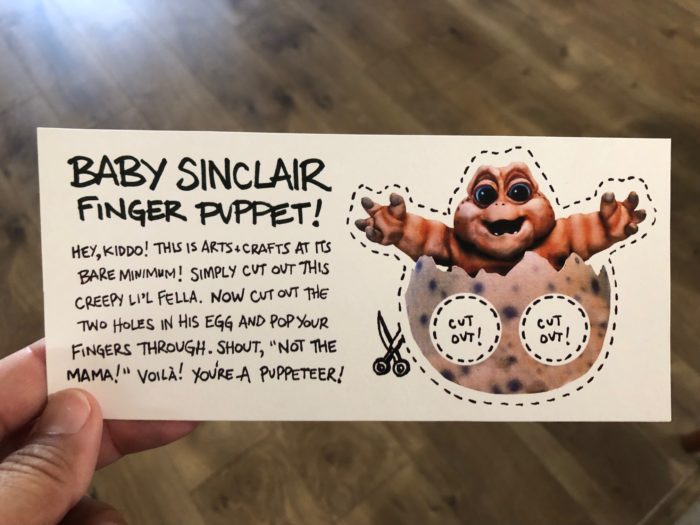 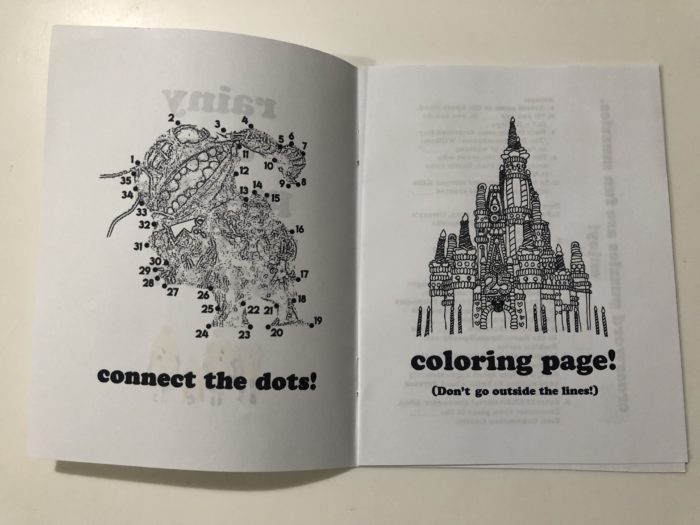 Here is a look at a Fun Pack that was titled “For Eisnerders Only.”

You have to love the DIY Michael Eisner watch.

Here is what was included with the “DUCKS” Fun Pack. 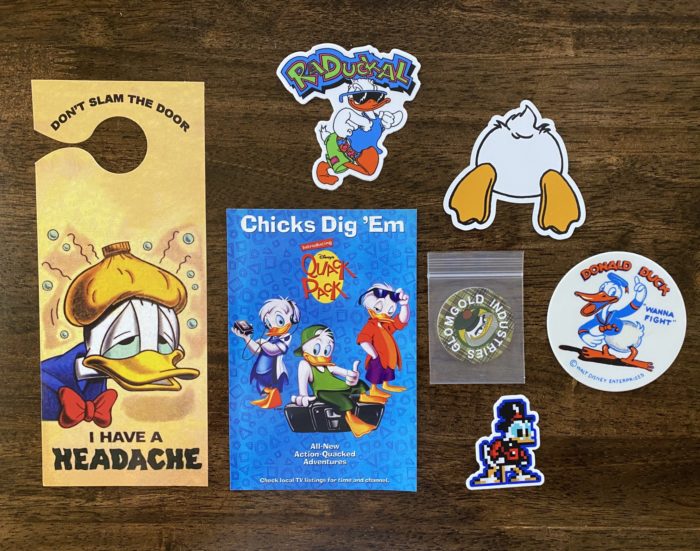 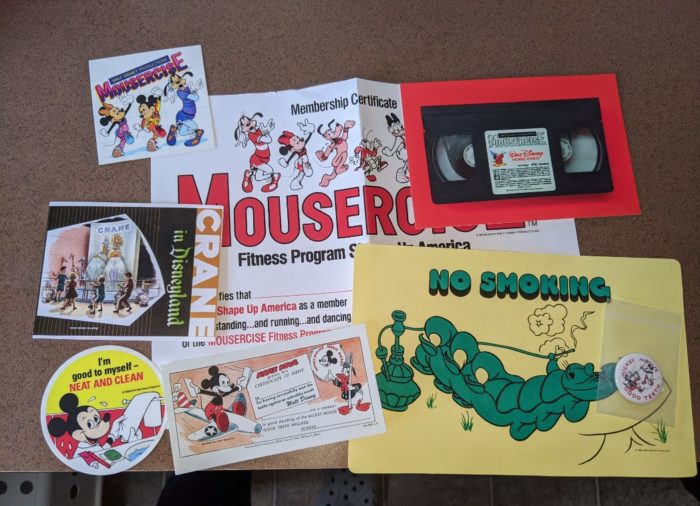 The “Not Worth The Paper It Is Printed On” Fun Pack.

How can YOU get a Fun Pack? Easy, be sure to follow @TheDisneyDelete on Twitter and keep your eyes open for when he offers a new Fun Pack. Here’s what some of the previous ads looked like… 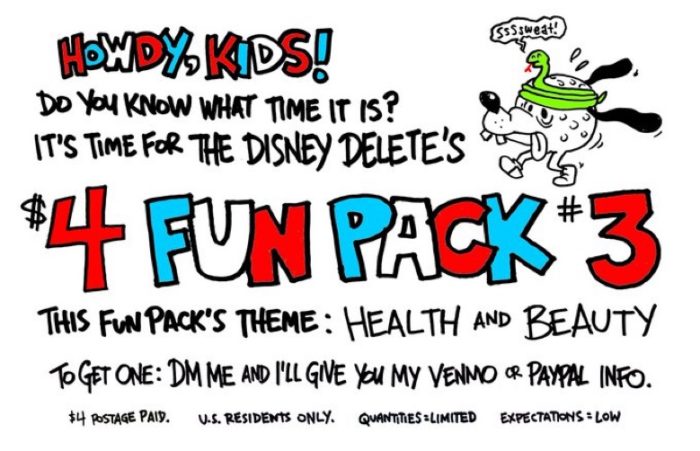 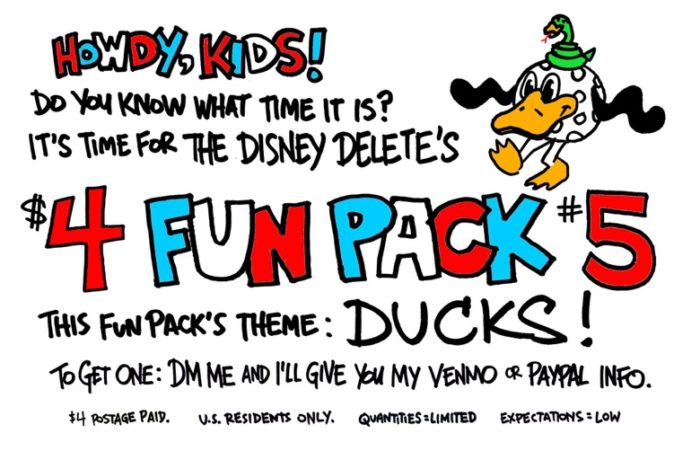 How can you not fall in love with a Pat the Bunny-like book that uses the “touch & feel” concept using Disney Imagineers instead?! Just pure genius. 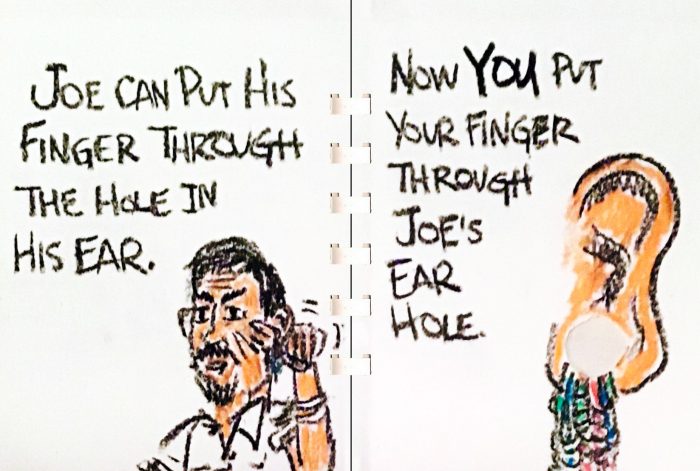 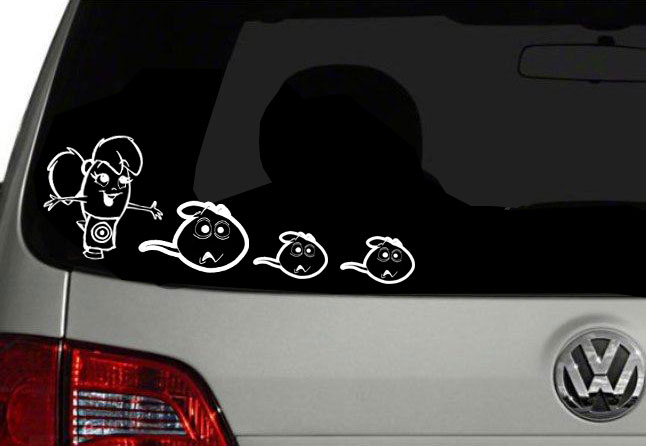 So there you have it: The SATURDAY SIX Presents – The Subversive Art of @TheDisneyDelete! See you next weekend for the latest installment of the SATURDAY SIX, where we’ll look at something fun from the world of Disney and Universal. If you enjoyed yourself, be sure to check out The Magic, The Memories, and Merch! articles covering the latest from the Disney Outlet Stores. You can also follow Your Humble Author on Twitter (@derekburgan).