While this sleepy Scottish village isn’t anywhere near as teeming with the kinetic energy or the sheer number of Easter eggs as its Universal Studios Florida counterpart is, it nonetheless has a pervasively charming aesthetic – and more than its fair share of little magical touches and overlooked spots. This is my list of the four best – that is to say, the ones that I think will make the biggest difference or have the biggest impact on your next vacation. (Feel free to add your own in the comments below, such as, say, Moaning Myrtle in the conveniences or the fully animated Marauders’ Map in Filch’s Emporium of Confiscated Goods.)

1. Get Lost in Hogsmeade’s Storefronts 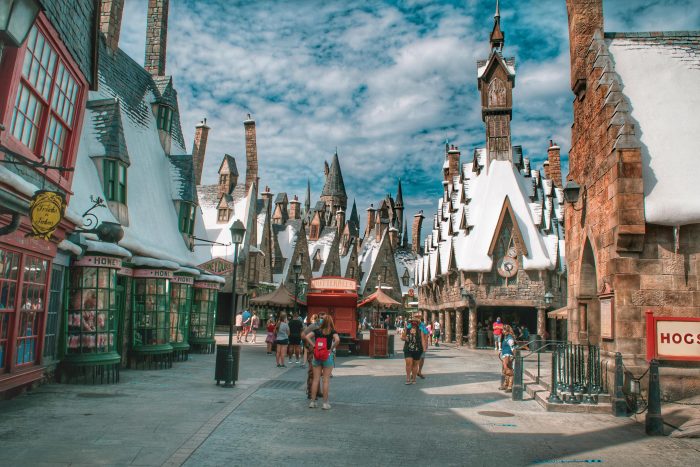 The curved main street of Hogsmeade Village is one of the most beautiful sights in all of Universal Orlando Resort, with its cobblestone road and haphazard shop windows. Ironically, it may also be, given its well-trodden status as the theme-park land’s main artery of traffic, one of its most overlooked aspects.

Stopping and taking in all of the many wonderful details that are to be found in the various storefronts is an enterprise that can easily take hours of your time – and yield lots of rewards. A replica of Hermione Granger’s Yule Ball dress is proudly on display in one; at another, you can find a Howler, a magical letter that, well, howls the sender’s displeasure at its recipient. (It plays several different messages, each from a parent to a student who’s in one type of trouble or another.) At Scrivenshaft’s Quill Shop’s window, you can watch a quill record the names of newly born wizarding babies, while over in Spintwitches Sporting Needs, Quidditch equipment struggles to break free. (There’s even some sonic immersion – the sound of dishes being washed between Honeydukes and The Three Broomsticks, or a Mandrake incessantly squealing away at Dogweed and Deathcap.)

It’s hard to find a better way to get completely absorbed in Harry’s wondrous world – and that goes double if you do it at night, when the storefronts are beautifully lit.

2. Sit a Spell at The Three Broomsticks’s Back Patio 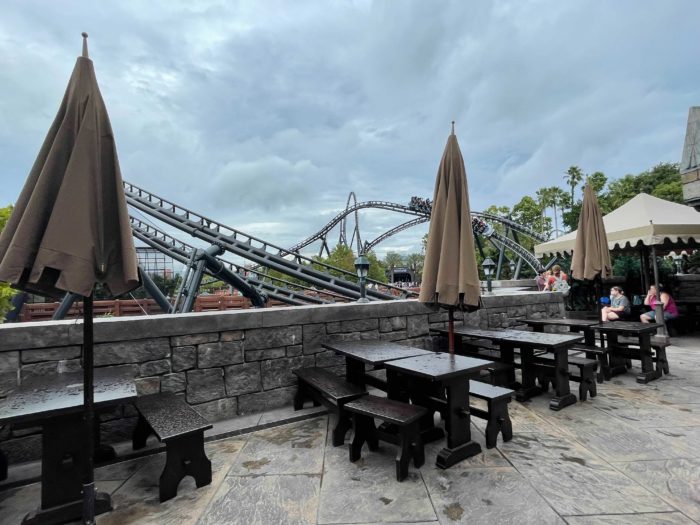 In times past, the back patio “hidden” behind The Wizarding World of Harry Potter – Hogsmeade’s restaurant was something of a secret, a secluded and relatively quiet place where you could contentedly eat your food or just enjoy the sweeping view from across Islands of Adventure’s lagoon.

Today, this little slice of tranquility has been a bit subsumed by the sheer commotion that has been steadily descending upon the theme park. During the day, a number of riders waiting for their virtual-line return time for Hagrid’s Magical Creatures Motorbike Adventure tend to park it in this little area, while at night, some viewers use it to watch the Hogwarts Castle projection-mapping show (when it’s in operation, that is). And then there’s Jurassic World VelociCoaster, the mammoth roller coaster whose track nearly butts right up against the spot’s railing, requiring the installation of some greenery to try and mask its presence (which really does nothing to hinder the riders’ screams as they whiz by, unfortunately).

Still, even with the comparative congestion, the back patio of Three Broomsticks is a not-to-be-missed oasis, a great little spot to collect your breath, enjoy your Butterbeer (frozen, of course), and soak up a little peace in the busy Wizarding World.

What may not be as well known, however, is the effect these projection-mapping productions have on the surrounding Hogsmeade attractions. As the crowds gather in front of Hogwarts (and, even, on Three Broomsticks’s patio), they empty out of the queue for Harry Potter and the Forbidden Journey, which is located inside the iconic castle – meaning you could potentially make one of the most popular rides at Islands of Adventure a walk-on. The same is also true for the next-door Flight of the Hippogriff, which, yes, may only be a kiddie coaster, but which is simply sublime to ride when one of the light shows is going on – you’ll be hard-pressed to have a better experience at the entire resort, hands down.

(We should probably note here that these two attractions aren’t always in operation when one of the Hogwarts Castle performances is under way, but worry not – you can always stand back with the rest of the crowd and take in the sights and sounds that envelope the building.) 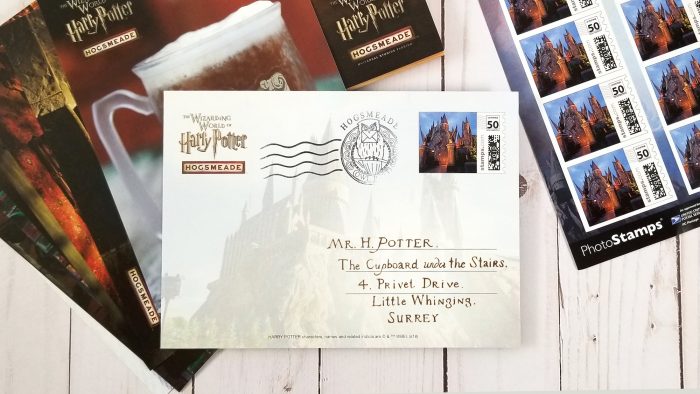 Just as Diagon Alley has an Owl Post, which allows you to mail certain wizarding souvenirs back home in some rather snazzy packaging, Hogsmeade offers the same – but with a small twist that is arguably even better, given that it’s free and all.

Well before the service started up, witches and wizards were able to take their letters or postcards to the first Owl Post and have the items be stamped with a special Hogsmeade postmark – and then dropped in the mail for them. In this way, it would truly look as if the parcel came from Hogsmeade Village, which presents a special little keepsake of its own for whoever the receiver is. (And, of course, Universal would only be too happy to sell you the postcards, stamps, stationary, and whatever else you may need to get the postal deed done.)

And here’s a little tip for you: you can ask the wizarding employee to stamp all of your postcards, even the ones that aren’t getting mailed that day. That makes a special keepsake for yourself, as well, meaning everyone gets a little taste of the magic.

What are your must-do stops at The Wizarding World of Harry Potter? Let us know in the comments.