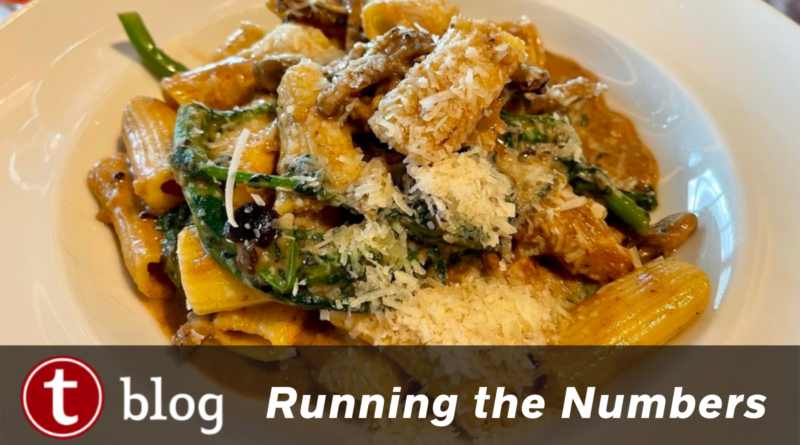 Do you have a favorite reservation that you try to get during every WDW trip? Recently, for my family, it’s Sanaa. We love staying at Animal Kingdom Lodge. And we LOVE that bread service. Butter chicken? I’ll eat that every day. What does that say about my taste? And what other reservations should I try to get, and will I be more likely to enjoy? I could pull overall popular restaurants. Or ones that I have a better chance of finding a reservation for. Or some that are a good value.

But what I’d really like to figure out is what people or parties like me also like. So where do other bread service fans go when they’re not at Sanaa? How can I put all of that powerful satisfaction data into the context of what I personally like? Let’s explore together and find good alternatives for the table service restaurants that currently have the most active Reservation Finder requests. In case you can’t get a reservation, at least you might have a good, data-drive backup option.

Just like in the counter service analysis from earlier this week, we’re using conditional probabilities. A conditional probability is the chance of something happening, given what you know about a prior event or outcome. So in our analysis today, that “prior outcome” is whether you liked a certain table service restaurant. We’ll use that information to calculate the new chance that you’ll like some other restaurant.

So what do we need to calculate? First, we calculate overall satisfaction at every restaurant at WDW. That’s our default. If we don’t know anything about you, those averages are going to be our best guess about what you could or could not like. I pull that information from every TouringPlans WDW post-visit survey.

But let’s say I do know something about you. Even if I have just one data point about you, that changes everything. Because that means I can filter all of that data to be more like you. For example, if you like STK Orlando (you are part of a pretty small crowd), I can pull surveys for just people that like STK Orlando. Now you could trust the results a little more, because the satisfaction scores at every other restaurant will be coming from other STK aficionados like yourself. You can ignore the taste of all of those STK haters.

I pulled conditional satisfaction scores for every table service restaurant, given that you gave a thumbs up to any other restaurant. There were 198 table service spots in my list. So that means I pulled 9,604 different satisfaction scores. I did 9,604 comparisons against the overall satisfaction scores to see if they were significantly different. If it wasn’t significantly different, no big deal. That means your STK fandom doesn’t impact whether or not you’re likely to enjoy Restaurant X. But if it does, things get interesting. What are the two types of interesting things we could find out?

Eat This, Not That

Not That: Hollywood & Vine

I’m going to go ahead and say the cuisine correlations aren’t what’s important here. Sci-Fi and Whispering Canyon are both … cheesy? In a good way, if that’s your thing. Bonus – Whispering Canyon has short-notice reservations available 67% of the time based on recent searches. On the flip side, if you’re all about that immersive theme like a drive-in, the character meals at Hollywood & Vine aren’t going to be appealing.

Not That: Be Our Guest

Topolino and Tony’s?! Stop the post right here. Topolino’s the very highest-rated restaurant on property right now. And Tony’s … is not. That was my first reaction. But take a step back with me. Topolino’s and Tony’s have similar cuisine – we’ll call it approachable vaguely Italian. They’re just worlds apart in quality and price. On the other hand, Topolino’s and Be Our Guest are both expensive. But one is the obvious winner in satisfaction. And the other is Be Our Guest.

Once again we’re positively correlating on theme-focused spots. Beaches & Cream and Rose & Crown are both meant to transport you to very specific themes. It makes sense to me to see them together even though those themes are different. But character meals and some other popular-but-below-average-satisfaction restaurants should be avoided.

Oh hey, do you like large amounts of food close to (but not) Magic Kingdom, in spots that are also really popular with families? Cool. ‘Ohana and Whispering Canyon are for you. But if you really really love those ‘Ohana noodles, don’t expect to find anything as Instagram-riot-worthy at H&V, CRT, or Tony’s.

Not That: None! There are no significant negative correlations with Chef Mickey’s

Alright, the Eat This list is a pretty odd mix. Interactive service with AYCE skillets. Fancy steakhouses. Noodles. Frontier buffet. Beast sightings. Maybe you all can enlighten me regarding these relationships in the comments.

Be Our Guest: 332 active reservation requests

Eat This: ‘Ohana and Jiko

Not That: None! There are no significant negative correlations with Be Our Guest

Interesting pair of correlations here. I love one of these restaurants, and I think the other is decidedly “meh”. I’ll let you guess which is which.

Eat This: Akershus and Chef Mickey’s

Not That: None! There are no significant negative correlations with Cinderella’s Royal Table

Not That: Tony’s Town Square

50’s Prime Time and Beaches & Cream seem like another thematic match made in heaven. And Prime Time and Whispering Canyon share intentionally faux-obnoxious service. Kimonos, though. That’s a curveball. And in my opinion, Prime Time does comfort food well, while Tony’s has really spotty quality.

Another positive correlation that I wouldn’t have made myself. California Grill and Boma have decidedly different atmospheres, but both have high-quality food. The negative correlations are pretty solidly mediocre-or-worse quality food for the prices paid.

Eat This: None! There are no significant positive correlations for Yak & Yeti.

If you like Yak & Yeti, that actually doesn’t distinguish you from the “average” WDW visitor as it relates to what else you might like. But it does tell something about spots you should avoid – like some character meals.

Maybe the positive correlation here is thanks to having good chicken. Or really awesome bread products! I would’ve loved to see a grouping of all of the restaurants that have spectacular bread. I love me some carbs.

Sanaa and Boma are clearly related by both location and cuisine. They’re very different experiences, but I personally very highly recommend both. The negative correlations also generally make sense here. I’ll call out Chefs de France as an intriguing one, though. Both are intended to be authentic cuisine to their respective cultures/locations. In my opinion Sanaa does that well, and Chefs de France falters.

Do any of the correlations surprise you? Or inspire you to try someplace new? Do you have a favorite restaurant that didn’t make the list and you’d like to know the correlations? Let us know in the comments!

6 thoughts on “Eat This, Not That – Personalized Table Service Advice for Walt Disney World”